The Greatest Filipino TV Swimsuit Showdown Moments of All Time

Look back at the most jaw-dropping swimsuit scenes aired in Filipino soap operas. 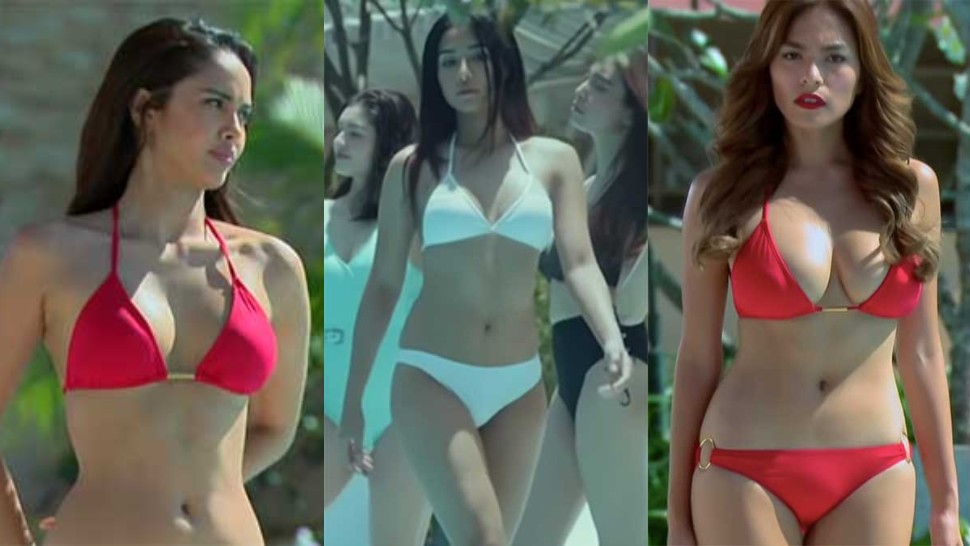 Showdowns are inevitable in teleseryes that are built around warring camps. The writers amp up the visual level of the rivalry full blast during summer when the protagonists and antagonists can go head-to-head in swimsuits. They battle out who is sexier, who is more beautiful, and who will win the heart of the man they are fighting for. That's just how Philippine television dramas are made.

In an ideal, non-teleserye world, no two women should be pitted against each other, especially using their bodies. Here, we look back at five sizzling swimsuit scenes in Filipino teleseryes. 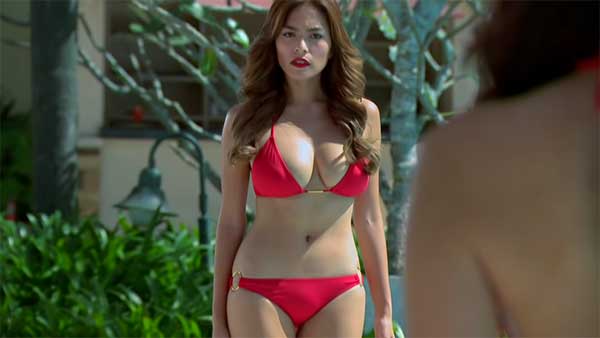 Andrea Torres and Megan Young played rivals fighting over Dingdong Dantes in the 2016 prime-time series Alyas Robin Hood. One of their first face-offs was their red bikini showdown by the pool. Based on the episode, Venus (Andrea) takes pain to prepare an outfit that will surely shock Sarri (Megan) once they see each other. 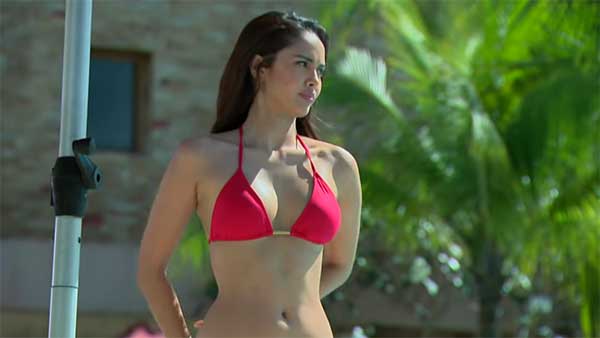 During their showdown, Venus wears a black cover-up while Sarri opts for a white wraparound. Take note: black and white, the evil and the good. At the poolside, Venus intentionally bumps into Sarri and tells her, “Akala ko kasi, poste,” in which she means Sarri has no curves. Both girls, with their backs against each other, quickly take off their wraps. When they face each other, voila! They are wearing exactly the same red bikini. Sarri flashes a smile at Venus and waves her hair to tease her rival. Venus is surprised, seeing Sarri's shapely figure and, yes, the red swimsuit.

How could Sarri have acquired that particular design when it is very limited? Sarri explains the designer is her friend who gave the swimsuit to her as a gift. Not giving up, Venus quips, “Libre pala. Makes sense.” Sarri responds with sarcasm, saying she’d rather spend her money on charity, and, addressing Venus, “Next time, kung ayaw mong may kapareho kang damit, why don’t you just make your own clothes?” Watch the full scene here. 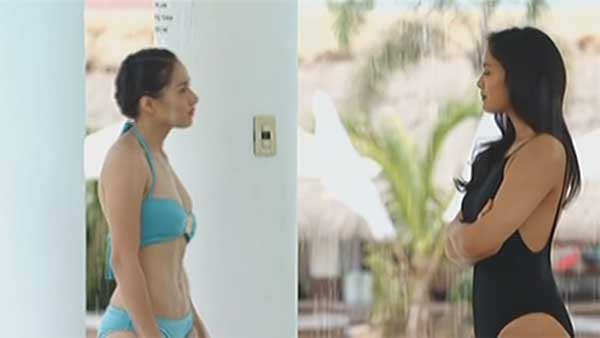 In the 2016 afternoon series Tubig at Langis, Cristine Reyes and Isabelle Daza played rivals in love with the same man, Zanjoe Marudo. Cristine is Irene, Natoy (Zanjoe) is her husband, while Isabelle is Clara, the mistress. Natoy’s family likes Clara and has invited her to join their summer outing precisely to annoy Irene. Irene has had it with Clara's presence in her domestic life with Natoy. She tells Clara Natoy never loved her. Clara then removes her beach wrap to flaunt to Irene her curvaceous body in a black swimsuit, saying this is the body that caught Natoy’s attention and got her pregnant. Irene, trying to stop herself from crying, composes herself. She takes off her robe to show her figure in a two-piece swimsuit. Irene then tells her rival, “Sa tingin mo ipagpapalit ako ng asawa ko, ako na mahal niya, sa isang basurang katulad mo na mas masahol pa ang amoy kung kumapit?” 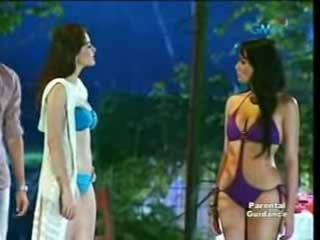 One of the most remarkable scenes in GMA-7’s 2007 adaptation of MariMar was a pool date between two couples: Angelika (Katrina Halili) and Sergio (Dingdong Dantes), and Bella/Marimar (Marian Rivera) and Rodolfo (Marvin Agustin). It was the swimsuit showdown between Marian and Katrina. 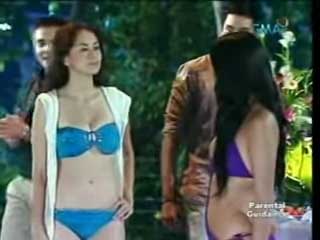 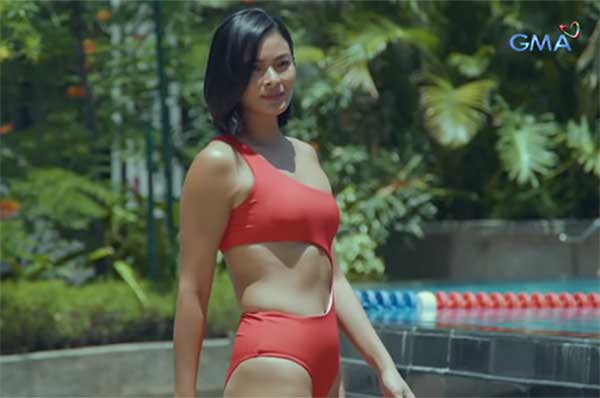 One of the most recent and trending swimsuit showdowns was that of Sanya Lopez and Maxine Medina in the recently concluded GMA-7 series First Yaya. In the scene, Lorraine (Maxine), aiming to seduce her ex-boyfriend President Glenn Acosta (Gabby Concepcion), shows up by the pool in a red-orange swimsuit. 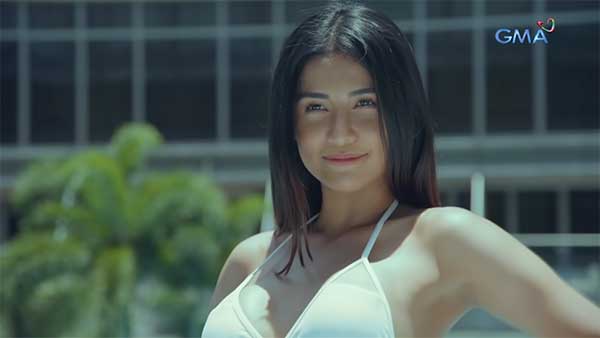 Melody (Sanya), seeing her boyfriend is giving Lorraine the eye, changes into a white bikini to flaunt her figure. To the chagrin of Lorraine, Glenn declares upon seeing Melody, “Iyan ang girlfriend ko.” 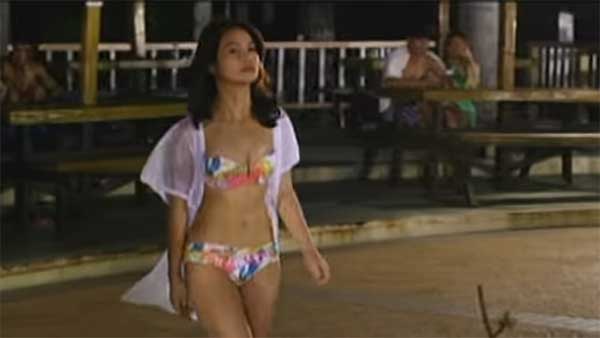 In Two Wives, Erich Gonzales and Kaye Abad played rivals for the heart of Jason Abalos. Kaye is Yvonne, the first wife of Victor (Jason), while Erich is Janine, the mistress-turned-second wife of Victor. Victor is already with Janine when they chance upon Yvonne at a resort. Yvonne has become empowered after everything that happened when she discovered Victor was cheating on her. Wearing a two-piece floral swimsuit, she is a disturbing presence to her ex-husband and his girlfriend who are taking a dip in the pool. 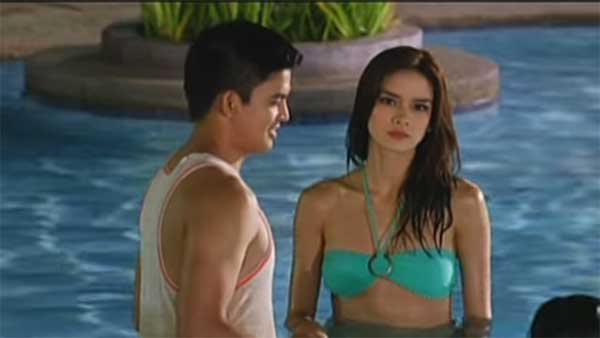 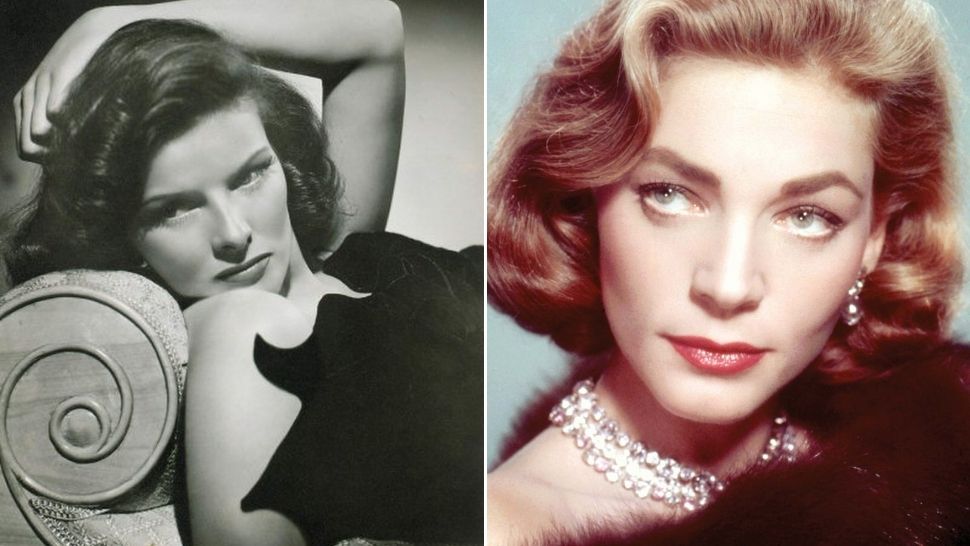 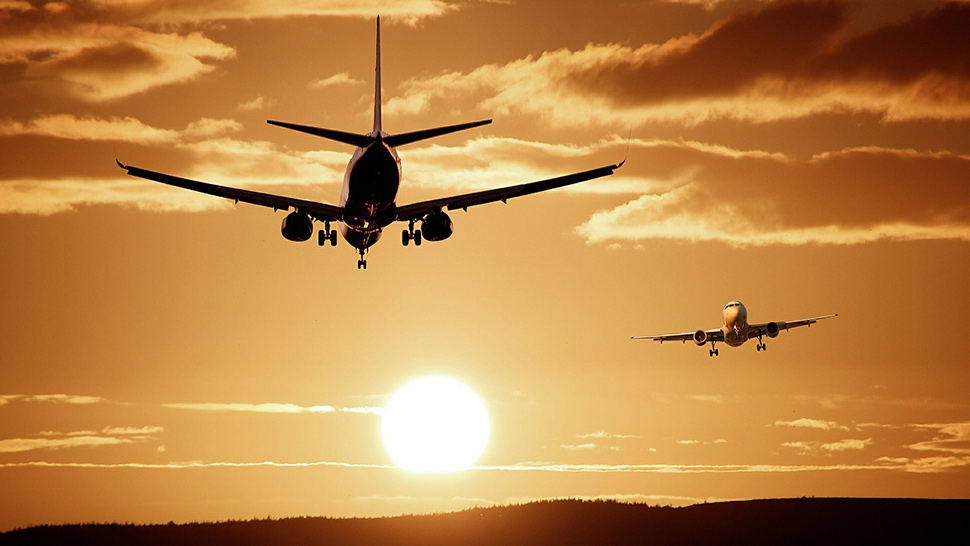