The actor, writer comedian, and podcaster on playing a hardman opposite Jason Sudeikis in Apple TV's new football sitcom, Ted Lasso, and learning from Ricky Gervais. 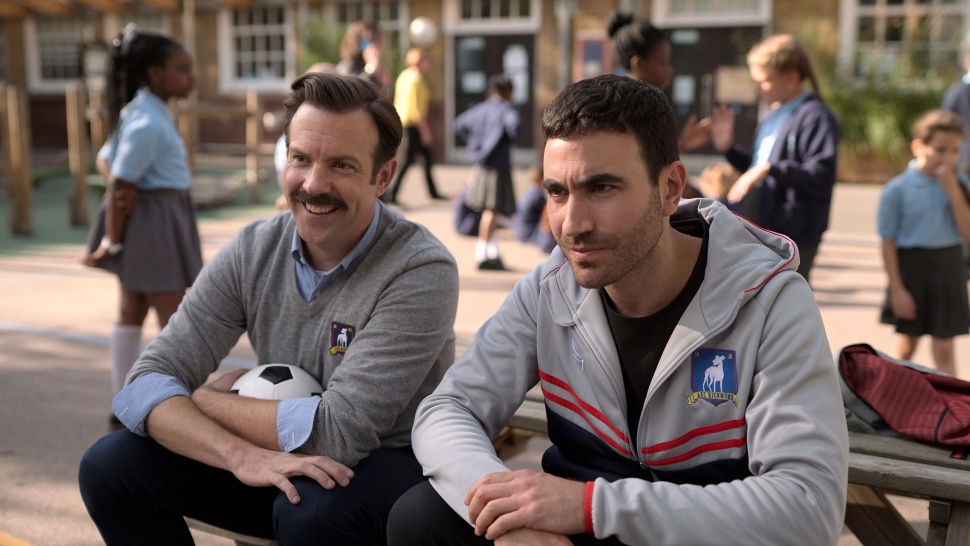 If you'd been wondering how Brett Goldstein's lockdown has been, he's spent quite a lot of it in his homemade, astroturfed bin garden. It's big enough for one-and-a-half people to sunbathe in.

"There’s room for one person, and then the other person lies on their side," he says from the flat attached to the said garden, in south-west London. "It’s a nice system, keeps you close, and gives you a real appreciation for bins. We don’t spend enough time with bins."

Despite events, 2020 is set to be a big year for the (deep breath) stand-up, writer, actor, host of the Films To Be Buried With podcast, and creator of cult film SuperBob. He's co-written a new near-future-shock series, Soulmates, for AMC in America (which will be landing in the UK in the autumn), but before that there's Apple TV's new, Zach Braff-directed sitcom, Ted Lasso, in which Goldstein co-stars and also helped write.

It's about the titular Ted, played by Saturday Night Live and Booksmart's Jason Sudeikis, an American football coach who pitches up at a fictitious Premier League side, AFC Richmond, to try and turn the club around. Unfortunately, being the wrong kind of football coach, he doesn't know what the offside rule is and his squad despises him.

(If that rings a bell, it might be because something similar happened to Chester City; gridiron coach Terry Smith bought the club and installed himself as manager despite having never worked in football. He confused everyone and then sacked himself. Goldstein's not seen the accompanying fly-on-the-wall documentary, An American Dream, as yet.)

Ted Lasso is funny, and warm, and shakes off decades of shoddy football-based TV shows which manage to get the actual ball-kicking side of things so badly wrong. Goldstein plays embittered hardman Roy Kent, who is definitely not Roy Keane. A legend, and once a champion, the Richmond captain is now perpetually furious with his self-centered teammates, clueless manager, and looming obsolescence.

Kent, like the rest of the Richmond squad, eventually starts to take to Lasso's methods and drops the bites-yer-legs schtick. Or, at the very least, he hates Ted slightly less.

"He’s Bill Sykes, if Bill Sykes had a heart of gold, and wasn’t a murderer. If you take that out of Bill Sykes, you’ve got lovely Roy Kent."

Goldstein, on the other hand, speaks to Esquire with a massive framed Muppets poster on the wall behind him. There is no clearer sign of a pure heart.

"That’s my ultimate goal, is work with the Muppets," he explains. "I do that, then I’m dead."

Tell us a bit about Roy Kent. How many letters of his surname did you have to change to make him legally not Roy Keane?

So Roy Kent—who is not based on anyone—is the aging captain of AFC Richmond. He used to be a big star, was a Champions League winner, but that was seven years ago and now his knees are not his friend anymore. He’s well aware he’s got two years left in him, maybe. At the beginning of the season, I think he’s a depressed man who’s gone into himself, because he’s with a mid-table team surrounded by no-one that impresses him. He’s like an old dog, and then Ted Lasso arrives, who’s like a clown. And he thinks, 'Oh fucking hell, is this it? I go outcoached by a clown. This is bleak.' That’s the starting point.

He’s a very angry man. But you also see he’s not a bad man—he just can’t express his emotions very well. And what was cool about playing him is you have 10 episodes to slowly break his armor, and Ted eventually gets through to him.

How much actual footballing did you have to do on set?

More than I’d hoped. What was quite interesting was, in the beginning, there was always this thing of well it’s not really about football it’s about the team and the team being like a family, but actually, it is also about football. We had boot camps with [former Charlton Athletic and England defender] Chris Powell, who was the [football] advisor. There are set-pieces in the show that are choreographed, and we’d have football rehearsals where we’d practice these dances of set pieces that would then take 25 takes to get right. But most of the actual team are semi-pro players, so it was really the main cast having to do their best to fit in, and then when they couldn’t, grab the double.

If it had been a straight choice at 18 between comedy career and football career, what would you have picked?

Footballer. Of course. We were talking about this the other day: in America, I think most actors wish they were rock stars, but I think in England most people wish they were footballers.

What did Zach Braff bring as a director?

I think everyone in the team is a big Scrubs fan, so everyone was genuinely very nervous, but he was great, he was lovely. What he did that changed the look of the show as we had this ground where we played football, but they had to protect it, so we couldn’t put cameras on it. Zach Braff invented, with two of the crew, a sort of giant-wheeled almost tractor for the camera that would be really light and didn’t affect the grass. So now we have all these cool shots, running shots, everything looks really dynamic. It was all because of Zach Braff. When it goes [Goldstein makes zooming noises], it’s just people riding on tractors.

"I was in New York when they had the massive blackout. It was like the end of the world."

Ted Lasso's all about the UK-USA culture clash, and you've lived in New York and LA. What was the biggest culture shock you felt?

I was in New York when they had the massive blackout—all of Manhattan blacked out. It was a year or two after 9/11, it was pre-smartphones, and everyone thought it was a terror attack. It was like the end of the world. They shut down the tunnels, because there were no lights, so Manhattan became an island. Fridges were melting into the street and there was this whole sense of: oh shit, we really need electricity! It was a heatwave, and there was a panic, no-one was explaining what was going on. I was staying in this hotel on the 29th floor, and I had to walk in complete darkness up 29 floors. When I got to the corridor, everyone was having sex in the corridor. That’s what happens when people think the world’s ending. It was actually quite a lovely thing. They don’t all start fighting—they start fucking. It’s beautiful.

Did you notice any differences between American and British comic sensibilities in the writers’ room?

Yeah, I’ve written this other show for AMC [Soulmates] and that’s set in America, and one thing me and [co-writer] Will Bridges found was that we wrote characters not saying how they feel all the time. That is British. We don’t say: 'I feel sad because of this and that!' We’d often get notes saying, 'These scripts are very subtle, and I want them to say what they’re feeling.' We resisted for a bit but then when you watch American TV and spend time in America, everyone’s far more expressive. That is real. That isn’t an invention of TV. So it’s something we have to remind ourselves every time we write, because we’d put it in a stage direction—“He sits with that feeling and feels sad” or whatever—but they have to say these things. So in Ted Lasso, which is an American show but set in the U.K. and most of the cast are British, I think that’s what’s interesting and what was a risk and what worked: there are two sensibilities. The British tend to be wryer and more sarcastic and downbeat, but they [Americans] get it. Ted is a big, open, funny character, and Roy is so closed and everything’s more internal. Maybe that’s it. Internal and external.

Tell us a bit more about Soulmates. It sounds like a slightly less bleak Black Mirror.

It’s an anthology series, six episodes, but they’re all set in the same world. It’s our world, 15 years in the future. Not much has changed but science has found physical proof of the human soul, and there’s a test you can take that will tell you 100 percent, scientifically, definitively, will show you your soulmate. At the simplest level: if you’re single and you take this test, then great; if you’ve been married 15 years, and happily, but there’s this test that tells you this person isn’t your soulmate, do you want to know?

One of your early TV credits was Derek. What did you learn from Ricky Gervais?

On my first day I was quite nervous—big fucking deal, working with Ricky Gervais, and it was my first big TV job—and I did take one, and he said, “Perfect! Let’s move on.” I was like, what? He went, “It’s great, we got it.” Don’t you want to see something else? And I think he said, “I trust The Force: it looked good, felt good, I liked it. I don’t want shitloads of options in the edit. I trust it, let’s move on.” That’s really inspiring, and sometimes I’m like that and sometimes I’m not. At some point, you do just have to trust, because you can drive yourself insane.

How does doing an online stand-up gig feel?

I avoided it for so long. Always Be Comedy [a much-loved night in Kennington] is the best gig in London, and the guy who runs it, James Gill is amazing. He started an online one and asked me if I’d do that, so I did. He’d actually worked out how to do a front row, so you had [audience members] on the Zoom, and they were miked up so you had the sound of 10 people laughing and you could interact with them. It wasn’t bad, and I did get a little buzz from it. It was something. 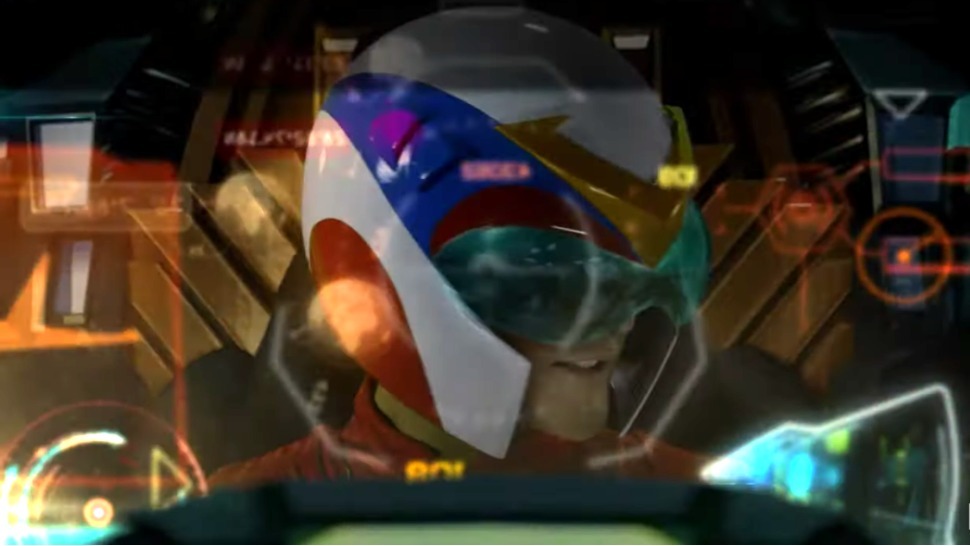 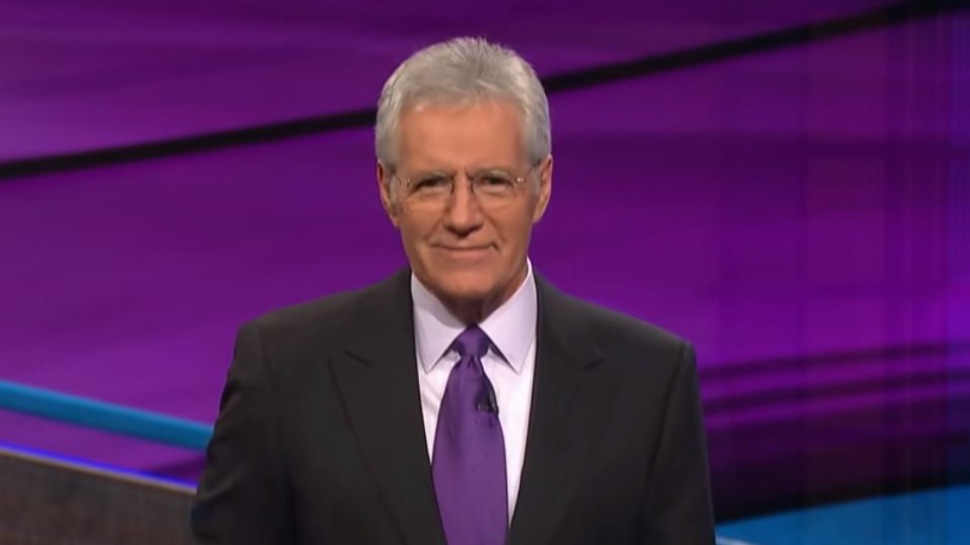