Different artists have different relationships with inspiration. Some can summon the drive to create at will; like the early Beat poets, who would sit down at the typewriter to produce volumes of stream-of-consciousness verse like possessed men. Others hold hands with their ideas—from germination to full fruition—like the writer-musician Leonard Cohen, whose most popular number, the five-minute-long “Hallelujah,” took him five full years to complete.

Michelangelo painted the Sistine Chapel ceiling for four years; though with its painstaking detail, it’s easy to understand why. What first-time creators have dealt with since time immemorial, however, is the dreaded sophomore slump.

Painter Sal Ponce Enrile comes to grips with this a mere two months after her first ever solo show Awakening, which was also her public unveiling as an artist.

“I was really floored by the tremendous reception Awakening got,” she says, sharing how most of the collection got sold by night’s end, and completely sold out shortly after. The erstwhile musician and once-legislator, by all intents and purposes, came on strong, putting on display north of sixty pieces done in varying styles under the abstract expressionist idiom.

For a first attempt to channel her instincts into actual artistic production, perhaps Sal’s great accomplishment was doing so to the fullest, in both quality and quantity. “As I said in the weeks leading to launching Awakening, I felt like a dam in me suddenly burst. You know what I mean?”

The low-key, by-invite-only affair was attended mostly by friends and family, but the presence of supporters from the art world was a telling portent. Among them were Rodel Tapaya, a painter who’s exhibited in Berlin, New York, Tokyo, and Beijing, and whose works can be viewed as retellings of everyday folk reality; as well as Marina Cruz, whose works done in the minimalist abstraction vein have garnered widespread acclaim, and whose meta-heavy paintings depicting textile and tapestry display a restlessness within. One can imagine the breadth of artistic languages Sal is exposed to both as silent observer and discreet new practitioner. 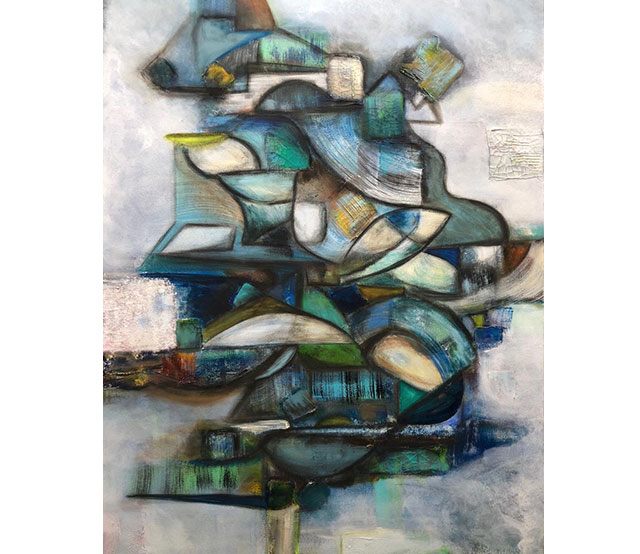 And if previews of post-Awakening works of hers (the highly textured “Untitled,” the beautifully meandering “Conflict”) are any indication of what lies ahead for her art, it’s clear the dreaded sophomore slump should be of no pressing import or concern.

“I have some new ones already in the bag,” Sal says sheepishly, sharing how she had to first accommodate requests for pieces similar to key works from Awakening before setting her sights on a new collection.