When its album Closure was released in 2017, we thought we’d seen the last of ‘90s Pinoy dream pop band Sugar Hiccup. Closure was, in a manner of speaking, the band’s swan song; an album containing material from decades ago but never made it to previous releases, as well as new tracks written specifically for the album, and then performed live in front of an expectant audience one memorable December evening.

Sugar Hiccup first rose to mainstream popularity in the mid-‘90s with its landmark single “Five Years,” a slow-burning, haunting musical soliloquy that has vocalist Melody del Mundo humming at the beginning of the song and wailing towards the end. Wrought with emotion that builds up over crescendo patterns, it ironically has no decipherable lyrics except for this line: “But he will never be back.”

1998 saw the release of the album Womb, whose carrier single of the same title became yet another song in rotation on the playlist of the now defunct rock radio station NU107.

Del Mundo migrated to the United States in 2001 to start a family. Sugar Hiccup had two reincarnations in her absence, with two different vocalists. In 2015, Del Mundo and two of the band’s other founding members—guitarist Czandro Pollack and drummer Mervin Panganiban—began recording the material for Closure.

It wasn’t easy. In some scenarios, Del Mundo, who resides in the US, would send demos for the guys to study. Pollack, Panganiban, and Prank Sinatra’s Iman Leonardo—who assumed bass guitar duties for the album—would then add their musical input to the audio files. They exchanged ideas, riffs, bass lines, and drum beats online. 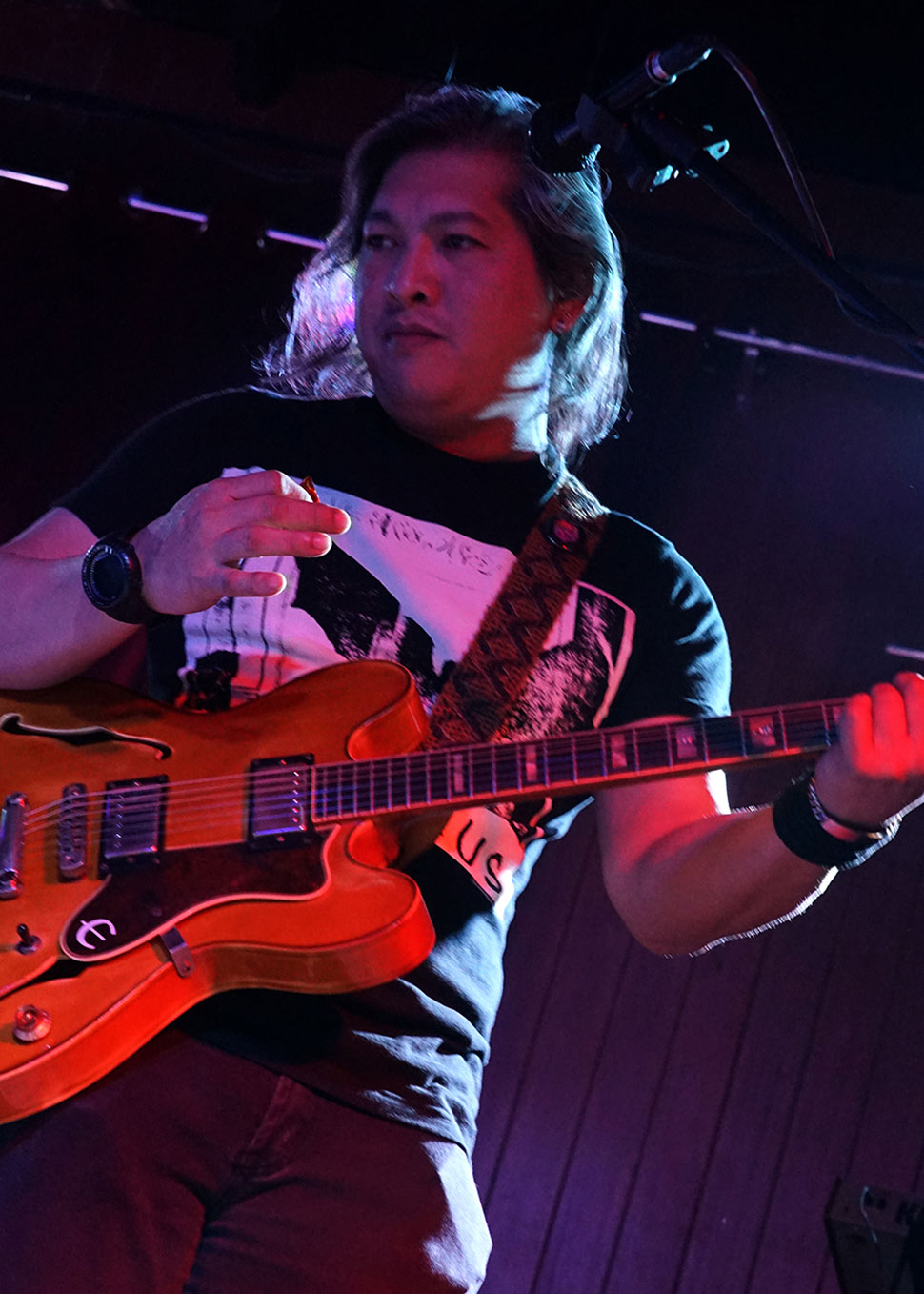 For now, Closure is presumably the last album we’ll ever hear from Sugar Hiccup as a full band setup. And for fans who missed the launch two years ago and did not get a copy of the CD, there’s hope for you, yet. Del Mundo will be reuniting with Pollack this June for the release of the same album, but this time on vinyl.

In an exclusive interview with Esquire, the two founding members answered questions about the record, the status of the band, and the probability of hearing more new music from Sugar Hiccup.

When you released Closure in 2017, you gave the impression that it would be your last hurrah. Was it, really? Has your perception changed?

Melody: Yes, that’s right. Our last hurrah for an album, performing and being a band altogether. However with the fruition of the vinyl, we thought that we’d get together just to celebrate it. We originally planned to produce this vinyl but wasn’t really sure if it was going to happen. With Closure as our last hurrah, the vinyl release is an extension of that. We are proud of it. A get-together was just appropriate for the occasion.

Czandro: Apparently it is. The band bade farewell. Nonetheless, Melody and I decided to encore (the band) in an unusual fashion, that is to release a record, a legacy, if I may say so. And that truly is the last hurrah. 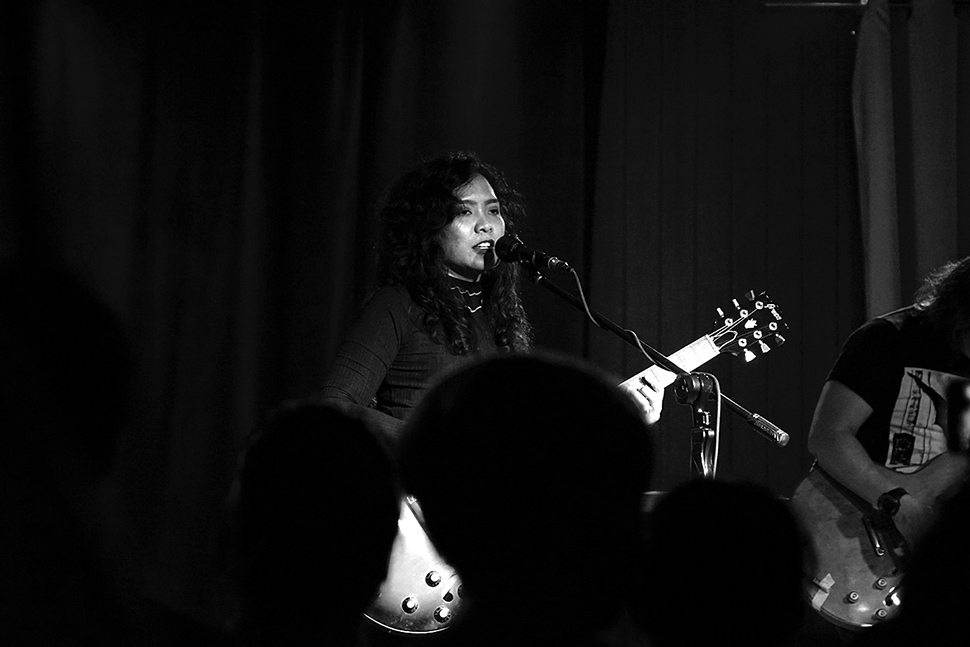 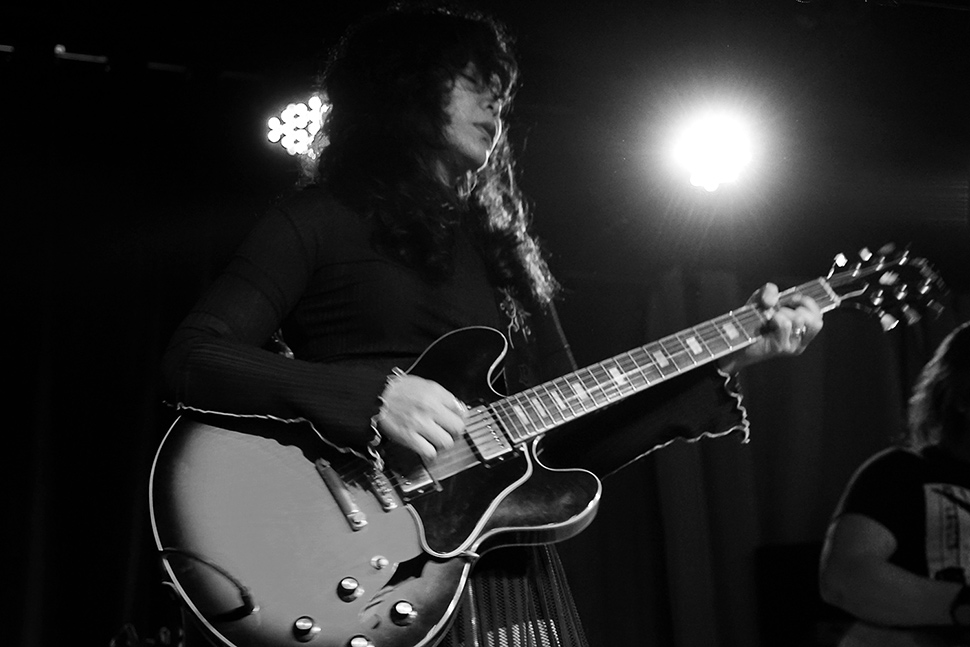 Kindly update us on where and how Sugar Hiccup is now. Are you still a band, officially?

Melody: We are no longer a band, maybe just more of a partnership now. Czandro and I might delve into projects in the future if time permits. We have enough material to come up with another album if we’d like to pursue it. We might still carry the band name, however it might just be more of a collaborative project between us two and perhaps inviting other artists to contribute their talents. We don’t know yet, but that’s a possibility.

Czandro: Officially, the band is no more. But who knows? If we’re still alive after a decade or two, we might have another reunion, if there are people who will still appreciate us and our music.

Why did you decide to release Closure on vinyl, and who made the decision?

Melody: Czandro and I pursued a vinyl album of Closure because the CD sales of the album allowed us to fund it. We both agreed that with the band’s reunion and disbanding at the same time, this is a culmination of that “closure.” This is a footprint that we’re leaving behind for those who supported us throughout the years, those who loved our music, and to those who continued to believe in us 25 years after we first came out in the Philippine music scene. We have a dedicated cult following and we are very grateful for that. This is our gift to them and we know they’ll appreciate it.

Czandro: As mentioned, the record is our last hurrah. Melody and I decided on it, also, it’s quite a profound legacy to remember us by. 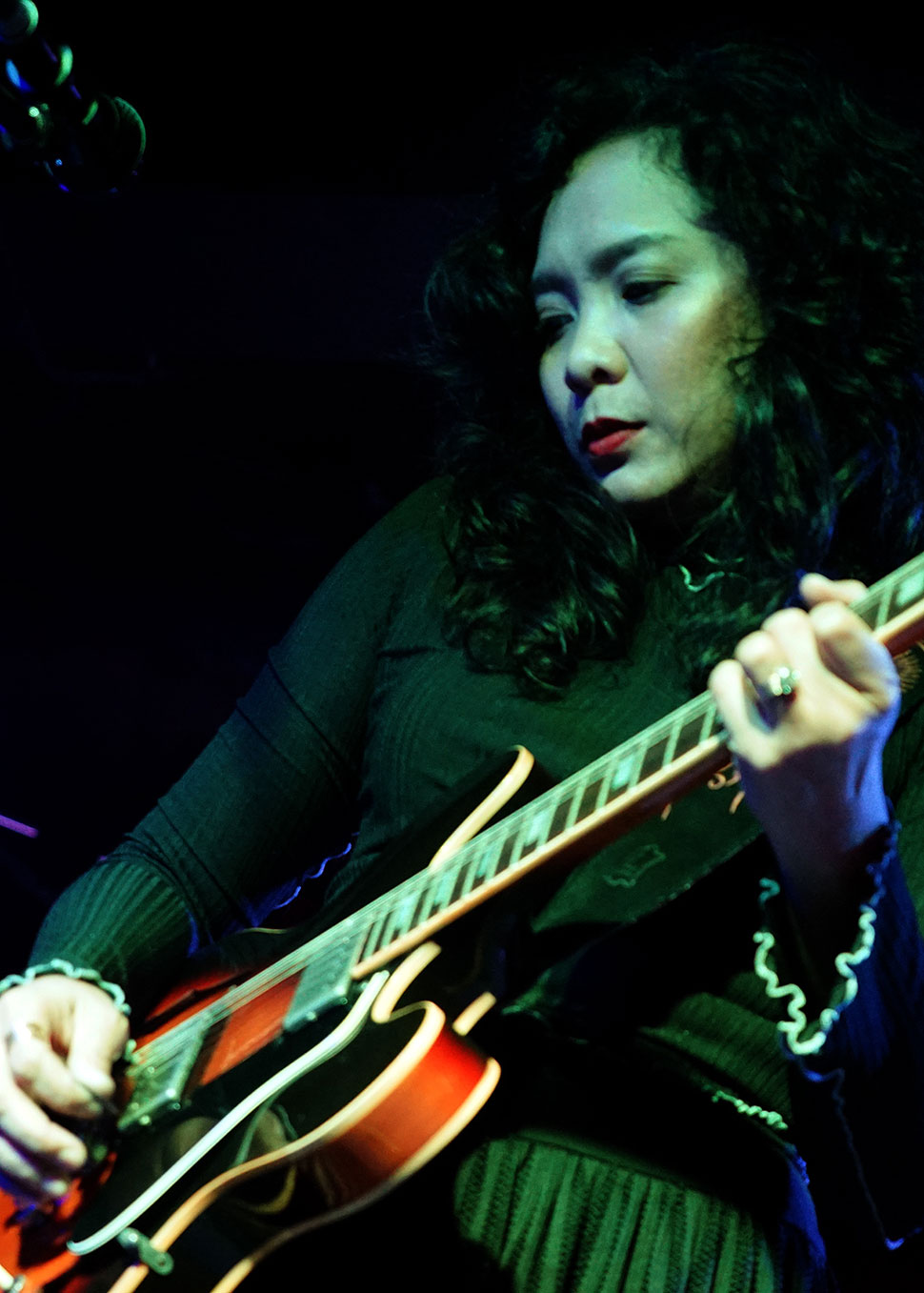 Tell us about the record and the process of making its release possible. How many copies will be available?

Melody: The production of this vinyl is really something that Czandro and I worked on together, with the help of Ron Francisco who’s also one of the album’s producers. We did this on our own. We found a great record studio in Columbus, Ohio that’s been recording and pressing vinyl records since the 1960s.

This quaint little studio continues to press and master records as it did 50 years ago. They’re still working with the same equipment they had back then and they’re still hand-pressing vinyls, so it’s very personal. They are wonderful to work with. They have different packages and various options to select from. That’s also why Czandro and I came up with the colored vinyls.

Aside from the usual black, we have transparent magenta and transparent gold that represents the hues of our album cover. We also came up with just a few gold splatter vinyls that will either have black streaks or splash on them. There are just 50 copies and no two vinyls are alike. We are only releasing 275 vinyls total.

We didn’t see the need to start off with a higher number. We know that we don’t cater to a large mass and we are happy about that. We also believe this is what our serious followers love about us, too—that we have remained modest with our music and stayed low-key on our ground. Should there be a need to produce more vinyls in the future, we can revisit that. As you can see, these are very limited copies that’s why this is very special. We will only be selling the vinyls at each of the venues of our launch dates including one in Cebu. After that, we will just be taking orders through our FB page and we can ship anywhere in the Philippines, the United States and Canada.

Czandro: It wasn’t easy. The process, the design, the long wait, and anxiety it gave us during the shipment, not to mention the funds. In fact we couldn’t do it by ourselves. None of these would be possible if it weren’t for the help of family and friends like Melody’s brother, Marcel, Ron Francisco (Monopond Recording Studio) and his family who fully supported us along the way.

The vinyl is very limited. 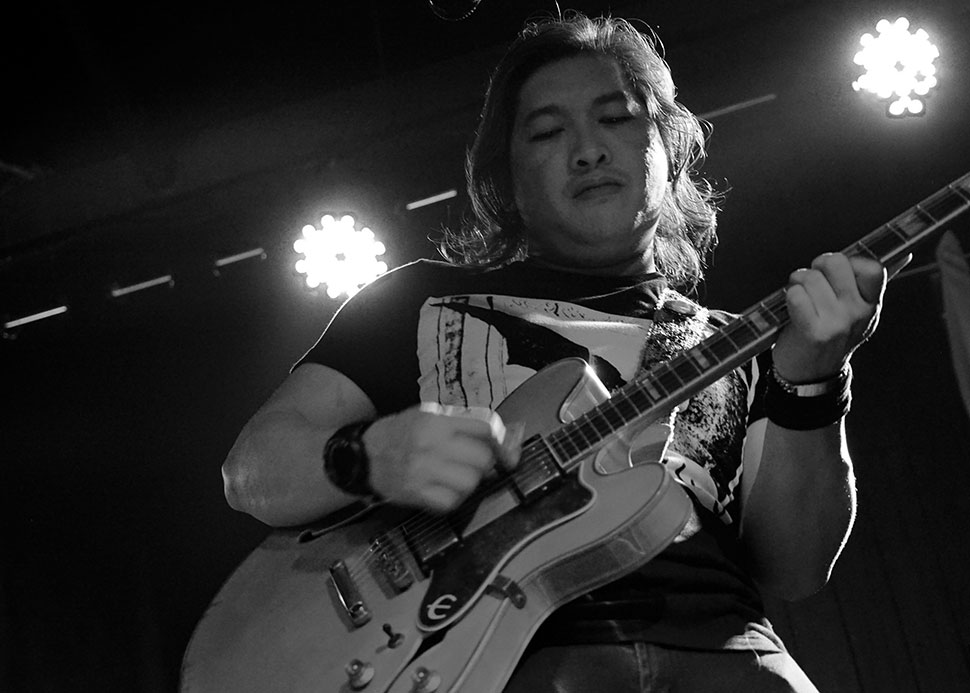 The launch of Closure in 2017 was pretty big. Will the vinyl launch be as spectacular?

Melody: As mentioned, this is just a get-together. We just want to celebrate the vinyl release so it’s not something grand. We were not planning on playing but since I will be in town, why not? We will play a short set and we will play acoustically. We just want to get the vinyls out there to those who’d want to get their copies and to personally thank them for supporting us.

Czandro: The vinyl launch may or may not be as big as the Closure album launch—no expectations—but it’ll be more intimate.

After the launch, do you think you'll still be making more songs or playing gigs?

Melody: We have a few songs that we have already recorded that can potentially be on an EP if Czandro and I would like to choose that route. However, we are looking at possibly releasing Oracle on vinyl first. We’ll see where this closure takes us.

Czandro: Perhaps, but not as Sugar Hiccup.

Closure is a gem, and a rare one at that. Its release on vinyl is reason to celebrate for the band's loyal fans and for record collectors. If you want to secure your own copy and to hear Melody and Czandro perform songs from the album such as the “Saturnine Nevermore,” “Dolour,” and “Silly,” catch them on these dates at the following venues: June 1 at 70s Bistro, June 8 at Mac Restobar in Cebu City, and June 11 at Route 196. Who knows, you might even get a chance to see them perform some of their '90s hits.