The Key To Great Filmmaking, According To Pepe Diokno
Culture

The Key To Great Filmmaking, According To Pepe Diokno

It’s about having an insatiable hunger to tell a great story, despite the struggle.
CREATED WITH YELLOW CAB PIZZA CO.
Oct 20, 2017
Shares
Share
Tweet

Filipino cinema, in its current renaissance, has allowed us to discover more of our identity through the films we make. Through the lenses of numerous local filmmakers, the stories of our people can be told, and we benefit with a clearer picture of our culture.

One of them is Pepe Diokno, grandson of the late statesman Jose Wright Diokno, and one of this generation’s brightest young filmmakers.

His first full-length feature, Engkwentro (released when he was a 21-year-old undergrad at film school) continues to be relevant, long after its run in the 2009 Venice Film Festival and the 2010 Jeonju International Film Festival, where it won multiple awards.

Engkwentro tackles a difficult issue, but the story was one Diokno was ready to struggle for. “I was hungry to tell a story about people being killed,” says Diokno, referring to the social realities upon which his debut feature film was based. And because it was a politically charged film, he had to deal with some backlash from a disagreeing audience. “It got really polarizing—on one hand, people really loved it, on [another], people really didn’t.” Engkwentro had its detractors, and at 21, Diokno had to bear the brunt of it as director. It’s the price he had to pay for making such an illuminating, visceral work of art.

“I gravitate towards difficult stories because I like to challenge myself,” says Diokno. It’s apparent in Engkwentro, and also in his succeeding films: Above The Clouds, which is about an orphaned teenager and his estranged grandfather embarking on a journey to overcome their grief; and Kapatiran, which is about Filipino fraternities. “I don’t like to be comfortable,” he says. 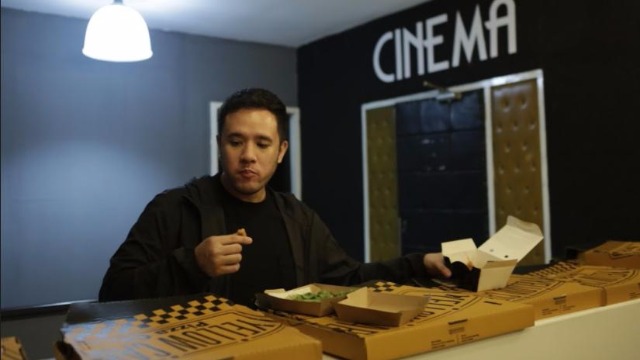 But Diokno’s proclivity for social realism and his drive to push beyond his comfort zone aren’t the only things that define his identity as a filmmaker, and they aren’t the core reason behind his success in both local and international scenes. He believes that it’s something deeper than that—something that every great filmmaker must have, regardless of genre and style: the hunger to tell great stories. “What fuels my storytelling is this love for who we are as Filipinos,” he says, “and this quest to question everything that’s happening around us.” Exploring these through film is his way of satiating that hunger, but he knows that like every great artist, he’s always going to want more.

Follow Yellow Cab on Facebook as they reveal new stories of struggle, hunger, and success each day. Don't forget to check out #FuelTheHungry and #NoStoppingTheHungry on social media, too. Hungry? Order a pizza here.