On her sixth solo exhibition. 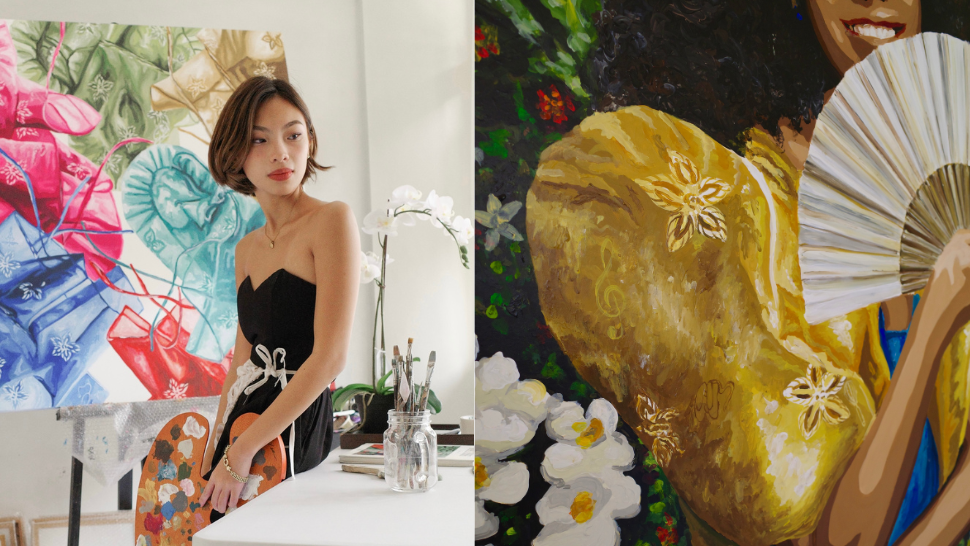 "Whenever I see the Philippine Terno nowadays, I always remember a quote that I’ve read from one of my favorite books," explained Anna Bautista, talking about the concept behind her sixth solo exhibition Redefinition.

"The ever-evolving Terno serves as a reminder of the Filipinos' resilience and adaptability in the face of inevitable change and evolution. The Terno is not a mere costume, but an intersection of history, fashion, religion and most significantly the ever-evolving journey of the Filipina."

It comes from Gino Gonzales and Mark Lewis Higgins' seminal 2015 Fashionable Filipinas book. The work is a retelling of the evolution of the ensemble, and how it was bred by the Victorian era, wars, haute couture, colonialism, and liberation.

The Philippine Terno, along with the idea of a Filipino woman's place in a contemporary world, is an ever-changing, evergreen subject that is always on the cusp of being rewritten. And it is with artists like Bautista, that it gets its, well, redefinition.

The artist thinks of the Philippine Terno as a suit of armor. As a visual device, the iconic dress encompasses conceptual, artistic, and social realms. From its flattened and peated leaves to the camisa and, traditionally, the pañuelo and tapis, each Terno possesses a certain temperament entirely its own. That's what makes it such a compelling vessel.

A glimpse of Bautista's Redefinition exhibit at the Leon Gallery in Makati.

Some of Bautista's studies for the exhibition.

For Bautista's reimagining, her "Maria Claras," if you will, flaunt their wings with all their might, built for flight, as a homage to their constant progression. Her modality and iconography floats out of this idea, riding the relationship between time, culture, and philosophy. "Specific visual elements were ‘sewn’ into the cloth of the modern Ternos in the artworks," she noted. "If one looks closely, each of the blouses contains motifs for the following fields such as faith, medicine, culture, and more."

"In the simplest sense, I want to express how far we’ve come along as women as compared to how we were depicted in our elementary textbooks."

When we think back to some of Bautista's earlier works, such as "Lemon Vuitton," "Mango Miyake," or "Gucci Apples," we know these to be critiques of materialism and excessiveness through fruit, vegetation, and vibrance. In Redefinition, on the other hand, she assesses the expression and identity of Filipino womanhood.

Bautista describes this progression and segregation of space as "the application of patches of color that build up to a bigger picture," and says it is similar to how she perceives life. "It's an amalgamation of incremental moments and experiences that make up time."

All 22 of the 24-year-old's works, including their studies, are carefully archived. Look at a painting like "A Woman in Medicine" and we're confronted by Bautista's bright and austere shapes. Our eyes are first drawn to the Terno and its harmony with the richness of the depth of browns in the figure. Then we take a long pause for the Terno. For this particular piece, we see references to the medical profession embedded in the ensemble, like the caduceus insignia.

In "A Woman of Culture," we see much of the same play of elements, from mood and color to texture and grading. This work is adorned by images of ballet shoes, an artist's palette, and a G clef, playing the role of a patron of sorts.

"A Conversation between Science and Religion" (2022) by Anna Bautista, Acrylic on Canvas.

Symbolism, suffice to say, is a common theme in her Ternos. These works are a masterclass in space manipulation and anatomical dissection, too. The flora in the backdrop linger around to further emphasize the subjects. These women are soberingly shy, traditional, and noble yet are rooted in the spectacle of modernity. Our eyes are comforted by negative space, with these elegant pamaypays leading our gaze.

Just as important to them are the space around them. "I believe an artwork’s story or rationale is equally as important as a piece’s aesthetic components... But I don’t think the work ends in painting," she said of her creative process. "A lot more goes into it, something I’ve learned over the years. One of these is that the spacing and lighting of the artworks during its installation are as important as the artworks themselves."

In a grander sense, elevating the figures can also mean elevating the discourse that surround the Filipino women and societal convention. It's about combating stigma, as well.

On a more personal level, however, Redefinition is a celebration of the women in Bautista's life. "I was very fortunate enough that I grew up in a house full of working women, who all inspired me and showed me that women can—and are even capable of leading in the workforce or any other field they would choose to be in despite society’s challenges."

Art, of course, can be the perfect theater for representation. Bautista's showcase chronicles such. The exhibit is a reclamation of destiny in some ways. These pieces are an exploration of "who ‘she’ is or could be," she stressed.

"The modern Filipina is strong. She is free to be. She will not be defined nor be hindered by her gender. She is empathetic. She is determined. She is kind. She is hardworking. She earns her keep. She is ever-evolving."

One of the most important women in Bautista's own life and a catalyst for her creative expression was her grandmother, Lili, who would take her to museums as a young girl. She would soon rediscover these childhood memories as a 16-year-old visual artist and she's never stopped painting since. This, we can argue, is just as powerful a part of Redefinition as any of the Ternos' messages. It's an exhibition by a modern Filipino woman for the modern Filipino woman. 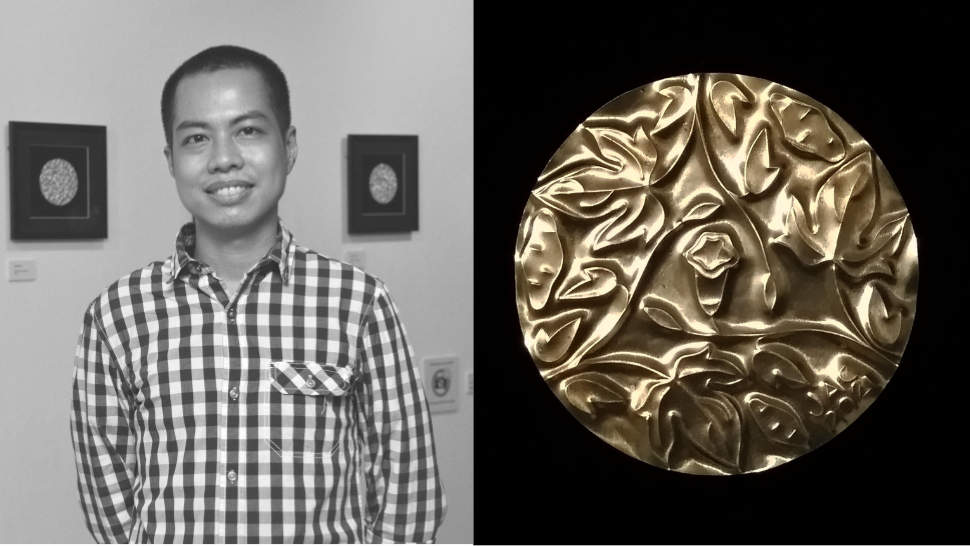 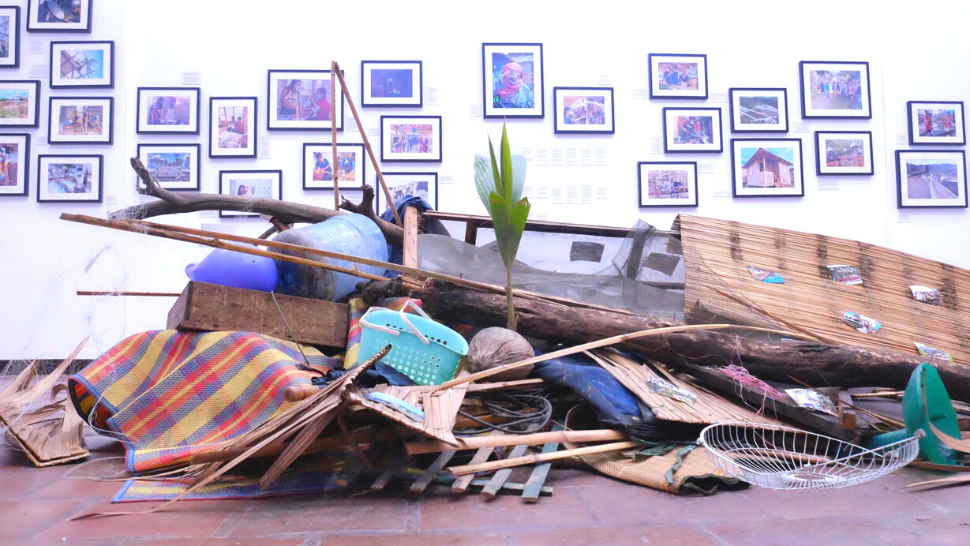 This Typhoon Odette Photo Exhibit Captures the Beauty in Collectivism 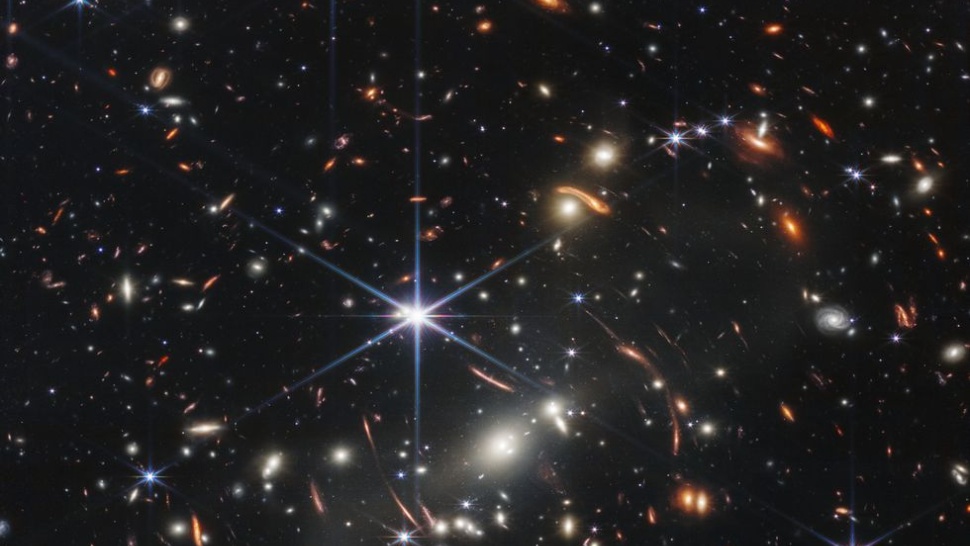 Now NASA's Shown Us the Universe's Beginning, Want to Read About How It Ends?
All Photos
Comments
View As List