This Artist Transformed Turbulence into Inspiration 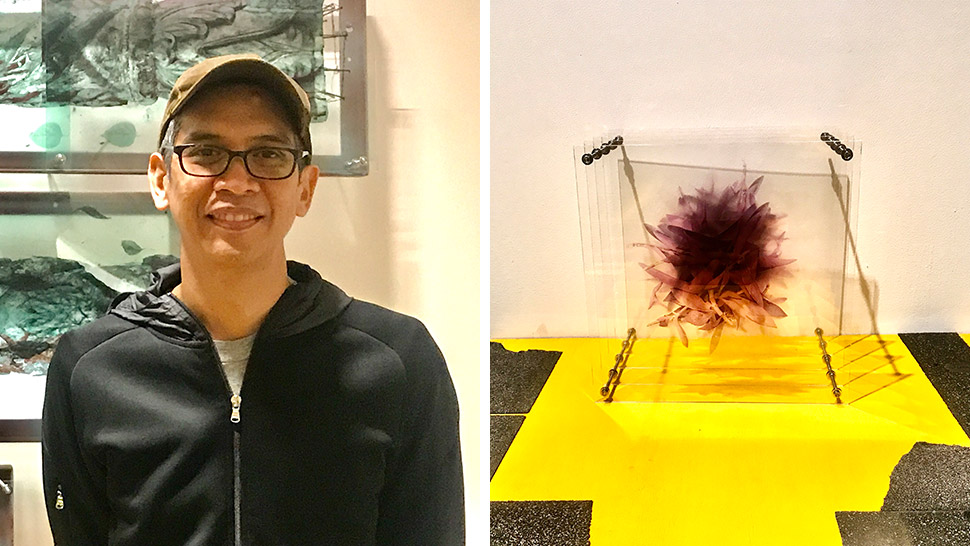 He learned to temporarily evade the turbulence by taking solitary walks to give him the strength to face the challenges of each day.

At first it was like an escape, then it became meditative,” says Zamuco. It was during these hikes that he came across castoffs tossed out by others, as well as debris from nature. Disfigured sculptures, rusty nails, dried leaves, lichen on rocks.

“I encountered these objects in my usual routes and they were broken, in-midstream decay, or discarded. I realized these objects were metaphors for dealing with difficult circumstances,” says Zamuco. “They just present themselves and you’re left with the task of dealing with them, fixing them, redeeming them.”

"Cosmic Grounds" is on exhibit at Silverlens Galleries.

What was riffraff to others was to Zamuco, fragile beauty. He salvaged these mundane objects and brought them home to his studio. The result: thought-provoking works in an exhibit “Cosmic Grounds” at Silverlens Galleries.

A series of photographs of dried leaves denotes the passage of time.

Rusty nails on weathered planks of wood and discarded roofing were among the refuse artist Eric Zamuco found during his solitary walks.

A protective suit to lessen a patient's exposure to radiation is one of the emotionally moving pieces in the exhibit.

Photos of objects ravaged by time.

"To the artist, coming across these objects felt almost fated, an uncontrollable event reminiscnent of the unpredictability and frailty of our own bodies," writes Arianna Mercado, the artist's niece, in the exhibit notes. She describes the works as "a testament to the renewing process, one that does not aim to restore fragmented objects, but acknowledges the passing of time and an inevitable decay."

Janice Legaspi Zamuco, a physician, describes her husband's works as very personal. She says they "invite the viewers to share in what he has made of the things/circumstances he has been given."

"This exhibit reminds me of God's hand on us the last few years–how He allowed us to be 'broken' and changed, giving us the privilege to know Him and depend on Him in a new way," she says.

A defaced wooden heron found by the roadside is given a second chance at flight.

Zamuco found this termite-infested pillar in his in-laws' home. The carved image of a child at its base is quite haunting.

The artist filled the hollow of this discarded stained vase with a photograph of lichens he discovered on rocks.

A beheaded sculpture of a supplicant on a plank with rusty nails eerily reminded us of victims of torture.

Everything You Need to Know About Art Fair Philippines 2020