In an ordinary year, the Art Fair Philippines would be over by now. It would have been a glorious, in-person exhibition in which top artists transformed a parking garage in Makati into a breathtaking cultural space. It would have shocked and awed and inspired.

But these are not ordinary times. Instead of a spectacular showcase at Makati’s multi-level The Link car park, Art Fair Philippines 2021—its ninth installment—has moved online. Instead of the accustomed February date, it’s happening from May 6 to 15, when, no doubt, it will continue to shock and awe and inspire.

After all, artists are nothing if not adaptable. Capitalizing on its newfound online platform, Art Fair Philippines will be setting the virtual stage for digital art and, to ease into this transition, it has once again partnered with Globe Platinum to create an enhanced experience. More than co-presenting the ArtFairPH/Film public exhibit, Globe Platinum is hosting an exclusive Art Film Weekend to treat customers with the extended works of critically acclaimed digital artists.

Guy Oliver, a London-based artist who, last year, was named one of two recipients of the Jerwood/FVU Awards, will be showing The Year Everyone Died (2021). The meditative video essay explores the artist’s feelings towards the numerous deaths that occurred in 2016. Through his usual style of inserting British humor and references in an otherwise serious issue—in this case, mortality and memory—Oliver also integrates his personal losses, not just in terms of physical death but in politics and culture as well.

Petra Cortright, on the other hand, continues her signature style of employing computer software to create mesmerizing animated collages where she can be seen composing each meticulous layer. Her feature for Art Film Weekend will be Garnet Glycerine GSMCRK and other short stories, a set of digital paintings where Cortright opens a painting file, runs a Photoshop script by Carl Tashian, and screen-records the entire process where the script runs through the layers of her every brush stroke.

Painter and self-taught new media artist Jeremy Couillard has three contributions to the festival: HOTR Home Furnishing (2019), Suite for Absynth in D minus USB 1008 (2017), and Voluntary Associations (2020). All three underscore his penchant for video game imagery and virtual reality, as well as ideas surrounding dystopia and utopia.

Also playing into the theme of world-building, Keiken, a collective of three artists Hana Omori, Isabel Ramos, and Tanya Cruz, is showing two works—Battle Reality (2021), which is a CGI film posing as a game where players navigate a new, decentralized system, and Feel My Metaverse (2019), which was created with George Jasper Stone for Jerwood Collaborate. The latter is another CGI output that shows humans living in a Metaverse of virtual worlds that mimic Earth; their lives sustained via a point system.

Most of these digital films were commissioned by Daata, a platform for virtual artworks that allows its users to collect, stream, and consume high-quality contemporary art. 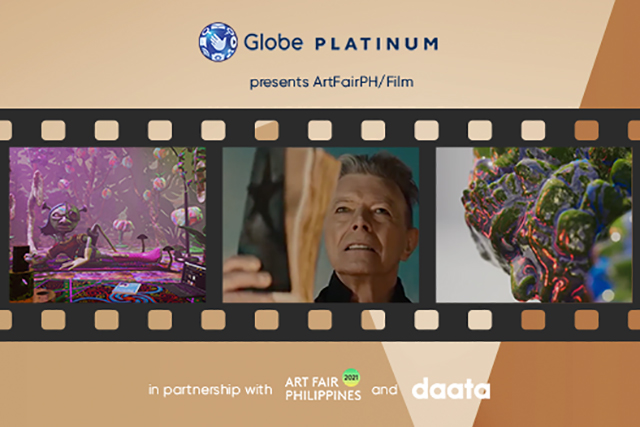 Apart from these innovative works, Art Fair Philippines 2021 is also welcoming other changes that will definitely have you excited for its new, digital format.

It’s free.
A daylong pass used to fetch P350, but in the digital space, art is democratized. Access to the website is absolutely free. What more, this year’s art fair will last 10 days so you can enjoy every digital art film and 43 local and foreign exhibitors without time pressure.

It’s your chance to help others.
Not only will you be enjoying fine art, but you’ll also be spreading philanthropy. Every art film viewed over the Art Film Weekend will be matched by Globe Platinum with World Vision school kits for children from Baseco Compound, Manila. Make sure to make your rounds through all of these digital films.

It expands the range of art.
This digital edition erases the boundaries of geography. It will feature virtual tours of art situated all over the world, from Moira Lang’s collection in Baguio to Ding Panganiban’s photos in Paris to Alfredo Esquillo’s art farm in Batangas.

It offers extras to Globe Platinum subscribers.
Platinum customers will be treated to an exclusive screening of works by various artists and creators that won’t be available to the public. Still can’t get enough? Platinum users who will attend the Art Film Weekend will also receive a limited-edition reel viewer with stills from the artists’ works as well as a one-year subscription to Daata so they can continue viewing a curated library of digital films.

Get exclusive access to a curated art film exhibit and avail of other perks and freebies by chatting with Thea of Globe Platinum, your Digital Assistant. For more information, follow Globe on Facebook and Instagram.