Maria Jeona Zoleta is one of the younger artists granted a space at the upcoming Art Fair Philippines 2017, as a part of the lineup for their ARTFAIRPH/PROJECTS exhibition. Her crazy bubblegum pop personality will take you on quite the ride. 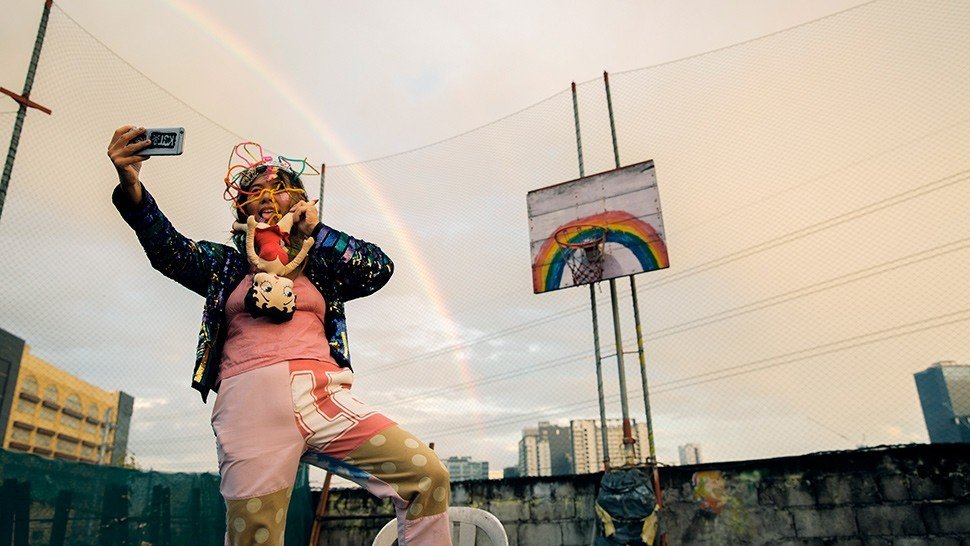 Which rattles you initially, (did you say menstruation?) But then you ruminate over the thought for a bit, and then a bit longer, and you realize, isn’t this what artists should be like anyway—unapologetic of their indifference? She behaves, in a way, just like an artist should behave—bold, careless, and maybe a little bit crazy. Artists have the power to shock contemporary culture, question mainstream norms, and suggest new ways of seeing—and if their art isn’t scratching the surface of doing exactly that—then why bother? 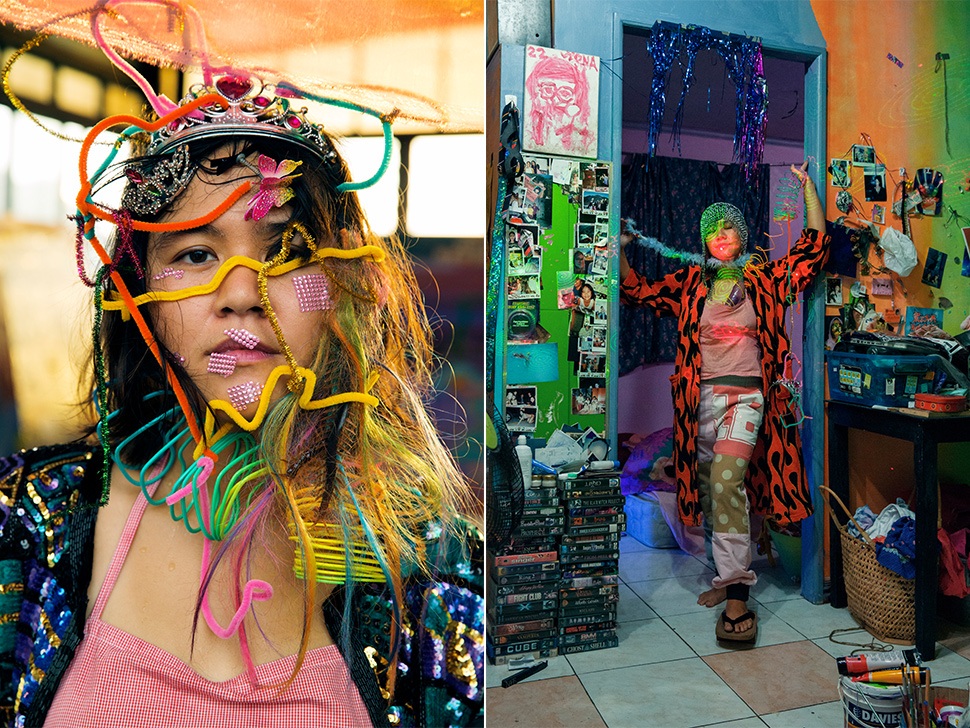 When she was in high school, she says, she used to stick her soiled napkins on the walls of the house, and because they had stayed up for so long, flies had began to swarm around them, and worms began to take life.

Jeona’s room is filled with memoirs and relics of her entire life: snapshots of all the people she calls friends and family; glitter and fabric in various shapes and patterns; mounds of books and magazines; toys, wigs, anime masks; dolls disassembled at their joints; there are three pairs of fluffy hotel slippers on one corner, next to a Japanese slipper who is losing its partner; and outside on her windowsill, the most splendid collection of plants.  It is chaos but also full of meaning, every item rich with history and each piece playing some role in her art. And here is where you get a glimpse of how dedicated she is to her craft, because no one can amass this kind of collection at just one point of his or her life—here is someone who has been doing this since forever.

By the door of her bedroom stands a small wicker chair covered with a pile of unkempt clothes, and on top of the clothes is a bunch of exposed used napkins, some of them still stuck to underwear that is turned inside out. Menstruation is something she’s been playing with for some time now, she says casually, not embarrassed by it, but aware of its garishness. When she was in high school, she says, she used to stick her soiled napkins on the walls of the house, and because they had stayed up for so long, flies had began to swarm around them, and worms began to take life.

“Okey lang yun sa parents mo?” we ask, baffled, thinking about the reaction of her parents—her father, an astute engineer, and her mother, a conservative Catholic.

“No talaga, hindi okey talaga,” she responds with a smile, but then she shrugs, as if to say, no, of course it wasn’t okay…but… 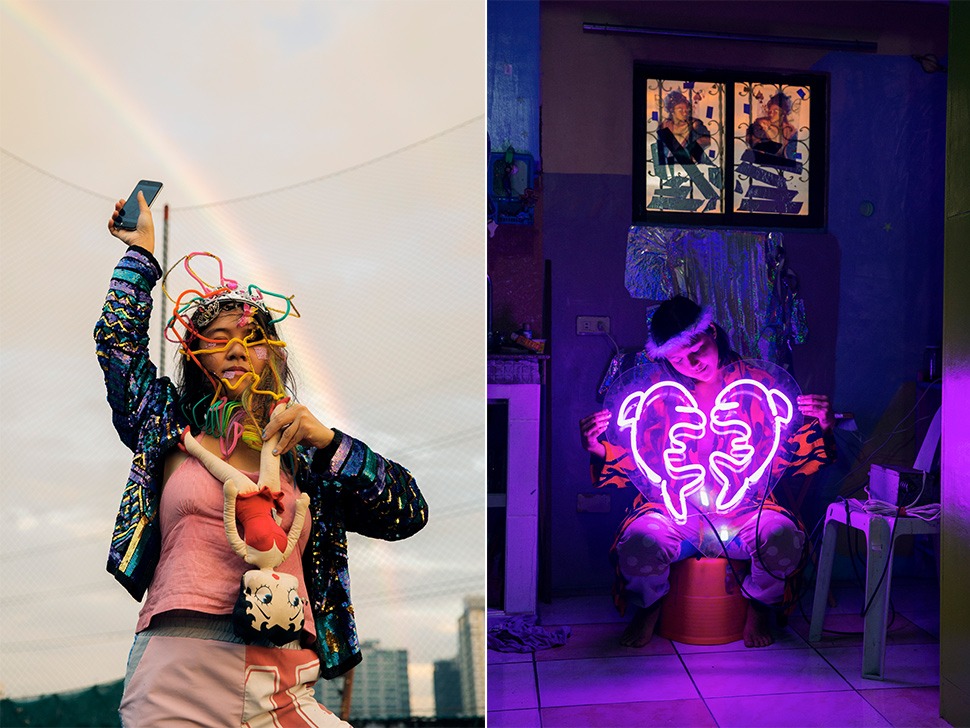 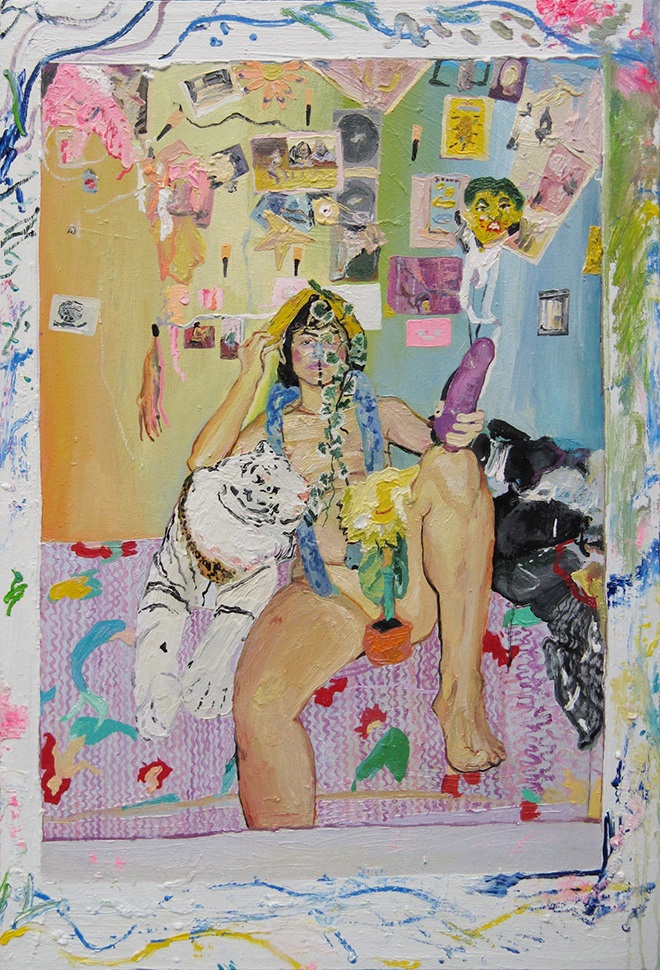 From a private grade school, to a science high school—as a young girl, she said that she always envisioned that she would become a scientist, or a spy. “Last na ’yung artist,” she says of the order of priority. After finishing high school, she entered a nursing school, only to drop out 12 days later when she learned that it really wasn’t for her. She ran away from home, running around for a year, falling in love, and getting lost. This is what fuels her passion, she says, stuff that evoke feelings. If she isn’t deeply involved in complicated relationships with men, it is with her art, but the drive that keeps this farcical artist even more farce is her deep emotional connections to things, or people, or events.

Jeona’s art is just her, all of her, vomited out and splashed on the canvas, exposed for the world to see.

“So how did you defend your art,” we ask.

So she reminds you, “I told you, I’m fucking crazy. I can do whatever I want. I have a license to do it.”

And it is true—the college girl in front of a thesis panel composed of artists Manuel Ocampo, Aileen Ramirez, and Mark Justiniani—Jeona, with the support of her mom whose feces she collected the night before, threw the jar of shit toward the judges.

She laughs at the memory looking back, but also, she comes to a realization, “though you know I guess at that time it felt like school was hindering me, pero I think kelangan ko rin pagdaanan ‘yon to get to where I am now.”

“Was it performance art,” we ask, still trying to wrap our heads around the shit show.

It’s an impulse that makes Jeona an artist in a sense that maybe we’ve forgotten artists can afford to be: deranged and surprising. It’s the only profession that allows it, after all, promotes it, even. And here, she embodies this without even really meaning to. She says she noticed that some artists work toward a mold that will give them mainstream recognition. “But I feel like, if you just do you, one day people will notice,” she says. And this seems to be where she has found herself at this point in her life as she prepares for her special exhibition in the upcoming Art Fair Philippines. 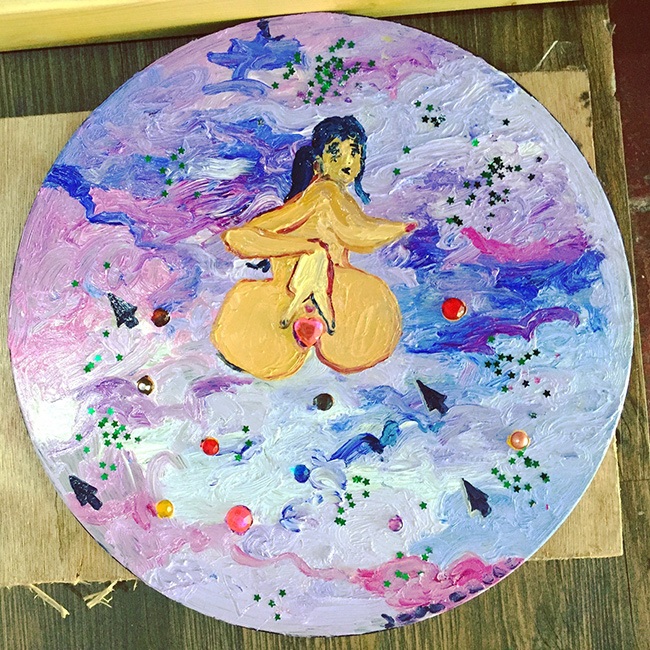 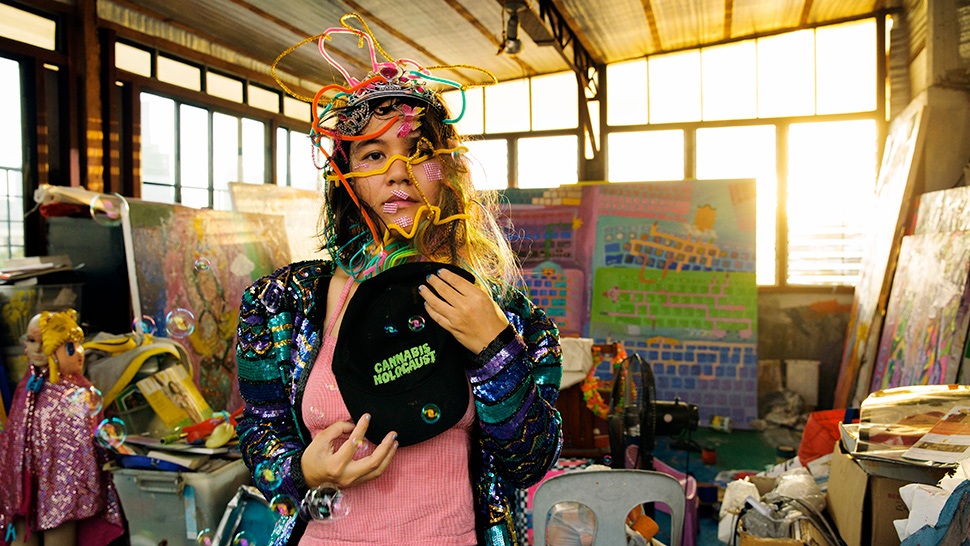 “I told you, I’m fucking crazy. I can do whatever I want. I have a license to do it.”

Everyday, Jeona wakes up at 6 a.m. to paint in her studio, located on the roof deck of her labyrinthine home. There is a makeshift basketball court right beside her workspace, her belongings heaped onto one side of the floor. On the far end, a shoddy painting of a rainbow rises over the hoop of the basketball ring—and as we prepare to take her photo for this story, above us, the rain stops, the skies clear up, and the clouds part to make way for sunshine. And we realize that a real rainbow has emerged in the sky, iridescent behind her, arching over the entire backdrop of the Manila cityscape.

And what a sight it was to see: an artist standing below one of her subjects: the rainbow. And maybe it was a fate, or maybe it was coincidence, or maybe it was summoned by Maria Jeona Zoleta, who refers to herself as “a shaman; an engineer of kink, chaos, rainbow magic sparkles and out of body experiences.” She is an artist who behaves in a way that we have forgotten artists can afford to behave—and finally, we are reminded. 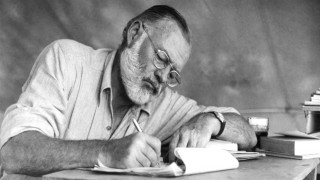 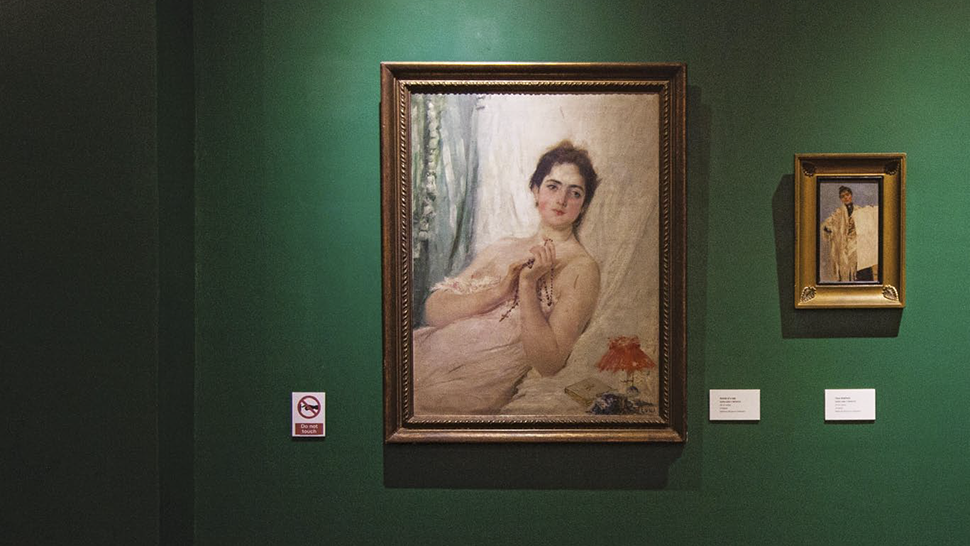