The restaurant industry is a game of survival. Take it from these 11 chains that continue to thrive today. 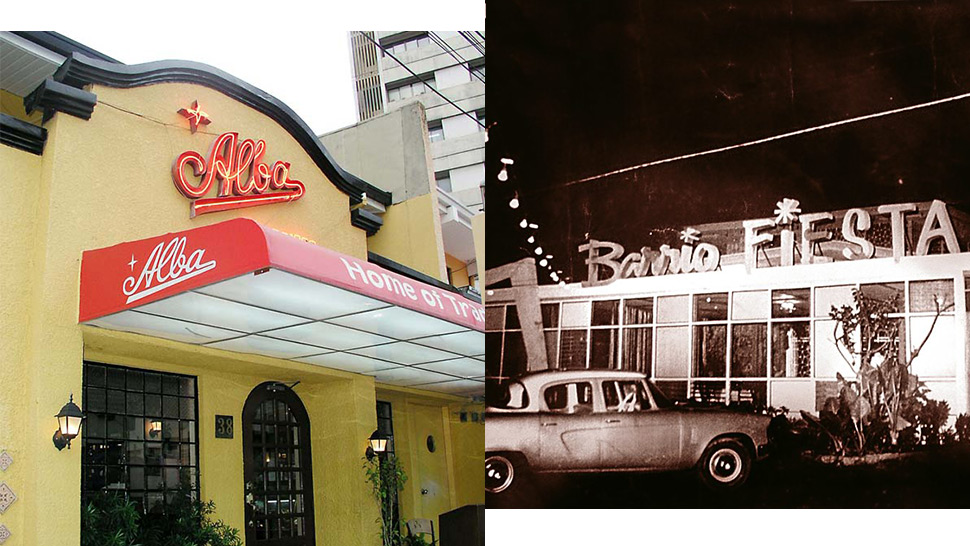 Many of us know that Toho in Binondo is the oldest restaurant in the Philippines. With a history that took root in 1888 (Rizal was allegedly a customer) and a revamp in the 1980s after the original burned down, Toho is a case study on lasting in the wild world called the restaurant industry. Its singular location has allowed the owners to focus their efforts on sustaining its legacy. But what about restaurants that have gone on to spawn branches in the country and the world over? The oldest food chains in the Philippines have shown how adaptibility and great business sense can help you not only thrive in the moment, but actually last.

The Oldest Food Chains in the Philippines

Arranged according to year, we counted food chains in the Philippines that were established in the early '70s or older and still have an active presence today. We didn't consider restaurants whose history began years ago but reopened after a significant time with an entirely new story, like the Magnolia Flavor House, whose 2012 reincarnation was shut down prematurely anyway, or other comeback establishments on this list. The following restaurants have progressed organically and continue to flourish today.

It's hard to imagine that chicken barbecue and java sauce weren't on the original Aristocrat menu. Matriarch and founder Lola Asiang started the Aristocrat with adobo sandwiches in response to the thriving sandwich industry at that time. The chicken that we love actually kickstarted the restaurant's post-war business and it continues to be the chain's signature item.

The original Aristocrat near Manila Bay may have been threatened with alleged sewage problems, but one of the oldest restaurants in Manila has been through much worse and its history stretches back much further than we realize. It was in 1928 when Lola Asiang, inspired from cooking meals for her growing brood, decided to convert the ground floor of her house into "Lapu-Lapu," which served hearty home-cooked Filipino meals.

Aristocrat's colorful history is immortalized in the book Joe Remembers, sold in selected The Plaza outlets, for P1,500. 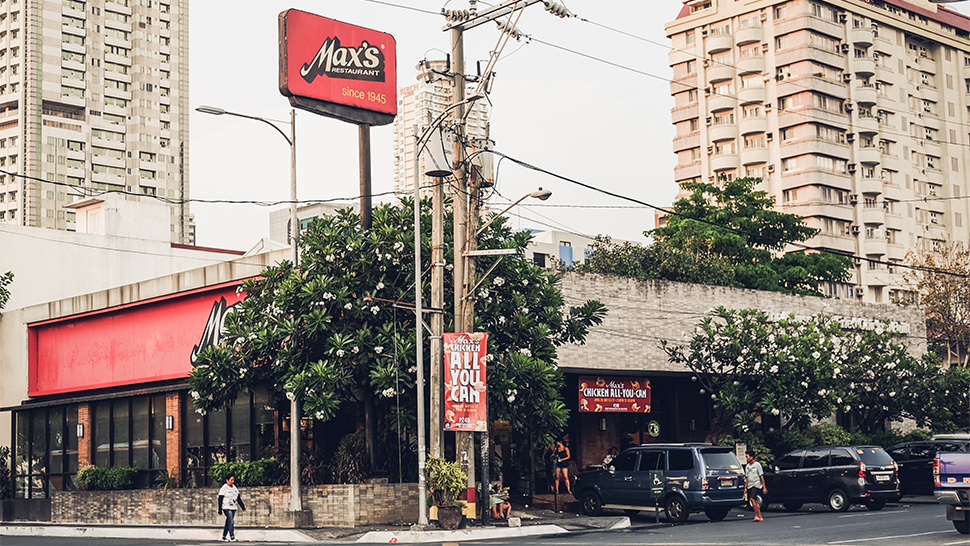 Yet another story of a home with food so good, it had to be shared, Max's started in 1945 with Maximo Gimenez. The Stanford-educated teacher befriended some American GIs and frequently invited them to his house for meals. Eventually, the soldiers insisted they pay for their meals, which prompted Gimenez to open a cafe. The first Max's still stands on Scout Tuason.

Max's Cafe, however, became the Max's we know and love thanks to Gimenez's niece Ruby, who developed the now iconic Filipino-style fried chicken, thus creating the "house that fried chicken built." Now, Max's stays within the family. The third-generation has turned it into one of the biggest restaurant empires in the Philippines. 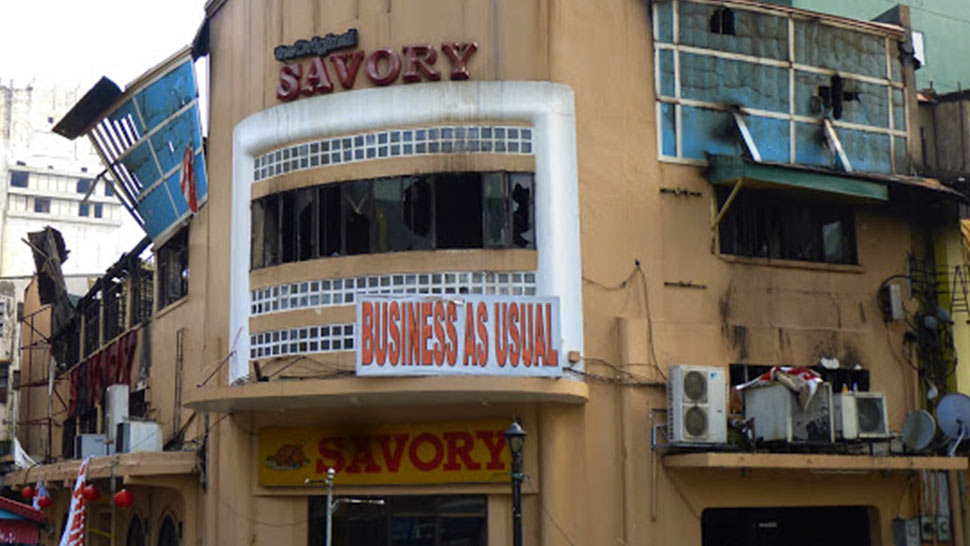 When the Ting brothers opened a panciteria in Quiapo in 1950, they probably didn't expect their legacy would survive after 69 years later thanks to some amazing fried chicken and sweet gravy that came much later. After the dish's success, first Savory Chicken was later founded in Escolta. The original branch was razed by fire in 2015. 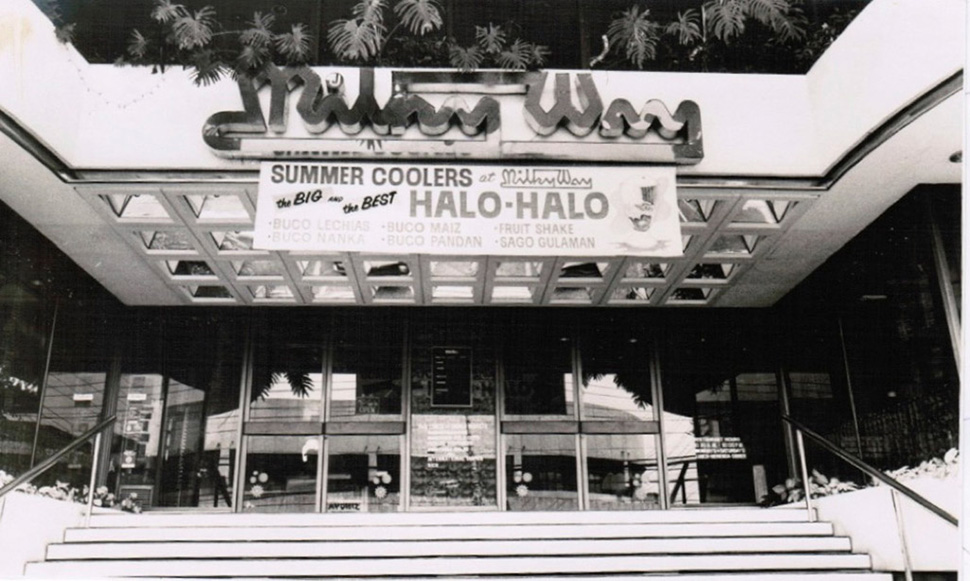 The exact year when the American-run ice cream parlor in San Miguel District opened is unknown, but we do know it became the popular restaurant it is now when Julie Araullo Gamboa took over in 1962. Gamboa supplied ice cream throughout the city and the business moved around, first to Makati Commercial Center then to Anson's Makati food court. The menu also expanded to include delicious classic Filipino dishes from Gamboa's home province of Pampanga.

In 2002, Gamboa's son, Chef J Gamboa opened MilkyWay on Arnaiz in December 2002, sticking to the brand's heritage but also creating an even higher level of Filipino cuisine. According to the MilkyWay website, the original cooks still manage the company's central kitchen. Julie Gamboa passed away in 2011 but her legacy is surely taken care of. 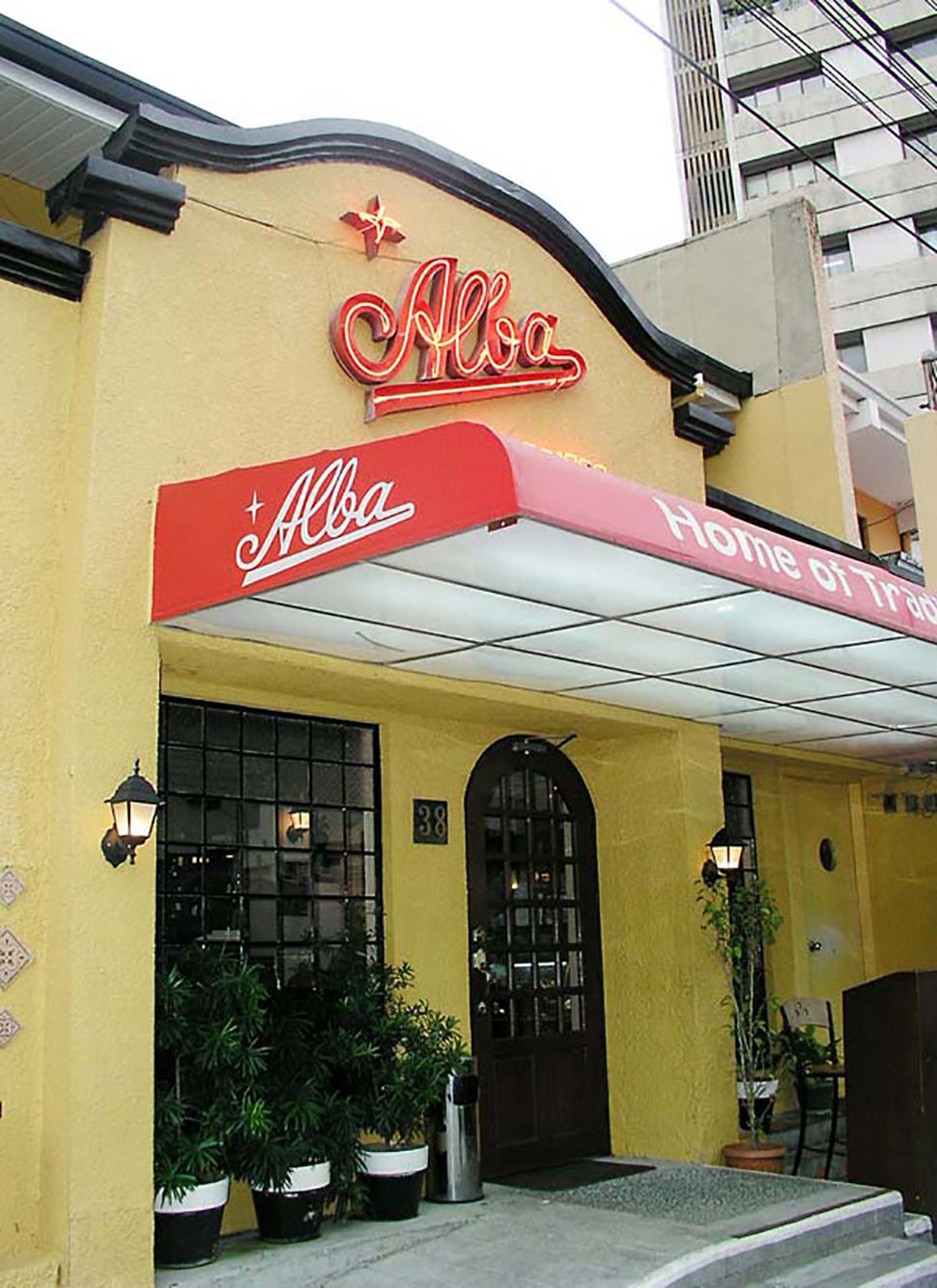 Don Anastacio B. de Alba had only been in the Philippines for two years when he opened his eponymous restaurant Alba Cocina Española on what is now United Nations Avenue. According to the Alba website, his Spanish restaurant attracted the most high profile and important crowd who followed him even when he moved the restaurant closer to Luneta.

Back then, Don Anastacio was one of the most important and visionary restaurateurs. In 1966, he added a cocktail lounge to the restaurant, then in 1975, he created a three-storey tower called La Mancha, which combined a restaurant with a nightclub. It cost an unprecedented P4-million at that time. La Mancha, however, lost its splendor when the Magallanes overpass drew heavy traffic and pollution. Don Anastacio's losses became so great that he sold everything and returned to Spain. He returned a few years later and opened Casa Colas, which is the Alba that we know now. 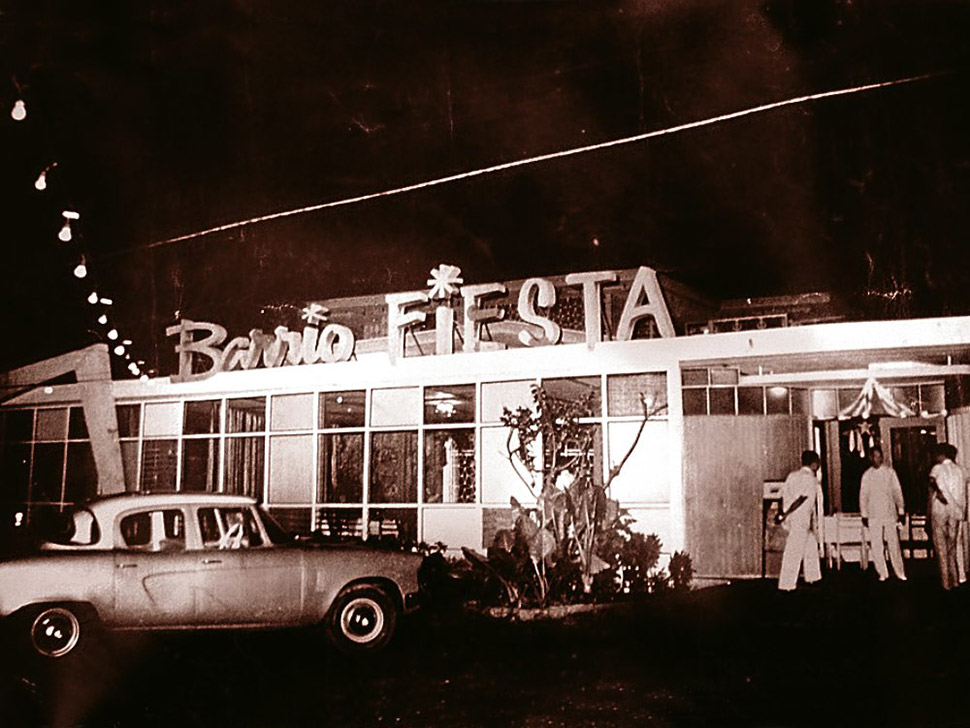 What would Filipino cuisine be without crispy pata? If you believe the stories, you'd know that it was allegedly "invented" by the Ongpauco family who are also behind the Filipino favorite Barrio Fiesta.

In a story that may seem familiar, Sixta Evangelista Ongpauco or Mama Chit got her start by creating great meals for family and friends that eventually opened the doors to a restaurant. What made Barrio Fiesta stand out was how it transformed the humble Filipino cuisine into a more elevated dining experience and the original Barrio Fiesta is considered to be the first Filipino fine dining restaurant in the country.

Apart from the crispy pata, the restaurant has also contributed to the way we enjoy kare-kare. In 2019, Barrio Fiesta continues to be a massive food empire. 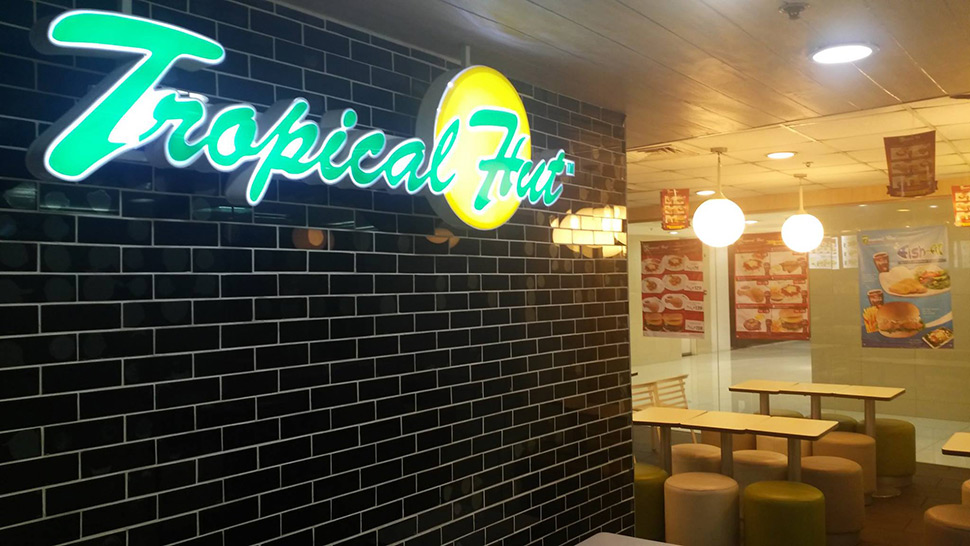 Even with Shake Shack , 8 Cuts, Sweet Ecstasy, and other burger joints, many Filipinos still consider Tropical Hut as the OG burger in the Philippines. After 57 years, it remains to be one of the juiciest, most satisfying burgers, not only for its cooking technique but also for the years of nostalgia you can taste. The burger chain opened in 1962—back then, it was a coffee shop inside a supermarket. Nowadays, Tropical Hut's history and owners remain as mysterious as ever, but we don't really mind as long as that burger doesn't change. 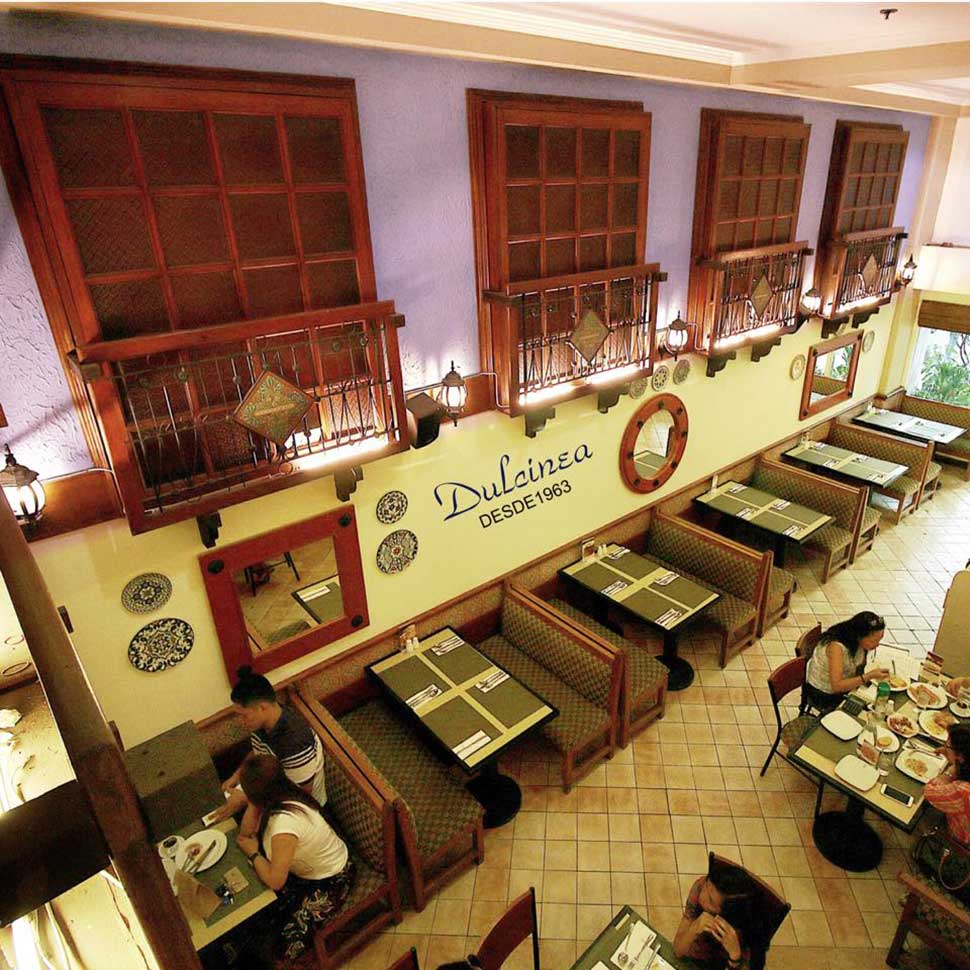 The concept behind Dulcinea began two years before its actual development. It was in 1961 when Señor Santos Ruano left his family's pasteleria in Spain to come to the Philippines. Once here, he adopted his grandparents' recipes to open Dulcinea Pasterleria y salon de Te. In 2008, it was acquired by the F&C Group. 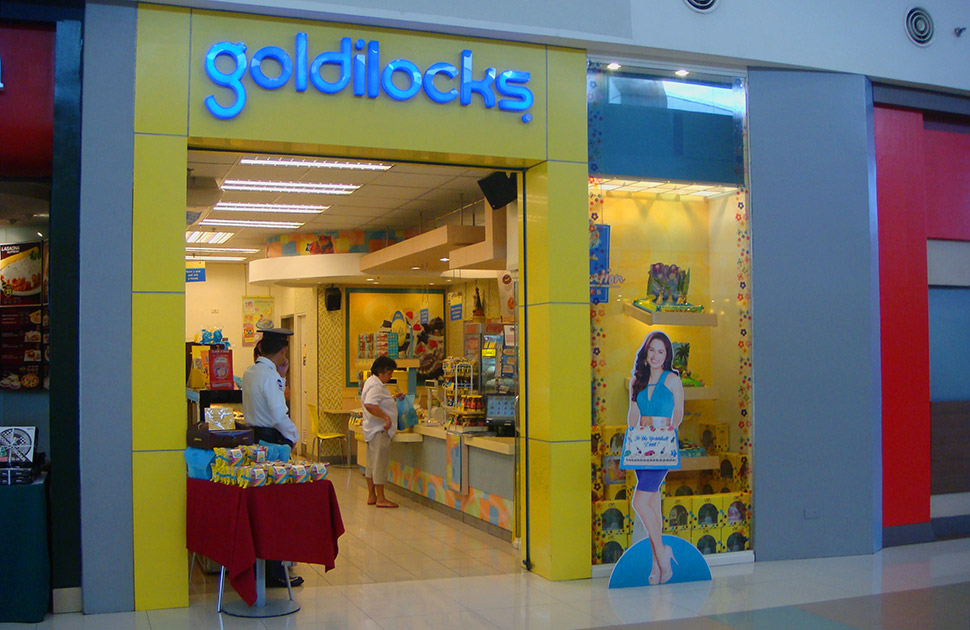 In 1966, two sisters Milagros and Clarita and their sister-in-law Doris decided to open a small bakeshop on Pasong Tamo. A third sister, Maria Flor, suggested to name it Goldilocks for recall and because it meant prosperity. In two quick years, the sisterd opened a second branch in 1968 and a year later, catering services were established. By 1976, Goldilocks expanded globally with its first overseas branch in Los Angeles. Included in the franchise's many milestones was being selected the official caterer for Pope John Paul II's visit in 1981.

Goldilocks has over 100 outlets in Metro Manila alone.

Pancake House recently launched a major throwback to its roots with the release of its Classic Cheese Burger available only at the first outlet outside Magallanes Village. The beloved all-day breakfast chain was conceptualized by Milagros Basa, Leticia Zamora, and Carmen Zaragosa, who wanted to go beyond the usual rice-and-egg type of breakfasts. Within five years, outside management had to come in to handle the day-to-day operations, new partners stepped in, and a second branch was established. Throughout its timeline, Pancake House continued to adapt and thrive.

In 2000, the Lorenzos purchased the company and turned it into Pancake House Inc. The same year, it was listed on the Philippine Stock Exchange. Everything snowballed from there: more restaurants were acquired and new concepts were created. In 2014, Pancake House merged with another restaurant giant, Max's Group.

Back in the day, what set Greenwich apart from other pizzerias was its square shape and crisp crust. It was founded in 1971 by Cressida Tueres. By 1994, Jollibee (a chain a few years younger) purchased 80% of all Greenwich shares. In 2006, JFC purchased the remaining shares. Greenwich has moved on from strength to strength, creating more favorites like the lasagna and chicken a la king, but we sure miss those square pizzas. 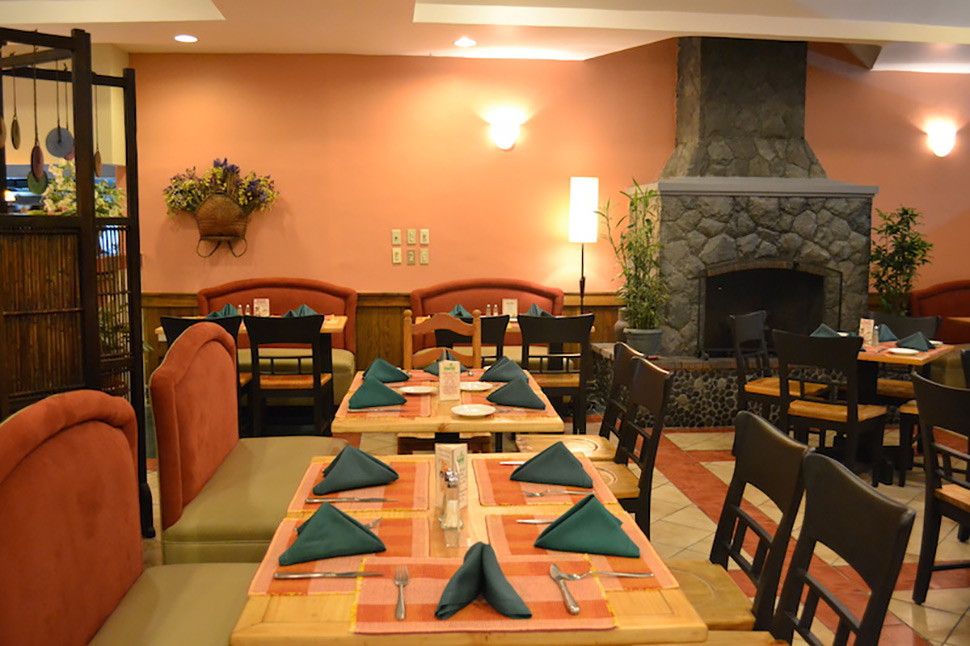 If you're not a fan of greens, you will change your mind when you eat at Mario's, which is known for its outstanding Caesar salad. The brand was first established in Baguio in 1971 by Mario and Nenuca Benitez. Nenuca used the restaurant as a venue to share her family's Spanish recipes and its steak and salad were instant crowdpleasers. In 1974, the Benitezes opened their first Manila outlet on Tomas Morato. Both branches are still open today and the company has even expanded to catering.