I Attended a Whisky Master Class. Here’s What I Learned

The world’s largest whisky event was in Manila for the fourth time and our writer wasn’t about to miss it. 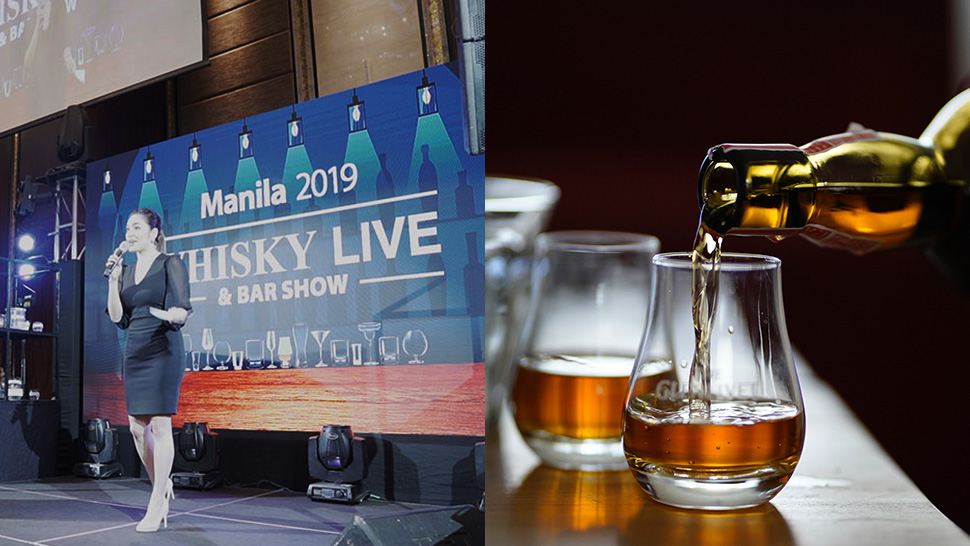 Moseying through the Grand Hyatt Manila’s doors and into Whiskey Live 2019 as one of its clearly junior attendees was initially a laughing matter. My schema presented “drinking seriously” as something we did on stressed-out college nights after days spent fretting over exams, whereas the reality conveyed through my eyes bore a picture of polished men, politely chatting, whisky glasses oscillating between their chests and noses, “drinking seriously.” Perhaps I mistranslated my schema and meant to say that, in college, “we seriously drank a lot.”

Watch highlights of this year's Whisky Live 2019 in this video:

But this refreshing take on a delicious drink often consumed in good company sits close to the heart of what the “biggest international whisky event in the world” on its fourth Manila tour hopes to achieve. With over 12 whisky masters making rounds around the crowd of a couple hundred, blurry whisky glasses jockeying between over 180 different whiskies on offer for tasting, one was bound to find snippets of knowledge—not just sloppier thoughts.

As I said, the event was only initially a laughing matter. It matured into an educational experience as I attended the Taiwanese single malt whisky Kavalan master class delivered by brand ambassador and global PR officer Kaitlyn Tsai. Following this portion of the event however, well, now I just say, the Kavalan caught up with me.

Nonetheless, here’s what I learned:

Kavalan is a fascinating company

Founded by Tien-Tsai Lee and owned by the King Car Group, the company fulfilled its founder’s dream of producing an internationally relished, and multi-awarded, single malt whisky. The dream took off in 2002 soon after Taiwan joined the World Trade Organization and caught wind on March 11, 2006 at 3:30 p.m. as its first spirit was completed.

The company, proudly donning a name in homage of the indigenous Kavalan People that once occupied Yilan Country, has since gone on to win numerous awards including Jim Murray's Whisky Bible 2017 Asian Whisky of the Year for Kavalan’s Solist Moscatel Sherry Single Cask Strength which Ian Chang, Kavalan’s chief consultant describes as “fruit jams on brownie cake.” It’s an incredible feat for a Taiwanese company operating in an industry dominated by European and American distillers.

But perhaps the country is key. “Kavalan ages its whisky in the hot and humid climate of Yilan, Taiwan,” Chang says. “This subtropical environment accelerates the maturation of the new make spirit, ensuring a richer, more complex drop in terms of body and flavor. We refer to this unique ripening process as Maturity Redefined, which creates the signature character and style of Kavalan.”

Besides whisky, the event featured other alocohol and spirits like rum, tequila, and vodka

So there we were, a select group of around 20 nestled in one of the Grand Hyatt’s cozier function rooms. The lot of us ogled as seven glasses (plus two extras as a surprise) of award-winning Kavalan whisky stared up at us from our individual tables.

Quickly, The Jokester kicked into action, asking if ice cream would be served and if the bottles were free. Naturally, we all laughed. At this point, we were all willing to laugh at almost anything.

All perhaps except, Mr. Takes This Seriously, whose primary vocal effort was put into agreeing with the flavor profile proffered by Ms. Tsai.

I assumed the role of Dude Doesn’t Know What to Do So Writes Things Down, and would often miss cracked jokes in favor of jotting down notes from the speaker’s slides. Having dived deeply into the pre-class warm-up of drinks in the main hall, I revisited what I wrote down after Mr. Takes This Seriously's mango-profiled whisky was tasted and found “Kavalan Podium was f-ing delicious.” I couldn’t help but smile.

Built to look serious, but such a good time

More than poking fun at the types of people you find sitting in a whisky master class, I hope to underscore that these things are built for fun—for appreciation without doubt, but enjoyment nonetheless. The 20 of us, in what was surely 20 different ways, spent 45 minutes wrapped in a good time, be it for the company, the hit to the head, or the actual taste of the whisky.

Of course you can venture into the delightful but gory details of the Kavalan Solist Vinho Barrique tasting of cherry wine, blackcurrant syrup, walnut, and dark chocolate, but perhaps thinking it up as “syrupy, un-carbonated vanilla coke with a punch in the mouth” is just as enjoyable—if, less something you’d want appearing in a whisky book. While many-an-enjoyment is lost nowadays in the tide of “you should see this in the painting or taste that in the coffee,” watching a group of individuals laugh at jabs for free bottles but just as quickly inquire into age of the casks used in the aging process of the product is a sight to see.

It should be noted that the Kavalan Solist Vinho Barrique was named World’s Best Single Malt Whisky by World Whisky Awards in 2015. Now, that’s some "vanilla coke."

Back when it was still called uisge beatha, the pronunciation of which I will only attempt after a few uisge beathas, Robert Savage, the eldest son of William Savage, a powerful baron of the region of Bushmills, gave his troops the distilled spirit to birth in them courage to fight on during battle. This was in 1276. The history of the spirit then traces through a few names, a few wars, a whole slew of arguments, legalizations, excises, and laws.

These laws are where things get complicated beyond just the facts of who gave whom which spirit to fight which war. They place stark divisions between what is whisky* and what isn’t, what then from the side of the split that is considered whisky is considered scotch**, and from that growingly thin splinter, what is single malt (single distillery, exclusively from malted barley, and distilled in pot stills) and what, on the other hand, is single grain (single distillery, from malted barley and possibly another grain, and generally distilled in a column still).

While we’re fanning that fire, consider that there are yet other types of scotch whiskies (see: blended). Then you have the classifications derived from where they’re produced: Islay, Highland, Lowland, to name three. But then, and at this point the world is curdling into a black hole beginning at the very core of our whisky-mellowed minds, we learn that Ireland has its own set of definitions, as does the United States with its bourbons and ryes. We also read that in Ireland and the U.S., they spell it “whiskey.”

And for all that, it’s interesting to note that the world’s largest whisky market with around 1.5 billion liters consumed every year is India (figure as of 2015).

Yes, the whisky world is as confusing as it is vast.

What a thought, that the beverage distilled of grain and aged in barrels over years was being imbibed in search of courage before UHT milk was even invented (around the 1960s). It comes then as no shock that some distilleries were founded in the 18th century. Take Jameson, which was founded in 1780, for example. Jet through to today and you find hyper-modern distilleries like Kavalan operating in the humid conditions of Yilan County and utilizing such conditions to better age the whiskies—developing creamier bodies and sweeter (yes, mango-like) flavors.

I seek not to detach the event from elevating the beautiful beverage to where it should rightfully be—at a seat of appreciation and properly moderated enjoyment­. Nor do I seek to draw a derisive line between people who work on profiling and those who do not. What I hope to do is leave all the seriousness, tasting notes, the true delights of mindfully contemplating the beverage to the whisky masters and each individual keen on giving whisky a taste.

It’s gasoline for some, mango for others, but for most—in one way or another—it’s a spark of a good time.

The fourth edition of Whisky Live was the biggest one yet

Some extra notes for those keen few (from Cyrille Mald and Alexandre Vintier, authors of Iconic Whisky)

*In traditional whisky-producing countries, whisky is generally defined as a spirit:

-made from one or more types of grain

-fermented mainly by action of yeast

-then distilled to less that 94.8% alcohol by volume

-and finally bottled at at least 40% alcohol by volume

**For a whisky to be “scotch whisky” it must be all the above with fermentation and distillation taking place the distillery, and that, during ageing, only casks that have been emptied of liquid are permitted. Also, the use of oak shavings, sugar, caramel, boise (an infusion of shavings in distilled water), and paxarettea (sweet Spanish wine) are prohibited. All whisky produced in Scotland must adhere to the regulations of Scotch whisky.