How to Keep a Cool Head While Watching Sports
Culture

How to Keep a Cool Head While Watching Sports 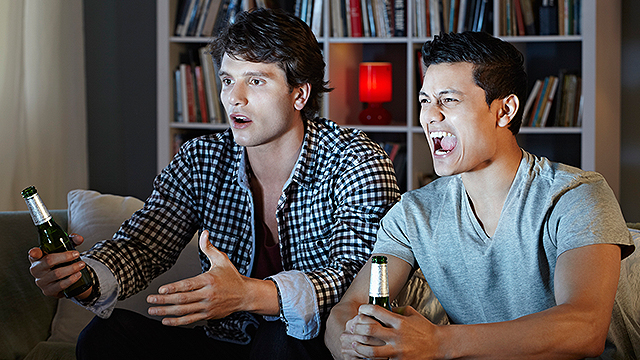 We can all agree that nothing beats seeing your team bounce back late in the game to lock in the win, or exchanging high-fives with the person sitting next to you after a thrilling play. While it can be exhilarating, it can also be stressful and infuriating.

Don't be that guy nobody wants to sit with during games: the glaring fanatic screaming obscenities and cussing out players, or the OA sports fan criticizing every play. Here's how you can keep your cool every time:

Watch with friends, preferably those who are known to be calmer than you.

Watching and playing sports is a social activity. Witnessing the athletic accomplishments and cheering on a team's victories is more uplifting when done collectively. Being in the company of people who remain calm and positive in the tensest situations can help keep you from lighting up like a short fuse.

Don't consume alcohol or caffeine prior to or during the game.

While you think drinking alcohol or caffeine will steady your nerves during a do-or-die game, it can actually do the opposite. Caffeine in coffee is a stimulant and can produce a heightened sense of perception. This effect intensifies alertness, making a person more aware of mild annoyances, and increasing anxiety by alerting you to all the potential negative outcomes of a situation. Alcohol, meanwhile, is a depressant-it suppresses inhibitory neurotransmitters in our brains and affects your impulse control. Individuals under the influence may have a shorter temper than they otherwise would.

These days reactions to plays and calls seem to be intensifying beyond good-natured fun. Coming up with the snarkiest comments or the harshest opinion has become some sort of competition. Comments can be mean-spirited or confrontational, and sometimes you can't help but fire back. To avoid getting caught up in the feverish drama of online sports commentating, ditch your phone's screen for the time being and focus on the game.

Remember that it's just a game

For sports fans, watching a game should be a form of entertainment; not a life and death situation. In the grand scheme of things, whether your team has won or lost should have relatively little impact on your life. Try not to bust an artery lamenting every single bad play.

Keeping a cool head and not giving in to your temper will allow you to enjoy the thrill of watching a game unfold. You can also literally keep a cool head with the help of CLEAR Cool Sport Menthol. CLEAR Cool Sport Menthol Shampoo helps refresh your scalp and hair, allowing for a cooling sensation and helping you stay calm while watching your favorite sports, whether live or on TV.