Tourism Secretary Berna Romulo Puyat asked us to be guinea pigs for a new tour.

Best way to beat the Manila traffic. Take a ferry down the Pasig River.

The Pasig River Ferry resumed it service in December 2019. It runs every hour from Pinagbuhatan in Pasig to Escolta in Manila, 12 stations total. Currently, it is free of charge.

We were invited by Tourism Secretary Berna Romulo Puyat to be guinea pigs on a cruise from the Guadalupe Ferry Station. It took us about 45 minutes to Escolta, where we were met by Manila Mayor Isko Moreno who took us on a quick jaunt around the walled city of Intramuros. 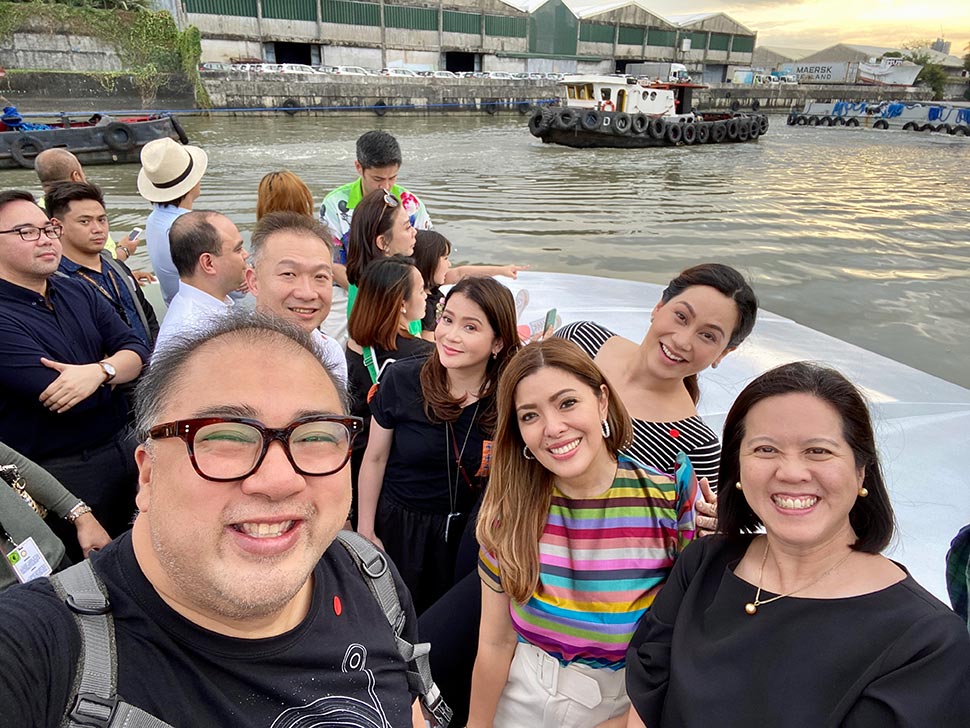 Here are 10 reasons why we enjoyed the ferry ride, and later the tour of Intramuros.

1| Believe it or not, there were no odors emanating from the river. We were told this was due to the rehabilitation of Manila Bay last year. Also due to the relocation of informal settlers on the banks of the river, which removed many of the pollutants.

2| Happy children waving from the shore as we cruised by.

3| The murals on the walls, some commissioned, others graffiti. All pretty.

4| Seeing grand Malacanang Palace from the back end. No photos allowed for security reasons, and the Coast Guard made sure of it. They boarded the ferry and watched all of us with hawk eyes. Meanwhile, a speedboat keeping pace with us did the surveillance from the water.

5| A view of the Manila Central Post Office, originally designed by Juan Arellano and Tomas Mapua in neoclassical style and built in 1926. The construction cost one million pesos back then.

6| The bridges we passed, each one different—Guadalupe, Lambingan, Ayala, Quezon, and Mac Arthur.

Plus the beautiful, newly restored neoclassical Jones Bridge at the end of our journey. Originally built in 1919, it was part of a master plan of Manila by Daniel Burnham who likened the Pasig to the Seine in Paris. Juan Arellano did the bridge’s final design, inspired by George Eugene Haussman’s renovation of the City of Lights. For the bridge’s restoration, Manila Mayor Isko Moreno took on Jose Acuzar of Las Casas Acuzar as a consultant on the project. Acuzar added Beaux Arts-style lampposts evoking Pont Alexandre in the French capital. One of the bridge's four original statues was also recently returned.

7| From Escolta, we took a Tranvia and electric vehicles through the beautifully lit streets of Manila and into the walled city. We were pleasantly surprised when a familiar figure slid into the driver’s seat and took the wheel. Yorme!

8| Scenes of old Intramuros were projected on the facade of one of the buildings of the United Philippine Lines. An amazing light show.

9| The dungeons of Fort Santiago were reopened in January 2020. They recommend it for ages 13 to 50, but my 76-year-old mother proved everyone wrong. She descended into the damp stone walled depths which I must admit were quite creepy. While they were originally built for storage of ammunition, they were later converted into prison cells.

10| Dinner was at the spectacular Marble Hall of the Ayuntamiento, formerly the seat of the Manila City Council. The original building opened in 1607. Restored in 2009, it is currently the home of the Bureau of Treasury.

This new tour is still in its dry run stage. Follow the Department of Tourism to learn more about this future tour and other places to visit.

You Can Now Visit Intramuros' Dungeons For Night Tours