Given the Irrawaddy dolphin’s critically endangered status, the sight of a pregnant dolphin and calves is great news. 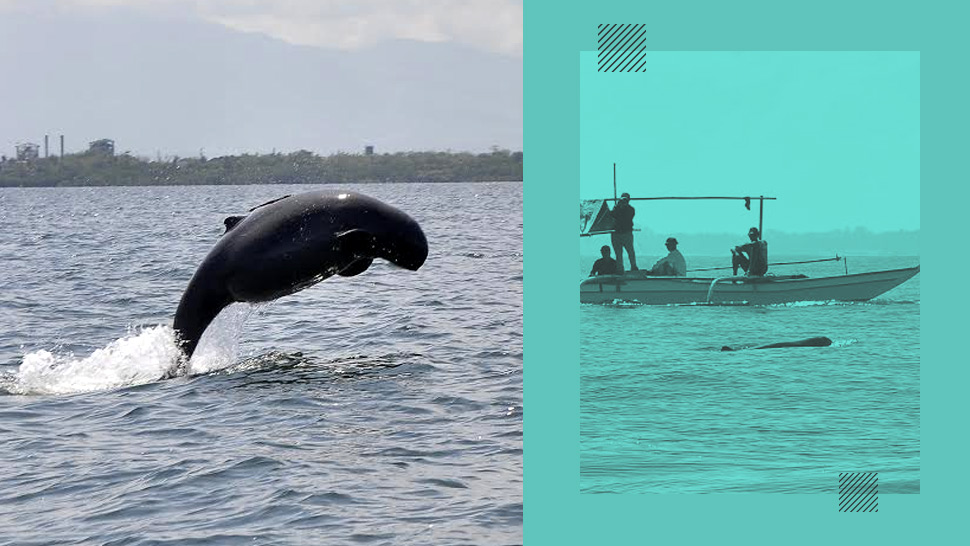 Yesterday, the dolphin research team of University of Saint La Salle-Bacolod was delighted to spot a pregnant Irrawaddy dolphin in the waters of Bago-Pulupandan, Negros Occidental. This is wonderful news for conservationists, since the local population is listed as critically endangered.

Mark dela Paz, the leader of the dolphin research team, began studying these mammals in 2010 when he was doing his thesis at Silliman University. “There have been dolphins that went missing in the past years, so our recent estimate has declined. It used to be 23 dolphins, but it’s declined to around 19 dolphins this year,” he says. 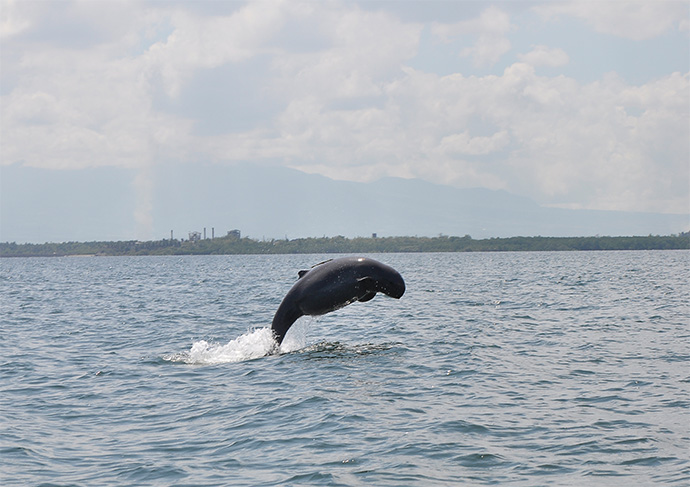 Kaila Ledesma Trebol, a Philippine Reef and Rainforest Conservation Foundation Inc. trustee, was able to capture the moment the dolphin leapt out of the water with a very visible baby bump. It is a truly rare photo, since Irrawaddy dolphins are quite shy and don’t often breach or leap out of the water.

“It was amazing,” Trebol says. “These dolphins are extremely rare in the Philippines, the only other place you can see them is Malampaya Sound in Palawan. They’re quite difficult to spot. They’re not like your spinners or bottlenose dolphins who will bowride on the boat. I went out two times prior and we weren’t able to see them. This is my third trip and finally I got to see them so I was of course really excited and they stayed with us quite long, maybe around two hours.” 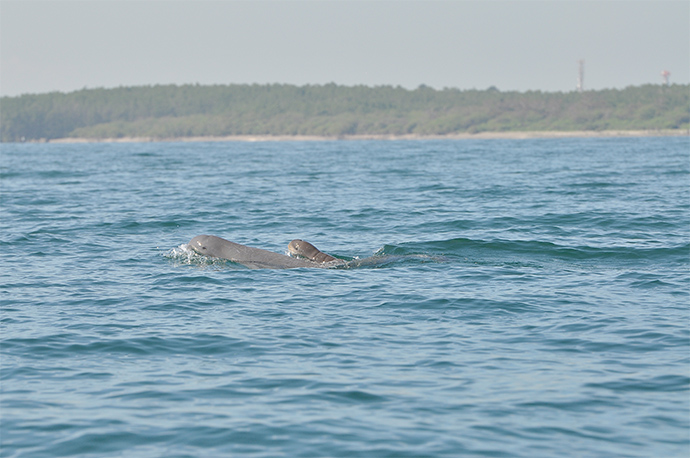 An Irrawaddy dolphin and its calf

The researchers were surprised to see the dolphin—nicknamed Topnick—jumping so high, since it was very unusual behavior. They noticed there was a remora—a fish that often hitches a ride on sharks, turtles, and manta rays—attached to the dolphin. “I think it was trying to get it out by breaching and jumping and splashing into the water,” Trebol says. “It was really nice because we got a really clear view of the belly. We were so blessed, we were so lucky to be with those dolphins.”

The research team also spotted two to three calves. “It brings us a glimmer of hope that the dolphins will bounce back from the low population that we have now,” dela Paz says. “It’s good news for us but we’re not yet sure if [the calves] can survive because in the past few years we’ve had some calf mortalities. We’ve had reports of calves being washed ashore. So calves are very vulnerable.” 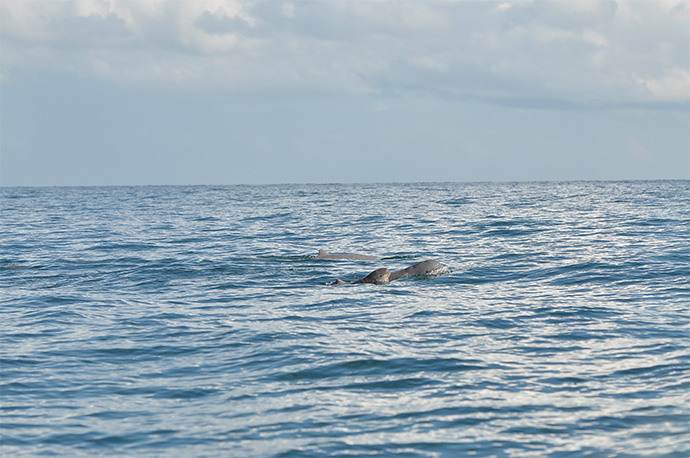 Another Irrawaddy dolphin and calf

He adds that Irrawaddy dolphins have a very slow reproductive rate—they only bear calves every two to three years, since the females have to nurse their calves before going into heat again. His team usually only spots one calf a year.

Irrawaddy dolphins (Orcaella brevirostris) are listed on the International Union for the Conservation of Nature (IUCN) Red List as an endangered species. The distinctly shaped Irrawaddy dolphin looks like the beluga whale, in that it has a blunt, rounded head and a large bump made of fatty tissue in its forehead; but it is most closely related to the killer whale. Living in brackish water near coasts, rivers, and in estuaries, the Irrawaddy dolphin is found in only eight places in the world, ranging from the Bay of Bengal to New Guinea and the Philippines.

The biggest threats to the dolphins are the fishing nets in the area. “This is what amazes me: the area is murky, silty, yet it has that pod of dolphins which means it’s still quite rich, meaning they can find their food there,” Trebol says. “Although these dolphins are really found near estuarine areas. But if you go to Bago and Pulupandan, I wouldn’t say it’s pristine, there’s a lot of fish pens in the area, there’s a port also, so a lot of boats pass by. We notice some of the dolphins have some cuts or scarring on their dorsal fins. Although we don’t know what caused those injuries to the dolphins, we can only assume.” 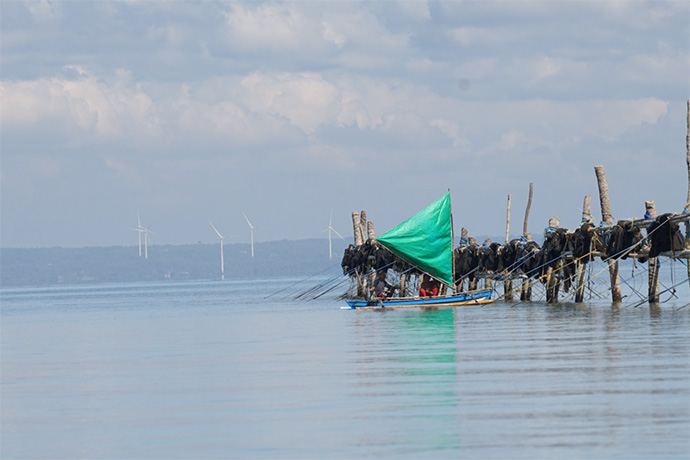 Fish pens are the most obvious threat to Irrawaddy dolphins' survival

Dela Paz’s team is currently working with the local government of Bago City and Pulupandan to address the situation. “We’re proposing to set up a marine sanctuary in their coastal waters so that we can at least designate some part of their coastal waters as protected areas. [That way] we can lessen the number of fishing boats or even the nets in that area that can threaten the dolphins,” he says.

People interested in supporting their project can help by finding alternative livelihoods for the fishermen who set up pens in the area. But if you aren’t up to setting up shop in Bago City, the least we can all do is lessen our use of plastic—another thing Dela Paz has observed about the dolphins’ habitat is that it’s full of plastic waste. 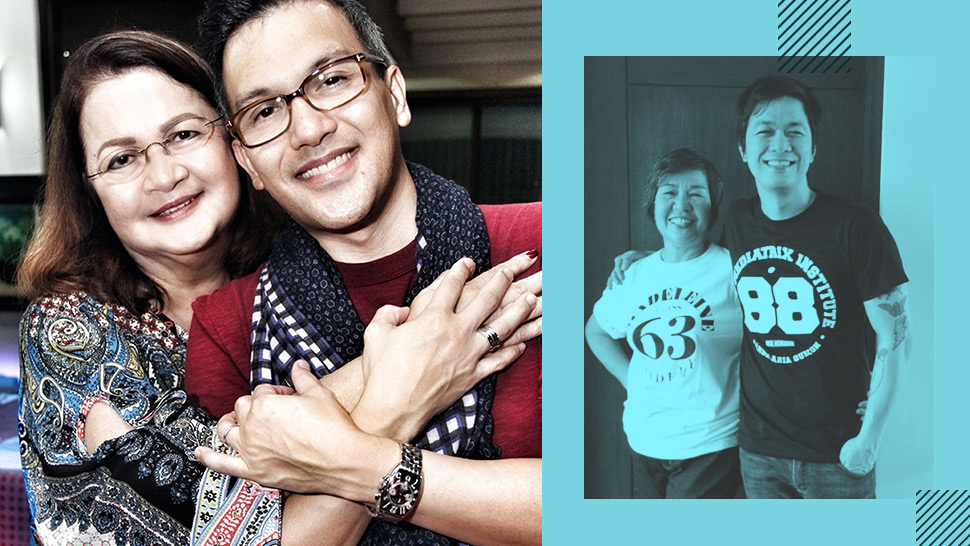 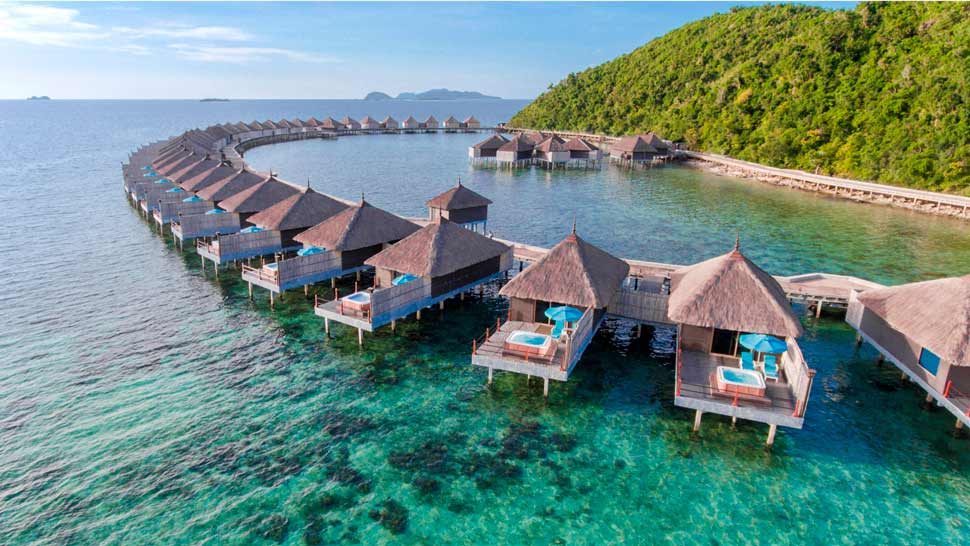 Nope, This Isn't the Maldives—This Luxury Resort is in Palawan
All Photos
Comments
View As List