'Avengers: Infinity War' Has A Pretty Sinister Message For A Children's Movie

If you love someone, you have to kill them

If you truly love someone, you have to be prepared to kill him. At least, that’s what Marvel wants you to think, if we’re to take seriously any of the dark, apocalyptic finalities of their latest cinematic onslaught, Avengers: Infinity War.

The film, which just surpassed Star Wars for a record-setting $250 million opening weekend in the U.S., pulls together dozens of characters and interconnected storylines to put forth a bewildering spectacle centred around the notion of sacrifice. You must always be expected to take the life of the person you love the most, according to every major plot cornerstone in this children’s movie.

Thanos—a titan from a wrecked planet—is the eight-foot-tall madman who is willing kill half the people in the universe to restore order to what he perceives as overgrown worlds.

Does he mourn the billions of innocent lives that will be lost in his quest? Nope! He’s more concerned with some of his own personal family drama. When she was a child, Thanos took Gamora away from her planet, which he himself was destroying for various reasons. He raised her as his own, until she rebelled against him and joined the Guardians of the Galaxy, as teens often do. In Thanos’s quest to obtain all the mythical Infinity Stones, Gamora becomes the tragic hurdle on his way to balancing the universe. “A soul for a soul,” he’s told by the keeper of the Soul Stone, which functions both as a handy plot device and a succinct description of the film’s sacrificial underpinning as a whole. That's right: He must kill Gamora in order to obtain the stone, kill half of the people in the universe, and save the universe. It's completely faulty logic upon which the greatest villain the Avengers have faced yet is built.

Thanos isn’t the only one tasked with killing Zoe Saldana’s green-skinned warrior heroine. About a quarter of the way through the 150-minute film, we’re re-introduced to the goofy Guardians of the Galaxy, who are momentarily wrought with a deep ethical quandary. Gamora, realising that only she knows the path to the galaxy-shifting Soul Stone, tells Peter Quill that he must promise to kill her should Thanos capture them.

Marvel movies—especially the cartoony Guardians franchise from James Gunn–have always upheld the notion that saving lives is more important than killing the bad guys. That's fine! But things get a bit darker here, when Gamora is taken by Thanos and Quill is faced with a choice. He can kill her, keeping the location of the stone safe. Or he can let her live so she'll be tortured and eventually give up the location of the stone, condemning the universe to unimaginable destruction.

Then there’s Scarlet Witch and her hot new synthesised boyfriend, Vision. It’s never really explained why Elizabeth Olson and Paul Bettany’s characters are attracted to each other (though fans of the comics will recall the rich history between the two alienated characters) but in Infinity War, we’re fast-forwarded to the end of their relationship, when Vision must demand Scarlet Witch to use her considerable powers to destroy him, when necessary. 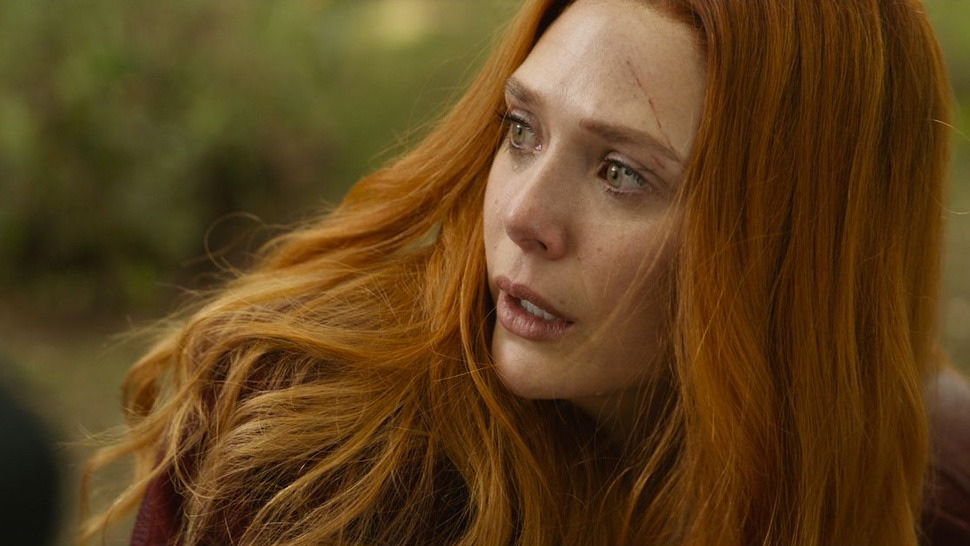 Vision is powered by the Mind Stone, the sixth and arguably most important stone of the film. After a failed attempt in Wakanda to remove the Stone while still keeping Vision’s consciousness intact, the dreaded motif surfaces yet again—to save the world, Scarlet Witch must take the life of her beloved Vision.

And in the heat of battle, Wanda does indeed crush the Stone with her powerful energy blasts, effectively ending the life of her one true love. Unfortunately, Thanos negates her sacrifice using the moment-warping powers of the Time Stone—Vision dies (again!) and the villain wins and kills half the universe.

Perhaps sacrifice fuels the box-office dreadnought of Infinity War because there are simply no more villains left to kill. Thanos is, for all intents and purposes, invincible in the film, and he functions more as a beacon of self-sacrifice than as a monster capable of being beaten.

THANOS FUNCTIONS MORE AS A BEACON OF SELF-SACRIFICE THAN AS A MONSTER CAPABLE OF BEING BEATEN.

These Marvel heroes have seen a lot—many of them have already fought through entire trilogies of their own–and after almost a dozen films, maybe the filmmakers decided the only way to impart serious emotional heft to audiences is to force these heroes to witness, and actually bring about, the death of their closest loved ones.

Whereas the thrilling Captain America: Civil War saw our Avengers pitted against one another, Infinity War turns this battle inward yet again, where it’s not the lives that they are fighting for that matters, but the lives they are willing to let go. A gloomy moral indeed, especially for a blockbuster that’s supposed to be fun for the whole family.

About The Author
Jennifer Read Dominguez
View Other Articles From Jennifer
Get The Latest Updates From Esquire!
Subscribe to our newsletter!
Latest Feed
Load More Articles
Esquire Money

New 'Goyo' Trailer Plays Up The Romance, Raises The Stakes
All Photos
Comments
View As List