A Definitive Ranking Of Bond Villains, From Pretty Well-Dressed To Pure Evil

There's a reason James Bond hypnotises generations of men (and women). He's polished. He's cool, the classic kind. And behind the macho veneer of womanising and sin, his intentions are, deep down, very pure: he wants to save the world, and frequently does so.

Oh how very dull. For why rescue a planet hellbent on ruining itself when you can hold it to ransom? Yes, while 007 wasted time commando rolling around burning buildings, a litany of nefarious men aimed for global domination—and they did so in some very nice menswear.

No Savile Row suits, but cardigans and corduroys in Auric Goldfinger's favourite colour (which is gold, if you weren't aware). No special ops knitwear, but the menacing monochrome of technerd-tycoon Elliot Carver. And rather than go for the coiffed, ladykiller side-parting, Ernest Stavro Blofeld chose to go sans follicles entirely. Because evil men don't play by the rules. They don't have to be liked. Instead, they march to the beat of their wicked, C4-rigged drum, and they do so in some exceedingly good menswear.

Here's our definitive ranking of the best-dressed Bond villains.

Blink and you'll miss Licence To Kill's Colonel Heller, a middle management grunt that meets his end by way of a frenzied forklift.

His limited screentime is a crime, however, as the oft-forgotten henchman sings the praises of a good military beret that can be worn by non-horrid people, too.

Steve Jobs was a very good person. But what if he was actually really awful? What would he look like?

Well, he'd look a lot like Elliot Carver. The technerd of Tomorrow Never Dies is never seen to be humiliating employees by making disobedient board members face the wall, but you sure can imagine it. And the image is helped by the Brit's permablack uniform with data cruncher rollneck, and normcore spectacles.

Not the best-dressed of the bunch, but you've got to applaud a nerd for trying.

Gender fluidity wasn't really a thing in the mid-Sixties. That didn't stop Thunderball's Jacques Bouvar from leading the charge though, embracing his inner femininity to go incognito at his own funeral as a grieving widow before attempting one last hit on Bond before 007 escapes on a jetpack. It's as ridiculous as it sounds. And Bouvar is a true maverick. 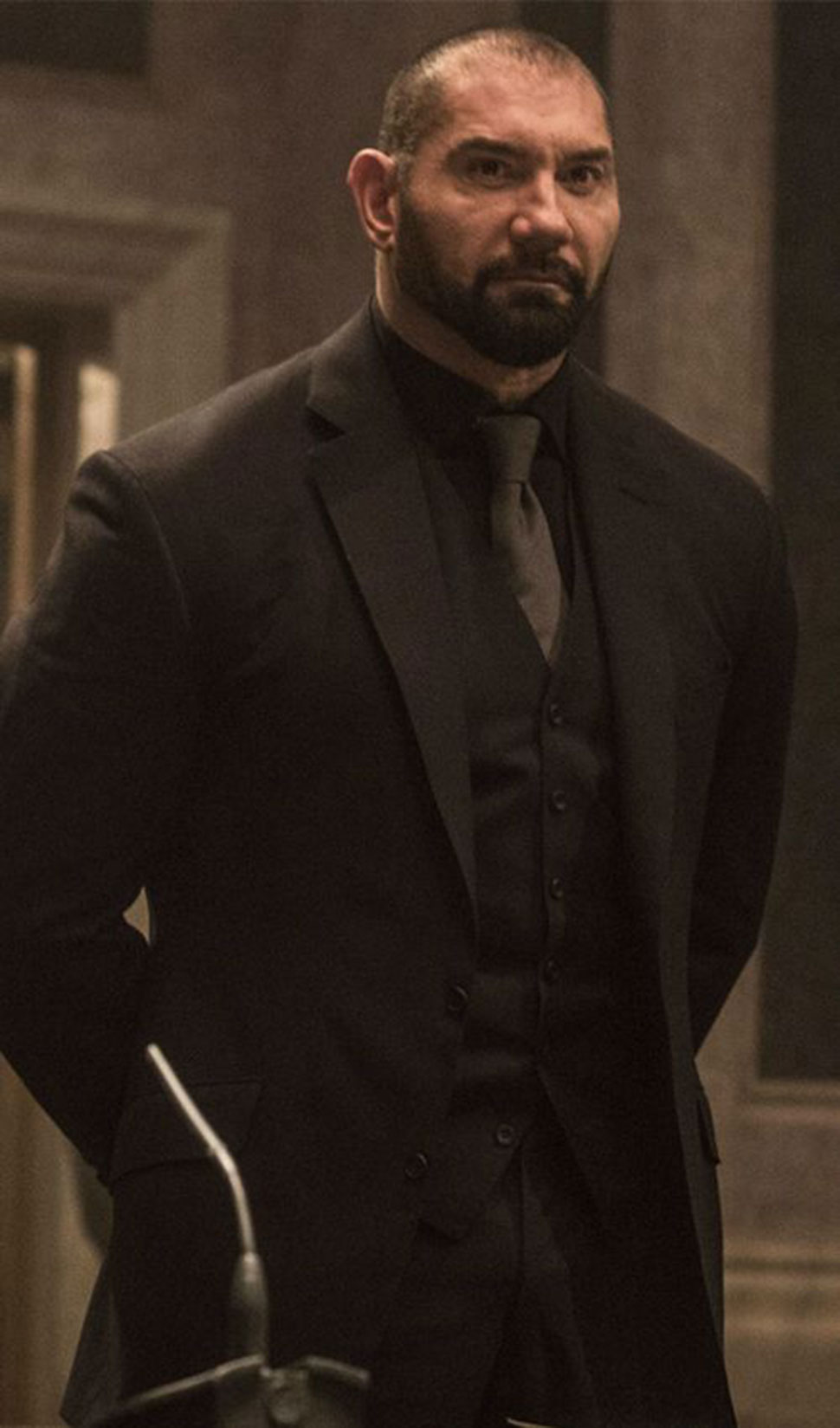 That's because the black shirt—as in an actual monochrome black shirt, not the uniform of unreasonably aggressive fascists past—has enjoyed a surprising return. Hinx's pairing of darkness with similar pieces elsewhere has been a big hit in Hollywood of late, too. And, in the grand tradition of doormen on a power trip, Mr. Hinx really is a total, insufferable tosser.

Sweater vests, mad shirts and gold jewellery makes Casino Royale's smalltime henchman Alex Dimitros a very big deal. It's a saving grace too as he loses his car to Bond in a car game, then he loses his wife as Bond sleeps with her, then he gets iced in the middle of a museum as Bond stabs him to death. Makes you wonder who the real villain is.

The archvillain of Die Another Day is depressingly problematic for so many reasons (chiefly because he's a Korean man that's surgically transitioned to a white man for no apparent reason whatsoever). But, beyond the colonial hangover, Gustav Graves' take on Versace Iron Man is a saving grace, and a strong glimpse of Neo Moscow circa 2033: where cars can fly and the racial reassignment is free!

From Russia With Love saw general dogsbody Rosa Klebb try to kill Bond at least 922 times on behalf of deskbound superiors. And despite being overworked, underappreciated, and having annual leave frequently cancelled due to working commitments, Klebb never let appearances slide: the colonel's uniform was immaculate, and the sensible brogues function (not least because they concealed poison-tipped blades). Someone, please get this woman the promotion she deserves.

Victor Renard would have Leon on toast. The Soviet trained assassin is feared the world over, with a bullet permanently lodged in his brain that has switched off neurological pain receptors. Very convenient.

With such a serious head injury, you'd expect slurred speech, or the locomotive skill of a hammered chimpanzee. And you'd be incorrect! For The World Is Not Enough's bad man settles for the bad man clothes of yore: boxy leather jackets, all-black fleeces, even a dodgy scar or two. Take that, Leon. And Balenciaga.

Check out the lid on Chang, guys! Moonraker's resident dog trainer is fresh from Toni & Guy, telling all the girls in the office that he "just fancied something a bit different", before giving it a theatrical flick whenever anyone calls his name. Gorgeous.

An eyepatch is criminally underrated. There's something quite international about it. You've lost an eye, for a start, and that's more likely to happen in a war zone than a Zone 3 commute. It's also a bit confident, because you're not even trying to cover it up with a weird, slightly off glass eye.

But, all in all, an eyepatch puts you in league with the likes of Emilio Largo: Never Say Never Again's Neapolitan villain, and a well-heeled man that likes to vacation beneath Ethiopian oases. It's all very glamorous, isn't it?

'Tilda Swinton on the tax dodge' sounds like an unlikely Bond villain.

And yet. Max Zorin, Christopher Walken's chilling oil baron from A View To A Kill, is the sort of oil baron that frightens for all the right reasons. What's more, he proves that it's the small touches that make a tux: Seventies softcore director aviators, an enigmatic leer, and, of course, a lick of otherworldly peroxide hair.

You're on a night out, and you've inadvertently ended up in some weird Mayfair club that'll likely be shuttered in a month. No problem, this is unexpected! It's a laugh! Oh, that lone guy sloping by the bar has invited you all back to his? Okay, that's fun and strange. Why does he have a penthouse on Dover Street? Why has he got out his pet chameleon? Why is it 7:00 a.m.? Why is this man remarkably similar to Licence To Kill's Franz Sanchez?

That's because he is Franz Sanchez: the drug dealing foil to Timothy Dalton, and a man known for shouty gold watches, loud billowing shirts and slightly odd pets he'd do better to keep in a tank.

Ignore the Russian name. Georgi Koskov is a real lord of the manor, resplendent in cravat, tweed and hair oil. It's a change of pace from the lazy stereotype of Soviet military dress and what's more, is the sort of classic menswear/global scheming you can still find in Boodles today.

GoldenEye's Alec Trevelyan had every reason to be a bit difficult about things. An orphan unfairly treated by his employers at MI6, 006 went rogue and ditched the teacher's pet Savile Rowness of Pierce Brosnan, instead opting for foolproof, cozy boy Spetsnaz black as he sought to knife London's stock market using an electromagnetic pulse. Well-dressed, and realistic in his career objectives.

Not the milkman of your parents' youth, but Francisco Scaramanga: The Man With The Golden Gun, and a villain that demands no photographs be taken, thus only being identified by a third nipple.

In reality, it's the stuff on top of said deformities that make Scaramanga easy to spot, with the Catalonian hitman opting for all-white suits with big wide collars and impeccably knotted ties and Cuban collars. An example of how we should all dress for our jaunts to lairs abroad (and yet another worrying example of physical deformity in Bondworld signaling malintent).

Because good old Auric is right on time 56 years after his on-screen passing, with the iniquitous magpie precipitating the rise of Tyler, the Creator, fluffy oversized Nirvana cardigans, and all things Prep 2.0. Commodifying women by way of gold spray paint is still really not OK, though.

Though not strictly a villain thanks to a last-minute switch, May Day's style from A View To Kill deserves a silver medal thanks to its sheer Grace Jones-induced madness. A particular highlight being this high priestess of Studio 54 habit that is second place only to Grace Jones hula-hooping onstage for the Queen's jubilee. YouTube it. Such content exists.

You're never fully dressed without a smile, screeched one wretched flame-haired orphan. But there is some truth in it, with Jaws flashing platinum whenever he opened his mouth to roar, or chew cables, or sever limbs or whatever it is an orthodontically-challenged henchmen does.

Besides, the practice of silver veneers are nothing new, with the Moonraker star in company alongside Kanye West, Lil Wayne, Katy Perry, and other stars with more money than sense. Hollywood smiles upon you, Jaws, and so too does the whole world.

The Friends Reunion is Expected to Make Almost $500 Million. For Just One Episode.
All Photos
Comments
View As List