Captain Marvel is made for your daughters, your wife, and a new generation of (deliberately female) fans, and you should still watch it.

Captain Marvel star Brie Larson famously said that she didn’t need a 40-year-old white dude to tell her what didn’t work about A Wrinkle in Time. That film wasn’t made for him, she explained, saying that she wanted to know what it meant to women of color, biracial women, or teen women of color. It’s a fair assessment and demand of the American film criticism landscape, which is statistically dominated by white men. Captain Marvel, the first film in the new chapter of the MCU, a preamble to Avengers: Endgame, is a film that isn’t made for those critics. The studio, cast, and crew have expressed or implied this at some point in some way.

It isn’t made for me. I’m a man in my mid-40s whose Captain Marvel either wore red and had a giant lightning bolt on his chest or died from cancer. Back then, Carol Danvers was Miss Marvel, whose genderbent version of the Kree hero Mar-Vell’s costume even had a stylish scarf. Danvers has now had the mantle of Captain Marvel for longer than Mar-Vell appeared in print and is rightfully, legitimately the one, true bearer of the name (the other guy in red—who has a movie coming out in April—lost that title legally decades ago). Sure, a black woman named Monica Rambeau was Captain Marvel in the ’80s, and Carol Danvers has been called Binary and Warbird at some point, but these details don’t really matter. Again, this film isn’t made for people like me. 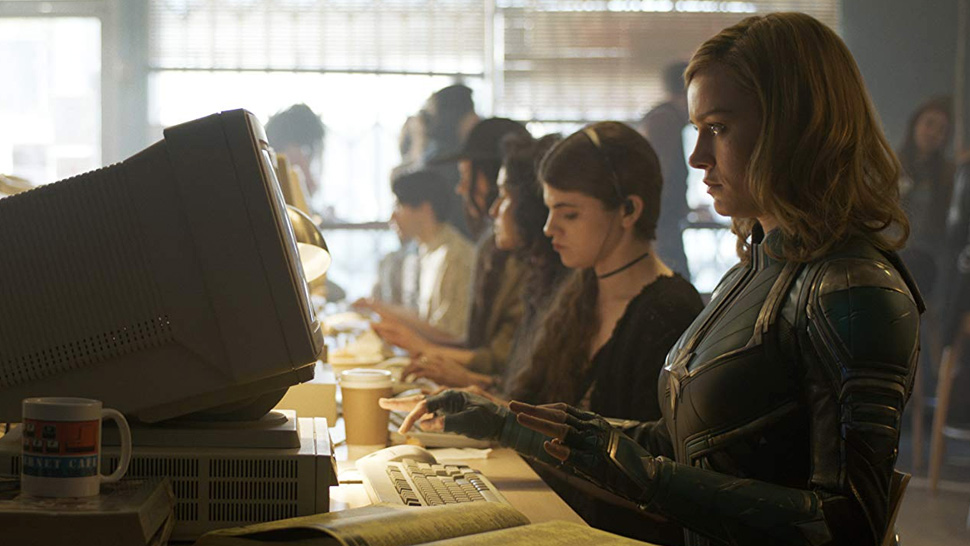 It’s made for my daughters, my wife. It’s made for a new generation of (deliberately female) fans for whom the comics and source material are irrelevant and for whom prior knowledge of Carol Danvers may be more of an encumbrance rather than an aid. Even Margaret Stohl’s 2018 retcon The Life of Captain Marvel has been discarded for something completely new and entirely unique to the film. This isn’t a deal-breaker. Adherence to the source material isn’t half as important as telling a good story, and in that regard, Captain Marvel lacks some polish.

It’s impossible to separate the film’s agenda of feminism from its story when the studio, it’s directorial pair of Anna Boden and Ryan Fleck, and most specially it’s star Larson have been very vocal about it. This agenda is not only inextricable from the property but necessarily intrinsic to a hero who was created specifically to be a feminist icon. It’s an important and relevant campaign that, for better or worse, at times eclipses the narrative flow of the film.

Set in the ’90s as a clever way to retcon and explain the absence of the earth’s most powerful hero from the past 10 years of MCU films, there are amusing nods to a bygone era of pagers and slow-loading Internet and the nostalgia gives the film a unique charm. But aside from a milieu devoid of smartphones and electric cars, the ’90s isn’t significantly a visually distinctive era compared to today. There are still beige computers with clunky keyboards like the one Carol uses at a dial-up Internet Cafe. Her grunge civilian ensemble with a Nine Inch Nails shirt and plaid flannel polo tied at the waist isn’t far removed from today’s fashion. Replace the NIN shirt with a Captain Marvel tee, and that outfit was, coincidentally, exactly what my 11-year-old daughter wore to the film knowing absolutely nothing of ’90s culture. The period setting contributes so subtly to the film that it would’ve benefited from a stronger soundtrack. 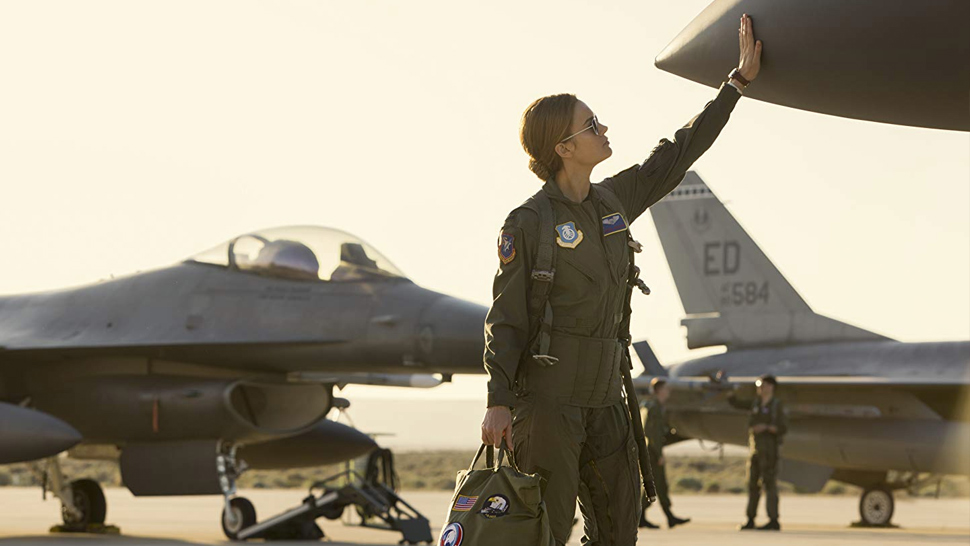 This isn’t to say that the song choices are bad. Certainly, No Doubt’s "Just A Girl" was absolutely perfect, as was Garbage’s "Only Happy When it Rains," but it’s telling when Guardians of the Galaxy can feel more nostalgically ’80s purely on its clever use of music while set pretty much entirely in outer space. Period soundtracks, like mix tapes, are tricky and take exceptional, sometimes surprising song selections to work and Captain Marvel’s selection of hits are nice but feel somewhat entirely predictable. Fortunately, the film contains twists and a little genderbending that it avoids being entirely predictable itself.

Some of the best parts of this ’90s-era prequel is seeing a less dour and digitally de-aged Nicholas J. Fury (Samuel L. Jackson) and a baby-faced rookie Agent Coulson (Clark Gregg). It also fulfills the mandate of prequels to provide amusing trivia and backstory to what viewers already know. How did Nick Fury lose his left eye? It’s answered right here in a manner that’s absolutely fitting with the tonality of the MCU. Where did the name ‘Avengers’ come from? That’s answered, too. Your mileage may vary on whether these questions are answered in a satisfying or contrived way.

The Marvel Studios opener is the best, most emotionally weighty one in the MCU. Filled with a montage of the late Stan Lee and ending with a heartfelt thanks to the man who largely shaped the Marvel world, audiences can look forward to at least one more cameo from the man himself. It’s a sweet moment and helps make this film special. It even ties directly to one of the more laughable criticisms against Academy award-winner Larson, who was knocked for not smiling in the trailers. The film cheekily lifts this misogynistic charge exactly and uses it in a scene, and the contrast is clear: Captain Marvel will smile whenever and for whomever she damn well wants. She owes nobody anything and doesn’t need to prove anything to anyone. 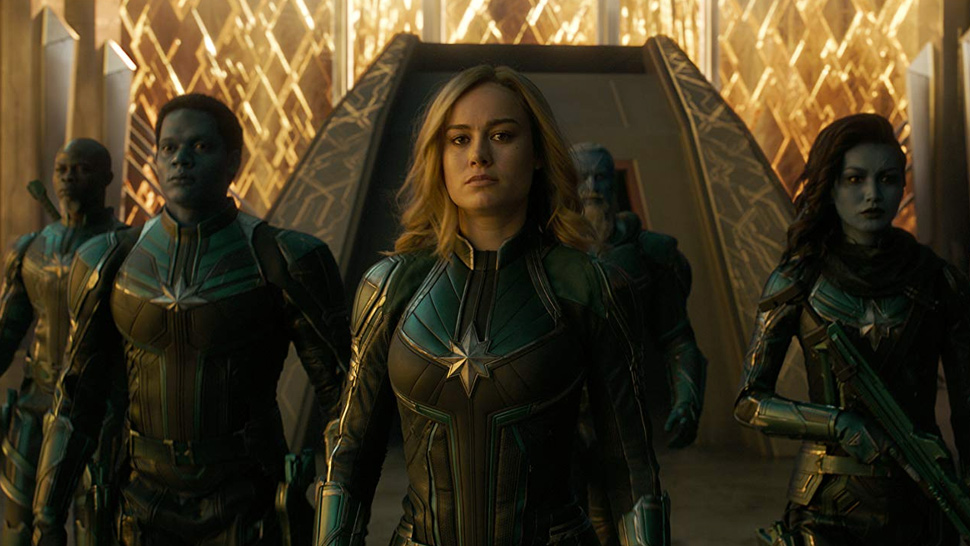 But for a hero’s journey to feel real, the hero at least needs to prove herself to the audience. On the other hand, Carol Danvers’ journey feels flat as she doesn’t quite go through the same struggle that most heroes go through. She morphs from extremely powerful to downright godly.  She is able to defeat scores of enemies with her hands literally shackled early on in the film.

That said, there is room for this type of hero. A character who, through a combination of luck, skill, and talent is simply better than everyone else. If you’re a fan of characters like Saitama or Super Saiyan God Goku, then you will love Captain Marvel. It’s important to note that there aren’t quite any female characters like her, which makes it a niche that needs to be filled. As Larson puts it, there are enough seats at the superhero table and there’s one for Captain Marvel at its head. She’s simply unstoppable and at no point during the film do you have any sense that she could lose. Even the obvious weakness of being vulnerable through her friends and allies feels empty, first because you know Nick Fury will survive and second because Captain Marvel at full binary is just god-like.

Carol Danvers is not an endearing character. She doesn’t have to be. She’s a soldier and she acts like one all the time. Despite the occasional buddy cop exchange between her and Fury, Carol’s demeanor is kickass and haughty. As the Kree warrior Vers, she banters with her superior Yon-Rogg (Jude Law) more as an equal than as a subordinate in a military unit. She carries herself with an air of superiority, an assuredness similar to that of Thor in his debut or that of Star-Lord’s facade of overconfidence. In Danvers’ case, however, it’s a real power that’s purposely kept in check for most of the film so the third act can be spectacular. And spectacular it is—Captain Marvel unleashes a lightshow that’s unapologetically over-the-top. 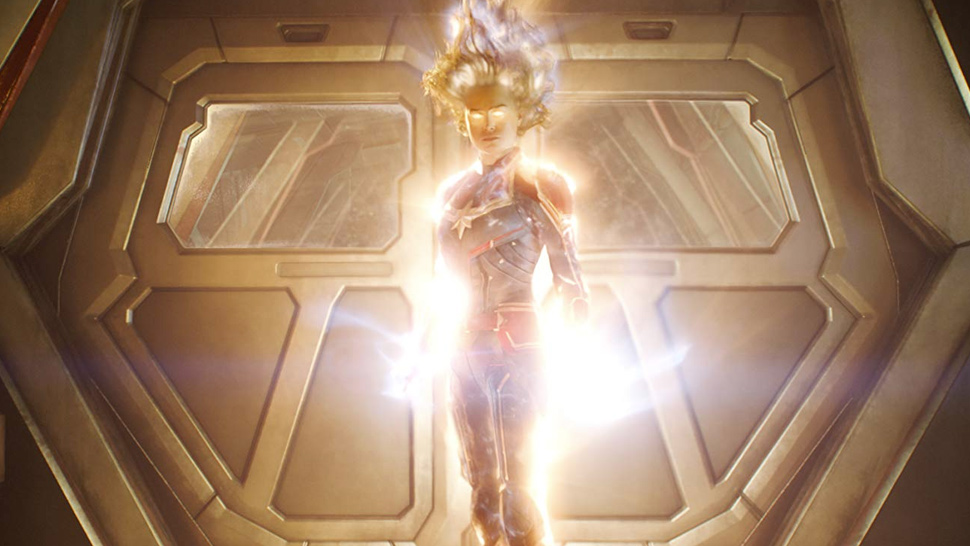 It’s feminist through and through. From a throwaway joke that renders ‘human males’ as posing little to no threat to combative single mom Maria Rambeau (Lashana Lynch) swatting away seemingly innocuous comments—she tells off Nick Fury for calling her flying ‘nifty,’ which one would think an altogether harmless adjective—Captain Marvel makes good on its promise to push the feminist agenda. It opens in the United States on International Women’s Day, further reminding everyone that it wasn’t made for men. This isn’t to say that men can’t enjoy the film because it’s still entertaining. Ben Mendelsohn as the shapeshifting Skrull Talos is an amusing if ultimately ineffectual adversary and Goose, the cat, is, well, something for everyone who enjoys cat memes on their feeds. Even Annette Bening as the Supreme Intelligence gets her groove on to "Come As You Are," and its fun.

It champions feminism, giving women and little girls everywhere one more hero to see themselves in up on the big screen. As praiseworthy, necessary, and important as that is, it doesn’t excuse the film from narrative flaws that every movie, regardless of agenda, need to overcome. In fact, the one part of the film that underdelivers is its treatment of Maria and Carol’s friendship, which is given short shrift with mere flashbacks and the entirely awful pivotal moment where Maria tells Carol about the awesome things she’s done as a woman and friend. As a viewer, one can’t help but feel cheated out of a truly good female relationship play out. Instead, audiences get the Cliff’s Notes of their bond and we’re supposed to just go with it.

Another missed opportunity is giving more gravitas to Carol’s growth through adversity. There’s a beautiful, stirring montage of Carol Danvers rising up each time she falls, but there isn’t enough of it set up early on that when it finally happens, it feels cheap and unearned. That said, it’s still one of the film’s best moments, followed closely by the first post-credits scene (there are two) which helps us segue into Avengers: Endgame in April.

Captain Marvel isn’t made for 40-year-old men, or even males in general, and that’s okay. Just as Black Panther was made to celebrate African people and culture, Captain Marvel is aimed at women and girls. Despite this, or maybe even because of it, Captain Marvel manages to be entertaining, anyway. It’s particularly powerful for young girls, who finally get an unstoppable hero with no apparent weaknesses. A hero who is cocky, almost arrogant, unapologetically independent, and does not show tenderness or vulnerability. She doesn’t even fawn over a cat (Nick Fury does). We have those types of male superheroes, so why not have a female version, too? Captain Marvel is quite unlike any female hero we’ve seen yet, and another bold step towards a more inclusive, representational superhero universe. 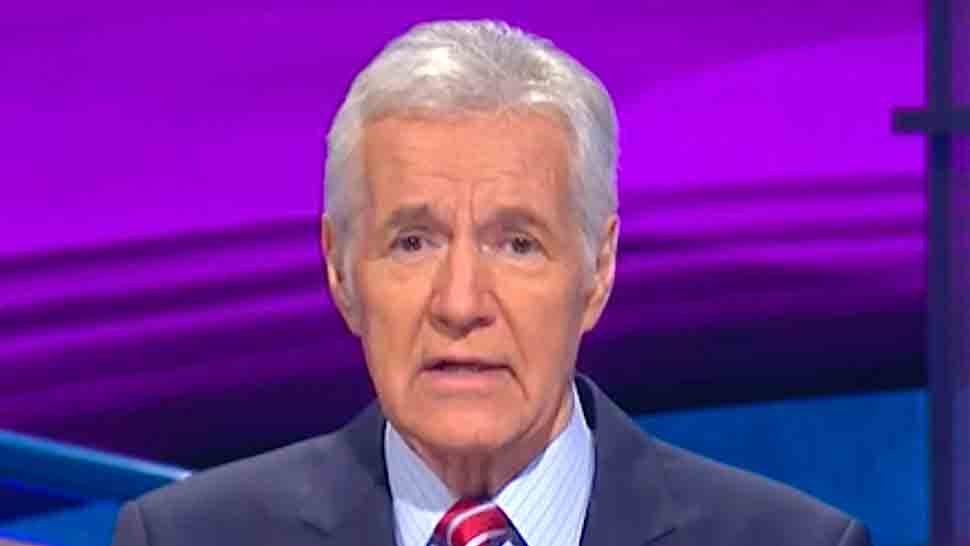 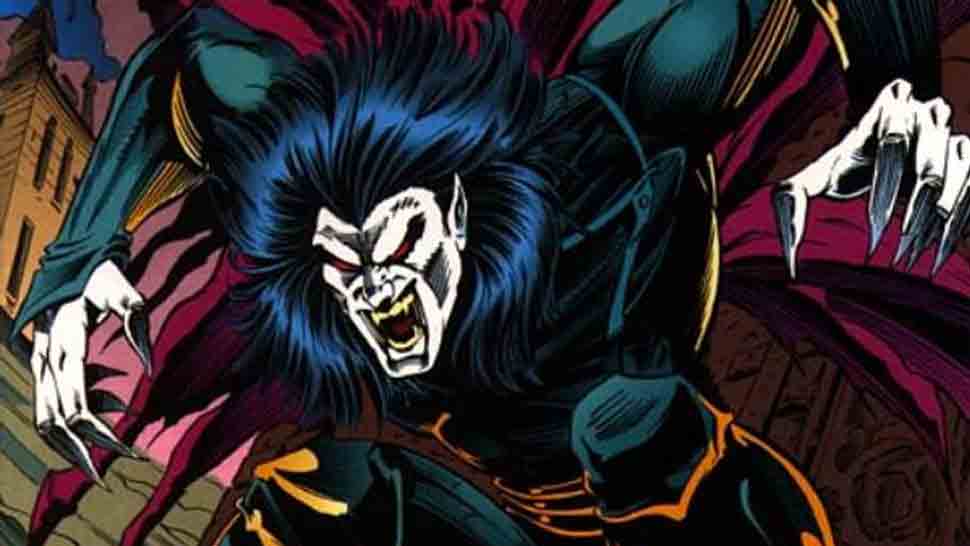