Meet the Artist Behind the Nostalgic Digital Comic 'Comedians Reborn'

The 34-year-old comic artist is also a full-time policeman.

When the cover of the digital comic series Comedians Reborn was posted on Facebook earlier this month, it immediately went viral on social media, with several news agencies picking up the story.

The cover, an eye-catching and colorful work of art, brought together 34 of the Philippines’ best comedians of all time. All of them have already passed away, but before they did, they all gave their Filipino audiences a good laugh. 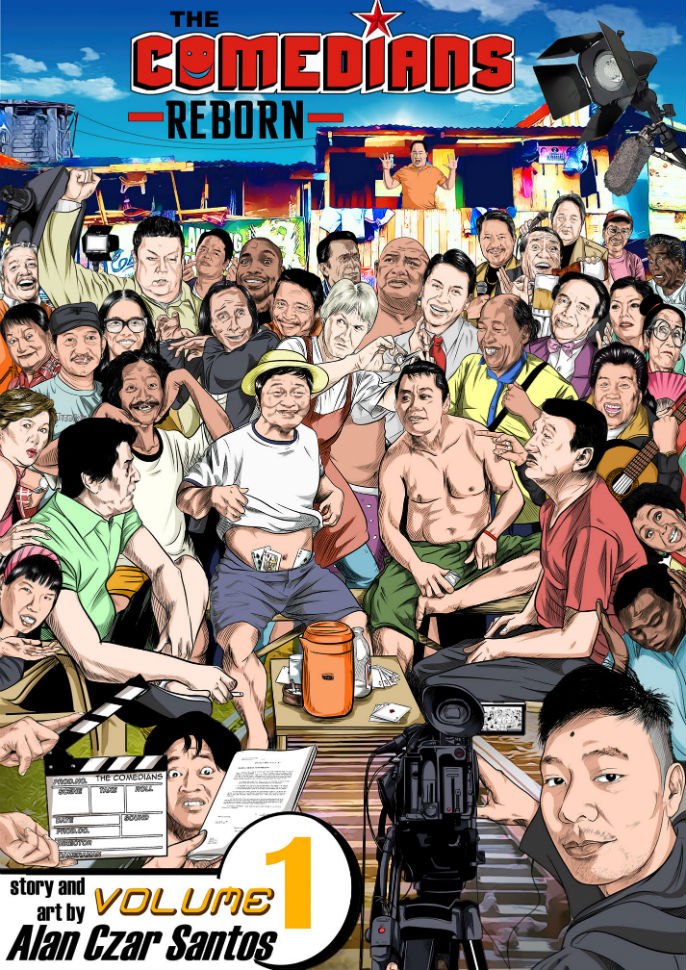 “This comic/work is to honor and to give tribute to those talented, astonishingly funny and brilliant late comedians who made us laugh, who we grew up watching over and over again. They brought us so much laughter, joy, and made such a big impact [on] our childhood lives. Their jokes will always be missed and NOW THEIR LEGACY CONTINUES…” the Facebook post read.

The cover is a who’s who of the comedy scene in the Philippines, with the King of Comedy Dolphy, Babalu, and featured at center.

Even Bentong and Chokoleit, who recently passed away in February and March of this year, respectively, were included.

At lower right, however, is a man holding a video camera. While he’s not a comedian like the others, he is responsible for bringing these characters back to life. This is Alan Czar Santos, the creator of the Comedians Reborn series.

“I want to create a world or universe where late actors will [be brought] back to life. So in that perspective or platform, their memories will live on and their contributions will be remembered,” he explained in an interview with Esquire Philippines.

But Santos is not a full-time comic artist. He’s a police officer currently assigned at the Manila Police District.

“No, it isn’t hard. I’m doing my duty on time and if I have free time then I’m doing the art,” he shared. “Doing art is because it needs to have the correct emotions, especially on their faces,” he added.

Santos is a graduate of Business Administration with a major in Marketing from the Polytechnic University of the Philippines. He also finished Criminology at Araullo University, which brought him to his current profession. “But when I was still a kid I was already making art,” he said. Santos is also a member of the Philippine National Police’s (PNP) newspaper editorial board as a regular cartoonist.

Comedians Reborn is Santos’ second comic series, following his first work, , which he started 2016. He posted the first volume of the series in February and already has a third volume in the works.

For Pulisman, Santos draws inspiration from his own experiences as a member of the police force. He has been with the PNP for eight years and is currently serving as a Police Officer 2.

“I created the Pulisman comics to represent the life and hardships of a typical police officer, from training to the very function of the work,” Santos said.

The first volume of Comedians Reborn is already available on its official Facebook page. He is also planning to create the (antagonists but said they will just be incorporated in the Comedians Reborn series.

While Santos enjoys making art and drawing comics, he takes greater pride in his profession as a police officer.

He says he treats his comics as merely something he can do on the side, and has no concrete plans regarding the series, despite the fact that it’s becoming increasingly popular.

“I’ll only post it online for free on my page. We never know [how long it will run, but] as long as there are readers it will run continuously,” he said.

When asked if he would ever leave the police force to pursue comics, his answer was firm: “Nope. I can do both. I need to serve and protect the people more by my work as a police officer. I’m able to keep them [the readers] entertained by the comics anyway [without leaving my job],” he said.