Dissecting Hawkeye’s Mid-Life Crisis (And What It Means For 'Avengers: Endgame')

The hair, the tank top, the absolutely berserk tattoo.

The new teaser for Avengers: Endgame dropped yesterday, and the main takeaways were that while everyone's sad, everyone's also girding themselves to launch into a last-ditch attempt to undo all the havoc Thanos' finger-snap did to their mates.

You'll have noted that it's subtitled as the 'Special Look' trailer, and there certainly is one extremely special look in there: namely, Hawkeye's transformation into a man who's reacted to the divorce by buying a moto trike to finally do Route 66 like he always said he would.

That undercut, which crossed Glass Spider-era David Bowie with Pink!'s severe fauxhawk, was midlife crisis-y enough. But teamed with that tank top and the grunge tats? Heavens above. He looks like he should play bass in Appetite 4 , the north-east's premier Guns 'N' Roses tribute band.

There is one school of thought that this intense glow-down and scuzz-up could be Hawkeye's reaction to having had his family dusted by Thanos, which would obviously bum you out. Would it bum you out to the extent of dressing like a bloke who splits his weekends between looking at knives in army surplus stores and posting on MMA forums? Debatable.

There's something to be gleaned from a dive into that tattoo. On first glance, it appears to be an Aztec-inspired design, but look closer and you can see that it's some sort of samurai skull, which would accord with the shots of him in Japan from previous trailers. Look at this group shot too.

He's so skeptical, so aloof. "Tchuh," he seems to be saying, "these idiots don't know the half of it. My daughter exploded to bits in my arms. I've spent the last six months trying to get my wife's ashes out of the bathroom rug. Absolute bloody murder." So, confirmation that his family is dead? Definitely. 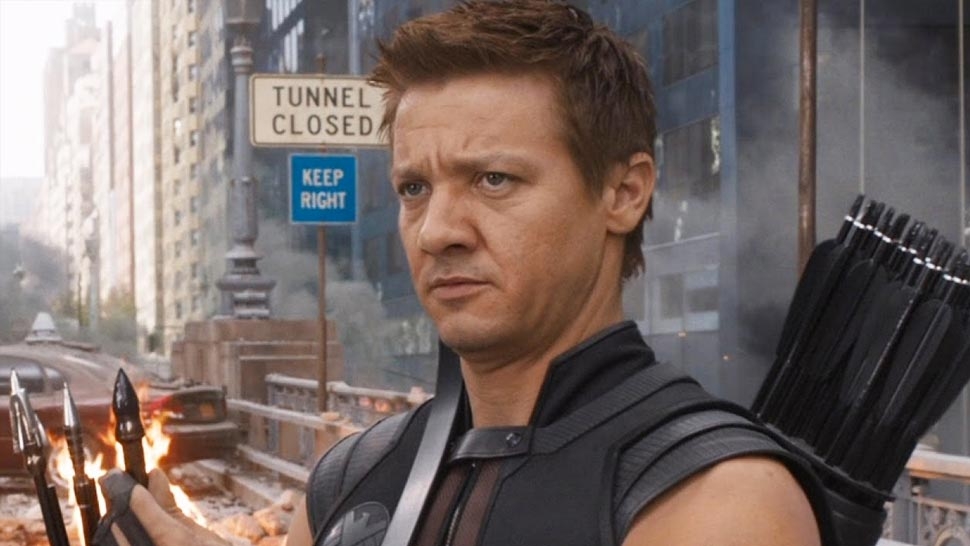