The Hangover and Community star talks about the importance of representation, directing, and a good antacid.

Most people's introduction to Ken Jeong was likely when he was naked, straddling Bradley Cooper's face and beating him with a crowbar. That was in 2009, when The Hangover went on to gross nearly $500 million at the box office. This wasn't Jeong's first film role, but it definitely launched his career in some of the biggest comedies of the 2000s. Since then he's spent the last decade making every role—even just a few minutes of naked screen time—into the most memorable of any TV show or movie he's in.

His latest role is as Goh Wye Mun in Crazy Rich Asians, one of the most anticipated films of 2018, which is already looking at a $25 million opening weekend. Jon Chu's adaptation of the novel of the same name is very much a rom-com, but it's also a film about family and culture and tradition. Constance Wu leads the cast as Rachel, a NYU professor who has come to Singapore with her boyfriend for a wedding where she meets his entire disapproving family. Jeong plays the father of Awkwafina's character, a former roommate of Rachel's from college.

Though his role is small, Jeong does what he does best—squeezing the most out of his time in front of the camera. And Crazy Rich Asians is an important moment for both Jeong and Hollywood, as it's the first film since The Joy Luck Club 25 years ago to have a majority Asian-American cast. And in his scenes in particular, Jeong makes a pointed joke about using a fake Asian accent, which speaks to decades of representation in Hollywood.

When I meet with Jeong—thankfully, fully clothed—outside of a shoot in New York, he tells me how the project came about so organically that you'd wonder why it didn't come along sooner. He's hanging around, joking with the rest of the cast, asking for a selfie with his on-screen daughter Awkwafina, who shuts him down. Once we sit down, we chat about his over the top role, crying in public, and playing doctor on the set of Community.

ESQ: Crazy Rich Asians comes out today, but I know you have been doing press forever now.

Ken Jeong: The response nationwide has been—it’s been emotional, man. Especially in Miami. That might have been my favorite city because it’s amazing to see the Latino community just really embrace the movie, to be honest. And finding the parallels of family and love and sacrifice. I was with Awkwafina and Nico Santos on that tour, and we were looking at each other thinking, “This is really special.”

There’s been a lot of discussion about whether the film was cast appropriately or how the film has captured Asian culture, but ultimately, the film's existence feels like the most important thing.

Yeah. I quote Constance Wu. She’s on two landmark projects right now: Fresh Off the Boat and Crazy Rich Asians. She says, “Look, I’m in these two projects, and I know this isn’t for everybody, and it doesn’t represent everybody in the Asian community. It’s really to open and ripple out so that other Asian filmmakers can have their voice heard.” I think that, to me, is the ripple effect.

I’ve been fortunate to work with some amazing Asian filmmakers in independent film. People like Jennifer Phang, who I worked with on this movie that went to Sundance called Advantageous. I was one of the producers on that movie, and it won a jury award. This movie is for people like her. She needs to make a studio movie. That’s where the passion for this, as an Asian-American in the business, comes from. I’ll quote Nico Santos, “Rising tides raise all ships.” This movie succeeds, and we all succeed. I’d feel exactly the same way, even if I weren’t in the film.

My wife and I are huge fans of the books. We read them years ago. When it was made into a movie, I connected with Jon Chu, the director, and I didn’t even know if I could do the movie. I just said, “Whatever I can do to support it, I’ll be there for you.” I knew this could be something special. 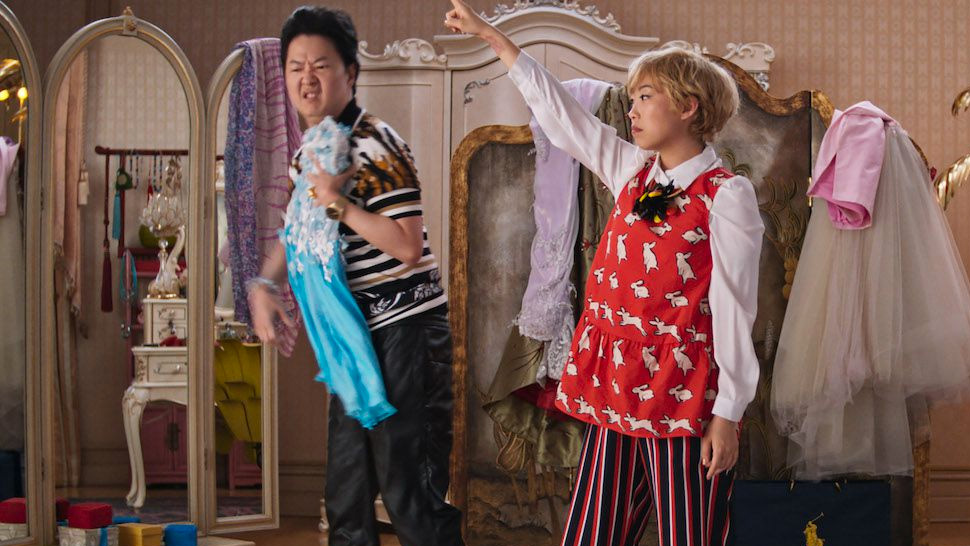 One of my favorite things about you is that your characters aren’t always the leading role, but by the end, you’re the star. I’m a huge Communityfan. You always steal the scene.

I think I’ve been fortunate to be in a position to work with amazing writers and directors where I’m allowed to shine. Community was a very important part of my growth as an actor. I see it as my acting school, not having a lot of formal acting training. You can’t help but get good when you’re working with people like Joel McHale, Jim Rash, Gillian Jacobs, Yvette Nicole Brown, Danny Pudi, Donald Glover—everybody. Everybody I just mentioned is a big star.

Yeah, it’s an all-star game. It’s funny because the [Crazy Rich Asians] cast reminds me of Community because when we all hang, we have this WhatsApp chat group that’s like 100 people. It’s like Community on steroids. We have people from Singapore and people from Australia, and we’re all in this chat.

What I love about Crazy Rich Asians is that it scratches a lot of itches. If you don’t love rom-coms, that’s fine—because there’s so much more to it.

Credit goes to Jon Chu for allowing every single actor to have their own distinct character. Every single actor has a different style and approach to their character. He’s like this master producer that’s synthesizing all these different kinds of music that’s forming this symphony of diverse Asian characters in a film. It’s not lost on me, and when you see the aggregate of it, it’s amazing. He’s just such a good, decent person. And Kevin Kwan. For him to allow for that creative room to explore—it’s been an organic flow.

I was in my car going to the afterparty with my wife, and it hit me. I just started crying because to be in a theater with 1,000 people and realize this is actually happening. It was an emotional night. And I still get emotional seeing the movie. The wedding scene is one of the most beautiful wedding scenes I’ve ever seen.

Oh, I’m a wedding crier. It’s really embarrassing for me.

Me, too. It’s just beautiful. And the end scenes? To Coldplay’s “Yellow.” Everything about it is so original and wonderful. Someone wrote on Twitter after that wedding scene that person cried. That person who is Asian-American said that every person they watched and cared about in the movie up to that point was Asian, and as an Asian-American, it’s an emotional experience. Even promoting it has been wonderfully emotional.

There’s a lot in the film that that’s feels special, even if you don’t fully understand the exact cultural significance. You can just tell that it’s a special touch. Do you know what I mean?

To me, as a fan of the book, I had faith in the script and the source material that this would be accessible to all because it comes from a place of cultural specificity that is a universal tale, so it’s the best of both worlds. It’s very culturally specific in that it explores the world of Singapore, but doing it in a format that is universal. I think that’s the beauty of the book, and now it’s the beauty of the movie.

My favorite scene is when the audience first meets you at the dinner table. Even though The Hangover is great, your character is very much built from a stereotype. And this character gets to poke fun at that with a fake-out-accent.

That was a last second switch. Jon Chu is wonderful and let me improvise—me and Awkwafina. So, all of that was improvised. What I liked in working with Jon is that we were so relaxed that day and talking about the character and how native he is. He studied in the States and we were both like, “What if I do a misdirect and have this little tweak?” Now that I look back at it, it was kind of bringing back the over the top comedy I’m known for and giving it a dose of humanity. In real life I’m the father of two girls. In my show Dr. Ken, I had experience playing the straight man. So if you kind of blended both worlds, it was kind of cool to play that.

You and Awkwafina seem nuts together, too.

I love working with Nora—Awkwafina—because we hadn’t met prior to [filming], but we were on the same page comedically. We’re always doing bits. We become very close, and we both come from the same silly place, and really it’s one of my favorite scenes I’ve ever done, period.

I have to ask you. I’ve read about how being a doctor previously plagues you, even though you don’t practice anymore. Is that still haunting you?

One of my favorite stories I don’t think I’ve told before was on the set of Community. Danny Pudi was being dared to eat all this candy and then hot dogs and tabasco sauce, ketchup, and mustard. I think he was just eating the packets. The rest of the cast was daring him to do it, and then I was the voice of reason saying to Danny, “Maybe be careful. Maybe take a Zantac after that.” And he said, “I’m fine, I’m fine.” Then I think like a half hour later, he came to my trailer like, “Do you have any extra Zantac, “ and I was like, “Yes, yes, no problem.” I’m this understanding doctor like, “Maybe take it for seven days, in case you have residual reflux.”