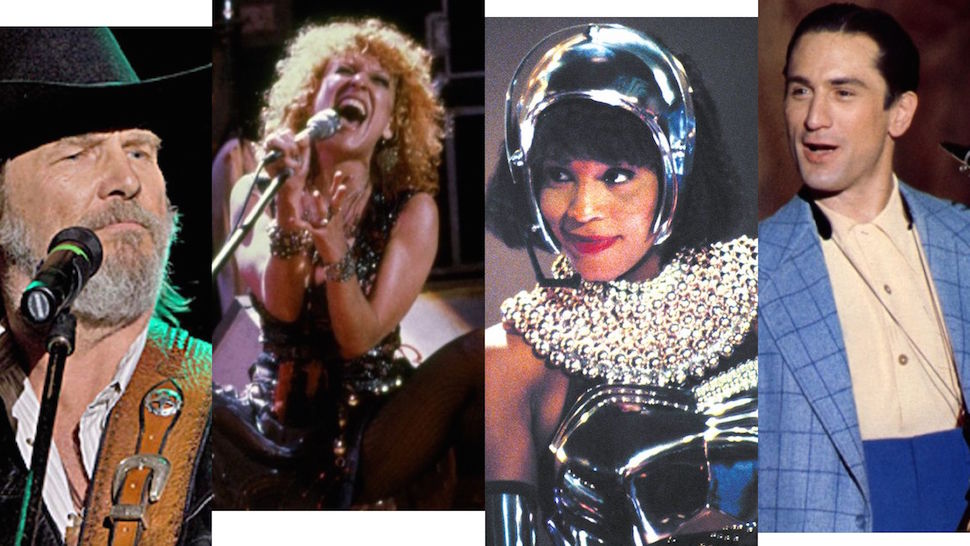 A Star Is Born is one of the most anticipated movies of the year, and it's understandable why: It boasts Lady Gaga's film debut, as well as Bradley Cooper's first time in the director's chair. But it's also the third remake of a classic Hollywood film (and the third musical retelling after the 1954 version starring Judy Garland and the 1976 version starring Barbra Streisand). It's essentially the Star Wars of showbiz melodramas, a behind-the-scenes look at the rise of a fresh young (female) star—and the demise of a haggard, older (male) celebrity—that keeps being made over and over again.

The A Star Is Born format has been modified countless times by movies that do not share its famous title. Simply put: We are obsessed with stars, and we love movies about them. Here are ten movies that are in the A Star Is Born family—featuring self-abusive country singers, existential ingenues, and real-life pop stars proving their acting chops.

Gugu Mbatha-Raw stars as Noni Jean, a British pop star about to have a career breakthrough in the U.S. Despite being primed for stardom, Noni finds herself overwhelmed by the imminent success. When she comes close to ending her life, she's saved by a young police officer (played by Nate Parker)—and the two fall for each other despite the executives behind Noni's career trying desperately to keep them apart.

Sissy Spacek's Oscar-winning performance as country legend Loretta Lynn is just one of the great parts of this biopic, which pretty much set the standard for the genre. Married at 15, a mother of four by 19, and a country radio star by 28, Loretta Lynn defied any expectations she had for her own success. The film, which features Spacek's own singing voice, is a crowd-pleasing music epic and features incredible performances from Tommy Lee Jones, Beverly D'Angelo, and Levon Helm.

Jeff Bridges finally won an Oscar for playing a downtrodden country singer who tries to turn his life around through his own songwriting and a relationship with a young music journalist (played by Maggie Gyllenhaal). He tries to revamp his career by rekindling a friendship with a more successful star he once mentored, but soon his alcoholism proves to be the biggest obstacle in his path to redemption.

Robert Duvall won an Oscar for playing Mac Sledge, an (you guessed it!) alcoholic country singer who is trying to make up for his poor life choices through a spiritual redemption. On that route he's torn between his estranged ex-wife (a country singer played by Betty Buckley) and a young Vietnam war widow and single mother (Tess Harper).

Gwyneth Paltrow picked up a guitar to play Kelly Canter, a country music singer who—hold on to your cowboy hats—is in recovery for alcoholism. As she plans her comeback, her record executive husband (Tim McGraw) signs an up-and-coming former beauty queen named Chiles Stanton (Leighton Meester), who serves as a professional rival for Kelly (and attracts the attention of her husband).

Originally intended as a Janis Joplin biopic before her family refused to give up the rights to her story, The Rose marked Bette Midler's film debut (and earned her an Oscar nomination). Midler stars as Mary Rose Foster—nicknamed The Rose—a rock 'n' roll diva whose hard-living and rocky relationships obscure her onstage talent.

Another vehicle for a pop star to make her big-screen debut, Lady Sings the Blues stars Diana Ross as the jazz great Billie Holiday (and, like most of the stars on this list, she earned an Oscar nomination for the performance). Co-starring Billy Dee Williams and Richard Pryor, the biopic follows Holiday from her humble roots, to stardom, to her subsequent heroin addiction and career comeback.

While it doesn't involve a pop star's rise or downfall, The Bodyguard offers Whitney Houston's film debut, a surprisingly believable love story between the singer and her on-screen bodyguard played by Kevin Costner, and a tense plot in which the titular character must protect the performer from a crazy fan. Plus, it gave us her stunning cover of Dolly Parton's "I Will Always Love You."

Martin Scorsese tried his hands at the move musical with this melodramatic (and often overlooked) romance between a pop singer (Liza Minnelli) and a jazz saxophonist (Robert De Niro). The pair's relationship becomes rocky as her career blossoms and his remains stagnant—making the comparison to the Judy Garland-James Mason A Star Is Born almost impossible to avoid. (Liza's performance of "But the World Goes 'Round" is strikingly similar to her mother's performance of "The Man That Got Away.")

You can't make a list of movies like A Star Is Born without including one of the previous versions of the film. The 1954 musical version is the one to watch, as it set the standard for the films to follow. While James Mason's mentoring character is an actor instead of a country musician, Judy Garland gets to pull double duty; she delivers not only a stirring performance as an actor (she earned an Oscar nomination for this one), but she also offers some of the most gorgeous musical moments of her film career.