Debbie is no Danny.

The first thing that struck me about Ocean's 8, the sequel to Steven Soderbergh’s remake and eventual trilogy of the rat pack film Ocean's Eleven, is that it was given a rating of R-13 by the MTRCB. There’s no sex, violence, nudity, or drug use, but I actually think the MTRCB made the right call: Debbie Ocean (Sandra Bullock) and her crew aren’t good people and younger kids are probably better off not seeing them on the big screen.

It’s always important in a heist movie or any film that features a criminal protagonist to elicit sympathy from the viewer by portraying the antihero as having a good side. From Robin Hood to Suicide Squad’s Deadshot—a thieving outlaw and a contract killer, respectively—the narrative is crafted to show that there’s an underlying noble cause or genuine human connection. In the case of Debbie Ocean, Danny’s younger sister, she’s just a horrible human being who’s incredibly and unapologetically skilled at defrauding people, and it’s uncomfortable to watch.

The film opens with Debbie getting out of prison on parole, echoing the start of Ocean’s Eleven. This, of course, after she acts her way out of the evaluation process, immediately revealing her true colors as soon as she’s out the gate. Director Gary Ross (Hunger Games) employs many of Soderbergh’s techniques, from leading audio, to jump cuts, flashbacks, and even the drum-and-bass soundtrack, so that Ocean’s 8 feels like a true spiritual successor to the franchise. But Debbie is no Danny: She’s petty and shallow, and the first thing she does out of prison is shoplift and con her way into a getting a swanky hotel room.

She reconnects with her version of Rusty, her old partner Lou (Cate Blanchett), who rocks skintight latex pants like nobody’s business, and wastes no time in gathering a team to pull off a heist involving a $150 million diamond-studded Cartier necklace at the Met Gala. They assemble a crew consisting of hacker Nine Ball (Rihanna), suburban mom and fence Tammy (Sarah Paulson), pickpocket Constance (Awkwafina), jewelry-maker and appraiser Amita (Mindy Kaling), and over-the-hill fashion designer Rose Weil (Helena Bonham-Carter) who’s roped into the criminal life because of bankruptcy. 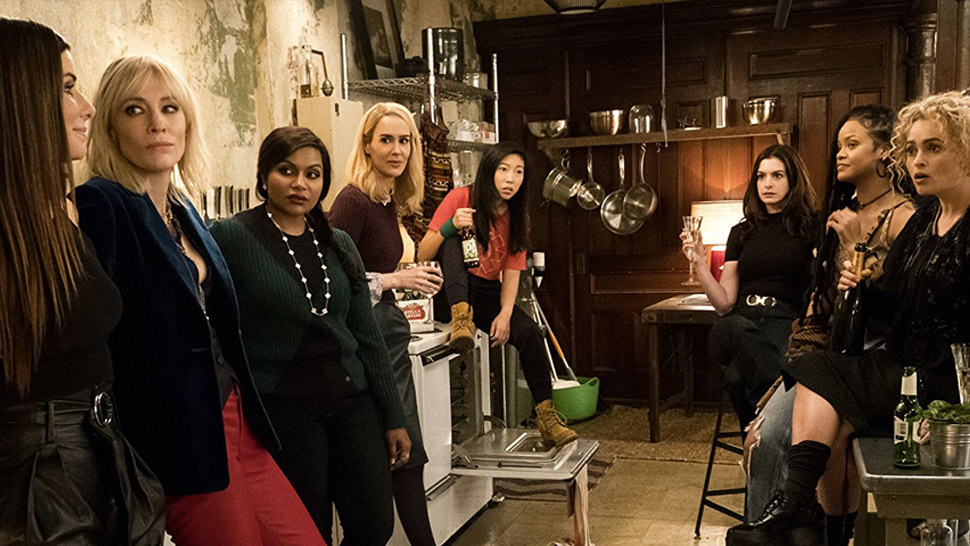 There’s high fashion, glamour, and numerous cameos, from Katie Holmes to Common to Kim Kardashian to Anna Wintour. Ocean’s 8 is a glitzier, more fashionable, female version of the Ocean’s trilogy, and it feels like it's designed to appeal to feminine sensibilities. In which case it’s problematic, because it’s revealed midway that Debbie’s whole plan was hatched as a way to get back at an ex. Never mind that her ex, art dealer Claude Becker (Richard Armitage) framed her and got her sent to prison—did the plot really need an ex-boyfriend angle?

Perhaps it isn’t a fair comparison, considering Danny Ocean (George Clooney) also had a shallow, personal motive to win back his ex-wife, but Becker just doesn’t come off as greedy or unscrupulous an antagonist as Terry Benedict from Ocean’s Eleven or Willy Bank from Ocean’s Thirteen. Becker’s general smarmy douchebaggery doesn’t feel like a worthy match for a woman of Debbie’s caliber, let alone her entire team. It would’ve been an opportunity to prove that Debbie is the better Ocean.

Their scheme revolves around the theft of a necklace worn by the world’s hottest ingenue, Daphne Kluger, played by an Anne Hathaway who seems to be parodying herself. Hathaway is a delight to watch and steals every scene she’s in. It’s clearly an all-woman, all-the-time show and Debbie even emphasizes the point by telling Lou that she doesn’t want a ‘him’ on her team because a ‘him’ gets noticed and women are invisible. The tongue-in-cheek irony being that Daphne Kluger is the most noticeable and visible person in the whole film.

The story, written by Ross and Olivia Milch, runs briskly and proceeds with little complication. The team execute the plan as effortlessly as they pull off wearing fancy gowns at the Met Gala, and that’s part of the problem. The stakes are so low that there’s nothing to root for. Bullock plays against type, being calm and collected throughout. This is no fidgety, unsure-of-herself, underdog Bullock; bwe have an in-control, debonaire Debbie Ocean, which is great for feminism but terrible for storytelling. 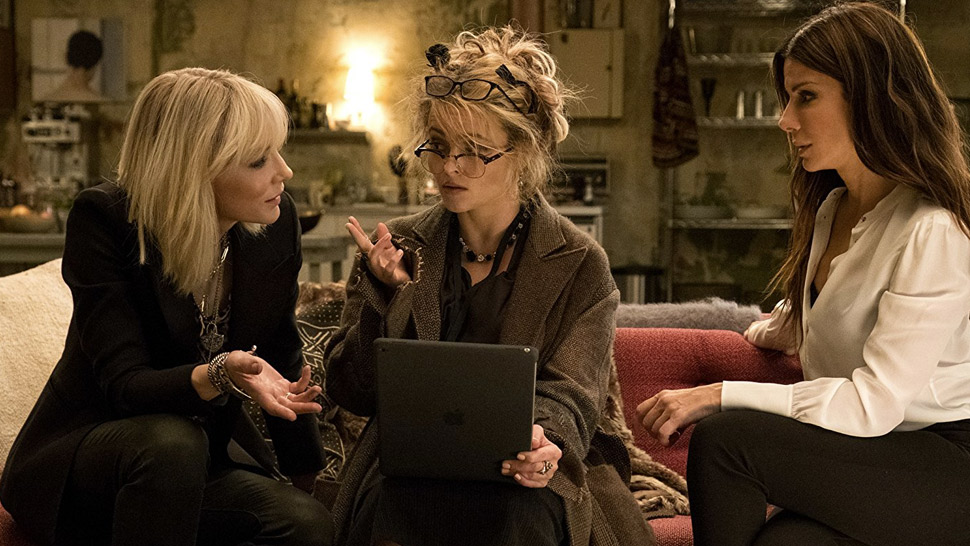 Speaking of feminism, Ocean’s crew sets out to be an example for young girls everywhere. Debbie states it explicitly in her pre-heist pep talk and Cate Blanchett jokes about it during the film’s press tour. But in 2018, where audiences are surrounded by thievery and dishonesty in real life, Ocean’s 8 suffers from its lack of a moral core.

In the Ocean’s trilogy, there’s still a sense that Danny and his crew are on the right. Danny serves some time for violating his parole, and in Ocean’s Twelve, they pay back Benedict (albeit through more robbery). In Ocean’s Thirteen, Benedict’s share is donated to charity, gamblers win, and even the poor reviewer is made to win millions to make up for the abuse the Ocean crew put him through. It never feels completely selfish or empty.

In Ocean’s 8, even the insurance fraud investigator (James Corben) becomes complicit to the crime. Becker isn’t enough of a bad guy or a threat for audiences to get fully on board with grand larceny. Not only that, the eighth member of the crew confesses to taking part in the heist all because she’s bored and needs friends. To top it off, the eight employ elderly women to fence stolen goods, essentially making them willing accomplices. It’s inspiring to both young and old!

The film is stylish, smooth, and is even enjoyable in parts. But the heist itself was underwhelming. For a feminist take on the franchise, it’s disappointing that the most exciting part of the job was actually done by a man. The cameo of “The Amazing” Yen (Shaobo Qin) should delight fans, but it makes you wonder why the decidedly anti-‘him’ Debbie Ocean couldn’t have gotten a woman to do it. The title’s numbering and mystery about Danny’s fate leaves little room for doubt that this is planned as a trilogy, but as Reuben (Elliott Gould) tells Debbie at the start of the film, sometimes it’s enough to know that one can do the job. They don’t actually need to do it. 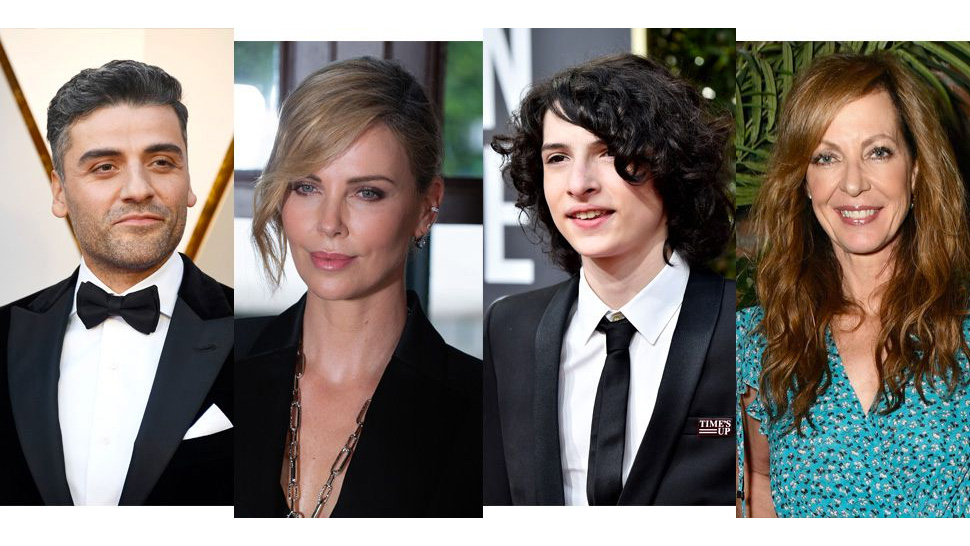