'Shazam!' is a Magical Superhero Movie That Lifts the Darkness From the DC Universe

DC's superhero movie Shazam is also about the relationship between parent and child, a love letter to foster parents everywhere.

Shazam!, the newest superhero movie from Warner Bros studios, is so bright, hopeful, and funny that it is essentially the antithesis to everything director Zack Snyder tried to build.

For the better part of the last six years, the DC extended universe has been architected by Snyder, giving rise to a slew of grimdark superhero films that were visually stunning and stylistically impressive, but largely missed the mark with the moviegoing public.

For all of Snyder’s directorial (and casting) brilliance, there was one essential and troubling flaw: Snyder had an abysmal grasp of heroism. His understanding of heroes not only embraced fallibility, it necessitated compromising values. As a result, the DCEU served up powerful but distorted versions of Batman and Superman, later of course corrected—for better or worse—in the tonally disjointed Justice League, a Frankenstein’s monster of a film that attempted to excise Snyder’s somber influence over DC films by bringing in Joss Whedon near post-production.

Some fans have clamored to have Snyder’s cut released, an unsullied version of his vision confirmed to exist by Snyder himself, after its conspicuous absence during the recently concluded three-day fundraiser that showed the director’s cut of three of his films. But with recent DC films moving away from Snyder’s desaturated bleakness and finding more success in the joy and optimism exuded by the truly wonderful Wonder Woman in 2017 and the epically adventurous Aquaman last December, it’s hard to fathom why anyone would want to revisit Snyder’s grimdark and depressing vision.

With Shazam!, DC finally embraces the utter joy of superheroes and reaffirms to audiences that it understands what makes heroes truly heroic.

The movie follows the story of Billy Batson (Asher Angel) who inherits the power and responsibility of an ancient wizard (Djimon Hounsou) tasked with guarding the world against the Seven Sins. Billy is only “basically 15” years old, though, and transforms to an adult version of himself (Zachary Levi) to combat the forces of evil. It’s basically Big on superhero steroids or, more accurately, padded spandex. Levi packed on some muscle for the role but still needed some foam stuffing in order to fill out a deliberately cartoonish silhouette.

Billy is a foster kid who’s ditched foster home after foster home in search of his mother, who lost him at a carnival when he was a little boy. The film centers on his relationship with Freddy Freeman (Jack Dylan Grazer), a partially disabled boy of the same age in his newest foster home. Freddy is a hopeful, goofball superhero fanboy who idolizes Batman and Superman, and plays the perfect foil to the cynical, street-hardened Billy, who doesn’t believe in the need for a family. 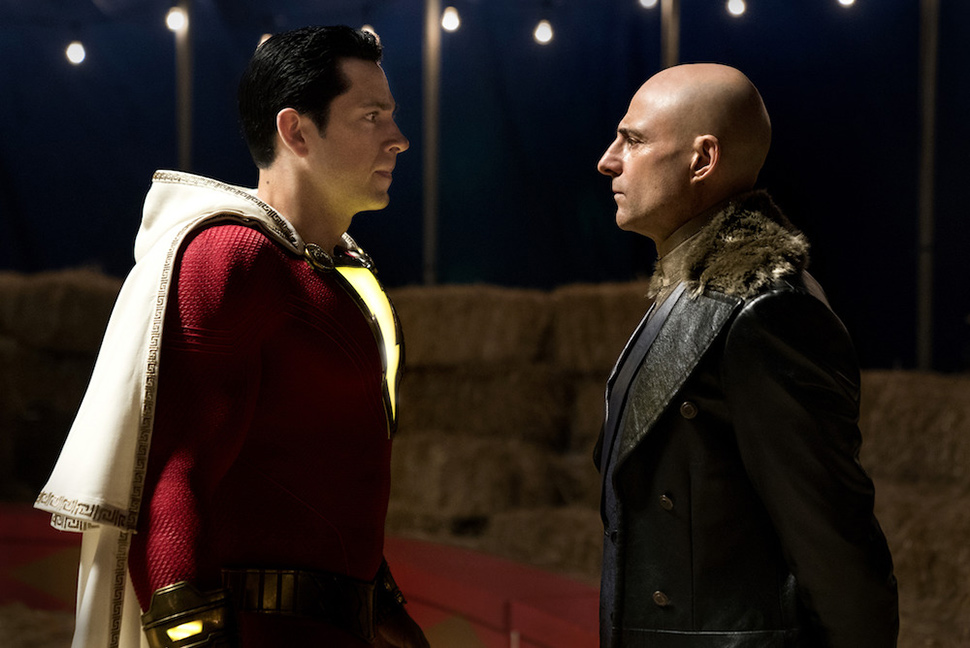 Shazam faces off against the sinister Dr. Thaddeus Sivana (Mark Strong), who champions everything that the wizard was guarding against and has the power to match his ambition. It’s a little too much for a 14-year-old boy who never asked for the enormous responsibility of protecting the world from unspeakable evil.

What happens is pretty much standard fare for an origin story. We’ve seen it with everyone from Spider-Man to Iron Man to Doctor Strange: irresponsible person forced to change for the better and embrace his inner hero.

But even if the beats are the same, Shazam!’s emotional resonance is markedly different. From start to finish, Shazam! is all about family. It’s about the relationship between parent and child, a love letter to foster parents everywhere and a resounding indictment of adults who treat their children badly.

Parenting is a Superpower

No other superhero film tackles the idea of family with as much love and care as Shazam!. Director David Sandberg (Anabelle: Creation, Lights Out) even makes a point to preface the movie with a glimpse into Sivana’s childhood and the ostensible reason behind his villainy.

It’s an admonition and a warning: with great power comes great responsibility, and by that same token, parents wield great power over shaping the hearts and minds of their children and therefore have the greatest responsibility of all. A clever shot in the film encapsulates this thesis, as Billy’s newest foster parents Rosa and Victor Vasquez (Marta Milans and Cooper Andrews) drive off to chase him after he runs away yet again: A sticker on their family van says, “I’m a foster parent. What’s your superpower?”

This is the film’s subversive and most important message. Parents are the world’s greatest superheroes. The adults who raise children have the power to shape the future by setting the next generation on the right path. This is also the wizard Shazam’s greatest failing, an inability to see true potential, the ability to change for the better. 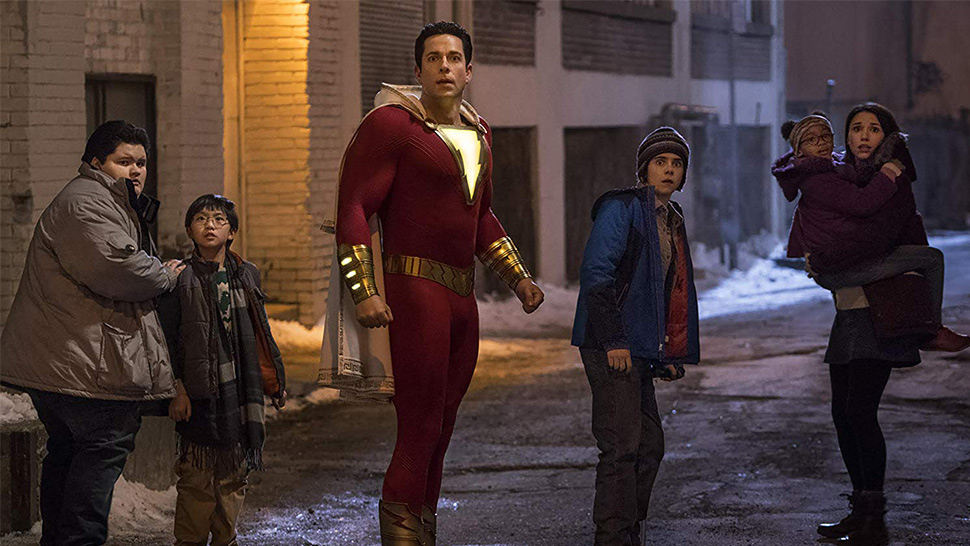 The Vasquezes are the world’s coolest and kindest parents, raising a happy madhouse with six diverse and representational foster children. There’s the adorable African-American Darla (Faithe Herman), the nerdy Asian gamer Eugene (Ian Chen), the lumbering giant Latino Pedro (Jovan Armand), and the all-American girl next door Mary (Grace Fulton) in addition to Freddy and Billy. This family unit are the real heroes of Shazam! in all the most joyous ways.

Rosa and Victor are former foster children themselves, granting them empathy for Billy that demonstrates how love and patience are some of the most heroic qualities a person can have. Shazam! also brings home the point that family is defined more by whom we choose to love, nurture, and protect, rather than by consanguinity.

Shazam! is a Marvelous, Magical Ride

No other superhero film has been made with the kind of wonder and innocence that Shazam! exudes, with a fairly simple plot and story arc that caters specifically to children. This film is for all the children who are still figuring out their place in the world. Shazam! gently reminds them that they, too, can be heroes.

Sandberg, a veteran of horror, is surprisingly adept at crafting a story that delights the whole family. Children will see themselves in the shoes of Billy and dream of becoming Shazam, while adults will feel like kids again. It’s the kind of film that brings a family closer together, as it celebrates the family like no other superhero movie before it.

After decades of superhero films aimed at adults, with even the lighter-toned Marvel Cinematic Universe taking a turn for the somber and melancholy with Avengers: Infinity War and Endgame, Shazam! is unapologetically aimed at the young and young at heart. It's as far as it gets from the Snyderverse, filled with as much exuberance and color as Snyder’s films lacked them. If Snyder was hell bent on weighing down the most powerful being on the planet with so much angst, Sandberg gives Shazam, the world’s mightiest mortal, some necessary growing pains but ultimately frees him to be a truly happy superhero who knows what’s truly important in life. 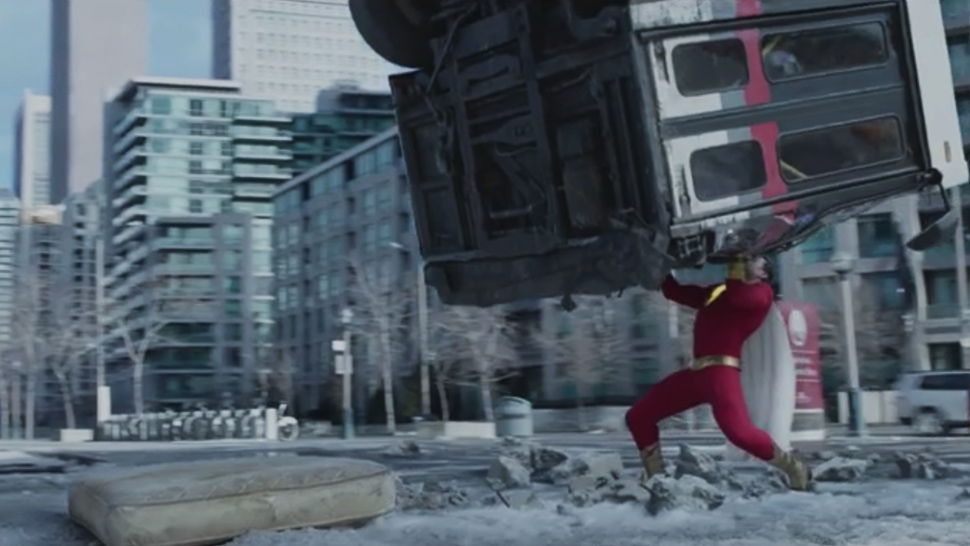 Bookended by scenes at a carnival, the first one of trauma and the latter of triumph, the storytelling wonderfully delivers the point about family and the lengths we go to save the ones we love. This isn’t to say that Shazam! isn’t without some flaws. It suffers from being almost too predictable, following a familiar yet triumphant arc from start to finish. Some of the funniest jokes have already been revealed in the trailers, although there’s still a whole lot of laughs to be had.

Shazam! is a truly marvelous, magical ride with more heart and earnestness than most superhero films that’s best enjoyed with the whole family. Make sure to watch out for two post-credit scenes.

Shazam! is out in theaters on April 3.

Marvel Fans Found the Perfect Way For Captain America to Die in Avengers: Endgame
All Photos
Comments
View As List