The last entry of this phase of the Marvel Cinematic Universe confirms the multiverse theory.

ith [redacted]'s death and [redacted]'s retirement from the super hero business in Avengers: Endgame, most Marvel fans think that Endgame is the last film for Phase three of the Marvel Cinematic Universe. But according to studio mastermind Kevin Feige, the upcoming Spider-Man: Far From Home is actually the conclusion to the 10 film arc that started back in 2016 with Captain America: Civil War. And today, with the release of the new spoiler-filled Spider-Man trailer, we're finally seeing what he means.

The new Spider-Man: Far From Home trailer picks up right where Endgame leaves off. It sees a mourning Peter Parker seeking consolation from Happy Hogan on the loss of his friend and Uncle Ben-esque mentor figure, Tony Stark, aka Iron Man. But it turns out Peter's not the only one who's mourning Iron Man. The consequences—and losses—from Endgame have affected the entire world (and universe, for that matter), and while our heroes mourn the loss of their fallen comrades, people everywhere are adjusting to their new reality, post-Snap and re-Snap.

Death isn't the only thing the world is reckoning with, though. Something much larger and much more profound for the MCU is introduced in this trailer, confirming a theory that has been floating around the forums for years now—the Multiverse is real. Apparently the Snaps not only altered the amount of living creatures who exist in our timeline, but it also sucked some folks into dimensions outside their own. Namely, Jake Gyllenhaal.

Here are all the details you might've missed in the new trailer:

Looks like Peter's pretty comfy in his shiny new Stark duds after all. Marvel obsessives will recall the moment in the first Spider-Man film when Tom Holland's Peter Parker refused to don the advanced tech in favor of remaining a "friendly, neighborhood Spider-Man" with the lower-tech, more classic-looking costume that Tony gave him in Civil War. Well, here we see out friendly wall-crawler kicking ass in the Iron Spider suit. Could Peter be honoring his late mentor by fighting crime in the suit Stark gifted him? Or is there something special about the Iron Spider suit in a post-Snap world?

We never got to see Tom Holland's Peter Parker lose his Uncle Ben and become Spider-Man. It's an event that's been hinted at throughout the many appearances of Spidey in the MCU, but, since it's been shown so many times before in all the other iterations of the character in film, Feige and the Marvel big bosses chose not to show it to us this time. While the MCU Spider-Man has been very convincing so far, without seeing Parker lose his father figure (and claim responsibility for his death), it's hard to fully grasp the motivations of this version of the character. Well now it looks like we're finally getting that moment, but instead of Spidey and Aunt May discussing the loss of Uncle Ben, it's Parker and Happy Hogan talking about Tony Stark. May we even get the "with great power comes great responsibility" line?

This one fucking rules. Looking closely, we can see the name "Crusher Hogan" displayed beneath Happy Hogan on a posterboard while Peter and Happy are avoiding answering Nick Fury's phone call. Who is Crusher Hogan? Well, digging back into the archives of the Marvel comicsverse, Crusher actually appears to be the wrestler that Peter Parker fought–and won against–when he was first becoming Spider-Man. You remember Randy Savage's amazing character in the first Tobey Maguire Spider-Man film? Well they renamed him Bonesaw for that Sam Raimi adaptation. Which means, essentially, Bonesaw is a back, baby. Might we see Spidey do some wrestling in this film?

They're really going for it. Peter Parker has been in many relationships over his many decades as a Marvel comics entity, but no girlfriend (or wife) has been as important to his character as Mary Jane Watson. At the end of the MCU's first Spider-Manmovie, Zendaya's character was referred to as MJ, and the sparks between her and Peter Parker were easy to see. Now it looks like the MCU is going all-in on the Parker/MJ romance, as Tom Holland says in this trailer "I think MJ really likes me." 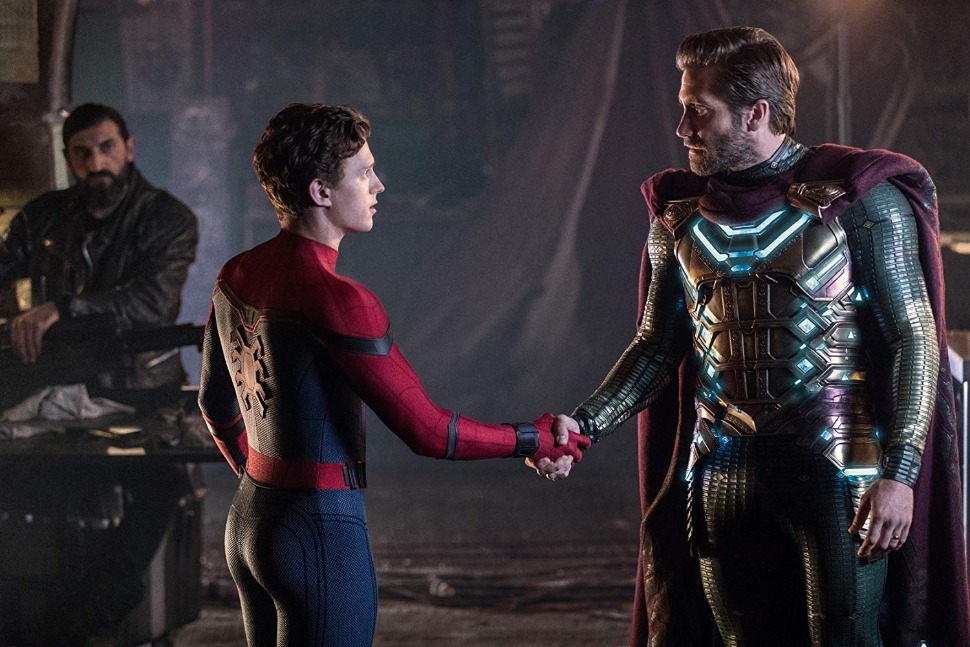 Mysterio is not to be trusted

Jake Gyllenhaal is showing off his full Mysterio suit in this new trailer. It's got the classic colors, and even the fishbowl head that fans have known and loved for years. He tells Parker that he was sucked into our reality after the Snap, thus establishing the existence of the Multiverse in the MCU. But can he be trusted? The classic Spider-Man villain is known for many things over the years, but definitely not for telling the truth. Mysterio is traditionally a master of illusion and disguise. Gyllenhaal has a ton of charisma in this trailer. He seems like a sympathetic character. But later he says "Saving the world requires sacrifice. Sometimes people die." Who is he referring to? Would a good guy ever really allow anyone to die? We're not buying it.

Our beloved Web-Head has had a ton of costumes over the years. And while many of them have been black in color, one recent one bears a striking resemblance to the new black suit that's featured in this trailer: Spider-Man Noir. Perhaps most famously depicted by the Nic Cage-voiced Spider-Man in the recent Spider-Man: Into the Spider-Verse animated movie, the Noir Spidey comes from a timeline where the Wall Crawler fights crime back in the mean streets of the 1930s. Why is Holland's Peter Parker donning a Noir-looking suit here? He's on a European adventure–could it be an homage to the German Expressionist films and French Post-War movies and Italian Neorealist era that inspired the American Film Noir movement? Definitely, definitely not. Would be kind of cool, though, right?