An excellent gallery of rogues populates the entertaining crime comedy. 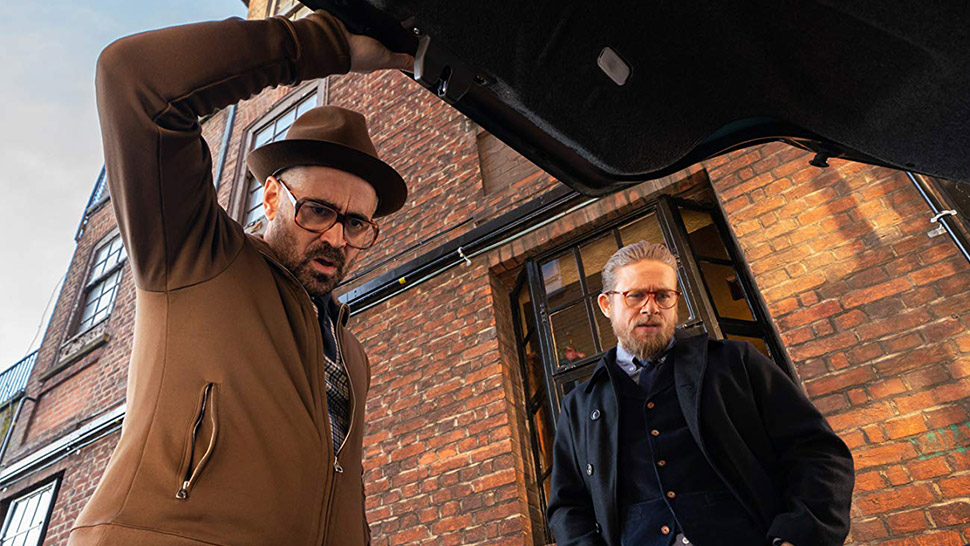 After a couple of stumbles in King Arthur: Legend of the Sword and the live-action Aladdin, director Guy Ritchie returns to the genre he’s helped define for the modern age: the crime comedy. With The Gentlemen, we see Ritchie at his A-game, crafting a deliciously convoluted plot involving drugs, murder, and royal estates.

The film follows the story of retiring marijuana baron Mickey Pearson (Matthew McConaughey), as narrated by skeevy private investigator Fletcher (Hugh Grant having the time of his life). Fletcher has uncovered every detail of Pearson’s operation, and has approached his right-hand man Raymond (Charlie Hunnam) with the intent to blackmail and, perhaps, secure a film deal along the way.

Being a Guy Ritchie crime comedy, however, this premise quickly devolves into a messy tangle of errors, with cartoonish characters finding their way into the story from all angles. When word breaks out that Pearson is getting out of the game, American billionaire Matthew Berger (Jeremy Strong) expresses interest in buying out his business. Also interested is Dry Eye (Henry Golding), a second-tier gangster hoping to establish his name. Negotiations get muddled when a gang of hooligans storm one of Pearson’s labs and upload the raid in an online rap video. This forces their boxing coach—known only as “The Coach” (Colin Farrell)—to contact Raymond about making amends with Pearson.

McConaughey chews the scenery every time he’s onscreen, playing the anti-hero role as though it were second nature to him. Hunnam is surprisingly effective as the henchman Raymond, occasionally breaking his seasoned veneer with moments of disorientation when things go wrong. Strong’s Berger is the perfect foil to Pearson’s playboy persona, a nebbish fox thought harmless enough to let into the henhouse.

In fact, it’s Grant’s performance that sets the tone for the whole movie, as The Gentlemen is driven purely by the quality of its characters. By establishing a larger-than-life, love-hate persona as the audience surrogate, viewers are primed to enjoy the rest of the film’s gallery of rogues.

And what a gallery it is. Not a single character is wasted within the movie’s mile-a-minute pace, which is a feat considering how many there are. Ritchie manages to give his enormous cast fully formed arcs in less than two hours, making the film feel completely resolved despite its army of moving parts. It’s a testament to the director’s skill that a story this complicated can be boisterous, convoluted, and yet economical at the same time.

That said, The Gentlemen is difficult to evaluate outside a vacuum. Within one, it’s clearly an entertaining romp—it possesses all the wit and energy of Ritchie’s previous crime comedies, but also shows a level of restraint his previous works might have benefited from. There’s a much more apparent focus on fleshing out his characters through smaller moments of nuance rather than ostentatious moments. Ritchie’s eye remains dynamic, but his camera work now allows us to absorb the scenery better than his prior films did. It’s Snatch, evolved—and this is precisely what makes The Gentlemen such a curiosity in today’s context.

Much of what drives Ritchie’s crime comedies is the way they unabashedly embrace machismo, manifested in misogynistic insults (The Gentlemen may have set a record for the use of the word “cunt”), casual racism, and a sprinkling of homophobia. On paper, having Fletcher switch his Ls with Rs whenever he brings up the Chinese Dry Eye should earn Ritchie some Cancel Points in today’s hyper-aware society, where such racist use of language is rightfully called out. Typecasting all of his black actors as goons who moonlight as Internet rappers—especially contrasted against the film’s powerful white crime bosses—should be cause for concern. That the film’s only female lead is made to suffer sexual assault in service of Pearson’s character arc is deplorable by post-#MeToo standards.

And yet, given the massively absurdist tone of the movie, one could easily parse all these offenses as satire. Ritchie makes it a point to show audiences that there isn’t a single character in this film we should emulate, outside of Coach. There’s even a moment of self-awareness in which two characters discuss whether or not a playful jab between them should be considered racist. Because a great deal of the humor is generated from the utter ridiculousness of men playing out unfettered power fantasies, one could argue that The Gentlemen is, in fact, a clever indictment of toxic masculinity.

The problem is that if this is, in fact, Ritchie’s intent, the director doesn’t make it clear enough. As much as audiences are laughing at the sheer excess of testosterone, racism, misogyny, and homophobia onscreen, there’s a distinct lack of counterpoints confirming that what we are watching is indeed satire. For every viewer who sees it as a hilarious example of behaviors we shouldn’t be espousing, there will be another who takes the film as a glorification of its characters’ flaws. To a degree, public response to the film should be an interesting barometer of how far masculinity has evolved along with modern society.

In any case, whether as satire or as dated power fantasy, there’s no denying that The Gentlemen is absolute fun from start to finish. It’s stylish yet gritty, clever yet low-brow, and modern with old-school flourishes. It’s a picture of a middle-aged Guy Ritchie juxtaposed with the brash 30-year-old who gave us Lock, Stock, and Two Smoking Barrels—and if you’re a fan of either, you’ll enjoy this film. The Gentlemen is highly recommended for people who appreciate Ritchie’s rather unique voice, and for those looking to spend a fun night out with the boys.

This reviewer’s recommendation, however, comes with one request: Try to see it as satire.

The Gentlemen is now showing in cinemas.