Do You Still Remember the Old Cubao? 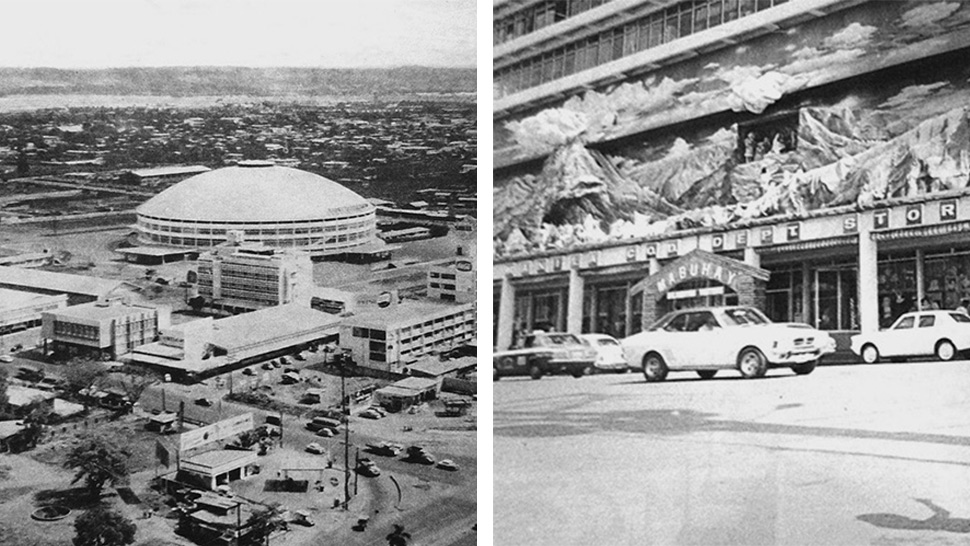 Way before Maginhawa or Teachers Village became your go-to hangout, Quezon City already had C.O.D. and Cubao, alongside other memorable landmarks. Have you ever stopped to think what was in this busy city before it had MRT stations and commercial buildings? Straddling the northeastern side of Manila, the original 25,000-hectare suburbia that is Quezon City was declared as the republic’s capital by President Elpidio Quirino on July 17, 1948, with his signing of Republic Act No. 333. The city was inaugurated as the “National Capital of the Philippines” on October 22, 1949, and remained so until 1976. 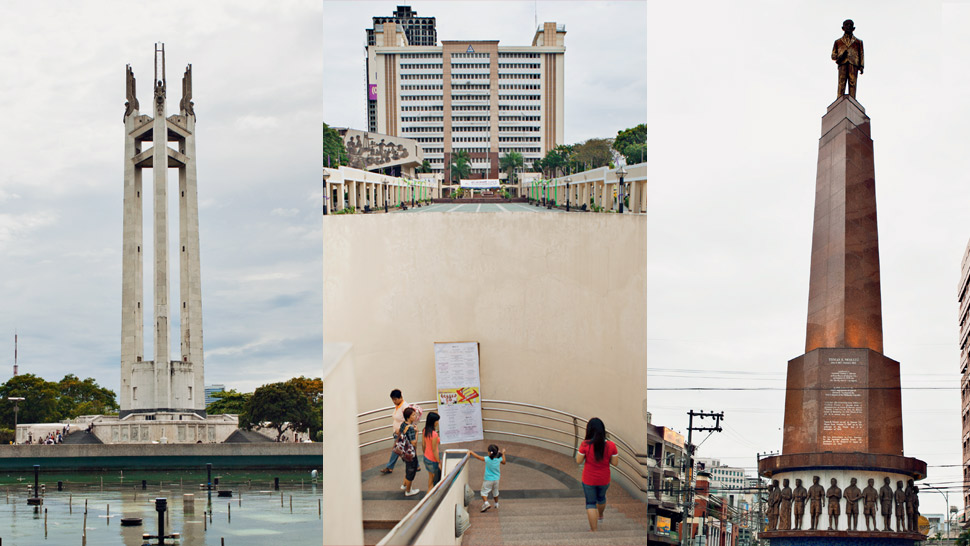 Here are a few snapshots from the past that will give you a glimpse of the old Quezon City.

(Note: The dates in parentheses show the approximate years the pictures were taken) 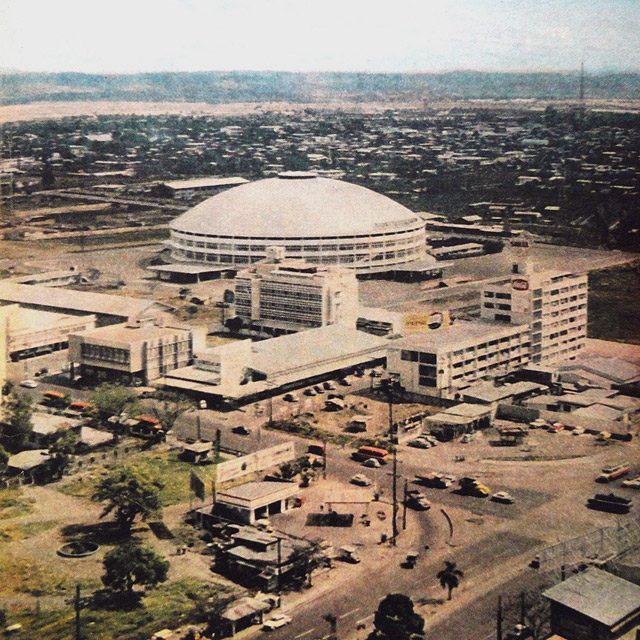 Quezon City’s premier commercial district had its beginnings in 1952 when J. Amado Araneta bought the 35-hectare property from Radio Communication of America and transformed a chunk of it into the bustling commercial hub, Araneta Center. The one-stop center gave rise to landmark establishments like the New Frontier Cinema, Ali Mall, Marikina Shoe Expo, the Araneta Post Office, Fiesta Carnival, and SM Cubao, among others. 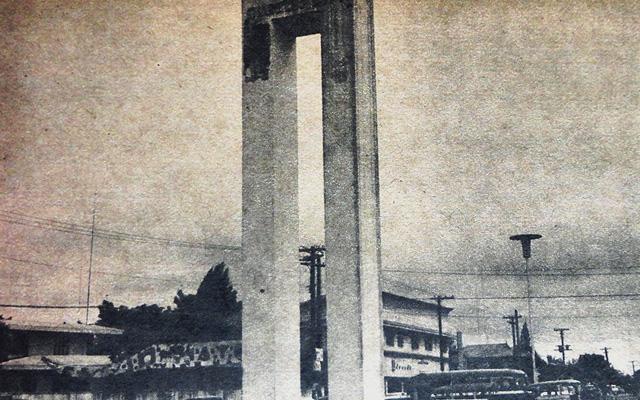 In the year that Quezon City became the official capital of the Philippines, a majestic tower was constructed in the middle of a roundabout to welcome city visitors. The Welcome Rotonda, situated at the intersection of E. Rodriguez Sr. Boulevard, Mayon Avenue, Quezon Avenue, and España Boulevard, was designed by Luciano V. Aquino and executed in fine marble. The Welcome Rotonda was an important transportation hub, serving as a terminal for passenger jeepneys in post-war Manila. It is also a staging place for political and protest rallies. One such notorious protester was Amando Ducat Jr., who climbed the top of the tower and went on a hunger strike to object to the candidacies of Chinese-Filipinos in the 1995 elections. The Welcome Rotonda was renamed as “Mabuhay Rotonda” in 1995 by Quezon City Mayor Ismael Mathay. 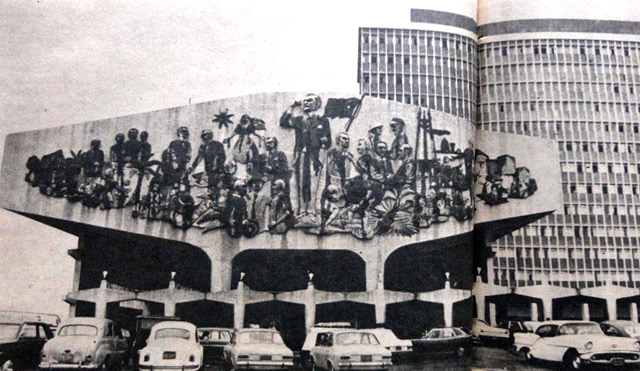 The first city hall stood on Aurora Boulevard, corner EDSA. The current 14-storey city hall, designed by Architect Ruperto Gaite, is located along Elliptical Road, Diliman, and was constructed for a period of eight years—from 1964 to 1972—and completed during the term of Mayor Norberto Amoranto. Its signature feature is the façade with bas-relief images, 40 meters long and 10 meters high. The bas-reliefs were created by Eugenio Bunuan and show images from the life of the late President Manuel Quezon. The central nine-meter figure features the leader standing tall with his trademark clench-fisted stance, surrounded by other images like his ancestral nipa house, the Quezon Memorial, and many scenes from the Commonwealth Era. 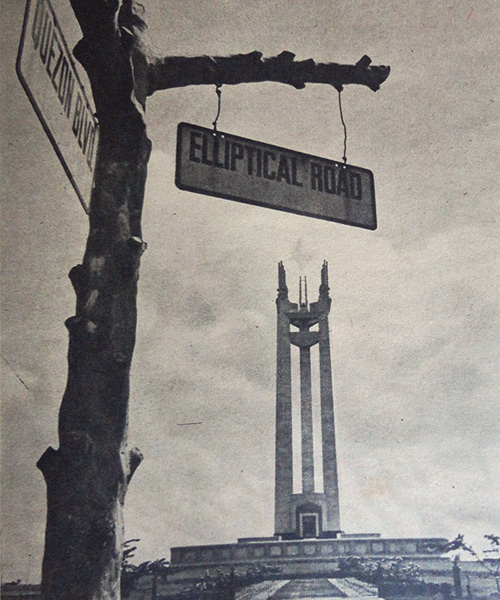 The Elliptical Road is a two-kilometer road that circumscribes the whole of the Quezon City Memorial Circle, so named because of its elliptical shape. The eight-lane road serves as the end point or terminus of seven major city thoroughfares, namely: Commonwealth Avenue, Quezon Avenue, North Avenue, East Avenue, Visayas Avenue, Maharlika Street, and Kalayaan Avenue. Along the perimeter of the Elliptical Road are many government buildings like the Quezon City Hall, Quezon City Hall of Justice, Philippine Coconut Authority, Department of Agrarian Reform, Department of Agriculture, PTV 4, as well as the Ninoy Aquino Parks and Wildlife Center. 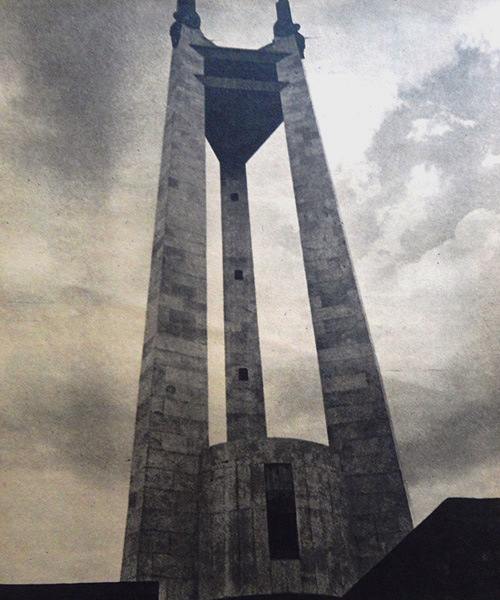 The Quezon Memorial is a magnificent tribute to President Quezon, and rises 66 meters (to represent the 66 years of Quezon’s life), from the base to the tip of the pylon. The signature Quezon City landmark, which features classical and symbolic motifs, was the winning design of Architect Federico Ilustre and is made from Italian Carrara marble. However, it stood unfinished in the elliptical field for many years as the committee tasked to do the memorial went over the original budget of P250,000. Thirty more years would pass before the Quezon Memorial was completed. In 1979, on the 101st birthday of President Quezon, his remains were transferred from the North Cemetery to the Memorial, a fitting resting place for a leader who gave his name to the capital city. 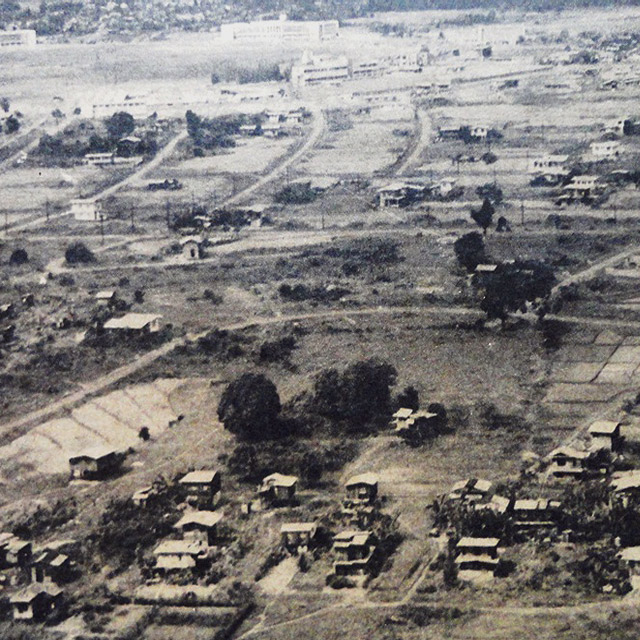 Diliman, an important district located at the southern part of Quezon City, was named after an edible medicinal fern (Stenochlaena ), which was said to grow in abundance in the area. One of its distinguishing landmarks is the Quezon Memorial, which rises in the middle of the Quezon Memorial Circle. It is also a major educational district, home to many important learning institutions like the University of the Philippines Diliman, Philippine Science High School, Quezon City Science High School, School of the Holy Spirit (formerly Holy Ghost College), and Polytechnic University of the Philippines (formerly Philippine College of Commerce), among others.

ADVERTISEMENT - CONTINUE READING BELOW
East of the Diliman area is Katipunan Avenue where Ateneo and Miriam are located, while just behind UP Diliman are Timog and Tomas Morato Avenue, known for their popular entertainment and dining strips. Two national TV networks—ABS-CBN and GMA 7—hold offices in Diliman; important government offices—like the City Hall and head offices of national government agencies are also in Diliman; hospitals and health institutions—like the Philippine Heart Center, the East Avenue Medical Center, and the Philippine Mental Health Association—dot the area. The rest of the area is mostly residential, with neighborhoods like Teachers Village, UP Village, and Sikatuna Village. 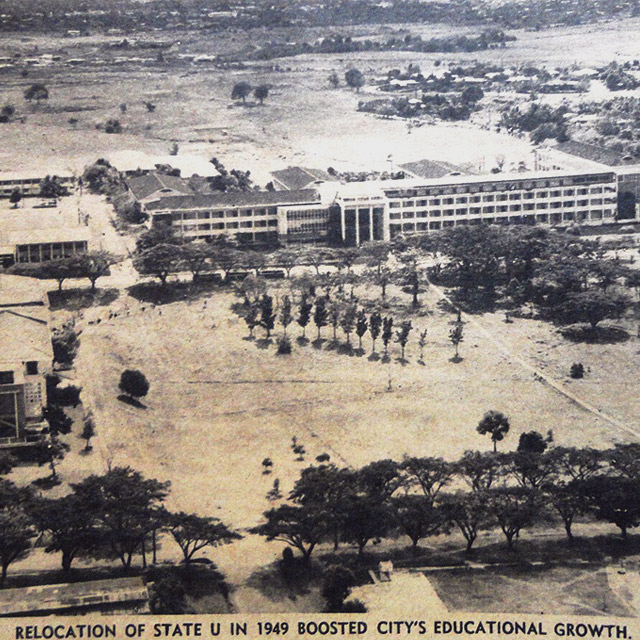 Relocation of the University of the Philippines to Diliman (1949)

Founded on June 18, 1908, the University of the Philippines (UP) was originally situated in the city of Manila with the aim of giving  “advanced instruction in literature, philosophy, the sciences and arts, and to give professional and technical training” to every qualified student regardless of “age, sex, nationality, religious belief, and political affiliation.” The war inflicted major damage on its buildings in Manila. In 1948, during the term of UP President Bienvenido Gonzales, much of the state university was moved to a sprawling new campus in Diliman, Quezon City. 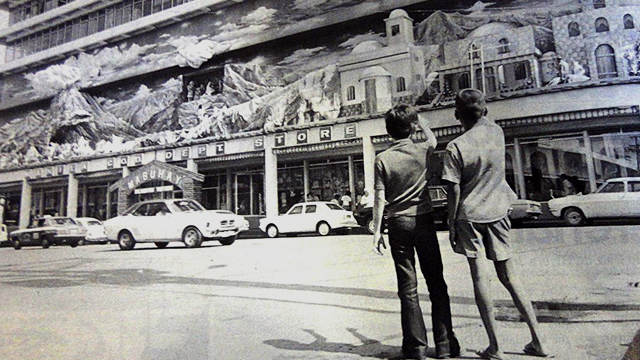 The University of the Philippines Chapel (or the Parish of the Holy Sacrifice) in Diliman set new trends in church construction when it opened in December 1955. Its distinctive features include its circular base, Way of the Cross murals (done by the future national artist, Vicente Manansala), center altar, and the huge image of Christ. The construction of the domed church, supervised by UP spiritual head Fr. John P. Delaney, was funded through contributions from the UP faculty and  and finished through the collective efforts of UP graduates like Engr. Alfredo Juinio, Engr. David Consunji, and National Artist Leandro Locsin. Future national artists like sculptor Napoleon Abueva, Ang Kiukok, and Arturo Luz also worked on the interiors. The church has been declared a National  Landmark and a Cultural Treasure by the National Historical Commission of the Philippines and the National Museum of the Philippines, respectively.

In answer to the invitation of Most Rev. Michael J. O’Doherty, the Maryknoll Sisters (a.k.a. Foreign Mission Sisters of St. Dominic) opened a Teachers Training College and a Practice School in the Philippines. The original school, located in an old Augustinian convent in Malabon, was known as Malabon Normal School, and later, Maryknoll Normal College. It got burned down in 1945, but its high school department was reopened in July 1945 along Dewey Boulevard. It would take three years for Maryknoll to resume offering its normal and collegiate courses. In 1953, it moved yet again to its permanent location in Loyola Heights where it was called Maryknoll College. In 1977, the operation of the school was turned over to Filipino lay administrators, and  in 1989, Maryknoll was renamed Miriam College. The school briefly accepted male college enrollees, but stopped the practice in 1999, thus reverting the school into an  college.

The problem of congestion in Manila was already being felt as early as the 1950s. As a solution to this problem, compounded by the devastation wrought by the war, the government initiated a housing program with the objective of diverting part of Manila’s population (which swelled to two million in 1958), to new satellite communities. Most of these communities were located in the environs of Quezon City, as proximity to Manila was a major consideration. The result was the birth of a construction boom known as “project housing,” led by the Philippine Homesite and Housing Corporation during the term of Mayor Nicanor Roxas. On 40 hectares of land, more than a thousand project houses were built, which gave the communities their names like Project 3, 4, 5, 6, et cetera.

Manila C.O.D. was one of Manila’s leading department stores that began as a small shop along Rizal Avenue in busy Sta. Cruz in 1948. The shop was managed by Alex Rosario who, because he had insufficient funds to promote Manila C.O.D. via print advertising, thought of a crowd-drawing gimmick. In 1957, at the onset of the holidays, Rosario created an outdoor animatronic display, complete with fabulous scenes, light, and music that drove customers to his little store. In due time, Manila C.O.D. became one of the city’s most popular shopping destinations.

For a brief, shining moment in the late '60s to the '80s, Cubao rivaled Avenida Rizal as a theater strip with its array of movie houses like Nation Cinerama, Coronet, Remar, Maya, Ali, Diamond Theater, and Cubao Cinema. But its crown jewel was the New Frontier Cinema Theater, which, when opened in 1965, was heralded as the biggest cinema in the world with a seating capacity of 3,500 people. New Frontier Cinema became Araneta Center’s premiere center, in a time when movie fans could watch featured films over and over again.

The rise of home entertainment in the '80s via VHS or Betamax video rentals affected the operations of many cinema houses, resulting in their closure. New Frontier suffered the same fate and was abandoned. After years of languishing in ruins, the old cinema was resurrected after the Aranetas entered into an agreement with the company that distributes Kia Motors to restore it back to its full glory under a new name—Kia Theater, a new 2,385-seat performing arts venue launched in 2015.

About The Author
Alex Castro for Spot.ph
View Other Articles From Alex
Get The Latest Updates From Esquire!
Subscribe to our newsletter!
Latest Feed
Load More Articles
Esquire Money