Your cash is useless at Amazon Go. 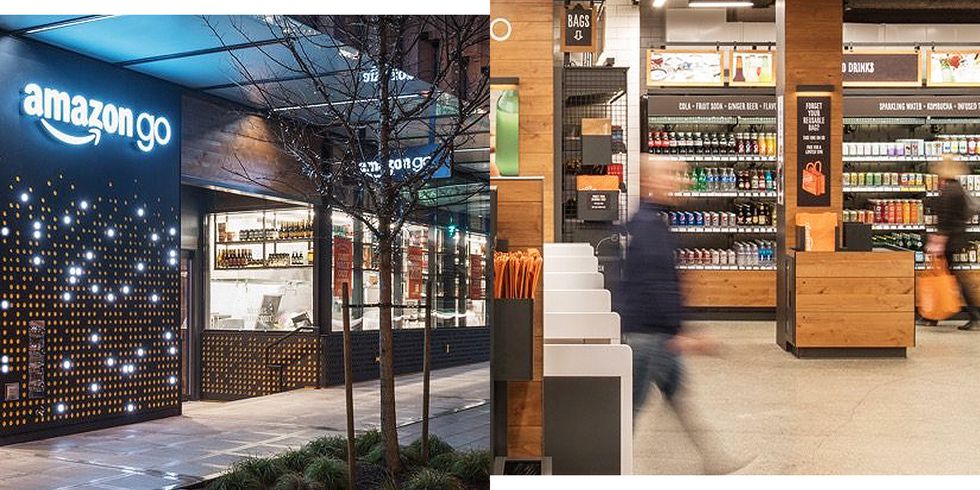 Amazon is trying to take over and streamline another aspect of day-to-day life: the convenience store. Today in Seattle, the first Amazon Go shop opened to the public. Its shelves are filled with prepared salads and sandwiches, canned goods, wine, and Amazon Meal Kits—granted, it's a little prettier than your average 7/11—and you only need an app to access it. Literally—no actual money changes hands at Amazon Go.

You see, in designing the store, Amazon decided that cashiers and lines are not part of our shopping future. You need to have the app to enter, and then a system of cameras, sensors, and AI tracks customers as they make their selections and head back out the door without waiting to check out. Then, they're automatically charged through the app. Actual people work behind the cameras too, to keep an eye out where AI can't. And apparently, even though there's basically zero human interaction, it's really hard to shoplift.

Amazon Go, which has been open to Amazon's Seattle employees since 2016, is just latest example of the tech giant deciding that brick-and-mortar was cool again, shaking up the retail industry whose tech is way behind. After taking over the book business, the company is building actual book stores, and its jump into grocery stores with Whole Foods is well underway. However, Amazon Go closes at 9pm, which might be its downfall—no beef jerky and BBQ Lays runs for those of us who only use convenience stores to satisfy our most basic late-night cravings.