Well, we at least helped. 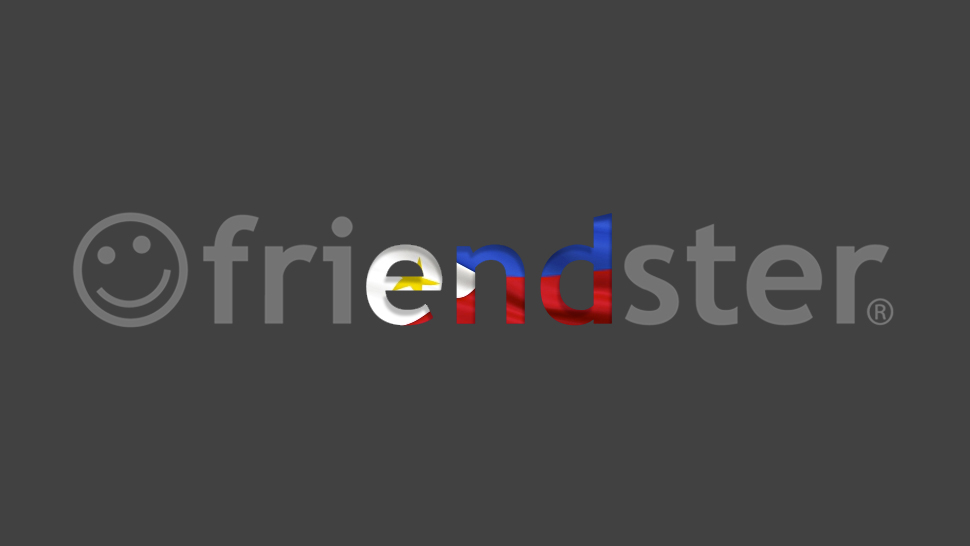 The year was 2004. Back then it wasn’t F4F, but T4T. Testimonial for testimonial. You’d write a long prose of praise for a friend with an unwritten deal that he/she would write something nice (and hopefully equally long) back. “Testi naman” was the catchphrase of the year. You faked your age, whipped up an impressive enough profile, searched for friends then typed in people you’ve only heard of to check how much of their page you could view. This was 2004, when our whole online world revolved on a little social networking site called Friendster.

Little did Filipinos know, while they were busy checking the thesaurus for better ways to say “This person is the most amazing friend you could ever meet,” Friendster was grasping to stay relevant.

When Friendster was launched in 2002, it caused an Internet revolution. Wired.com even described it as “once the hottest thing in social networking [that] Google wanted to buy it for $30 million back in 2013.” That same year, Friendster’s peak, millions were logged on and the same investors who backed Amazon, Ebay, and Yahoo were on board. In a tell-all on Mashable, Friendster founder Jonathan Abrams described the site as “the David, not the Goliath. He said, “there were the Yahoos and the AOLs and we were this tiny, little startup.

That proved to be just the case when success ran away from them. The site had gotten big so fast that no one was able to keep up. The little idea that Abrams had for dating and connecting needed more than just concepts for making the world a little bit closer. It needed servers to improve speed, it needed human resources and technology to keep things running, it needed investors, and it needed investors to be happy. By 2003, he had $400,000 to do all that.

Friendster quickly became plagued with problems: Rappler enumerates a number of glitches, including its failure to buy out competitors, its generosity in selling patents to Facebook, and its overall poor concern for tech issues affecting user productivity.

Despite clocking in two million users and generating 10 million views a day in four months, people started complaining about load times. According to an article published on Inc.com called "How to Kill a Great Idea," Friendster’s people were too preoccupied in dealing with day-by-day issues to focus on building features for the site—or even taking out some of the more needless, heavy aspects.

With problems mounting and investors offering up different agenda, Friendster was a mess and Abrams was slowly inched off the board. Improvements in the software came a little too late and the high-powered board members were preoccupied with their own opinions. As writer Brendan Koerner put it, "[t]hey let ambition blind them to basic engineering problems." No one paid attention to the users whose demands from a social networking site were changing.

Friendster, a pioneer in social media, well ahead of everyone else, stalled.

This revelation confirmed Friendster’s first failure: their strong fanbase in the Philippines was not the customers that they were paying millions to attract.

In the Inc.com story, Chris Lunt, former director of engineering, remembered how traffic would increase at 2 a.m. He traced the activity to the Philippines and tracked down the link: Leilani De Jesus, the 91st person to join, was the first American to connect Filipinos to Friendster. She was only the first of many Asian-Americans that connected the social networking site across continents.

This revelation confirmed Friendster’s first failure: their strong fanbase in the Philippines was not the customers that they were paying millions to attract. With MySpace and Facebook already taking the lead in the U.S., Friendster didn’t really have a choice but to build their base in Southeast Asia.

While MySpace and Facebook clamored for U.S. users, Friendster tried to capitalize on where they were ahead. By 2005, it was already the most-visited site in the Philippines and Indonesia and the second in Malaysia and Singapore. By 2006, Friendster opened headquarters in Manila, then a sales office in Singapore. 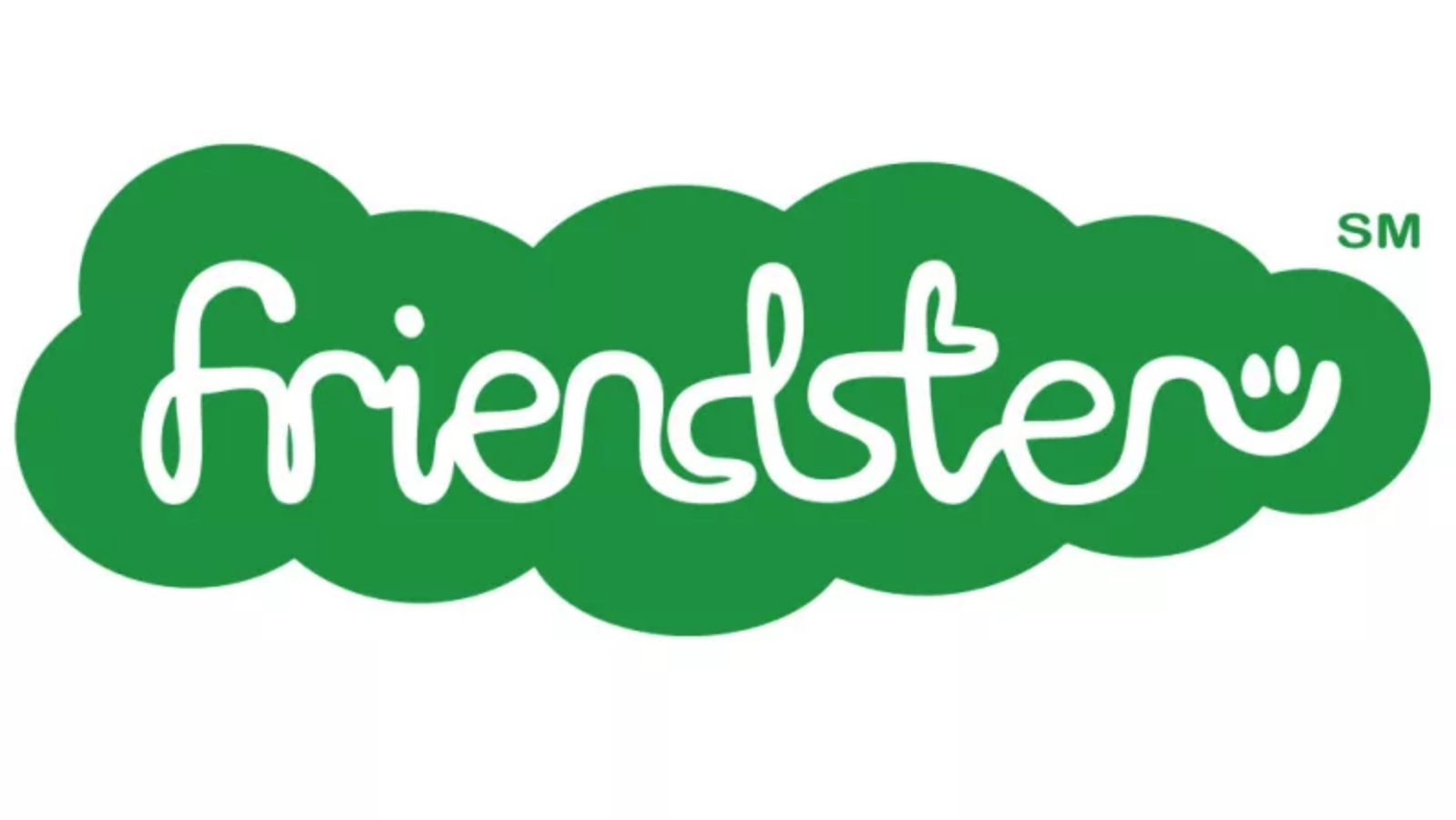 With 12 million active users, the Philippines especially remained loyal to Friendster. Over 7,000 people also showed up for Pinoy Friendster Day at the SM Mall of Asia on August 15, 2009. The event gunned to get the world record for “Biggest Eyeball Ever.”

Later that year, however, Friendster underwent a major overhaul, transforming its blocky blue logo with a curlier green font. According to Tech Crunch, the redesign intended to place its emphasis on three pillars: simple, fun, personal. The interface combined the feel of Facebook with the personalization of MySpace (which, at that time, was already struggling as well).

The change, as well as Facebook’s steady growth in the Philippines, however, caused a massive drop in Friendster’s remaining active users. And while there is no quantitative data to back this up, Friendster, with its ornate t3stiMonial$ and overly customized pages, just became known as the jeje site.

Despite the optimistic redesign, by the end of 2009, Malaysian-based MOL Global purchased the site for $100 million. Two years later, the company announced that all user profiles were to be deleted by May 31, 2011. A month later, it was converted into a gaming site, which was promising at first (Forbes reported that it was the largest online gaming platform in 2012) but eventually fizzled out as well.

If you visit Friendster.com nowadays you’ll see a green message board that announces the changing demands of the online gaming community and the company’s decision “to take a break and pause services effective June 14, 2015.” There have been no other news on Friendster’s future. 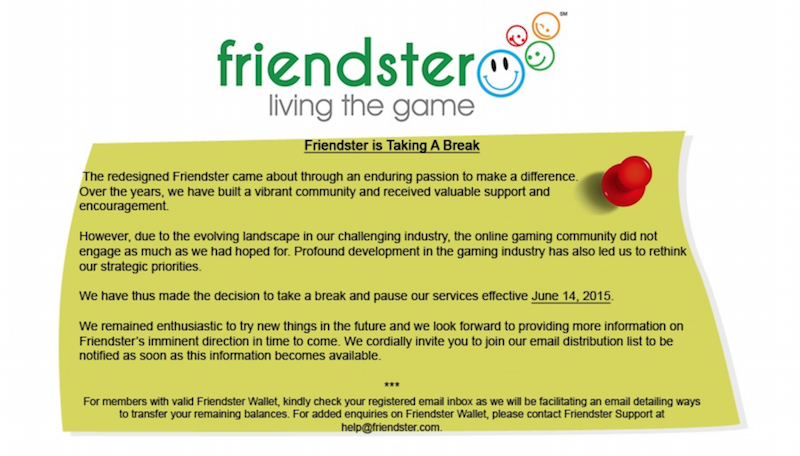 It’s commendable how Friendster tried to hold on to its last breath. There are many factors that contributed to its failure, including mismanagement. We might have given up on Friendster, too, but one thing's for sure: by failing to consider its users, it gave up on us first. 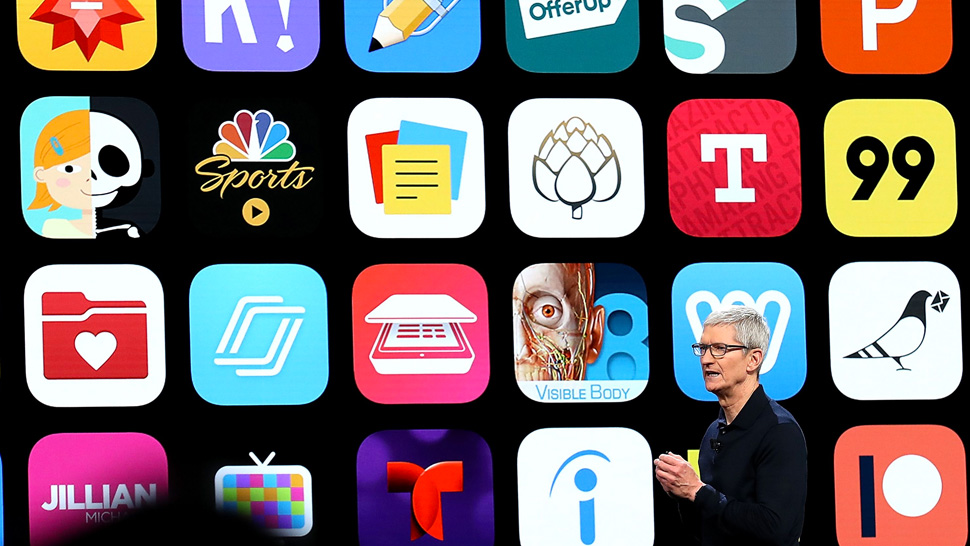