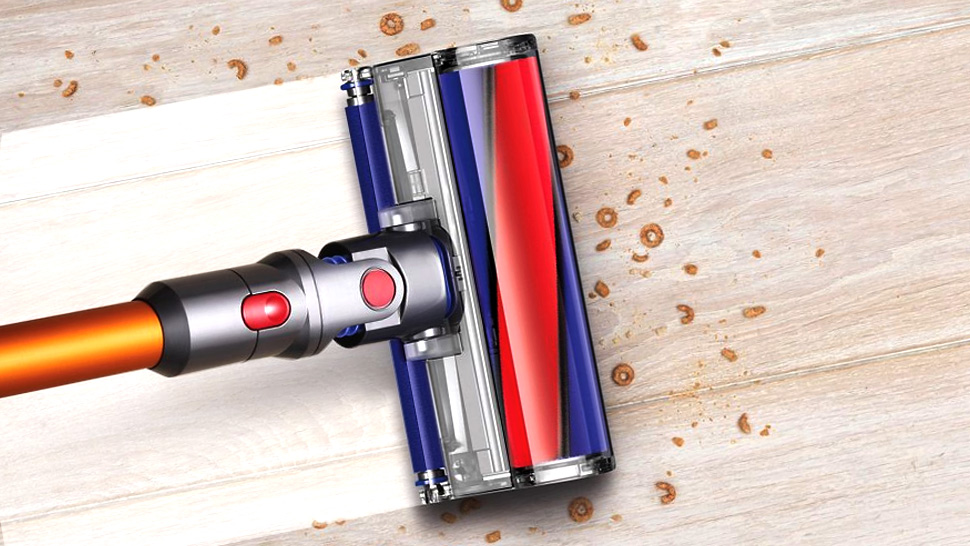 If you'd been heading south on EDSA this past week or so, you would've seen this handsome LED ad that looked like it was trying to tell you about the latest space-age car, or perhaps some new innovation in gasoline technology. EDSA traffic being what it is, however, you would've also seen the big reveal: This was an ad for a vacuum cleaner.

The Dyson V8 Carbon Fiber (or, more accurately, the Dyson V8 Carbon Fibre, in deference to its British heritage) does have a space-agey name that makes it sound like something the Jetsons would use. It looks the part, too: It's cordless and streamlined, and has these blue nacelles that house the company's patented 2-Tier Radial™ cyclones. It's beautiful. It's—and believe me when I say we don't want to say this about a lot of appliances—sexy. "Ah, I don't think we ever set out to make a sexy product. I don't think we'd be very good at that," says Sam Twist, a senior advanced design engineer at Dyson. 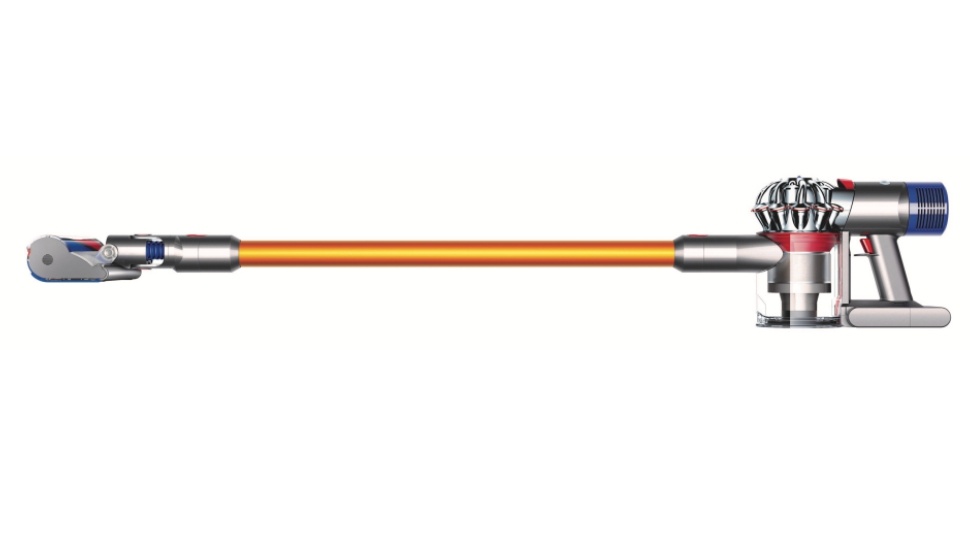 Let's return to that point later and get this out of the way first: The Dyson V8 Carbon Fibre costs quite a bit of coin. Priced at around P47,000, it's a far cry from those cute sub-P2000 machines you bachelors have been using since college. Is it worth it? I asked the only two adults I knew who had one.

It's a game-changer, Rica replied over text message.

Oh. It's a game-changer, Mike said, giving an in-person thumbs-up.

They own slightly older models of the V8, which has been in the market since 2016, (and which was an upgrade from the V6, which came out in 2014; there's also a V7, but it's not a new line in itself, but a bridge model between the two releases).

The first innovation of the V8 Carbon Fiber, which becomes available in the Philippines on February 21, is really just that: the use of carbon fiber material on the cleaner head. That small adjustment means that the vacuum's brush bar does not generate static electricity, which in turn makes dust and other particles stick to carpets and floors. Needless to say, traditional vacuum cleaners don't have carbon fiber—which, if you own a golf club or a bicycle frame made of the material, you know is quite pricey.

At the heart of it is Dyson's V8 engine, spinning at 110,000RPM—five times faster than an F1 racecar, they say. That means that it sucks like nothing else.

The carbon fiber head is the main star of the aforementioned Dyson ad on EDSA, though it needs to say more about it on its website. In the meantime, however, the other big news here is that this new model offers about 30 percent more power than its predecessors, with up to 155,000 air watts (AW) as compared to 115,000AW on the Dyson V8 Absolute and the Dyson V8 Animal. At the heart of it is Dyson's V8 engine, spinning at 110,000RPM—five times faster than an F1 racecar, they say. That means that it sucks like nothing else.

By "nothing else," of course I mean no other cordless vacuum cleaners, though I'd wager that your standard upright vacuum can give the Dyson a run for its money. But then it's really the difference between driving, say, a family van and a muscle car: they both may have 5.0L engines, but the styling and handling alone spell a world of difference. The V8 weighs in at only a little above 2.5kg, or about the weight of a fat cat. This one's more ergonomically designed, however, which means that it's a lot less tiring to heft around the house. 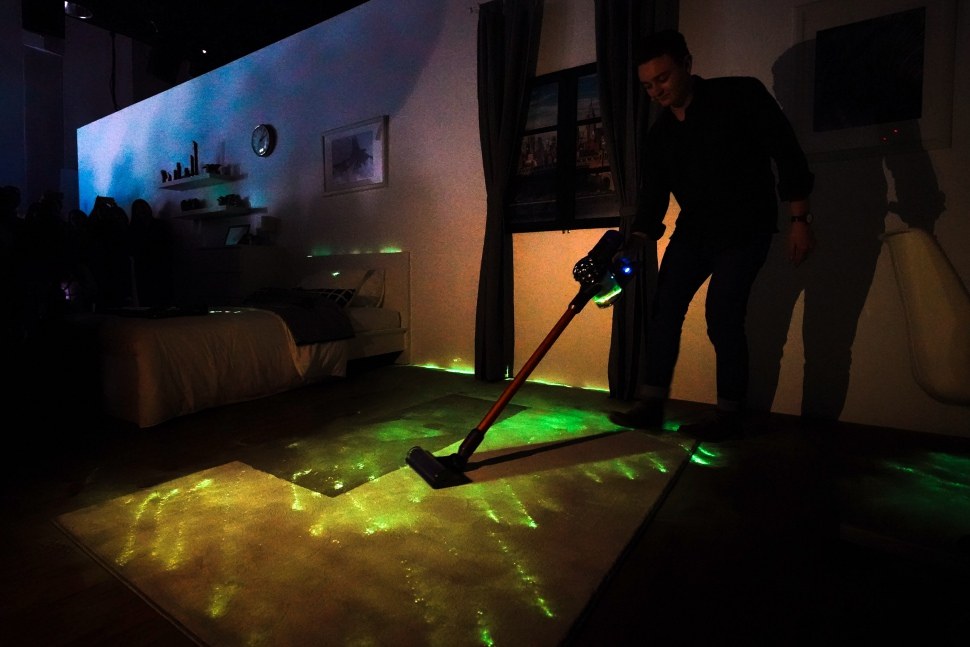 Although one would normally see it in its standard stick configuration, note that you can detach the tube easily, transforming the machine into a handheld, or use its flexible attachment for crevices. The whole thing runs on lithium-ion batteries for about 40 minutes continuously on the "Powerful" mode (otherwise known as "low," because Dyson would have you know that what constitutes "low" for them is equal to "powerful" with everyone else). There's a neat wall-mounted dock where you can recharge the machine while also telling your visitors that it's decor.

There's a couple more cool things about the V8 that deserve more mention: the no-touch release system for the bin that liberates you from having to dirty your hands when emptying out the dust; and the improved noise reduction design.

The engine turns on and off via trigger, and the machine delivers a satisfying little kick every time. It is almost disconcertingly light, with most of the weight placed above your hand, so it does feel like you're a kid playing pretend-raygun around the house.

At the end of the day, however, it's still all that basic suction power that will be the deciding factor, and on that the V8 Carbon Fibre is a winner. Sure, it cleans up the standard dust and dirt fine, but it's really the stuff that you don't see it sucking up that makes it stand head and shoulders above every other vacuum in its category."Look at this," Sam Twist beckons. "If you put your face in the exhaust, you'll find that the air coming out is actually cleaner than the air coming in." That, he explains, is because the whole-machine filtration system captures particles that are about 100 times smaller than the width of a human hair. 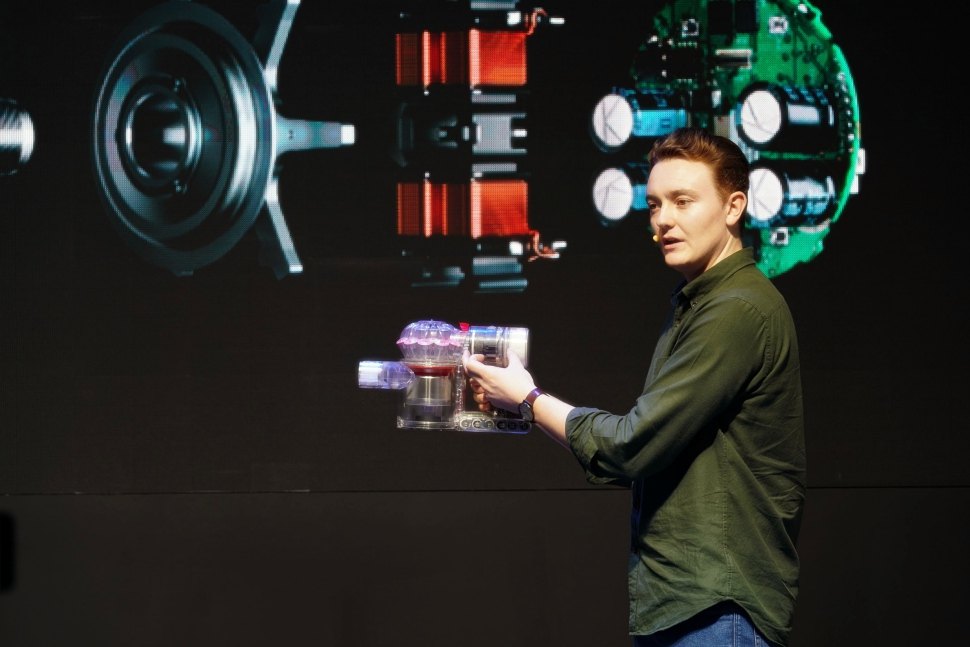 "As for our products being sexy, yeah, they look good, I'm not going to argue with that, but I believe our products are driven by technology," says Twist, holding a clear model of the V8 that shows off its insides. "There's no space unused in here. Every single part of it is used in here. And we don't try to create a facade around it. We don't try to create a sexy outer. We let the technology do the talking. It just so happen that the technology that we're working with does look pretty cool."

This is not the ad that you see on EDSA, by the way. 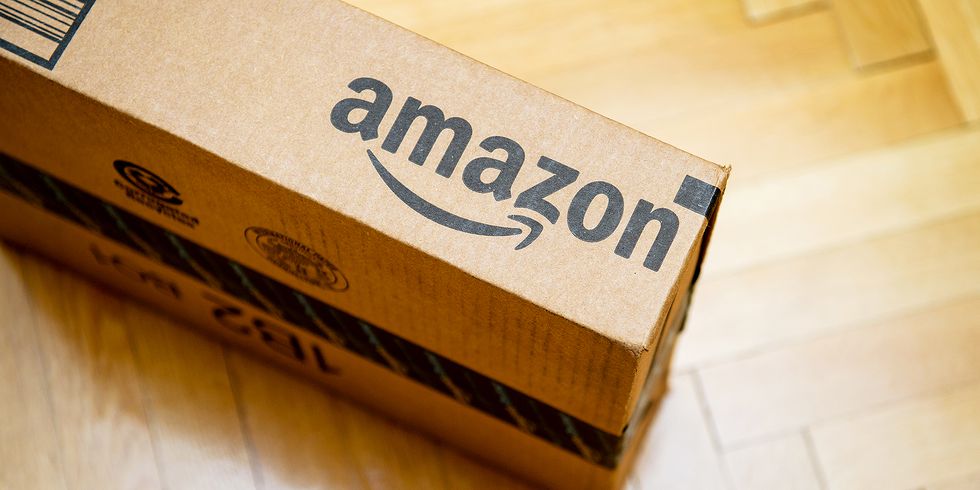