Chivas Regal Unveils an All-New Look For The Chivas 12

Chivas just dropped the biggest redesign in the brand's history, courtesy of the new Chivas 12.

The same, signature 12-year-old blended Scotch whisky has been leveled up with a bold bottle in a rich shade of ruby. You’ll still see the familiar rounded shoulders of the bottle design, but it now stands taller and prouder—and on greener credentials, too. The 12 years spent in the cask are honored with bold XII numerals, sitting below the sleek, emblematic Chivas crest, which you’ll also find etched carefully into the capsule and glass. 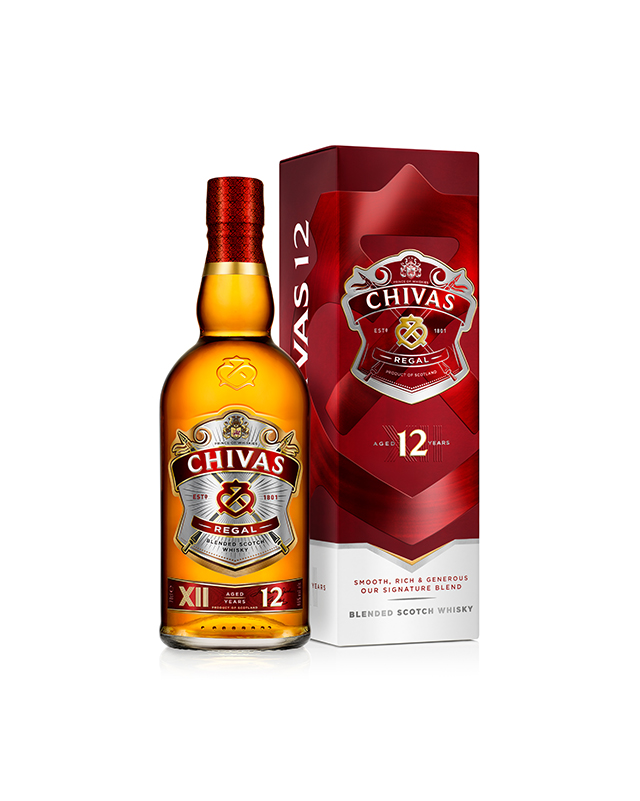 Recyclable materials
The entire redesign project was conceived with sustainability at its heart as part of the brand's target of having a recyclable, reusable, compostable, or bio-based packaging in the coming years.

The old Chivas Regal bottle
Chivas Regal started life as a 25-year-old whisky in 1909, but due to the Prohibition in the US, it largely disappeared in the late 1920s, re-emerging as a 12-year blend—Chivas 12—in the 1930s. Even then, in a red wax sealed bottle brandishing the words "Chivas Aberdeen", were the crossed lances that are still part of its identity today.

During the '30s and '40s, the evolution of Chivas 12 began to take shape until 1961, when the green bottle changed to white flint, and the classic shape wasn’t changed again for over 60 years.

At this time, the first carton was produced which depicted scenes from Scottish history and folklore. King Robert the Bruce on his battle charger and scenes from the Battle of Bannockburn were embossed into the foil carton alongside images showing Highland dress in the 16th to 19th centuries.

The Chivas Brothers Crest also depicted King Robert, with the Gaelic motto "Treibhireas Bunaiteachd" ("fidelity and stability") above him. The new Chivas 12 bottle pays homage to its incredible history while turning boldly to the future.

The same, signature taste
The unique blend that makes up Chivas 12 hasn’t changed. It's still using only the finest malt and grain whiskies, including Strathisla single malt, Strathclyde single grain, and more; and it’s still remarkably smooth and generous. Speyside flavors of crisp orchard fruits, wild heather, and sweet honey can still be found in every sip of Chivas 12, enjoyed neat or with your favorite mixer.

Whether you’re at home watching sporting events or out drinking, you can enjoy Chivas 12 in a variety of cocktails. From easy-to-make Whisky Highballs to playful slushies, invite your friends and family to enjoy the new Chivas 12 together.

Since the 19th century, its master blenders have maintained the classic taste blended by founders John and James Chivas, and now the brand is ushering in a new era in its colorful history.