For all the beer drinkers out there. 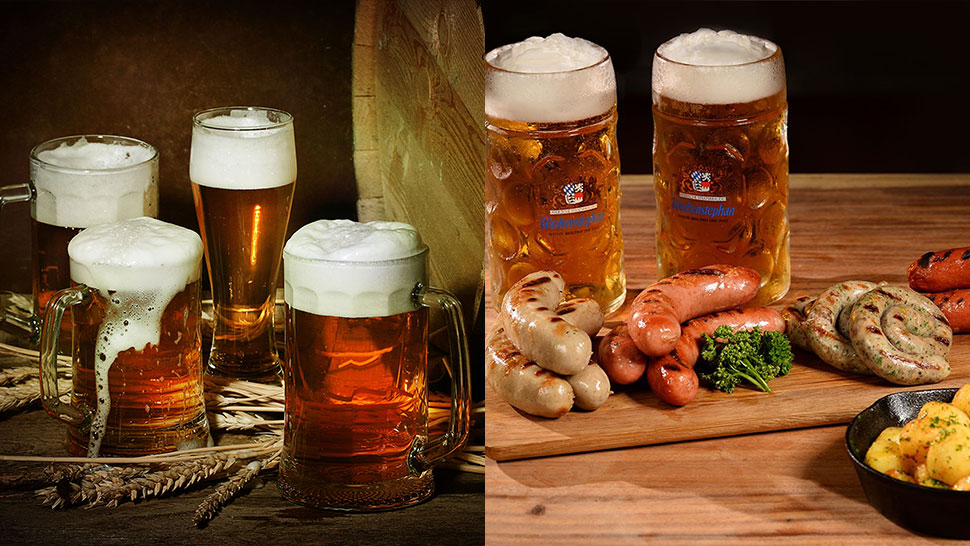 One of the biggest parties on earth happens right around this time in Munich, Germany. Oktoberfest is a Bavarian tradition that has been celebrated since the days of King Ludwig in the early 19th century. Since then, there have been many localized versions of the annual beerfest in all corners of the world, particularly in places where there is a strong German diaspora.

The Philippines is no exception. The local German Club hosts the “official” Oktoberfest celebrations locally, but other groups and venues offer their own take on it, no doubt riding on Filipinos’ love for beer. If you’re looking to celebrate as the Germans do, you can check out these Oktoberfest celebrations happening over the next couple of weeks.

German Club Manila is once again partnering with Solaire this year for what they call the “most authentic” Oktoberfest celebration in the country. Although Oktoberfest in Munich traditionally starts around the third week of September, the one here will happen on October 17 to 19, 2019.

Promising authenticity above else, the celebrations will include free-flowing Weihenstephan beer, entertainment by the Bavarian Sound Express, homemade German sausages, and delicacies made from old Bavarian family recipes. Expect to sample treats such as Weisswurst sausages, an assortment of meats such as pork schnitzel, Swabian red bratwurst, Kaesekrainer (Austrian version of a Polish kielbasa), and veal sausages. There will also be classic desserts like apple and walnut strudel with vanilla sauce and ice cream, and Kaiserschmarn, a dish made of shredded rum raisin pancakes with berry compote and vanilla sauce.

“This year’s 81st Oktoberfest will continue to be authentic and put the spotlight on the best of German culture,” said Solaire’s Vice President of Food & Beverage Knut Becker. “Following a very successful Oktoberfest celebration last year, we are thrilled to be hosting once again German Club Manila’s Oktoberfest celebrations and look forward to continuing this partnership.”

For more information and ticket reservations, call the German Club at 894 2899 or 818 4236 or book online at www.oktoberfest.ph

Solaire’s next-door neighbor is holding its own version of the beer extravaganza and calling it Octoberfest (yes, with a “C” instead of a “K”). The gaming complex is pulling out all the stops and building an actual replica of a Bavarian village in its Crystal Corridor to better put their guests in a beer-guzzling, sausage-munching mood.

Of course, they’re offering unlimited authentic German food, prepared at live cooking stations, including poached Munich veal sausages, Bavarian meat loaf with potato salad, and Bavarian snacks called brotzeitbrettl. Like the one in Solaire, Okada’s Octoberfest will also serve its guests with free-flowing German Weihenstephan delivered via “beer maidens.” Of course, there will also be lively music courtesy of a German band flown in especially for the celebration, as well as interactive games, game booths, a photo booth, and a raffle of premium prizes.

“Octoberfest is very special as it is that singular event where you gather with your friends or family and just have pure good time with great food, drinks, music and fun,” says Okada Manila’s F&B Director Sumit Rajput. “And Okada Manila is proud to be the only venue that provides the biggest and most lavish celebration ‘indoors’, thanks to the Crystal Corridor’s state-of-the-art climate control.”

3. The Brewery at The Palace

The Brewery’s own Oktoberfest, which they’re calling Draftoberfest, stays true to the spirit of the German festival. There’s Bavarian-inspired decor, Lederhosen- themed getup of servers, and cold appetizers for guests as soon as they enter. As for the beer, The Brewery is serving ice-cold, unlimited Paulaner all night long.

For grub, there’s a sausage bouquet and platters filled with bratwurst, wienerli, crispy pork knuckle, chicken skewers, and a side of sauerkraut. There’ll also be a live band, a beer-drinking contest, a mini pretzel relay, and awarding of the best Lederhosen and Dirndl of the night, for those who want to be true Bavarians for a night.

Draftoberfest happens on September 27, 6 p.m. at The Brewery At The Palace.

Tickets for just P999 can be bought at any Draft Restaurant & Brewery branch (Greenbelt 2, Rockwell, Ayala Malls The 30th, Molito Alabang) or The Brewery At The Palace in Bonifacio Global City. You can also purchase tickets via Eventbrite.

If you’re looking for something a little more low-key, head to Vu’s Sky Bar and Lounge at the Marco Polo Ortigas Manila. Starting September 27, you can order a half-liter of Paulaner draft beer for P340, and it comes with a platter of German sausages for P999.

The promotion is available from 5 p.m. to 12 midnight.

Resorts World Manila puts a twist to the traditional Oktoberfest celebrations with what it calls October Fiesta. As part of its 10th anniversary this year, the integrated resort and casino is featuring over 30 craft beer brewers from the Philippine Craft Beer Community (PCBC) at the event. It’s an opportunity to raise awareness on the vibrant local craft beer industry.

From only two in 2010, there are about 60 active local brewers today, producing original craft beers from sweet stouts to IPAs. RWM, quoting SEA Brew during its Annual Brewers’ Conference in Southeast Asia last year, says the local craft beer industry reached an annual retail market value of $12.9 million in 2018.

“October Fiesta is a unique celebration wherein mouthwatering food, good music, and distinct craft beers take the main spotlight the way Filipinos usually celebrate parties,” shared RWM Director for Corporate Communications Joee Guilas. “This year, we’re fortunate to have the PCBC as our partners for October Fiesta to give our guests a taste of genuinely homebrewed, and homemade craft beer creations.”

Those attending October Fiesta may choose from a selection of over 30 craft beers, which they can ‘mix and match’ with signature RWM ‘pulutans’ including Franks’ Pinoy Hotdogs (available in Adobo, Inasal, and Bistek Tagalog); Franks’ Sisig Wrap; RWM Fiesta Ham; and Bolahan’s selection of ‘tusok-tusok’ favorites. Meanwhile, featured musical artists include Paolo Santos, Migz Haleco, Davey Langit, New Maincast, and Julius during the first day; and Hans Dimayuga, Tiara Shaye, Juno, and Hello Ceasar on the second day.

October Fiesta happens on October 4 and 5, from 4 p.m. to 12 midnight, at the second floor of the Newport Mall. Door charges are at P1000 inclusive of five RWM beer chows, three local craft beer servings, and one raffle coupon. And for only Php400, guests may enjoy two local craft beers samples, and one souvenir pilsner glass.

Out of the Ordinary: 3 Scotch Whisky Brands To Try on Your Next Night Out
All Photos
Comments
View As List