Whether you like traditional London dry style, new-school botanicals, or something that's just plain weird. 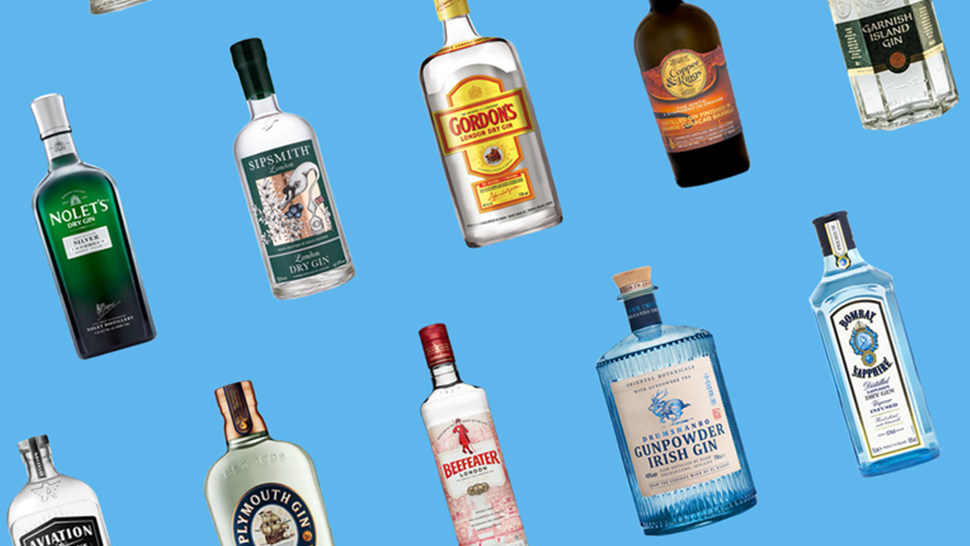 After a cold whiskey winter, gin is flowing once again as bars debut spring menus focused on herb- and fruit-forward cocktails made with clear spirits. Make no mistake, gin is legitimately back in fashion, with distilleries all over the world crafting versions of this centuries-old spirit that capture the character of the individual locales from which they derive. Gin is mother’s ruin no more, and this shift has been a long time in the making.

The old guard still distills London dry-style gin in the U.K. The main rules of this designation are that juniper must be the dominant flavor (as it is for all gin) and botanicals must flavor the gin during distillation, with no flavor or color added afterwards. (London dry gin does not, in fact, have to be made in London.) Brands like Beefeater and Tanqueray are classics for a reason, but the world of gin has expanded enormously over the past 20 years as new distilleries tinker with the formula.

When Hendrick’s Gin launched in 1999, master distiller Lesley Gracie decided that cucumber and rose would taste pretty good in a gin, along with more traditional botanicals. And she was right, as Hendrick’s inspired many others to take a chance on different ingredients. “Everybody that’s associated with gin credits Hendrick’s with the fact that it caused the ‘Ginaissance,’” said Gracie from her lab at the new Hendrick’s Gin Palace in Scotland's Girvan distillery. “In the late ‘90s, the gins that were on the market were really quite light, just the standard flavor of gin. Suddenly, gin became fashionable again.” Gracie also credits the resurgence of cocktail culture at the time with helping to propel the new wave of gin.

ADVERTISEMENT - CONTINUE READING BELOW
Do you prefer a gin martini or a more complex gin cocktail?

I always go for the classic martini.

There is now excellent gin to be found in all corners of the world, from India to Ireland to Japan. San Francisco’s Hotaling & Co. (called Anchor Distilling at the time) helped start the American craft gin movement in the mid-‘90s when it released Junipero Gin. You can find interesting gin in nearly every state, with many distilleries trying out different flavors or using a variety of barrels to age the spirit. As Gracie said, we are in the middle of a Ginaissance that isn’t showing any signs of slowing down. Here are some of the best gin brands available now, from traditional London dry to brand-new variations. 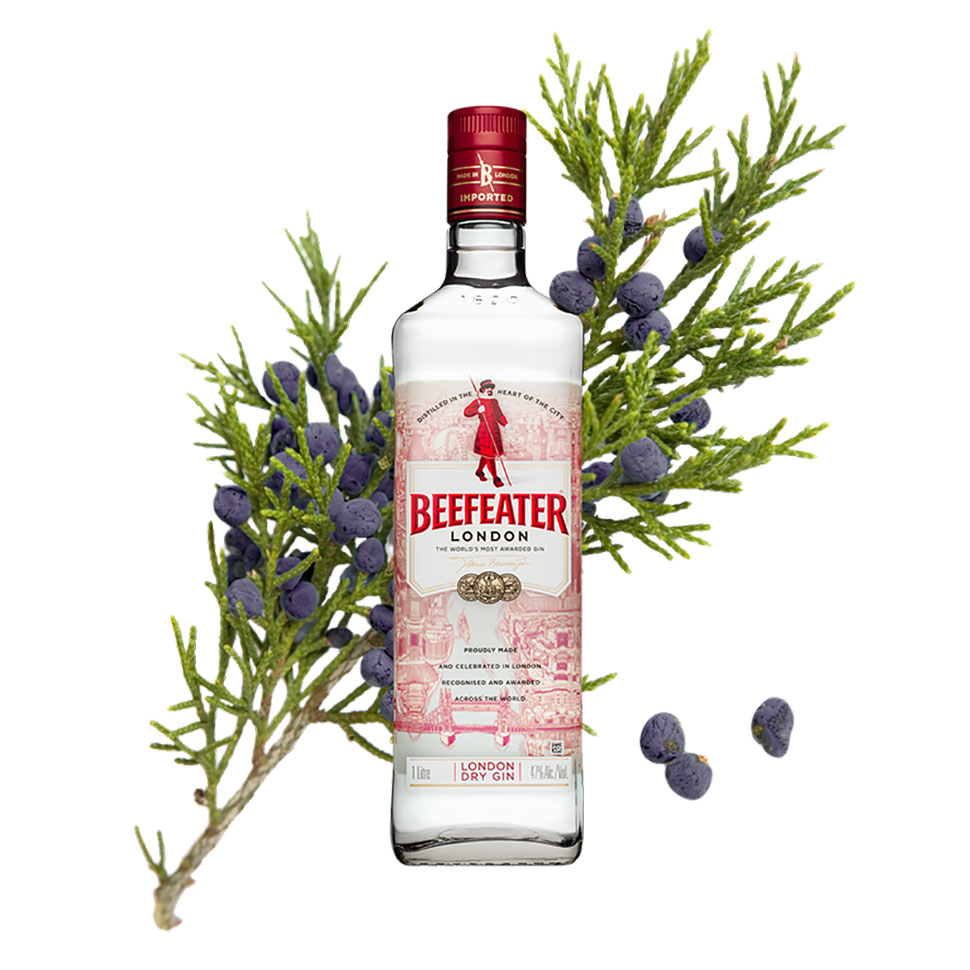 Beefeater is a classic London dry gin, with a juniper- and citrus-forward recipe that dates back to the 1860s when James Burrough began to distill gin in London. The botanicals are steeped in neutral grain spirit for 24 hours before distillation. In addition to classic Beefeater, there’s also Beefeater 24, made with extra botanicals like Japanese sencha and Chinese green tea; Burrough’s Reserve Edition 2, rested in red and white Bordeaux casks to pick up color and flavor; and the latest, the strawberry-flavored Beefeater Pink. 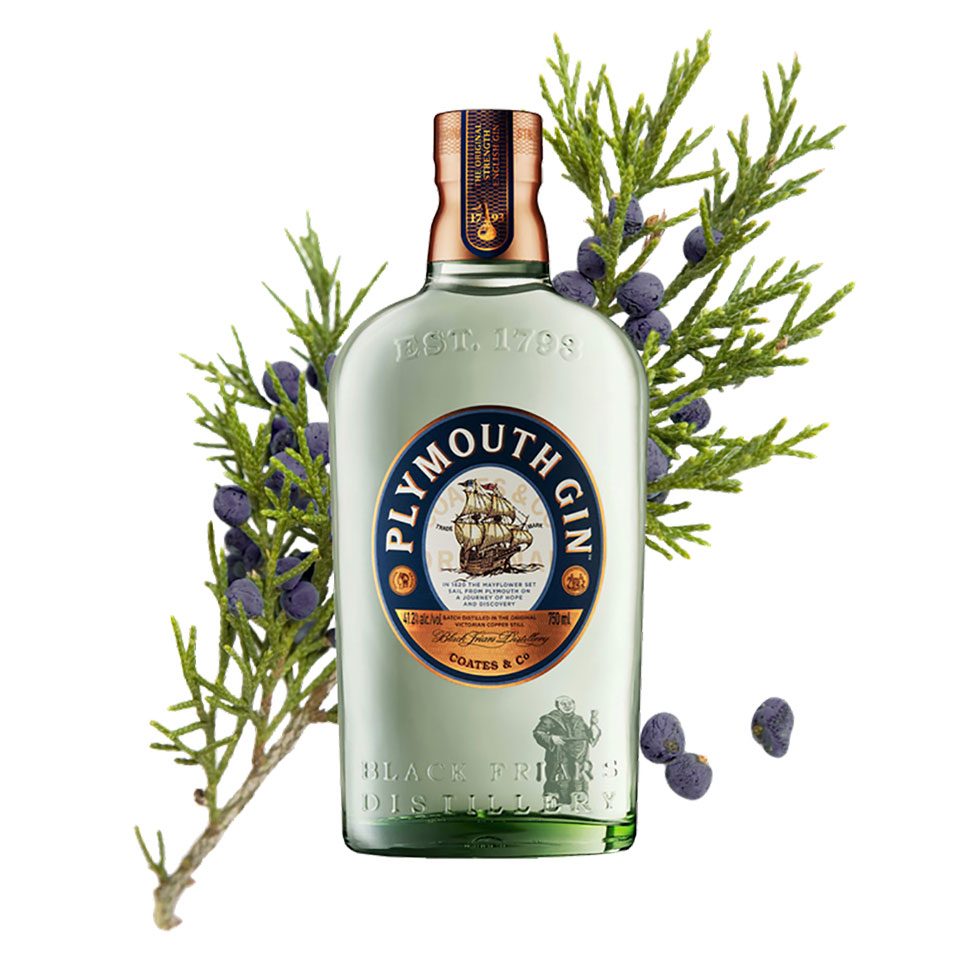 Plymouth Gin has been produced at the historic Black Friars Distillery since the late 18th century. The botanical mixture includes juniper, lemon peel, and angelica root, resulting in a simple yet flavorful spirit that works well in many cocktails. If you are looking for something that packs a bit more punch, try the Navy Strength, which is bottled at 57 percent ABV, allowing it to shine more when mixed with other ingredients. 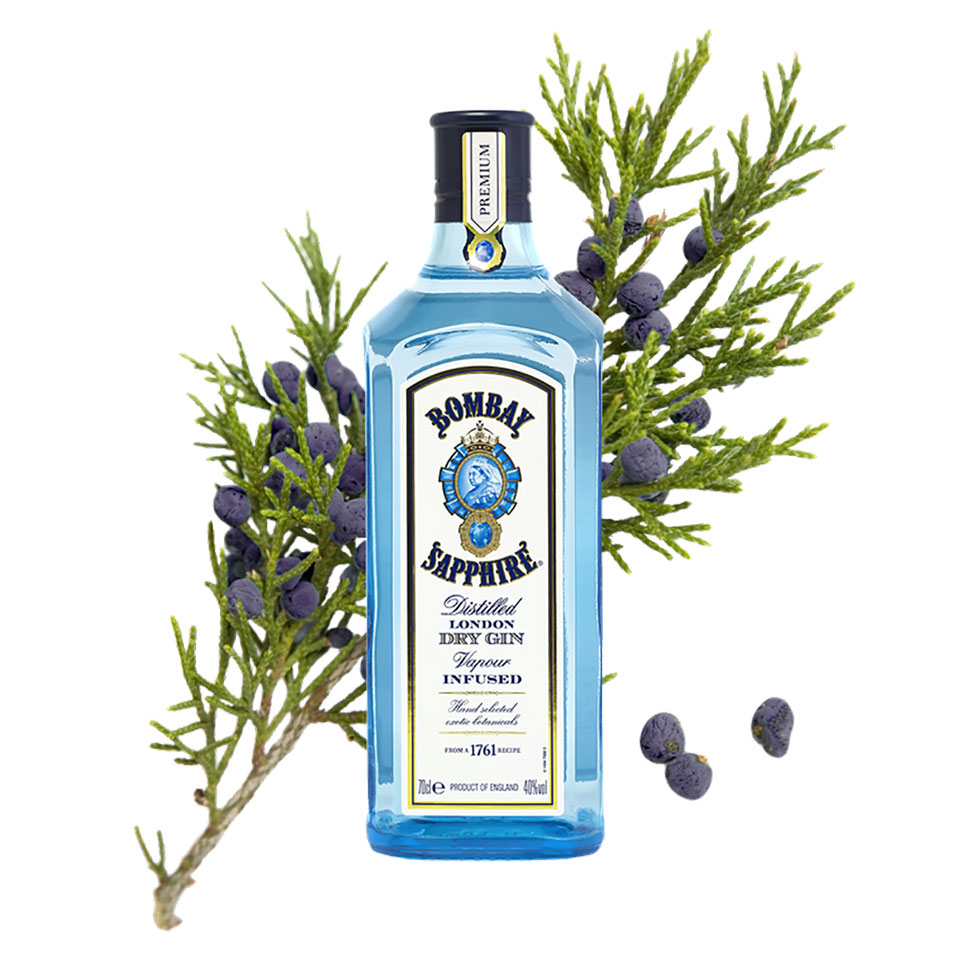 Bombay Sapphire is a ubiquitous and easy-drinking gin, but that’s not a dig at the quality. The distillery “vapor infuses” flavors like juniper, licorice, and almond into the alcohol as it vaporizes and rises in the still. This may not be the most exciting gin on the market, but that’s not why you’re drinking it—you’re drinking it because it’s familiar and you can make an excellent martini with it. There are two other expressions available: Bombay Sapphire East, made with Asian botanicals, and Bombay Dry Gin, made with just eight botanicals. 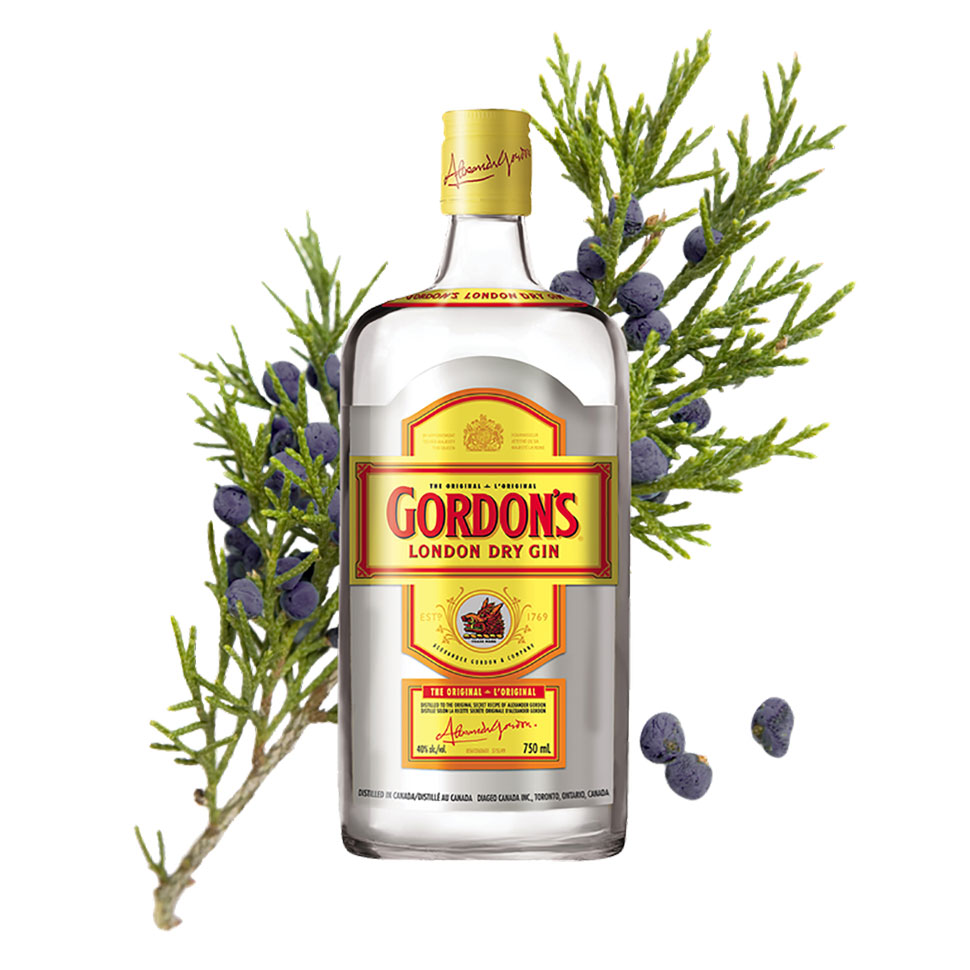 Gordon’s was reputed to be Hemingway’s favorite gin, and it was an essential ingredient in James Bond’s Vesper cocktail in Casino Royale (and yes, it tastes good shaken, not stirred, with tiny shards of ice throughout). This brand is simple, satisfying, and cheap, whether you are drinking it from a plastic handle or a more refined, 750ml glass bottle. You’ll find big notes of juniper with a bit of garden herbs and black pepper to round things out. It's the perfect martini gin for any occasion. 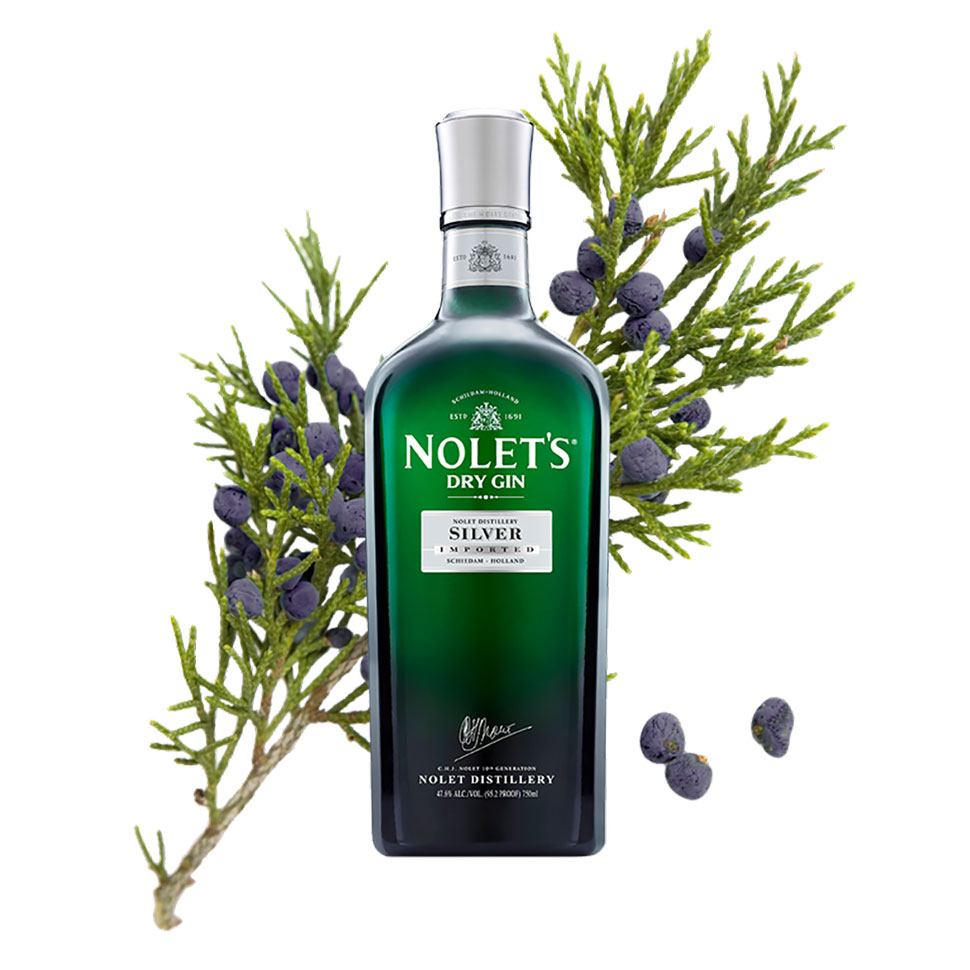 Nolet’s comes from Holland, the ancestral home of gin, where its predecessor genever was first distilled. The distillery has been making spirits since the 1690s, the most notable (and profitable) of which is Ketel One vodka. A few years ago, Nolet’s Silver launched, a gin that eschews the traditional juniper-forward palate for uniquely sweet and fruity notes from the use of raspberry, peach, and Turkish rose as prominent botanicals. The more expensive Nolet’s Reserve is flavored with saffron and verbena, and meant to be a sipping gin rather than a cocktail component. 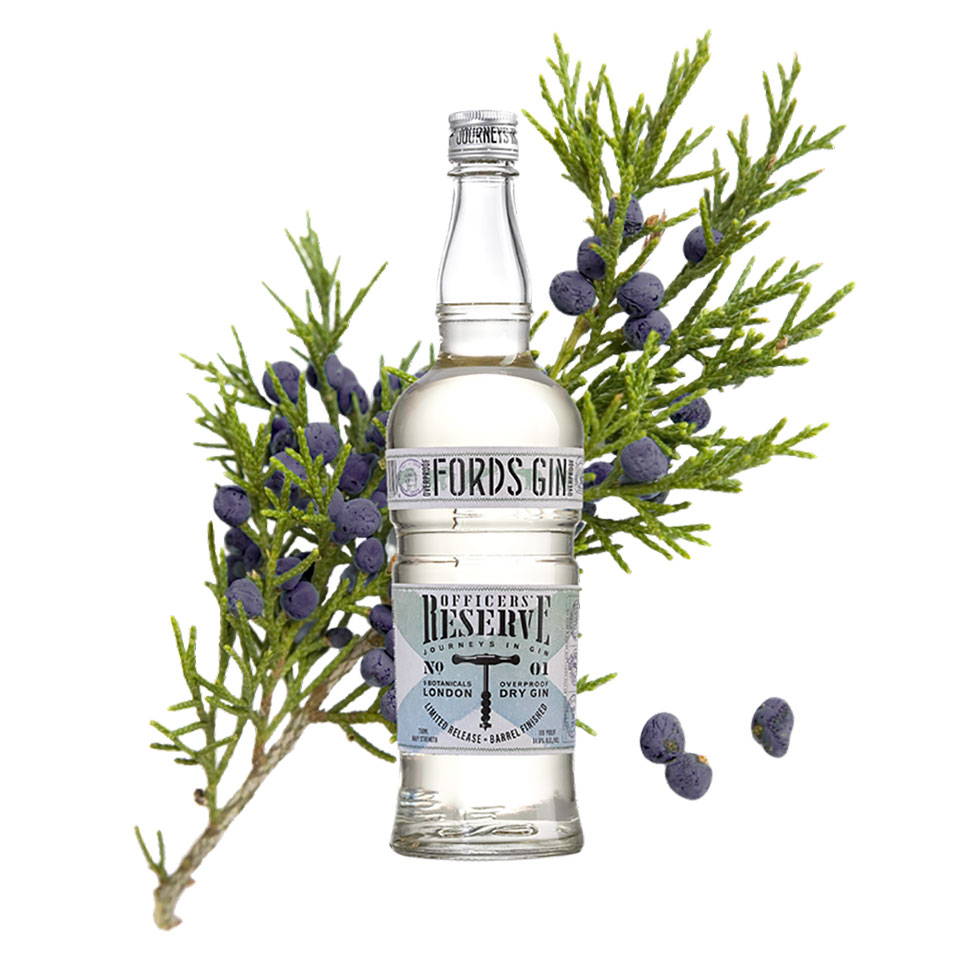 Fords has been around since 2012, when former Plymouth Gin brand ambassador Simon Ford founded The 86 Co., a spirits brand that focused on bartender input to create its lineup. Master distiller Charles Maxwell makes the gin in London, steeping the botanicals (juniper, coriander, grapefruit, jasmine, etc.) for 15 hours before distillation. The latest release is Officers’ Reserve, an over-proof spirit (109 proof) that spent three weeks resting in sherry casks as a throwback to the days of gin in the British Royal Navy. 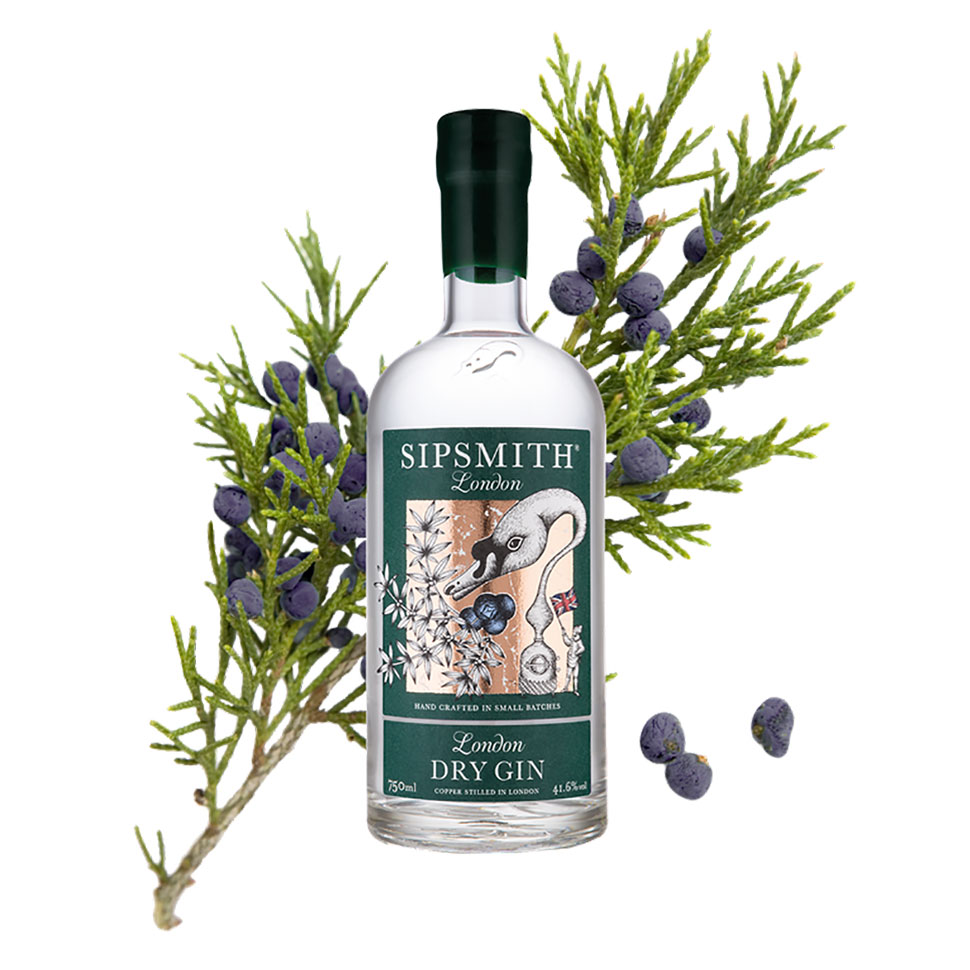 Sipsmith’s claim to fame is that it was the first copper pot still distillery to operate in London in nearly two centuries when it opened in 2009. Its other claim to fame is that it’s a very good modern take on London dry gin, flavored with juniper, orris root, cassia bark, and ground almond, among other botanicals. There are a few expressions available, including the more juniper-forward and higher proof VJOP (Very Junipery Over Proof) Gin, and the latest release here in the U.S., Lemon Drizzle, which has an almost limoncello character to it. 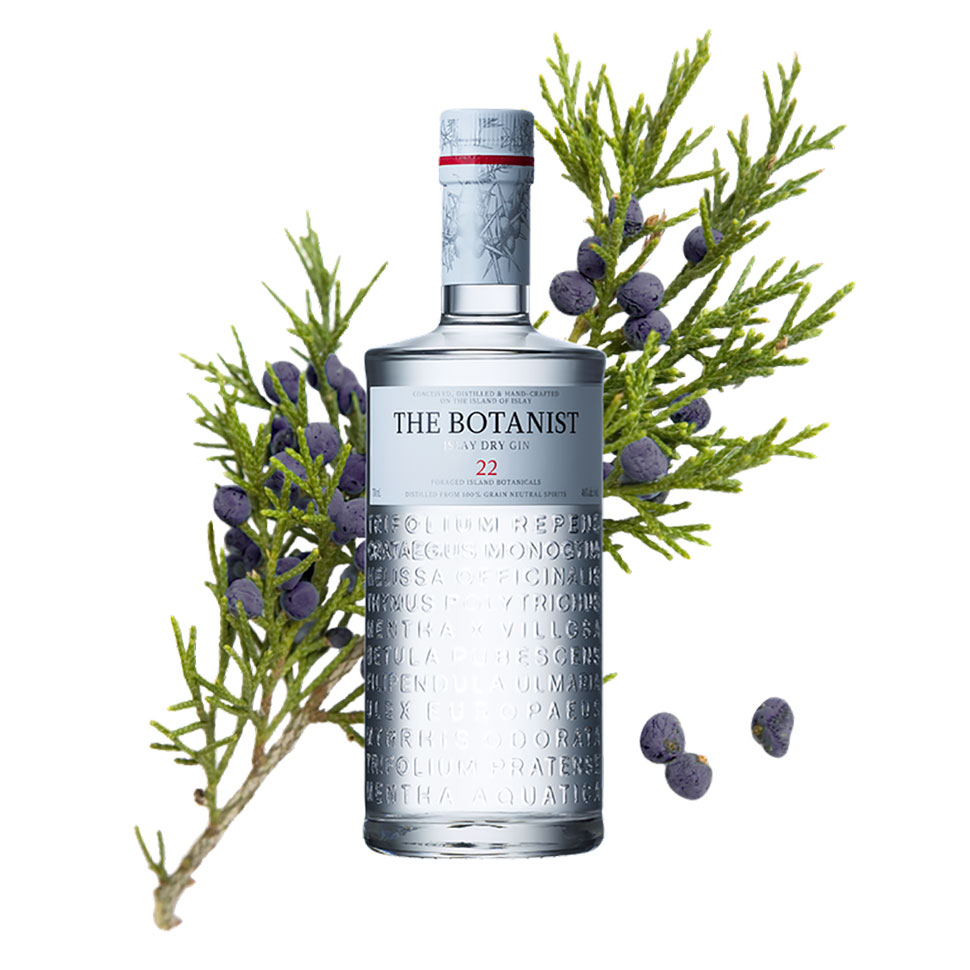 The Botanist Islay Dry Gin is made at the Bruichladdich distillery on Islay in Scotland, a region known more for its peated single malts than its clear spirits. This gin uses 22 different botanicals foraged on Islay, including heather, lady’s bedstraw, meadowsweet, and juniper. The result is a nice balance between floral and dry pine, making this a good gin to use in a simple martini or something more complex with fruit elements. 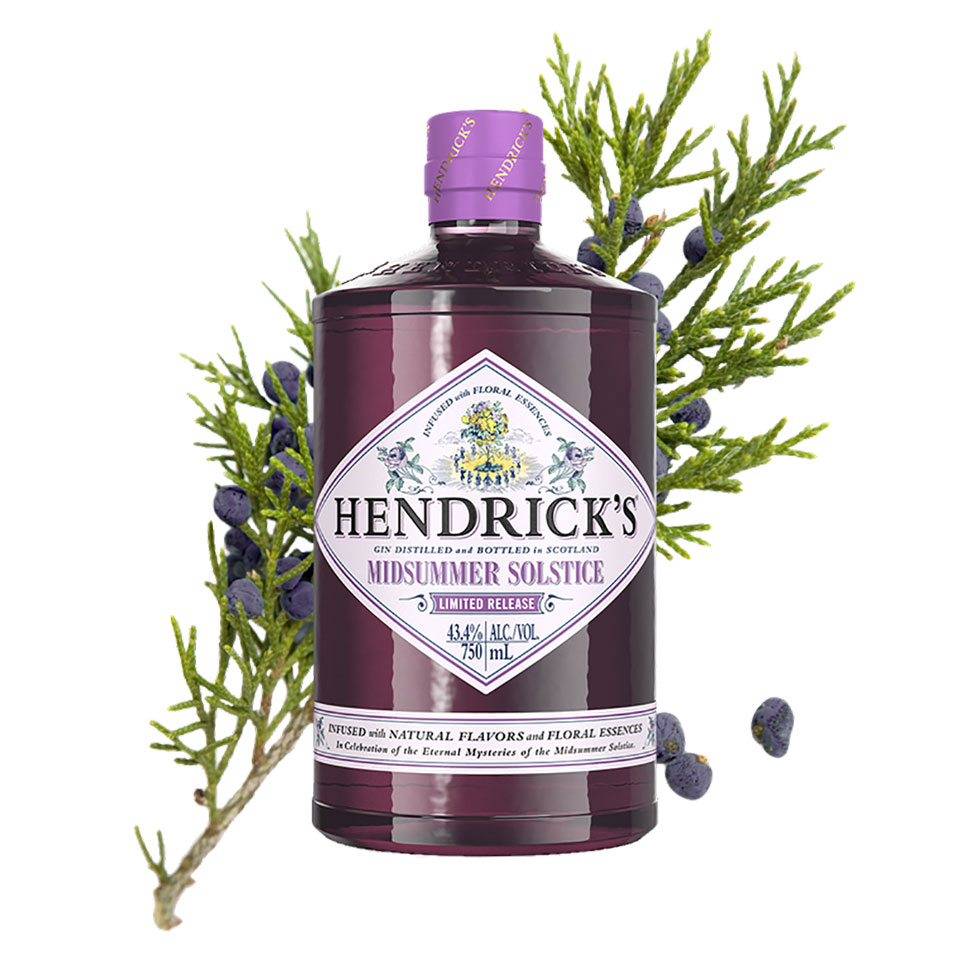 Hendrick’s led the new wave of gin when it launched back in 1999, using extract of cucumber and rose to flavor the spirit in an unusual but ultimately very successful move. The latest iteration of this Scottish gin is Midsummer Solstice, a gin that master distiller Lesley Gracie says was inspired by a wedding bouquet. It’s flavored with a secret combination of flower extracts that gives it a sweet and fruity flavor, closer to something like Nolet’s than anything in the London dry category. 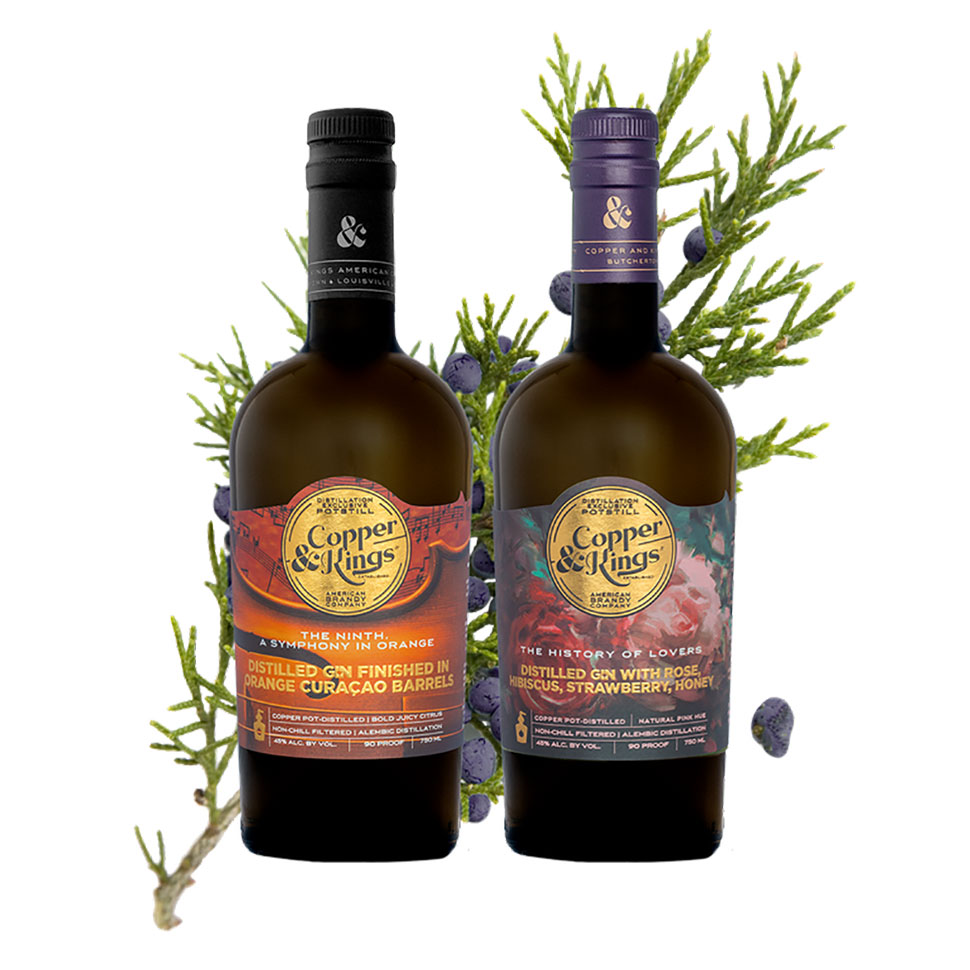 Copper & Kings is a quirky brandy distillery located in Louisville, Kentucky, that is making some of the most interesting spirits in the American craft-distilling world. The distillery just released two new gins: The History of Lovers, a pink gin flavored with rose flowers, and The Ninth, a gin flavored with blood orange and finished in orange curaçao barrels. The gin distilled here is not made from neutral grain spirits; instead, the distillery’s brandy is used as a spirit base, meaning that every step of the process is done in-house. 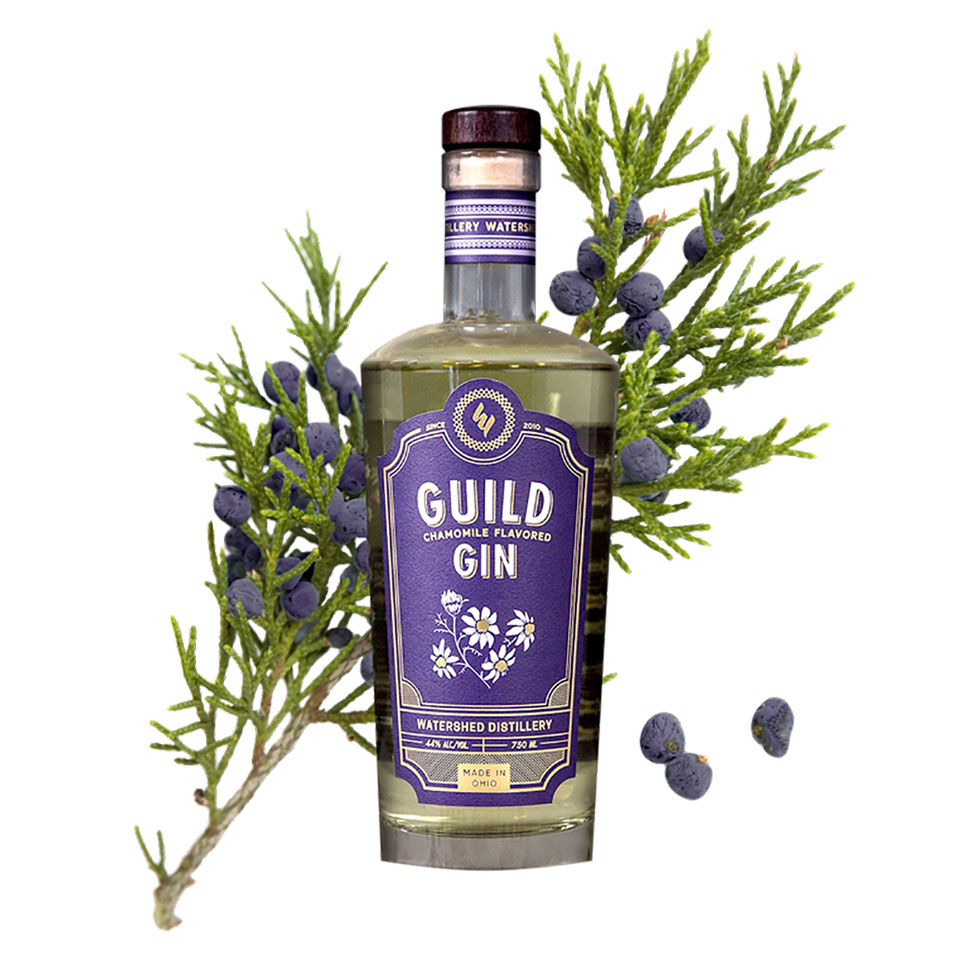 Ohio’s Watershed Distillery makes a variety of spirits, including some very tasty gins. Four Peel Gin is the citrus-forward flagship; it was released in 2010 as an attempt to win over people who might think they don’t like gin. The latest release is the distillery’s Chamomile Flavored Guild Gin, previously only available at the distillery and its partner restaurant. It’s made with apple and corn spirit, which is flavored by macerating dried chamomile flowers into the spirit after distillation. This one is far from your average gin, with bold spice and tea flavors, but the gin-curious should give it a try. 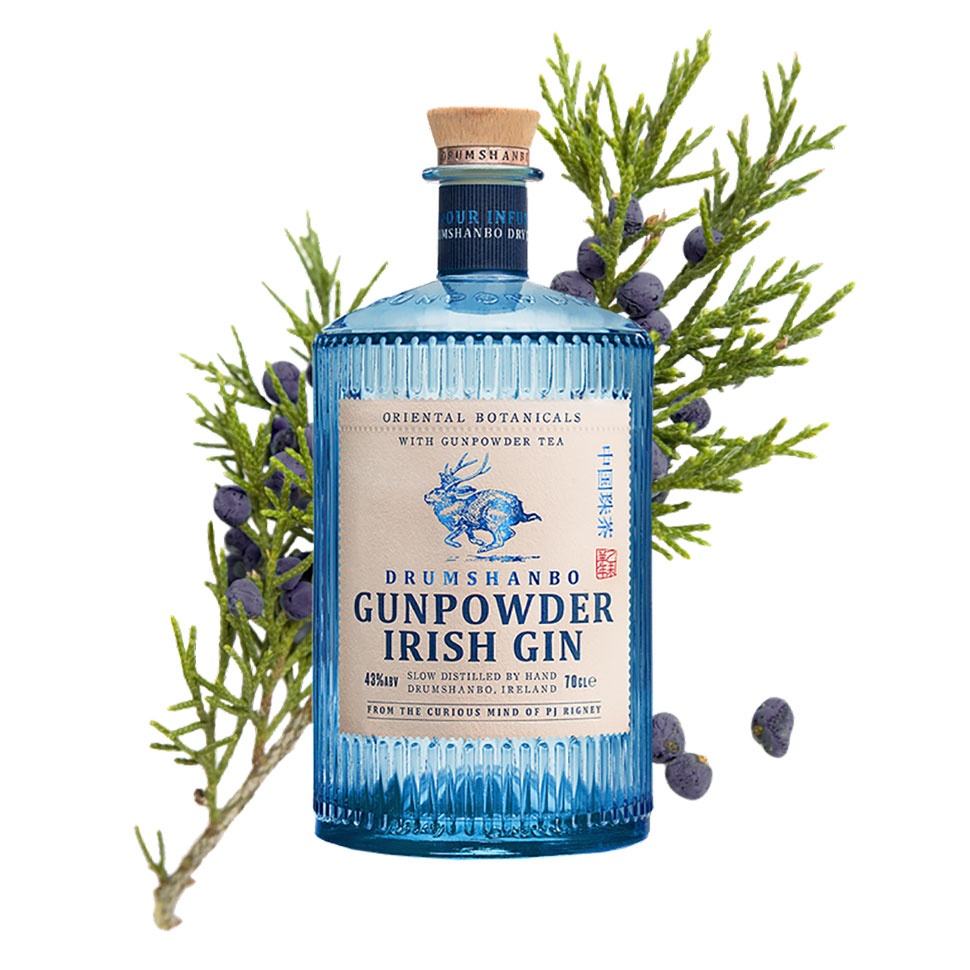 Ireland is another country that’s been getting into the gin game over the past few years with some very unique releases. Drumshanbo Gunpowder Irish Gin is named after the city that it’s made in, and in addition to the usual botanical suspects, this gin also uses lemon and lime from Asia and gunpowder tea. The juniper works well with these spicy notes, resulting in a gin that’s a little bit sweet, a little bit floral, and very different. 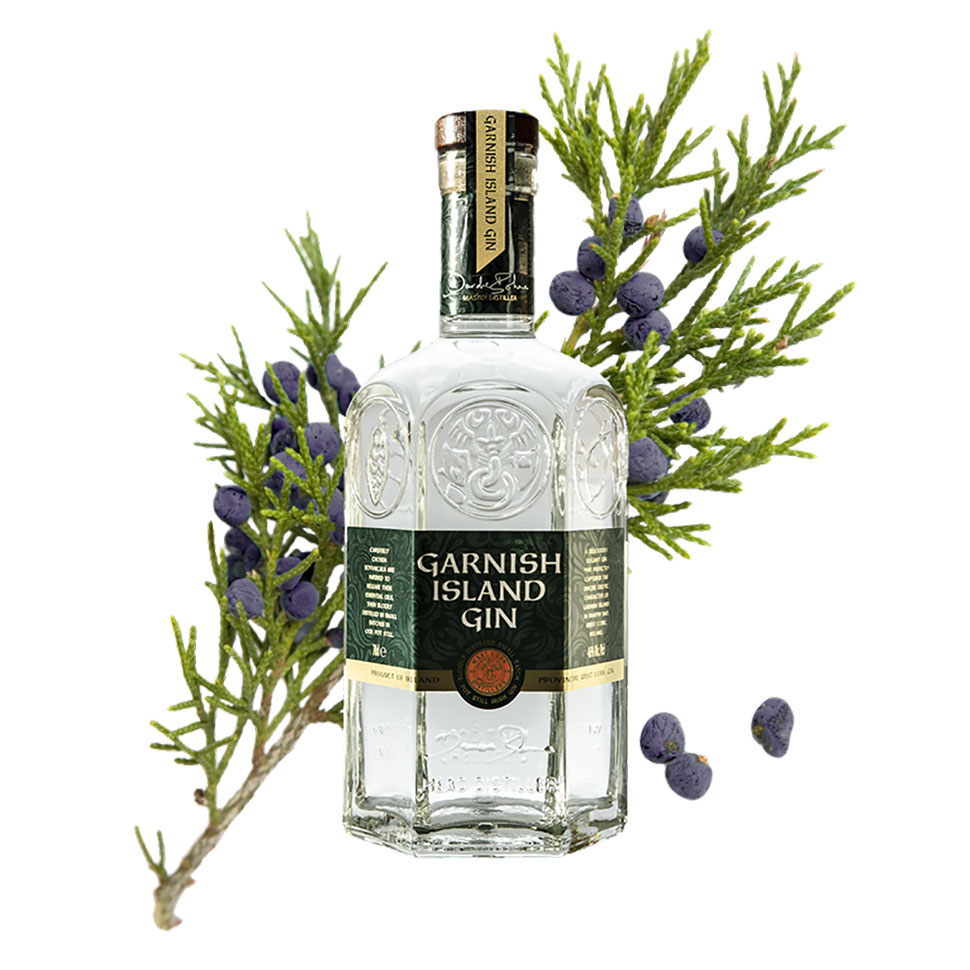 This is another Irish gin, a new release from the whiskey makers at West Cork Distillers. The botanicals in Garnish Island include rose, hibiscus, iris, rosemary, and thyme. These melded flavors aptly bring to mind the Italian gardens on the island for which it’s named. 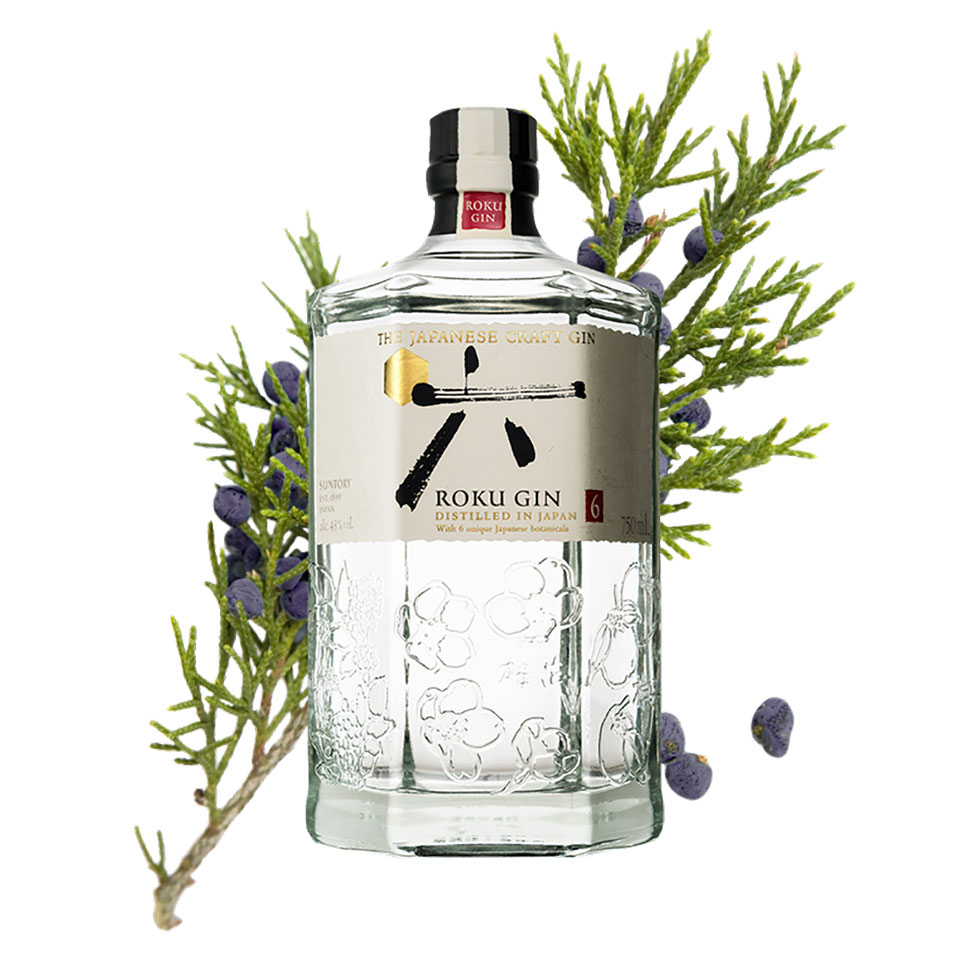 Last fall, Japanese beverage giant Suntory released its first gin in the U.S. market. Roku means “six,” referring to the six Japanese botanicals that are used as flavoring agents here (along with other more traditional botanicals): sakura flower, sakura leaf, sencha tea, gykuro tea, sansho pepper, and yuzu peel. The result is a floral and citrusy spirit with just a hint of spice at the back of the palate.

About The Author
Jonah Flicker
View Other Articles From Jonah Flicker
Get The Latest Updates From Esquire!
Subscribe to our newsletter!
Latest Feed
Load More Articles
Esquire Money 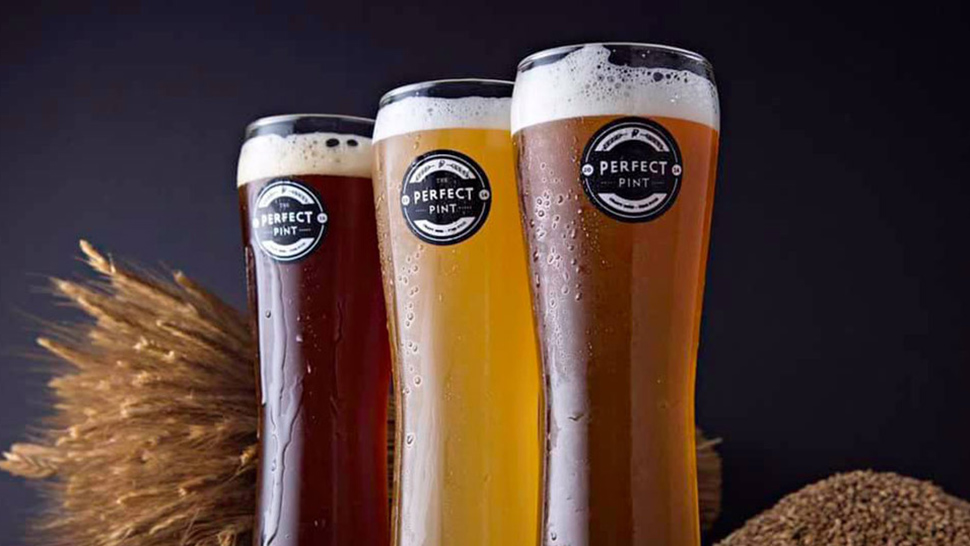