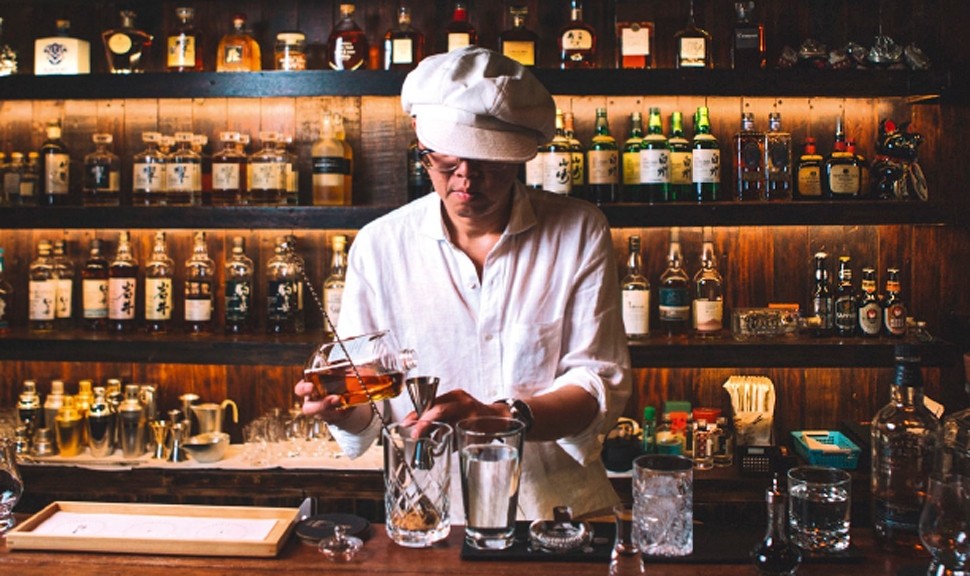 Lit feels serious. Solemn, even. The bar, which specializes in serving Japanese whiskey, offers an experience unlike any other in Metro Manila. It is less raucous, more refined. They will only let in 25 people at a time, most of them seated on stools in front of the long, wooden bar counter, which dominates the space. Groups are welcome, of course, but this feels like the kind of place where a person should be sitting quietly alone, enjoying a drink rather than company. Bartender and co-owner Francis Hasegawa is on hand to lead the unfamiliar through the vast, rapidly developing world of Japanese whiskey. He offers these five recommendations:

Newcomers to whiskey as a whole will appreciate the accessibility of the Nikka 12 Years. Hasegawa likens the experience of drinking it to a “warm embrace,” the whiskey slowly opening up revealing layer after layer of delicate flavor. It is sweet and light, and served on the rocks it is as fine and as gentle an introduction to whiskey as one can get.

Drinkers looking for a bigger punch of flavor will be well served by the Nikka Miyagikyo 15. Taken neat, it offers an explosion of floral sweetness with just a hint of satisfying spice. Hasegawa admits to liking it served as a highball, where it becomes the alluring perfumed base to a refreshing summer drink.

Whiskey isn’t exactly known for its tropical flavors, which makes the Yamazaki 2014 Limited Edition such a surprising treat. Its most prominent flavors are pineapple and mango, the tropical fruits lending the spirit a juicy, weirdly bright quality that offsets the typical darker notes of whiskey. Most people think of whiskey as a sad drink, but this Yamazaki offers bursts of sunshine within its murky depths.

Lit also serves cocktails. They offer a version of the Old Fashioned that replaces the sugar cube with muscavado sugar. Serving as base is Nikka From the Barrel, a whiskey that Hasegawa recommends as having the most “bang for the buck.” It takes on some of the qualities of bourbon, with a grainy sweetness melded with orange with rich notes of spice. This may sound weird, but the Old Fashioned tastes likes a better, more adult of Royal Tru Orange.

Advanced drinkers might want to take on the Mars Komagatabe. “When I first tasted it, I didn’t know what to make of it,” Hasegawa says. It hails from the Mars distillery, which has only recently gotten back into making whiskey. This young spirit offers pronounced umami notes that give it an almost soy sauce like quality. It is inky and meaty, and arrives like a punch to the palate. It likely isn’t what many would of as a drink, but it is deeply satisfying in strange, mysterious ways.

About The Author
Philbert Dy
Philbert Ortiz Dy is no stranger to this magazine. The resident film critic for Clickthecity.com won 2nd place at the first Philippine Graphic/Fiction Awards and was a finalist at the 2007 Cinemanila Scriptwriting contest. He has also written and produced short films and contributed to numerous publications.
View Other Articles From Philbert
Get The Latest Updates From Esquire!
Subscribe to our newsletter!
Latest Feed
Load More Articles
Esquire Money