These days, the newer generation of tipplers would know Destileria Limtuaco for their Manille Liqueur de Calamansi—a local take on Italian limoncello that has become a hit with Filipinos and a pasalubong favorite. But it wasn’t so long ago that the distillery’s flagship products were White Castle Whisky and sioktong.

Over 166 years, Destileria Limtuaco has developed countless products, weathered crises, and stood the test of time. And last month, the country’s oldest distillery finally opened its museum to the public. 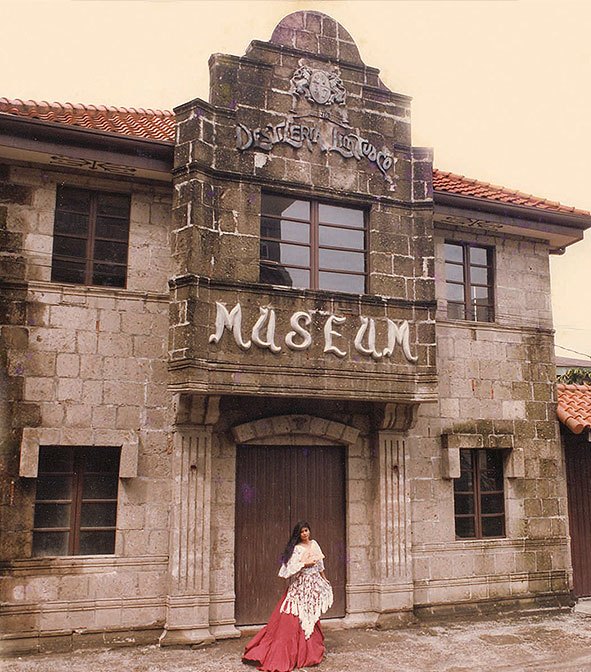 Located in Intramuros, the museum is housed in a bahay na bato that then-CEO Julius Limpe acquired back in 1979. It was he who came up with the idea of building a company museum, but it was his daughter, Destileria Limtuaco President Olivia-Limpe Aw, who realized his vision nearly 40 years later.

The museum’s first floor exhibits show the actual process of making rum and whisky, from fermentation and aging to bottling.

Their “process of making rum” exhibit includes a mini tank of fermenting molasses and a distillator. Visitors can open a jar and sniff to found out what fermented molasses smells like. 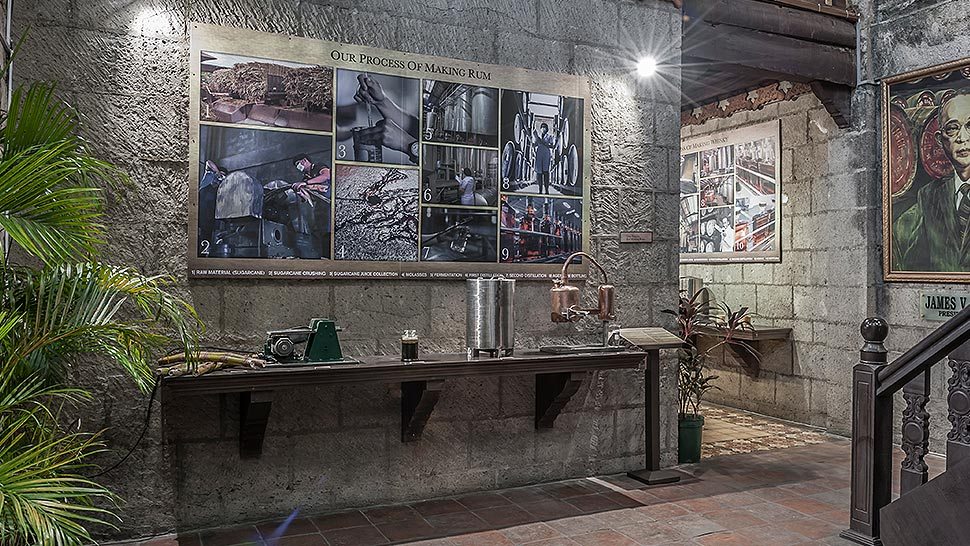 Their whisky exhibit also displays a tank of fermenting corn. As of late, the family has been experimenting with blending their whisky from scratch. “This is the first locally, wholly domestically produced whisky,” says Aaron Limpe-Aw, business development manager and son of Olivia Limpe-Aw. “Kasi usually nag-iimport lang tayo ng flavors and then we blend it. But this one, we’re really making it from scratch and we use 100% yellow corn from Isabela.”

The exhibit also features a working corn distillator. “We want to be very open with our processes. We want to show people that we’re making it the right way,” Limpe-Aw explains.

But the most fascinating aspect of the museum is how it highlights Destileria Limtuaco as an enduring family legacy. One wall displays portraits of the company’s four presidents. 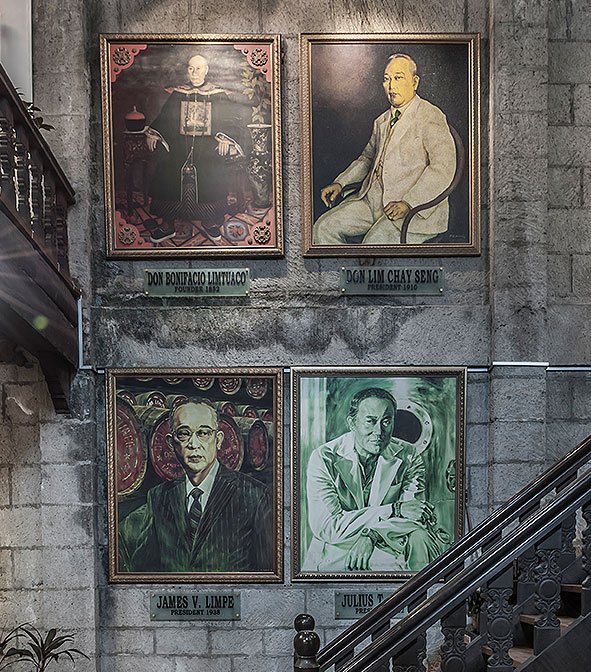 The first is Lim Tua Co, a Chinese immigrant who sailed to the Philippines with a secret recipe for siok hoc tong or Chinese herbal wine. “A Chinese name is usually three characters—the first part is the last name, so his [surname] was Lim,” Limpe-Aw explains. “So when he anglicized it, his whole name became his last name, and his first name became Bonifacio.”

A corner of the museum dedicated to sioktong displays vintage bottles, along with the 15 Chinese herbs used in Lim Tua Co’s secret recipe (good luck identifying them). A TV screen plays old Kung Fu commercials, too.

Over the decades, others have tried to make and sell their own sioktong at a cheaper price by using flavoring. When asked about sioktong's less savory reputation as a "pampalaglag" or abortifacient drink, Limpe-Aw says, "We don't market it as pamparegla, but actually, we can't control it either. Because the 'pamparegla' that they sell is not just sioktong, I think it's sioktong with other stuff because it's sold in different bottles. So I can't really say for certain that it's sioktong that's pamparegla because it's like a concoction already. Personally, we don't tell our salespeople to sell it as pamparegla, but we can't stop people from buying it and then doing that themselves."

What Destileria Limtuaco does say on their website is that their original sioktong can help improve blood circulation. "Some people actually buy it for dysmennorhea," Limpe-Aw adds. "Because of the blood circulation. But then other alcohol can be used for that. Some people take beer, some people take wine, but you can also take this. It's an all-natural product, so I don't know how it became pamparegla. We take spices and herbs and we macerate them, add some sugar, and that's basically it."

Because Don Bonifacio Limtuaco’s son Carlos suffered an early demise, the company was passed on to his eldest nephew Don Lim Chay Seng. “He’s really the one who introduced more of the Western spirits,” Limpe-Aw says. “Rum, and then gins. Ginebras is what they called it.”

Don Lim Chay Seng then passed the business on to his own son, James Limpe. “It became Limpe because the last name was Lim, but at the time it was fashionable to add a syllable to the end of your name to make it more Western-sounding,” Limpe-Aw says.

The second floor of the museum gives a more concrete sense of the family history by putting James Limpe and his wife Juana’s personal effects on display. “He was educated in Seattle, so his approach was more Western: whiskeys, rums, vodkas, even,” Limpe-Aw explains. “He was an English teacher, so he met his wife, a Chinese teacher, at the school where he was teaching.” 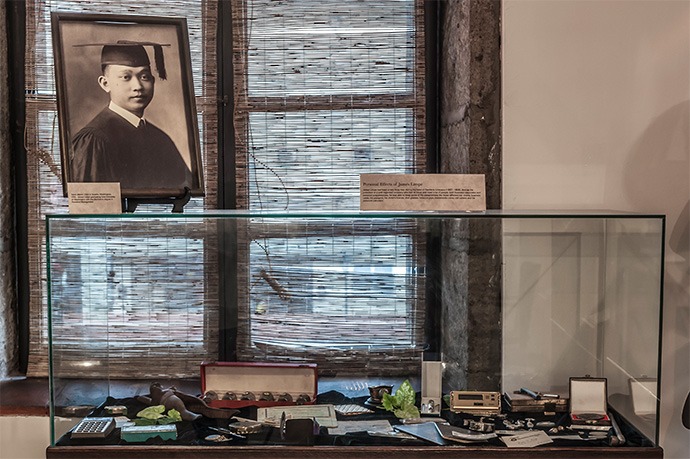 It looks like James led a pretty interesting life—among his belongings, his family unearthed a key to the city of Sacramento, though they couldn’t find any documents explaining why he received such an honor.

In 1941, James Limpe incurred the wrath of Japanese soldiers. “During the Japanese occupation, there was an order from General Macarthur [for distilleries] to dump all their stocks of alcohol before the Japanese arrived,” Limpe-Aw explains. “Since he complied, he was thrown in Fort Santiago.” As it turns out, James Limpe was the only liquor manufacturer who obeyed MacArthur’s orders.

His eldest son, Julius Limpe, was the next man to take the helm of the company. It was he who literally dreamed up the iconic White Castle commercials. While sleeping, he dreamt of a woman in a red bikini, riding a white horse with a white castle in the background, and the rest was history.

“He was more of a marketing man. He really pushed the products in a way that wasn’t done before,” says Limpe-Aw. “He spent a lot on TV advertisements. At that time not a lot of people were doing TV ads, but he had to foresight to do so. So whenever you turned on the TV, you’d see White Castle. That’s why it grew.”

The museum also houses Julius Limpe’s desk, along with some of his favorite belongings. “He liked collecting these things, like this looks like a piano, but it’s a phone,” Limpe-Aw says while pointing at his grandfather’s telephone. “This one is a notepad, but it looks like a phone. Novelty items. He used to give us things like bottle-shaped lighters.” 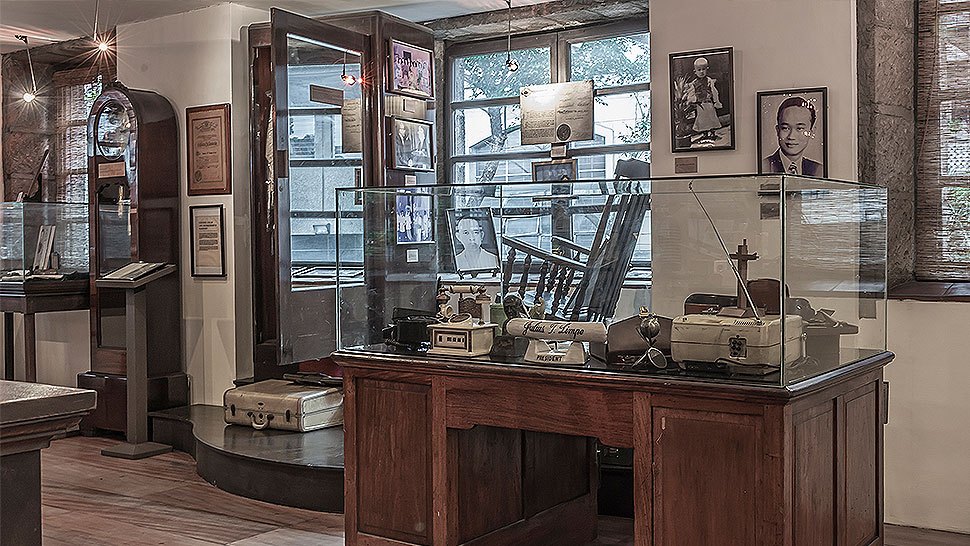 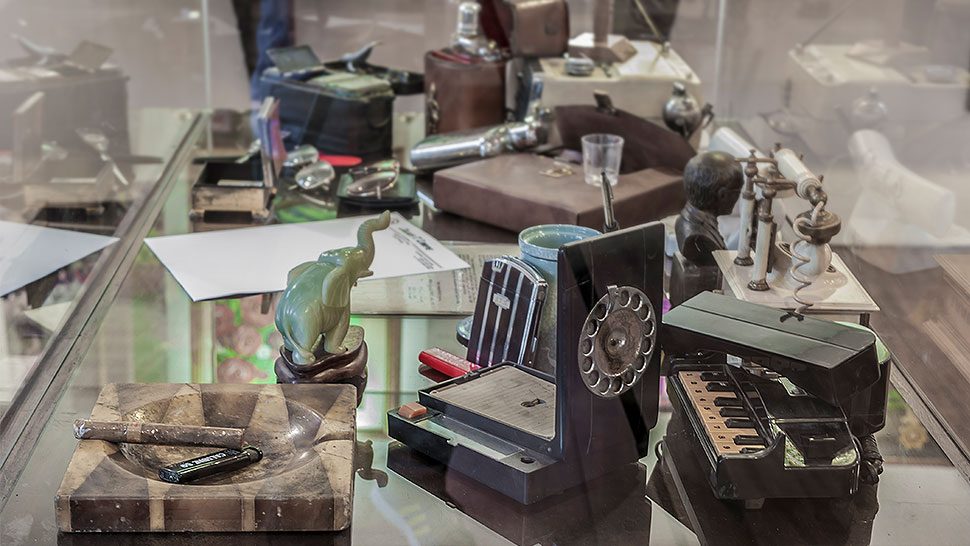 “He also had other passions. He was passionate about art and animals, but he didn’t pursue art until after he retired, then he became an avid painter,” Limpe-Aw adds.

If you’re fond of vintage items, you’ll have fun looking at the museum’s collection of old cameras, typewriters, and cash registers. For once, you’re allowed to touch the items on display—with care, of course. 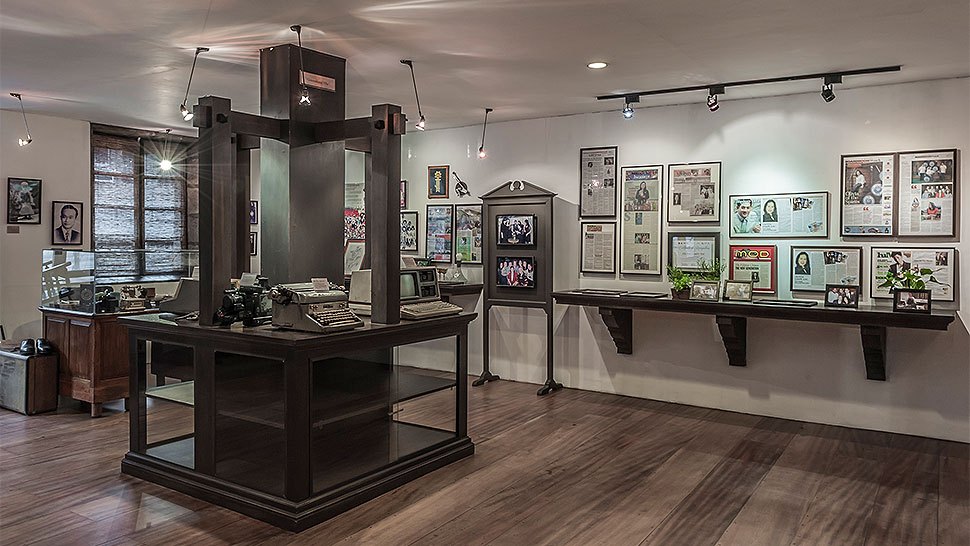 Needless to say, the museum wouldn’t be complete without showcasing the achievements of its current president, Olivia Limpe-Aw. Upon taking the reins of the company, she steered it through a labor crisis, then went on to produce the company’s line of unique Philippine craft spirits like Manille Liqueur de Calamansi. A wall lined with news clippings and awards stands testament to her many achievements.

Over 166 years, Destileria Limtuaco’s founders have created countless brands—some of which stood the test of time, some of which were shelved. The museum’s last exhibit shows the evolution of their brands over the years. You can even leaf through booklets to see how specific brands’ labels have changed over the decades. 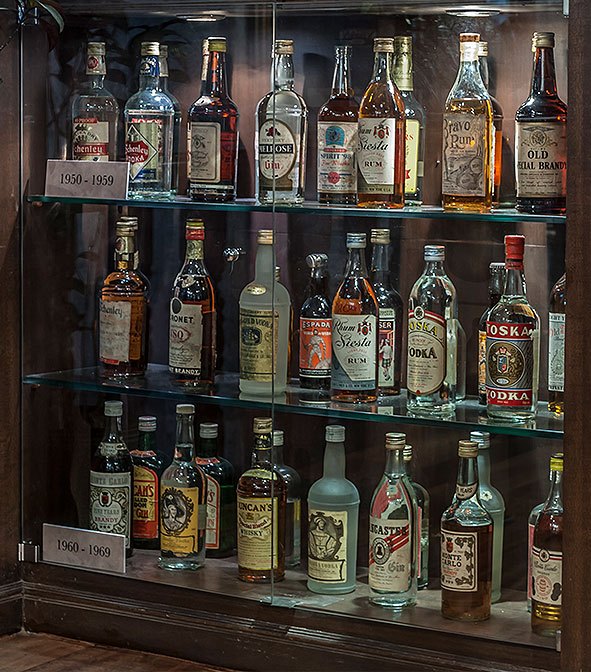 If soaking in all that history has made you thirsty, the museum has a bar area where visitors over eighteen years old can sample Destileria Limtuaco’s various spirits for P100. 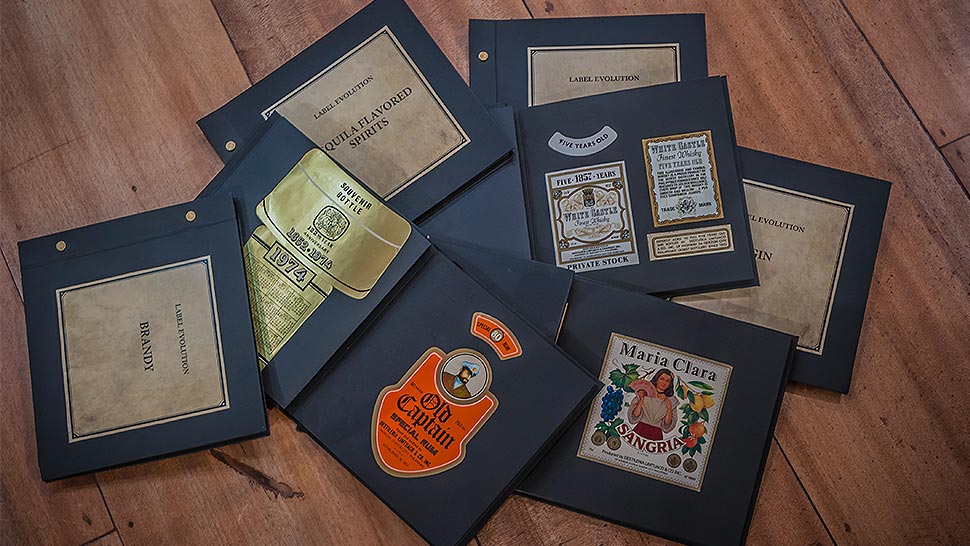 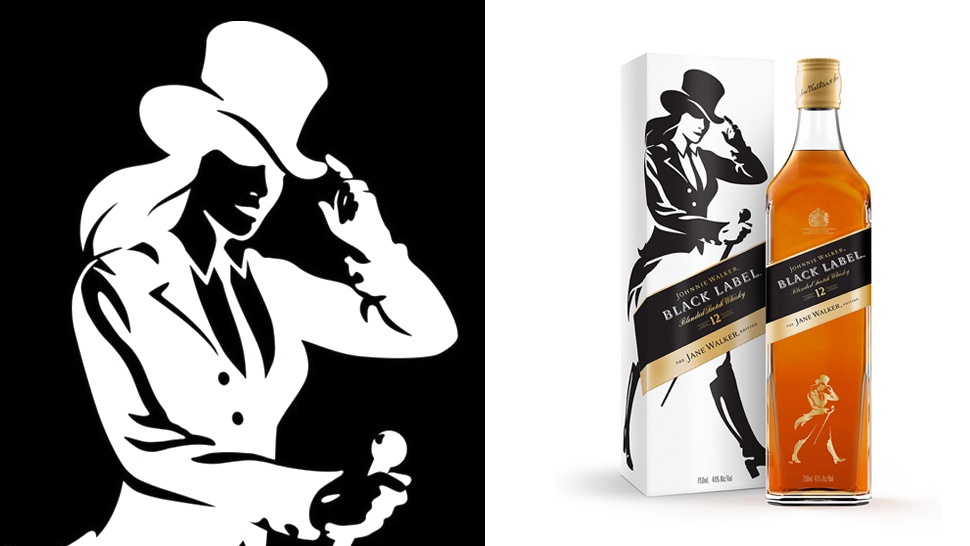