Also on the menu: burgetti and macapuno con hielo with cheese. 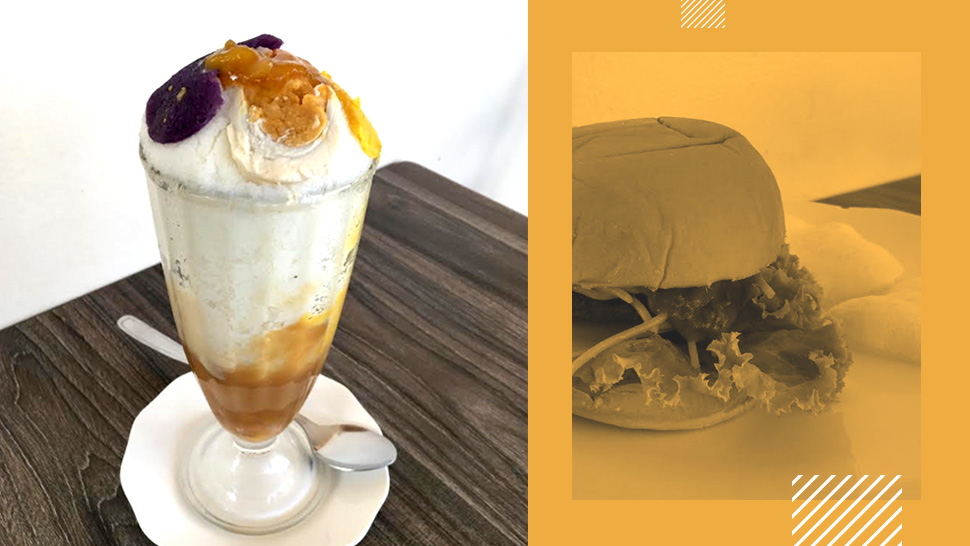 This story begins, as most things do nowadays, with a Facebook post. A friend of mine posted a culinary discovery: an otherwise unassuming halu-halo that's been violated with a salted egg. It was this abomination. The kind I had to try.

This was how I found myself in front of a dusty, lonely gas station in San Pedro, Laguna, beside an equally arid highway exit that could've been called “Oops I Made a Wrong Turn” or “F*ck, This Isn’t Sta. Rosa.” There was nothing to see except container trucks rumbling past, the occasional sprightly tricycle. It's easy to assume that I was at the wrong place except for the sign: Ben’s Halo-Halo.

While it flies in the face of good business sense to put your shop in such an desolate location, there was a healthy number of patrons in the middle of a weekday. It was beginning to look promising. I was greeted by a suspiciously chipper waitstaff at the counter and she enthusiastically offered their menu. Clearly she found joy in making people try strange things. She must have a good batting average to have such confidence, I thought.

Which was why my first glance at the menu was jarring. Front and center was a monstrosity called Burgetti, a purely Pinoy carb-on-carb...thing that called to mind childhood days of eating noodles with white rice. It was spaghetti with red sauce sandwiched inside a sorry-looking cheeseburger. On another page, the highlight was a Bacon Broccoli in White Sauce.

Who is Ben and what on earth is he thinking? I knew, though, I wasn’t going to get the respect of my peers if I didn’t have the cojones to try the Burgetti. I ordered the unholy freak of a sandwich, which arrived scarily quickly. Note, dear reader, that I consider myself a very adventurous eater. Salt and pepper tarantula? Sure, I ate that. Deep fried grubs? Done that in a heartbeat. Stewed calf brain? Pssh. But the thought of eating the horror on the plate in front of me filled with me with dread. 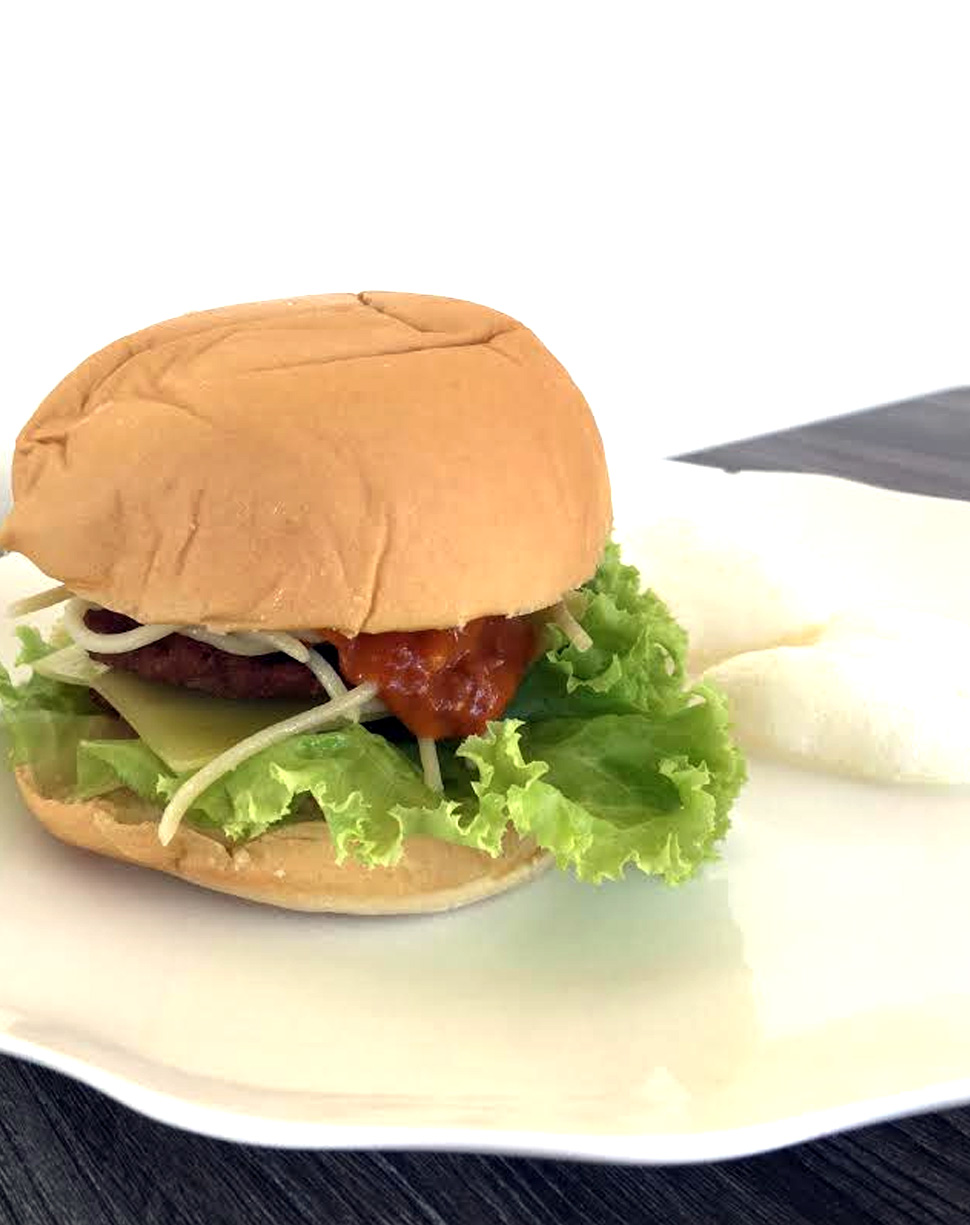 As I picked up the aforementioned atrocity, the spaghetti slipped out along with the rest of my dignity and self-worth and I gingerly tried to stuff as much as I could back inside the bun and took a bite. Let’s just say it tastes just as good as how you imagine it to be. I briefly considered wrapping up the rest of the said travesty and leaving it on the bed of my editor while she slept as a warning but I had halu-halo to try.

In an effort at redemption, I ordered what I came here for: The Salty Summer Halo-Halo with the aforementioned salted egg. It was strangely exciting. Halu-halo is probably one of those classic Filipino dishes that’s subject to modern experimentation with the easy addition of anything from cornflakes to gummy bears but rarely turns out well. 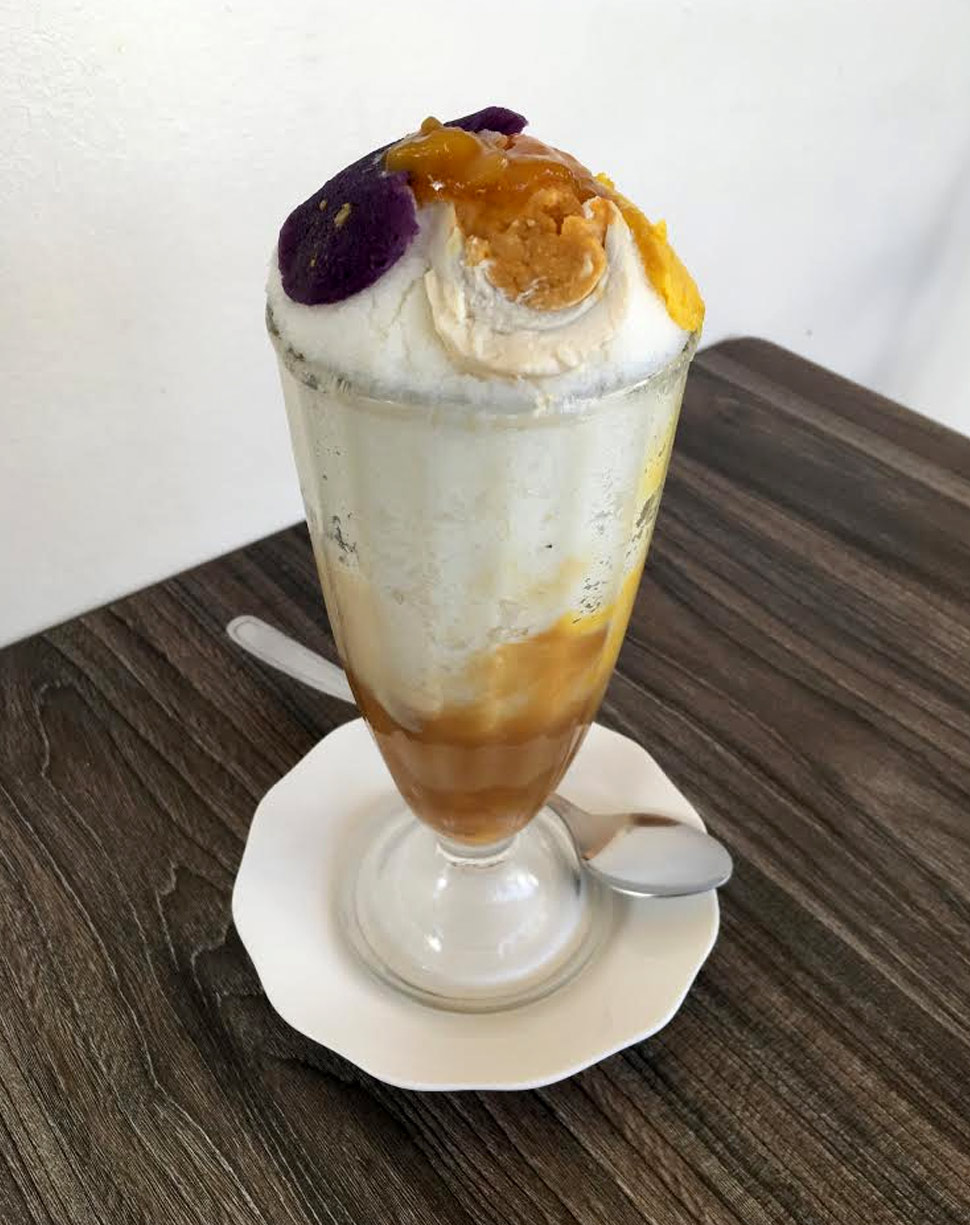 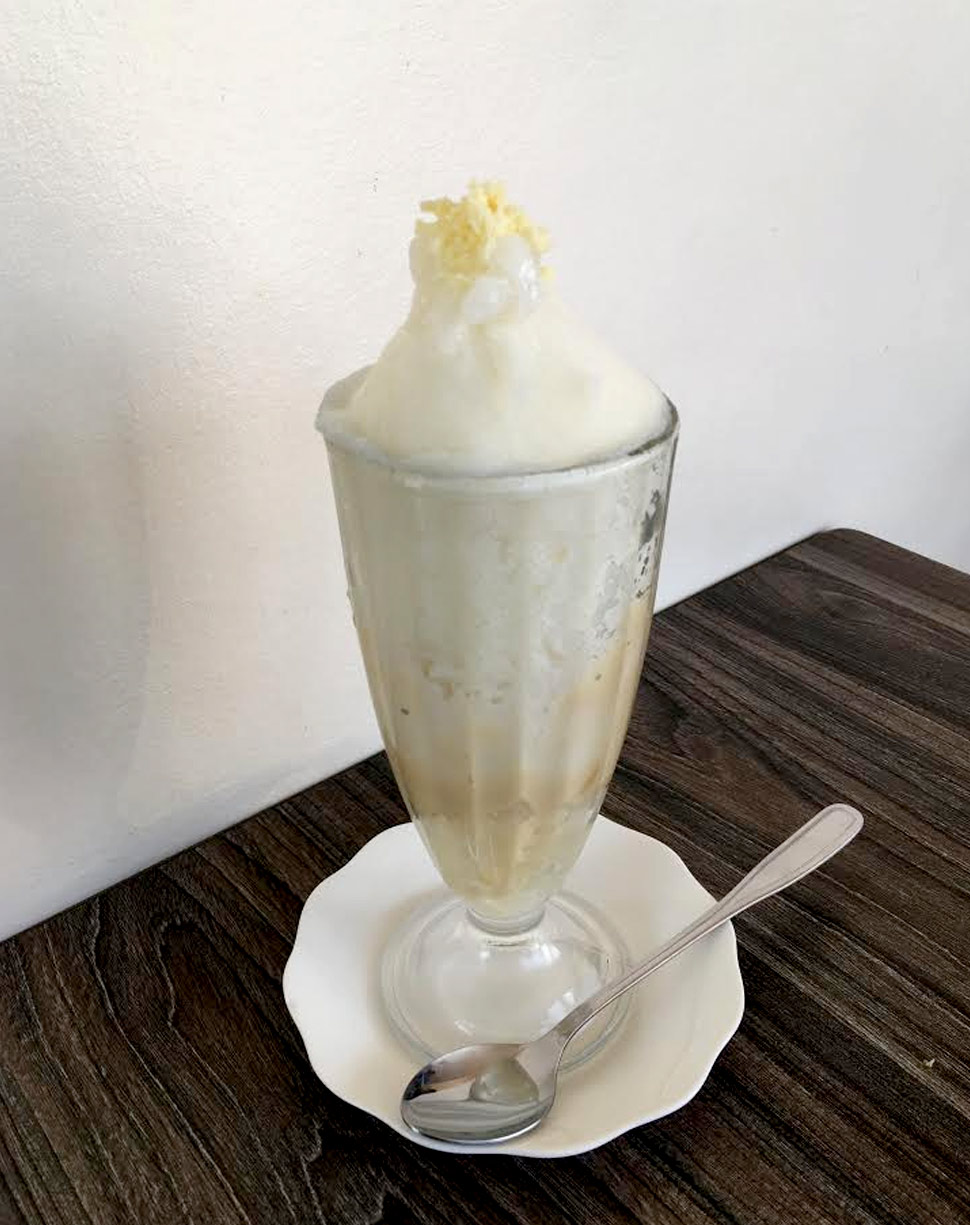 My order arrived promptly and I could immediately see that it was not your garden-variety dessert. It’s very different from the Digman-style or the one in fast food chains people are familiar with: packed with a riot of ingredients and saturated with color. For a time, the halu-halo game was dominated by a race to cram as many ingredients as one could in a glass. “Sangdosenang sangkap” exclaimed one chain that was found in food courts of the past. Thankfully, the halu-halo in Pampanga, most notably, that of Razon’s, showed us that fewer could actually be better so long as each ingredient was carefully made and complemented each other well. Ben’s halo-halo falls along a similar vein but with slightly more additions. Like the halu-halo in Pampanga, there is restraint: it only predominantly had sweetened banana, macapuno, and leche flan. The few additions were a smattering of candied jackfruit, a strip of ube halaya, and a slice of salted egg.

I chipped at the sides until I was able to mix everything together into a creamy slurry with the salted egg fully swirled in. There will be no avoiding it. This might be a good time to interject that I despise salted eggs. I avoid eating anything that has them and would carefully pick out the crimes of nature from my bibingka. So when salted eggs became all the rage in the past couple of years, appearing everywhere from potato chips to chicharon to fried chicken coating, I just shrugged and went along my merry way. Hence this halu-halo flew in the face of everything I believed was right in the world. After the slightest hesitation, I dug in.

It was delicious. Like the Kapampangan halu-halo, it’s predominantly creamy with just the right amount of sweetness as delivered by the finely shaved ice, milk, soft bananas, and leche flan. But the salted egg turned out to be the revelation, delivering just a slight kick of salt to accentuate the other ingredients. As I ate, I was chasing after the mingling pleasures of salty and sweet, diving into one another alternately until in no time at all, I finished my glass. The only thing that was not up to snuff was the forgettable slice of ube.

Clearly whoever Ben was, he’s a culinary hero, dancing on the knife’s edge and pushing gastronomic tradition. Or he’s just high. Maybe a little bit of both.

I needed more so I tried another halo-halo on the menu: The Macapuno Con Hielo. The creamy macapuno was excellent in the last one I had so I felt that I couldn’t go wrong. It came with a sprinkling of grated cheese on top. It was satisfying too but was one-note to the previous one. I found myself making plans for my coming back to have the one with salted egg again. I was obviously hooked.

Maybe next time, when I hate myself, I’ll try yet another one of their stranger offerings, the imaginatively named Spicy Winter Halo-Halo which has siling labuyo on top. At the very least, it looks like it will be entertaining. Of course it could be as terrible as spaghetti stuffed with abandon into a sorry burger. But as with the salted egg on a cold, creamy glass of deliciousness, I’ll be happy to be proven wrong.

About The Author
Nowie Potenciano
View Other Articles From Nowie
Get The Latest Updates From Esquire!
Subscribe to our newsletter!
Latest Feed
Load More Articles
Esquire Money 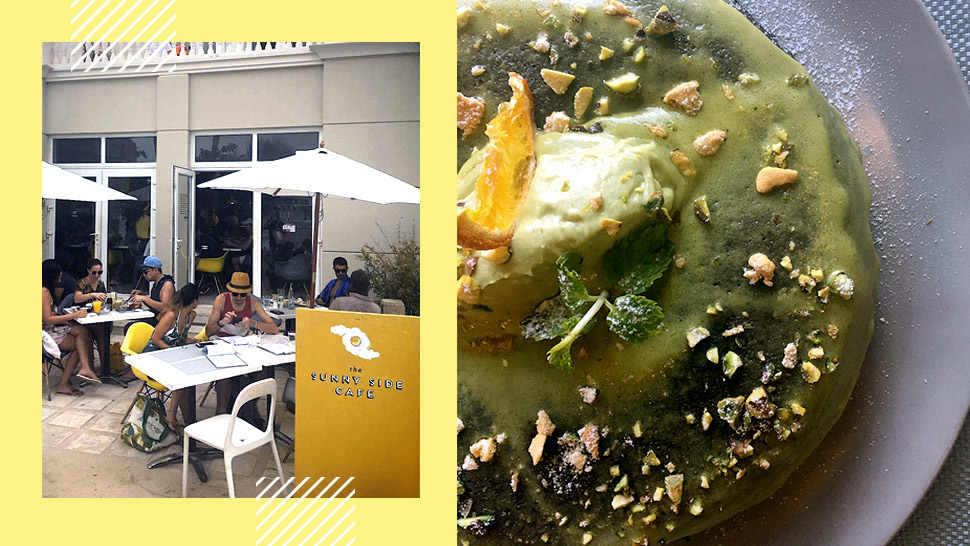 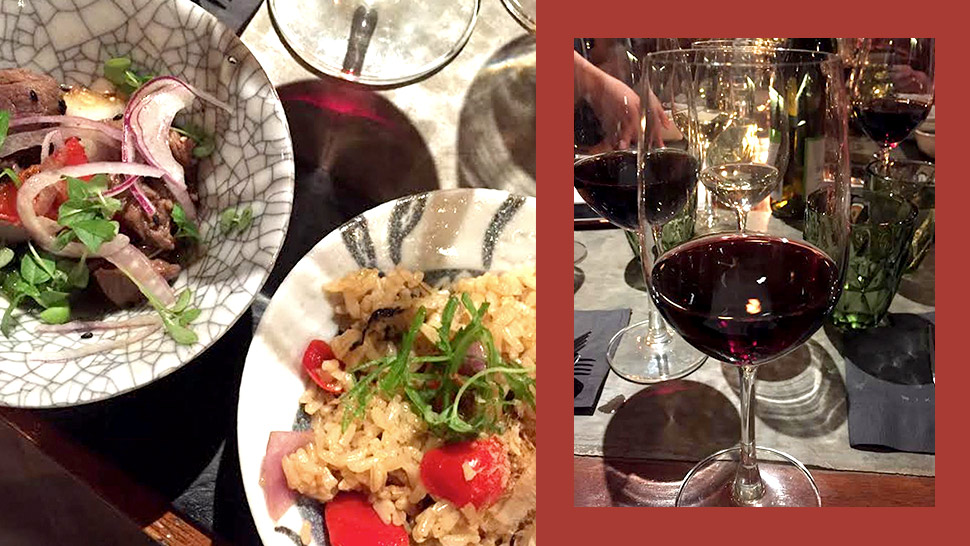