Papaitan and Other Beerhouse Classics Find an Unlikely Home in Greenbelt 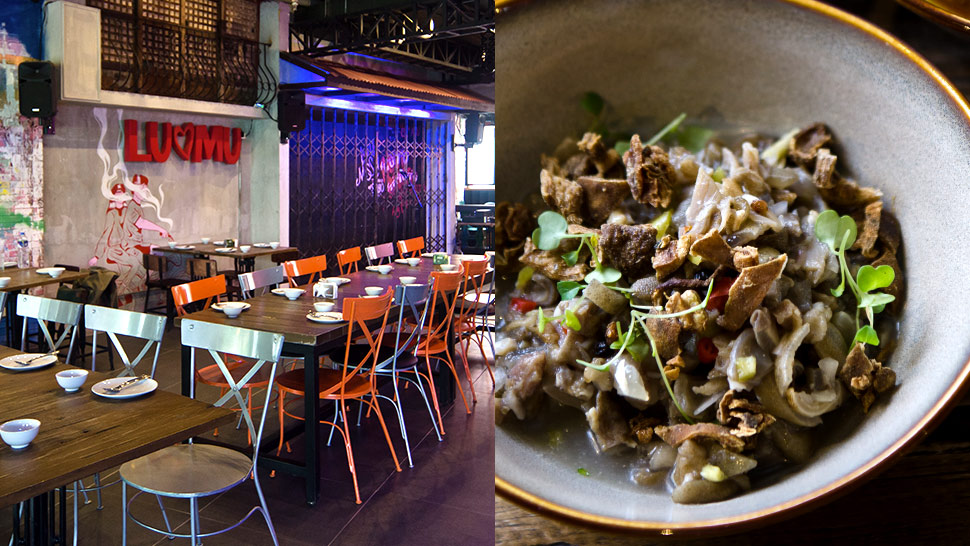 We hear our fathers and uncles talk about it—the Filipino man’s macho exploits with their buddies in “beerhouses.” Back in the day, it was a boy’s right of passage to join the older men in the family for beers and pulutan in one of these establishments—often dark and dank, floors littered with peanut casings and sticky from what is hopefully just spilled beer. The beerhouse is long gone, except for some straggling little places in the suburbs, replaced by less grimy watering holes.

For Gen-Xer Chef Luigi Muhlach, this haven for baby boomers fascinated him so much that he and his partners (led by Excello Resturant Management Group’s Raymond Magdaluyo) built a concept inspired by the side-street beerhouse and called it Lumu (after the baby-faced chef, and a shortcut for “Love you, miss you”). It's for what Muhlach calls “kantong inuman.” The interiors transport diners to seedy alleys, walls blanketed by faux posters advertising soap and old movies. Muhlach’s parents, for those who just crawled out from under a rock, are Filipino showbiz icons Aga Muhlach and Janice de Belen. You might spot the poster of the elder Muhlach’s first movie “Miguelito” amongst the feigned clutter. 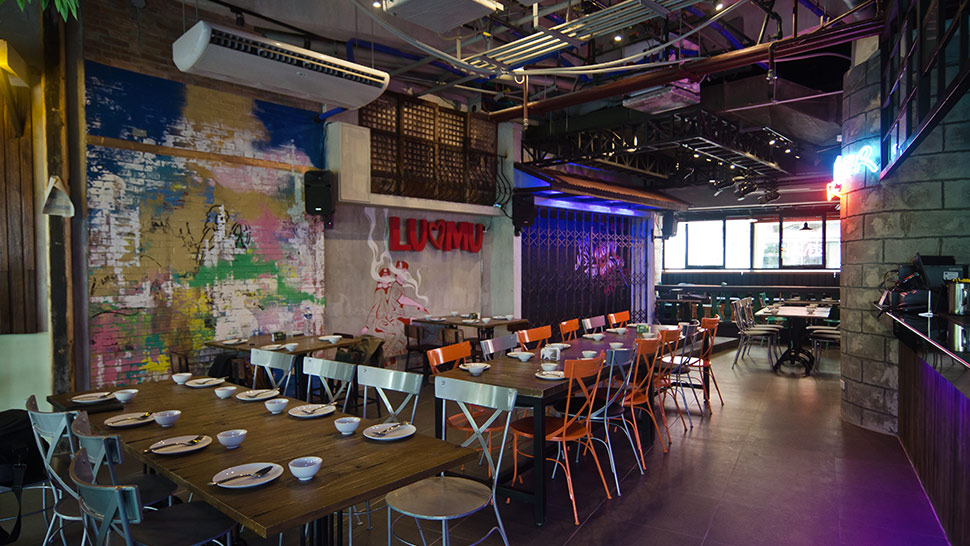 Wrought-iron windows hover over the dining room and what looks like your typical kanto scene wherein everyday Filipino men like to congregate for drinks, tawdry jokes, and perhaps some tipsy singing before calling it a night. Just the typical after hours activity of the working Filipino man before the age of video games and Netflix. It’s nostalgic for those who were actually there, yet made gritty and cool to be interesting to those who weren’t. Besides, “ang dami nang gastropubs, 'di ba?” Muhlach points out.

The retro ambience is strongly supported by a food and drinks menu that is classic but not without Muhlach’s bold and creative revisions. He admits to being the rebellious type anyway, snickering at the fact that his six-month course took him almost four years to finish. But, after acting as consultant for a couple of restaurants, the chef is understandably eager to put his stamp on the first eatery he can truly call his own. 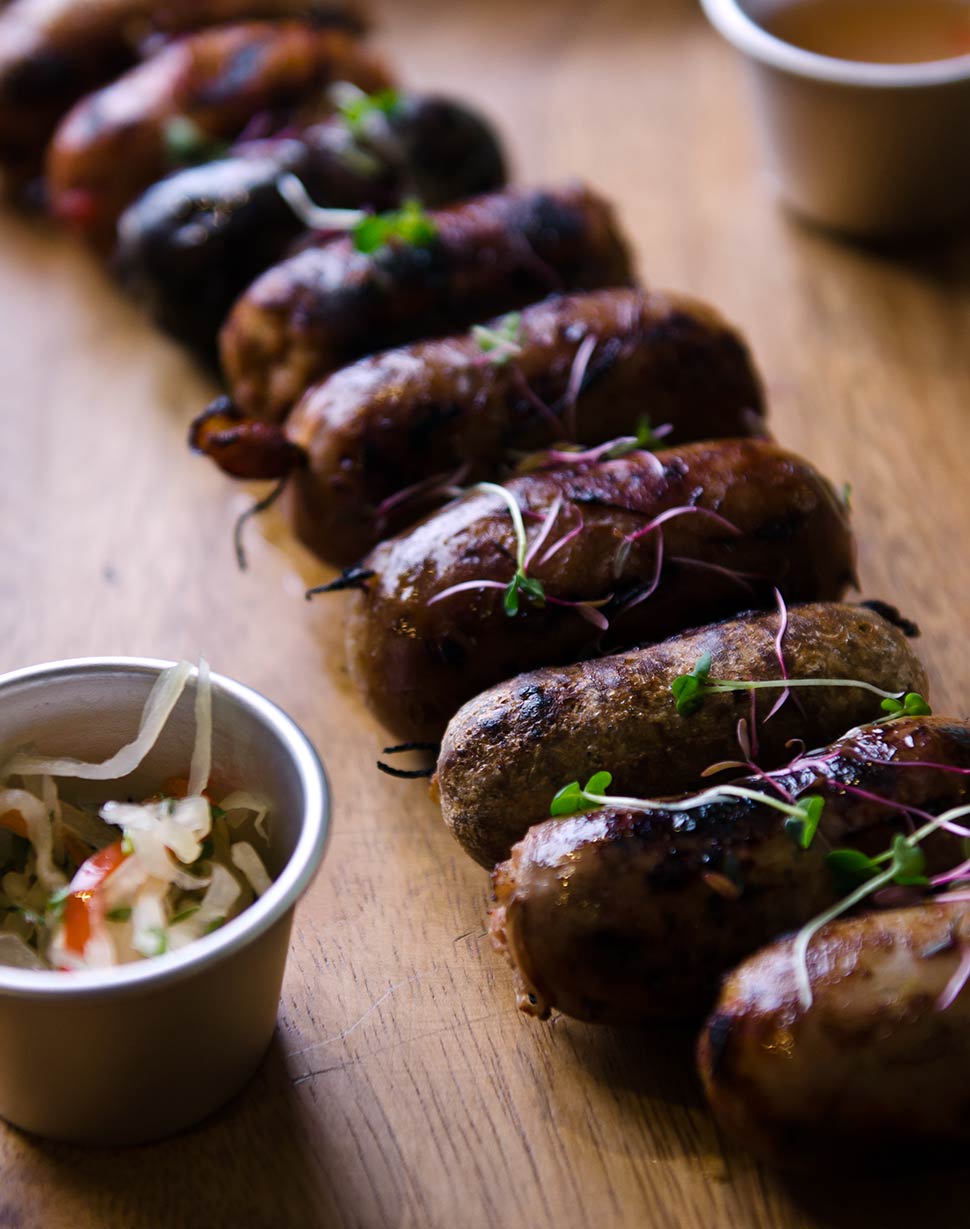 Mulach painstakingly makes his own sausages in-house, and his bangers are not merely glorified longganisas. They are lean, which make them munchable on their own, and with flavors unique to Lumu. The Bicol Express and Sisig variants are piquant favorites, while the kalderetang kambing with cheese and the dinuguan are actually more endearing than one would imagine.

Managing partner Raffy Zamora points out Muhlach’s propensity to play around and he does this so well with pulutan favorite chicharon bulaklak. He puts it on a stick, glazes it, then briefly grills it for flavor, and it’s a (pleasantly) surprising turn on the perennial bar chow. It also shows up in his version of tokwa’t baboy, but using silken tofu. Like miniature agedashi tofu, it is cubed, lightly breaded, and fried golden. The sauce, instead of the usual suka/toyo mix, is a sweet and tangy ponzu which cuts through the richness of the chicharon bulaklak effortlessly. 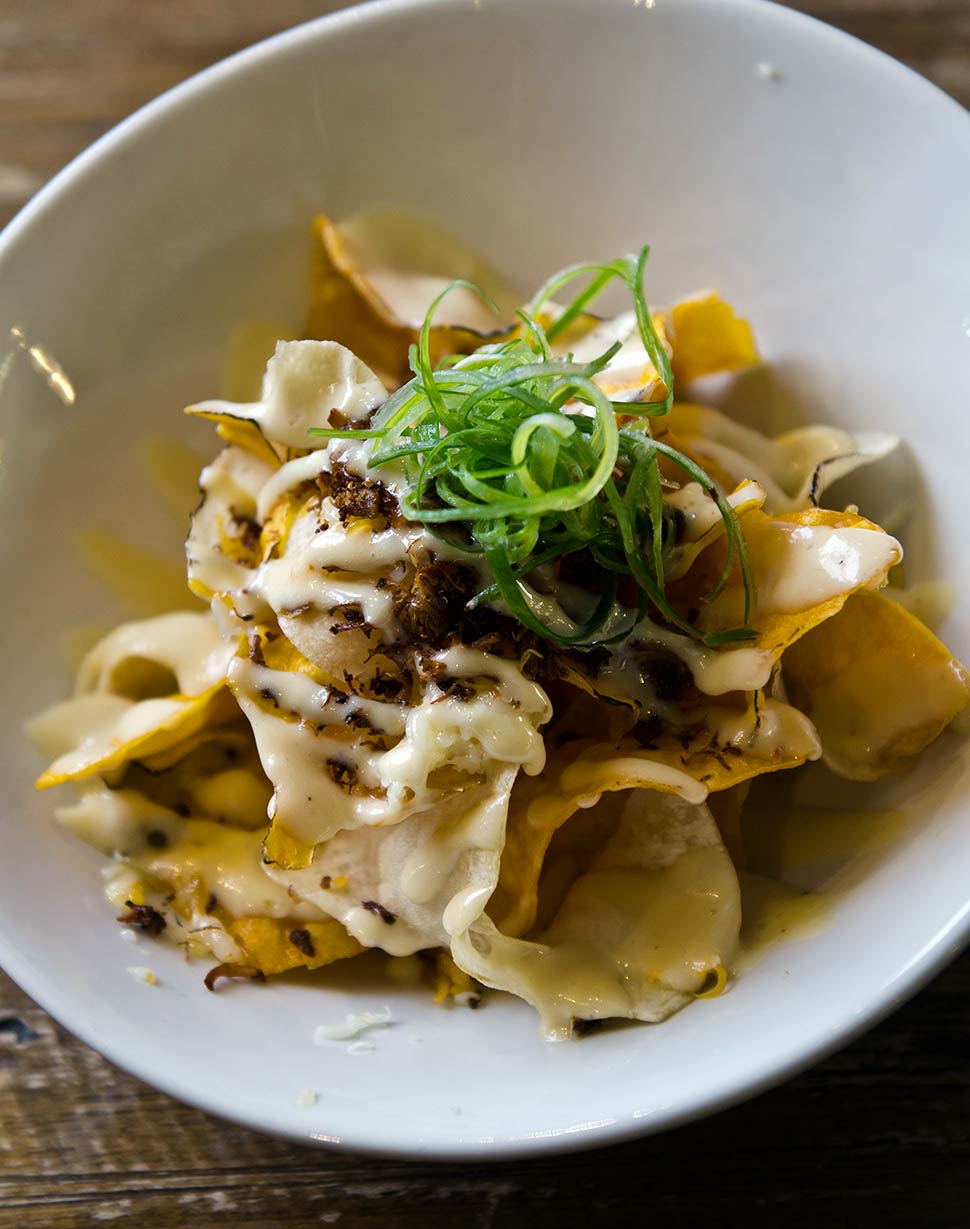 Mulhlach keeps the concept decidedly legit by including goat offerings—a nod to the kambingan, which served the baby boomer’s recovery food of choice, papaitan. The goat offal stew is cooked in the animal’s bile and that is a flavor which might be easier to hate then love. However, this is one dish the chef preferred to not fool around with, acknowledging that those who love it will prefer it in all it’s gritty, gamey, smelly glory. Those unfamiliar can slowly ease their way into goat territory with the more popular flavors of adobo ribs or a Penang-style curry.

While the unique dishes will surely pique diners’ interest, Muhlach shows that his skills are not limited to gimmicky theatrics. He makes a mean oyster sisig like the best of them—clean tasting and briny inside, crunchy and saucy on the outside. The tomahawk bagnet is not all beauty without substance—the crackling on the skin partnered with juicy meat shows a firm grasp on technique. Zamora is quick to point out that Muhlach’s signature dish might just be his bistek, a dish he includes in almost every restaurant menu he has made. The Lumu version is a definite must-try, that sour kick balanced with some sweetness making that gravy long for hot rice. 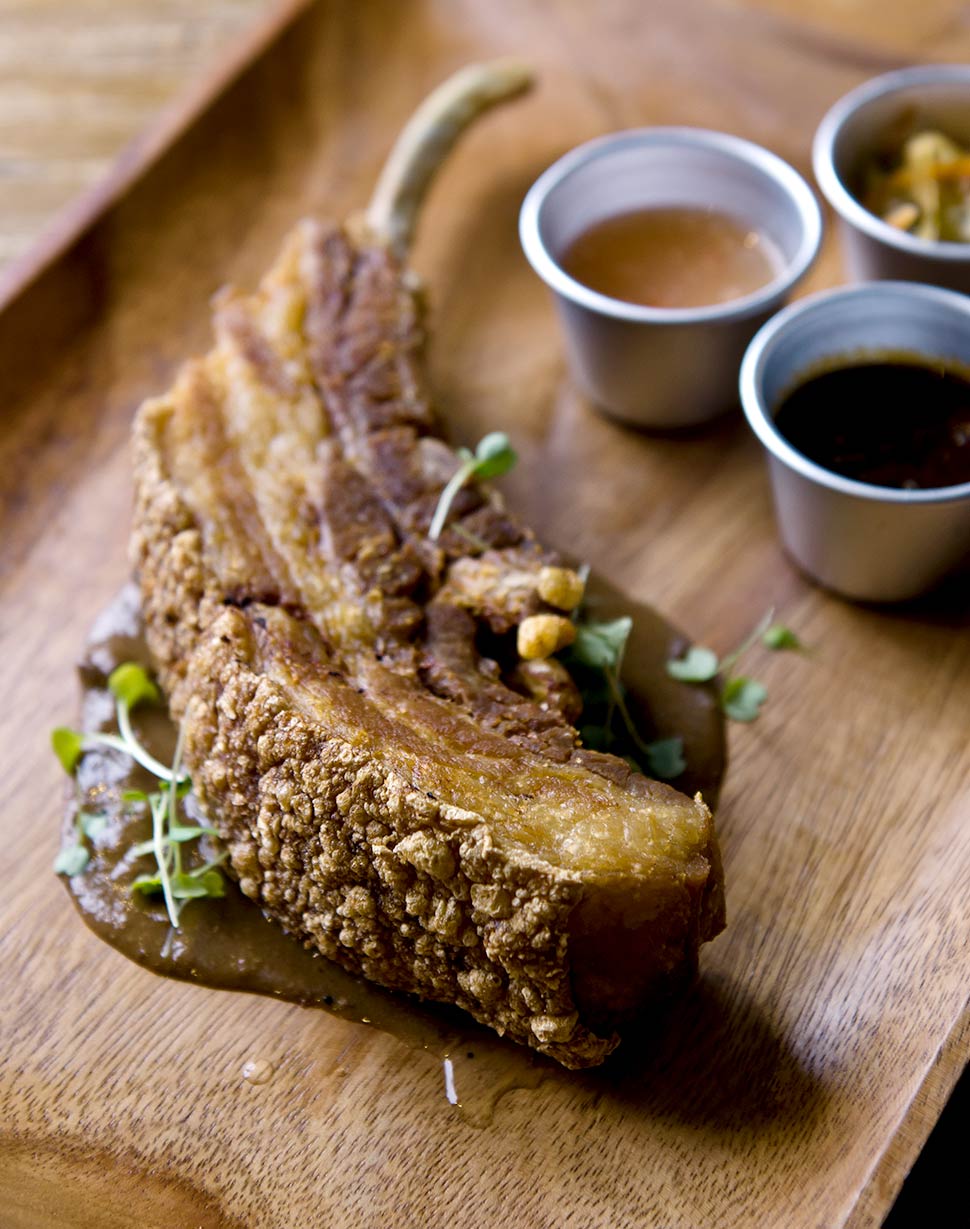 A pastillas cheesecake is a strong ending, but not having a cocktail in this place is almost sad. The frozen weng-weng is the obvious nostalgic choice, even if a hangover is an accepted inevitability. If you need help getting into that kanto vibe, the San Miguel Beer Grandes might help. Get hammered on a budget with a pitcher of their gin pomelo, although the pearl julep (Absolut Kurant, mango rum, elderflower glitter syrup, mint, lime, ginger beer) is a fancy ladies' drink even macho men might willingly take a swig from.

Lumu Beerhouse and Filipino Kitchen demonstrates how good it is when a concept is properly executed. Muhlach is a natural in the kitchen, serving up well-priced, clever recipes that are easy to like. Drinks are not kanto-cheap, but then you’re eating papaitan in Greenbelt, for Pete’s sake. By the looks of it, there will be singing as well indicated by the small stage in the middle of the restaurant. So, yes, it seems they thought of everything. 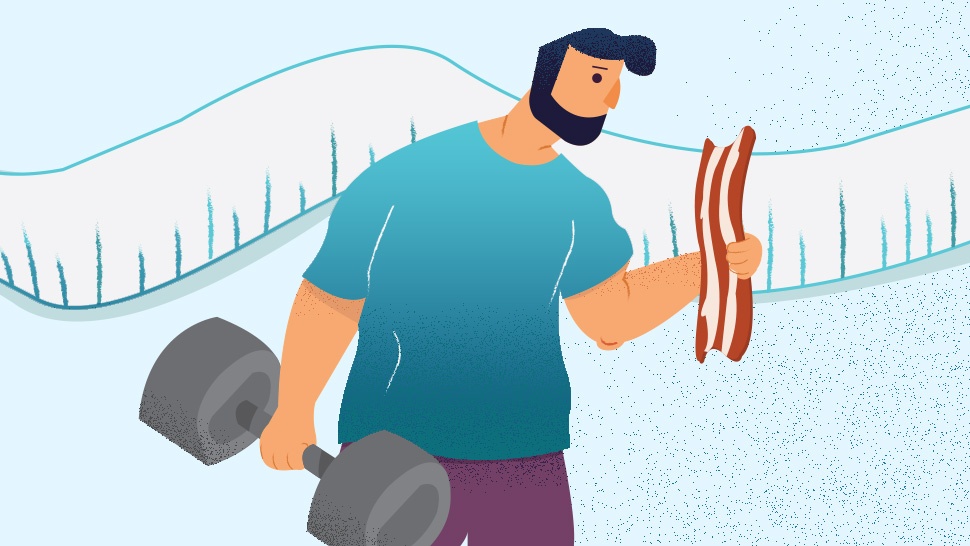 A Totally Practical Guide To Diving Into That Keto Rabbithole 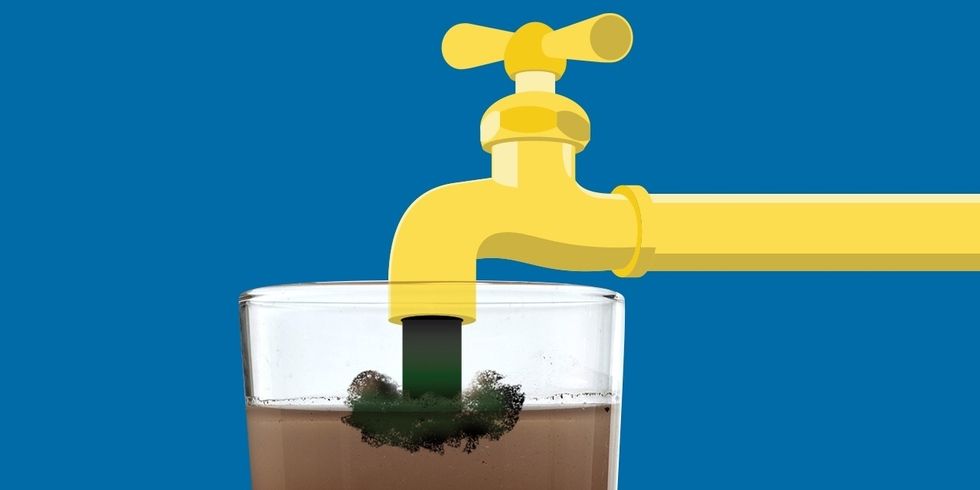