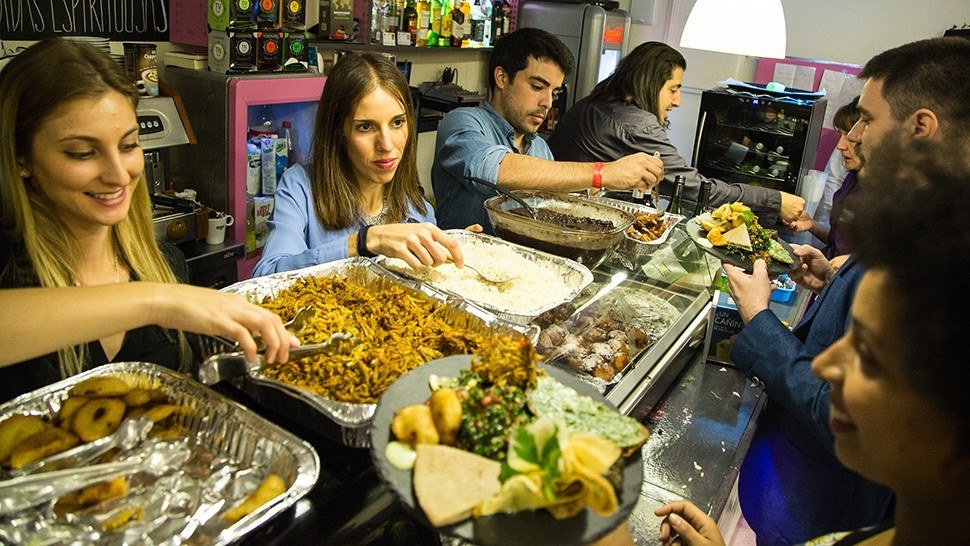 His name was Ali, a Syrian refugee from the city of Hama in west-central Syria.

Soft-spoken and disarmingly polite, Ali was my unflappable tour guide for the day with a  mission to navigate me through a fascinating and exotic realm I had never visited before—the Amana halal supermarket in the Ventas neighborhood of Madrid.

As soon as Ali opened the glass doors to usher me inside, I realized I might as well have been an alien visiting from another planet, seeing ingredients so far off from my usual culinary orbit: green-colored frike rice, stuffed grape leaves, bottles of aromatic rose water, pickled turnips in neon purple, rows upon rows of tahini or ground sesame seeds—enough to make hummus for the next 10 years—spherical labneh yogurt balls floating in orange liquid, spices in the form of tiny crystals and powders that would have left any spice-hunting Conquistador light-headed.

I walked through the aisles snapping photos of the extra-terrestrial food stuff to offer to the gods of Instagram. My companion was hopping about from shelf to shelf, pride written in all caps on his face.

“Choose,” he said. “I invite you.” So I selected this kryptonite-colored kiwi concoction and took a cautious swig.

”Wow!” I said of the delicious pulpy juice. That brought a bright, toothy smile to Ali’s face.

“If you ever visited Syria,” he said, “you’d never want to go back to Europe.” 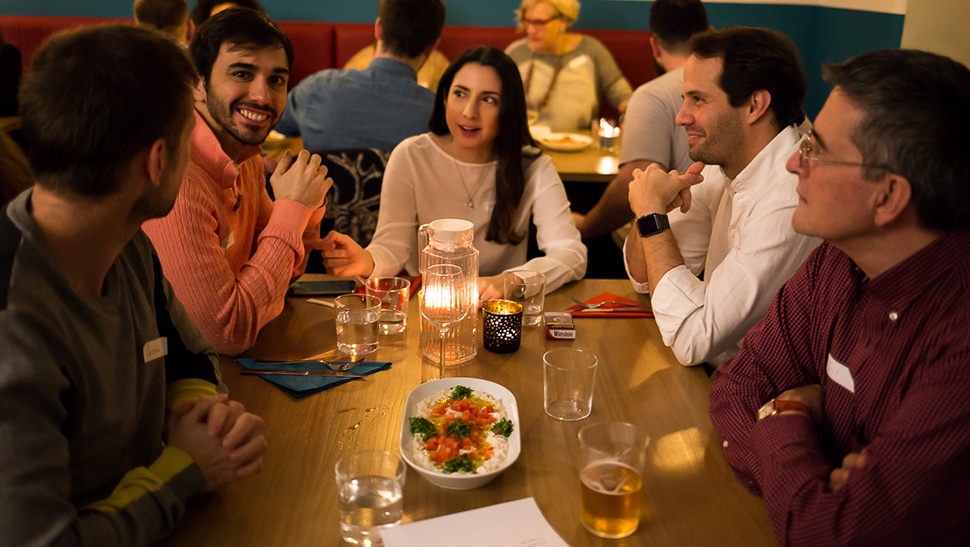 A recent Chefugee in February 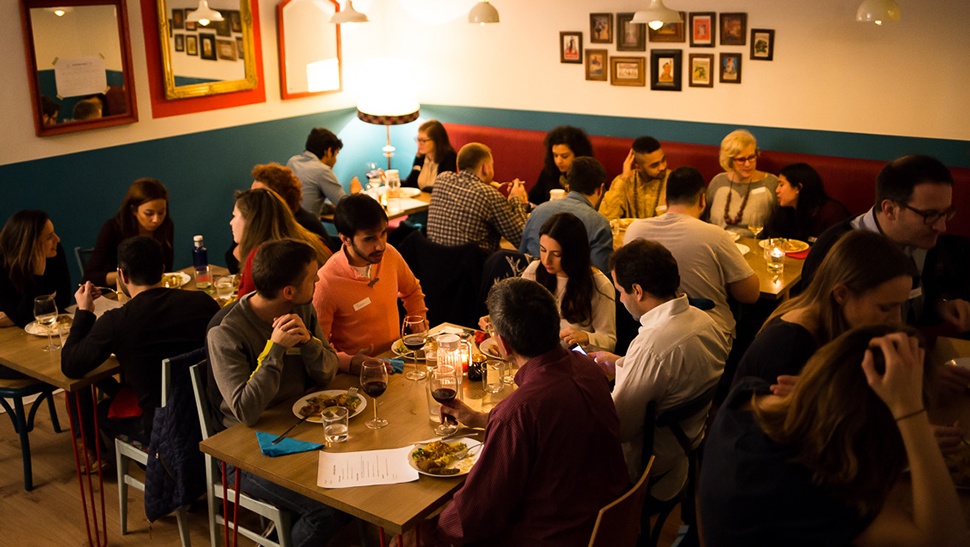 Our funky food expedition was not just about channeling Anthony Bourdain in his moveable feast. We were grocery shopping for an upcoming pop-up dinner featuring traditional Syrian cuisine. Ali’s wife, Wesal, was the the appointed kitchen commander tasked to feed 40 guests that night.

Carrying bags stuffed with groceries, we trooped back to Ali’s apartment to find Wesal welcoming us as she was breastfeeding her month-old baby boy. Back in Syria, Wesal worked as a licensed phlebotomist in a medical laboratory.

She shared that the tipping point for leaving Syria was her children. “It was no longer possible to work and live there, especially for the kids’ studies. My son had become so frightened and scared from the sound of explosions and bullets that it affected him a lot psychologically.”

As we talked about the upcoming dinner, I asked her if she was okay with cooking for 40 people that Saturday. She and Ali both laughed and showed me photos of a table with rows of plates. “I cooked for three hundred people on my wedding day!”

Instead of begging people to give refugees a chance, why not turn the tables around, so to speak, and let clients come to the refugees?

The Syrian pop-up dinner was the latest installment of a year-old culinary project called Chefugee, which engages refugee cooks from all over the world to share their gastronomic heritage through supper clubs and cooking classes around Madrid.

Project Chefugee first took root in April 2016, albeit after a series of frustrated attempts to find employment for talented refugee cooks in Madrid’s already bloated restaurant scene. As a volunteer for a grassroots organization called Madrid for Refugees (MFR), I was in charge of helping refugees find decent jobs and earning opportunities to ease their integration in their adopted city.

Seeing that many of them were either professional chefs or had clocked hundreds of hours working in kitchens back in their home countries, I started distributing their CVs to various restaurants with job openings. Many times, I was greeted with bewildered stares and flat out rejections. One restaurant owner even told me sharply, “don’t ever come back again with refugee CVs!”

In retrospect, I was really naive to think that the “chefugees” would be welcomed right through the kitchen doors. At that time, debate was raging among the European countries about whether the thousands of refugees crossing the European Union borders posed a threat to the region’s security. Layer that with Spain’s steep unemployment rates, and it was no wonder I was met with frosty reactions.

I thought, if only people just tried their food! Then it hit me—instead of begging people to give refugees a chance, why not turn the tables around, so to speak, and let clients come to the refugees? 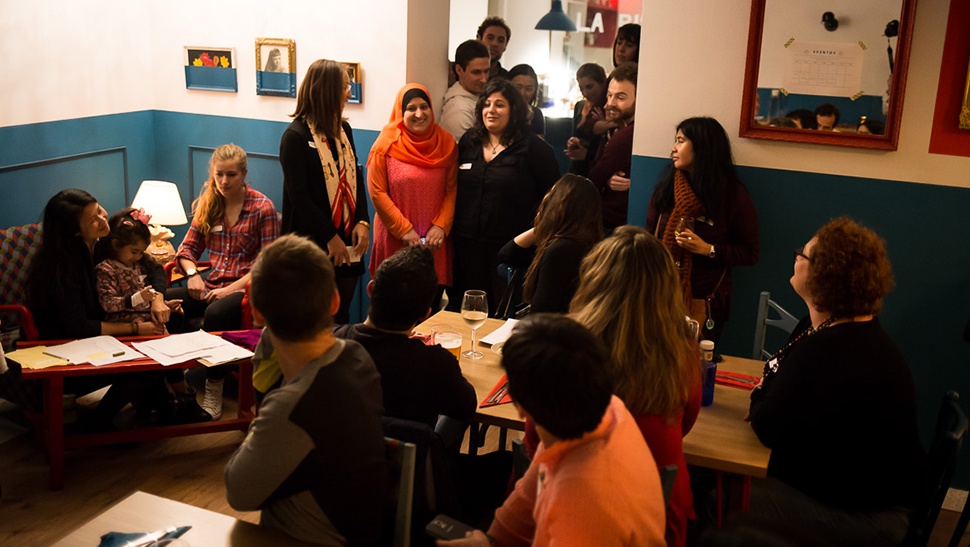 With Wesal and Malak the translator

Listening in to the Chefugee crowd was like dining in a restaurant at the Tower of Babel. Amidst the mixed timbres and rhotic consonants, there was an unmistakeable harmony radiating from a universal language.

The Restaurant at the Tower of Babel

What started out in the Spring of 2016 as a private dinner among close friends soon evolved, as the seasons passed, into a popular dining experience featuring cuisine from countries that we may never get to visit in our lifetimes, places like Syria, Ukraine, Palestine, and Iraq. What I didn’t expect was that tickets to the underground dinners would sell out within days of their announcement.

One common facet that Chefugee dinners shared was its multicultural nature—guests were not just Spaniards, but expats from all corners of the globe. Listening in to the Chefugee crowd was like dining in a restaurant at the Tower of Babel. Amidst the mixed timbres and rhotic consonants, there was an unmistakeable harmony radiating from a universal language—the language of food.

“There is cuisine beyond shawarma and hummus from the Middle Eastern countries!” observed one guest named Luis Grande, the founder of a culinary start up called SoEasytoCook.com. “Chefugee is not a normal dinner, not just a gastronomic event. You understand that food is more than an icebreaker that allows people to let go and be able to delve into any topic.”

Nina Thurau, a travel blogger who had tried Ukrainian cuisine for the first time, shared, “As a traveler, I enjoy hearing other people’s stories and personal experiences. In spite of the tragedies going on in certain parts of the world, being able to come together with people we may not meet under normal circumstances and have an opportunity to dialogue with made me realize that these Chefugee dinners have so many facets to them.” 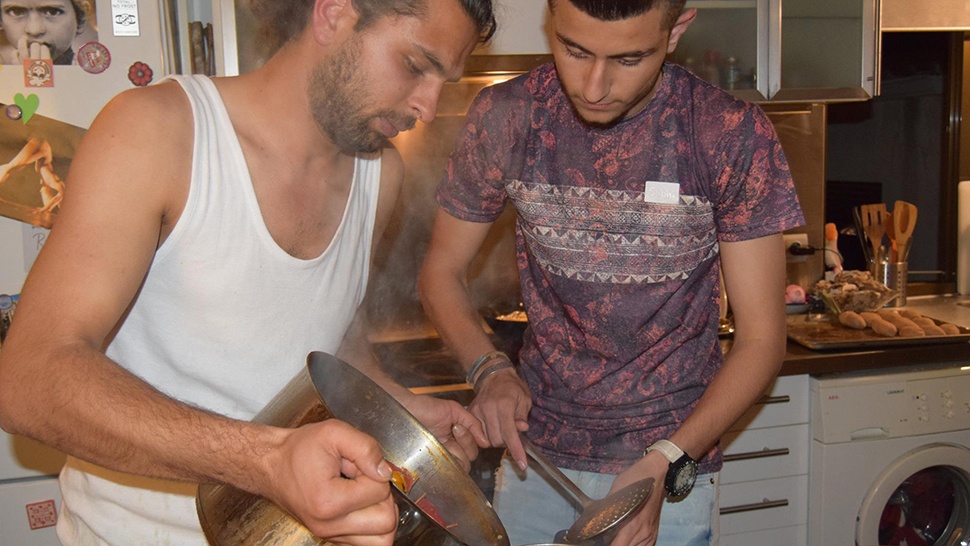 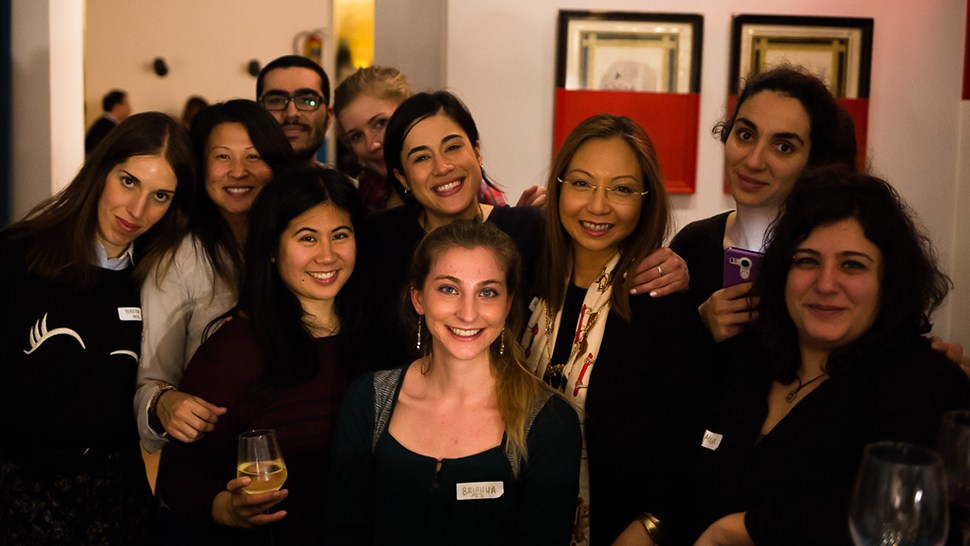 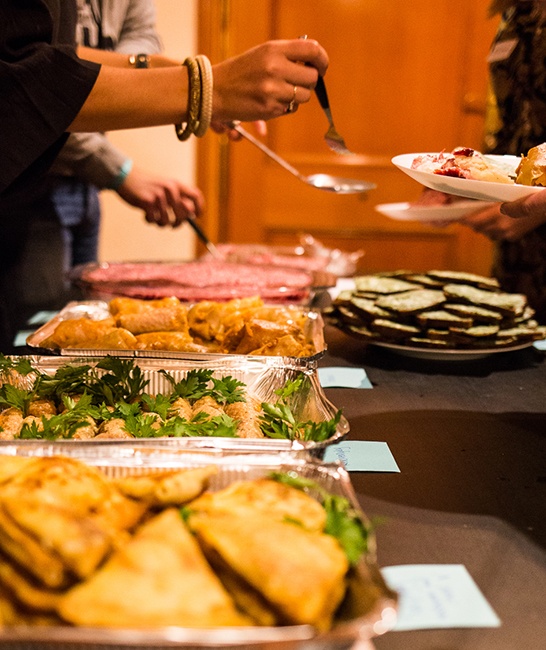 A moment from the Ukraine Chefugee

Cut to a wintry Saturday night in February 2017, the night of Chefugee Syria.

The scent of cardamoms wafted through the kitchen doors and into the dining area of our host restaurant, La Piscine Café. Animated guests were sipping Bordeaux as they examined the dinner menu: a traditional three-course Syrian meal featuring wonderfully strange-sounding fare as Muttabal, an eggplant, yogurt and garlic dip, Qras kibbeh, croquettes made of bulgur wheat and stuffed with cooked minced beef, sautéed pine nuts and Mid-Eastern spices, and Shaabiyat, phyllo dough parcels stuffed with clotted “ashta” cream.

It was my cue to introduce our celebrity chef for the night. 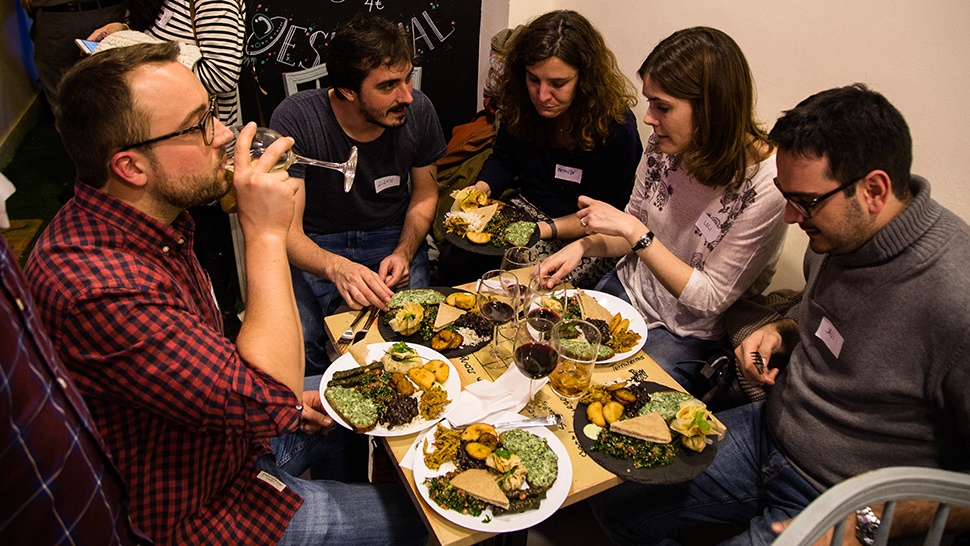 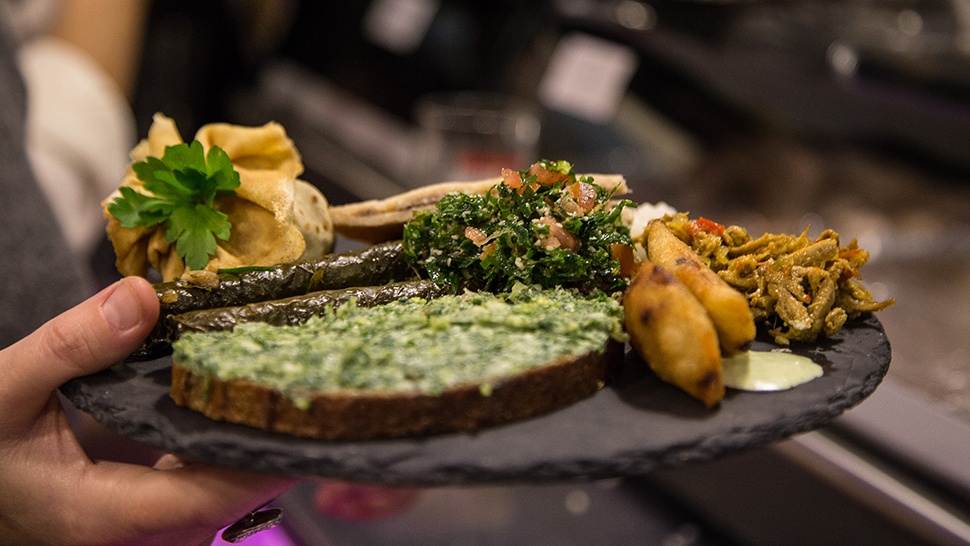 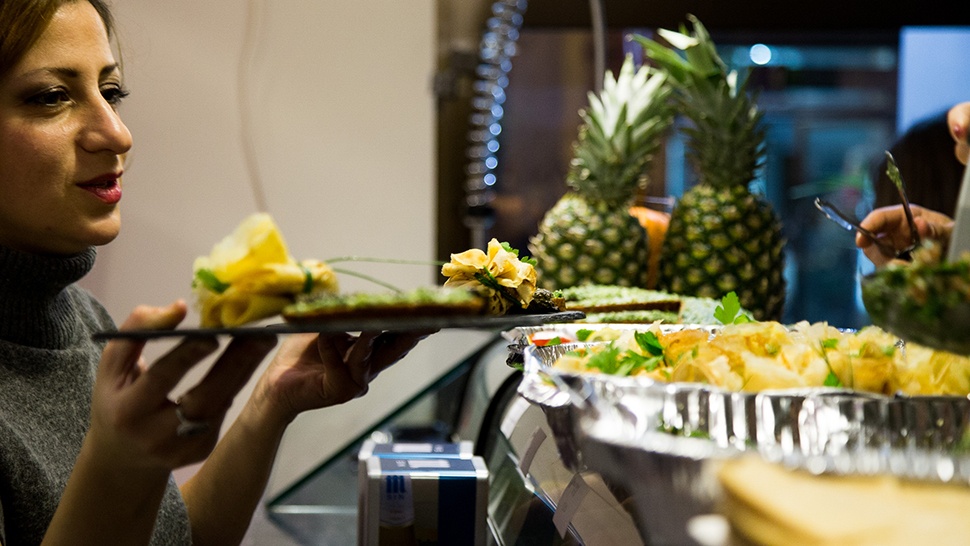 “Hello, my name is Wesal, and I’m a mother of four children,” she said. “I arrived in Madrid two years ago. I wish I came here as a tourist,” she joked, and everyone laughed and gave her a warm applause.

As the first plates started being served, I imagined for one shining moment that the world was bathed in peace. And I hoped that one refugee was a little less homesick, even just for one night.

About The Author
Natalia Diaz
View Other Articles From Natalia
Get The Latest Updates From Esquire!
Subscribe to our newsletter!
Latest Feed
Load More Articles
Esquire Money 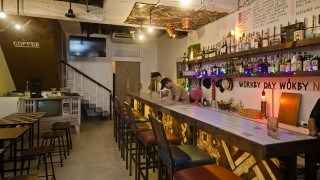 Finally, a proper rice bowl to cure your Poblacion hangover 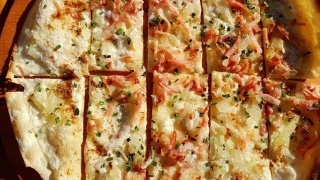