Crispy pata has come a long way from an attempt to feed a gang with an ignored ingredient, to a staple in Philippine cuisine.

There doesn’t seem anything particularly noble about a crispy pata. Rather than something knightly or gentlemanly, the thought of crispy pata evokes visions of primeval gorging—using bare hands, tearing skin and meat straight off the bone, oblivious of manners and with the single minded intention of wolfing down more.

Filipinos cannot claim to be the first to savor pork knuckles. Germans have always had their famous Eisbein (ice leg) or a boiled pickled pork knuckle. In the past few decades, the Germans have been also serving a baked knuckle with a crisp skin.

The popular crispy pata origin story is that a young son of a restaurant owner was castigated for overfeeding his friends, and was only allowed by his mother to continue to feed them discarded pork knuckles. Necessity being the mother of invention, Mr. Rod Ongpauco invented crispy pata by deep-frying the knuckle after a prolonged tenderizing simmer. The result was a revelation, a crispy thin skin that encased a sticky, gelatinous, succulent, tender interior of fat and meat. An alternative story has Ongpauco’s mother, Mama Chit, inventing the dish. Either story being true, it is not disputed that from its inception in 1958, the Ongpaucos built a formidable restaurant empire called Barrio Fiesta, often pairing the crispy pata with kare kare (oxtail and tripe stew with vegetables and an achiote-colored peanut sauce).

The popular crispy pata origin story is that a young son of a restaurant owner was castigated for overfeeding his friends, and was only allowed by his mother to continue to feed them discarded pork knuckles.

Another notable crispy pata is the one served in the long tenured restaurant in Makati Medical Center’s Floating Island. Often paired with adobo rice, many patrons would fearlessly indulge in the dish knowing that many doctors were nearby and that the emergency room was always open.

Something as delicious as crispy pata couldn’t possibly be good for your health.

Yet, during the heyday of high-protein diets, the uninitiated flock that dove into the trend without proper guidance would ingest copious amounts of fat and protein. What would be a better diet food than a crispy pata with vegetables on the side? Eventually the fad conscious diet crowd once again eschewed fat along with carbs and limited their portions.

The only trendy place of memory that was known for their crispy pata was Faces, a club that lived through two separate locations and was the epicenter of Manila’s posh nightlife scene for over a decade. It seemed incongruous to serve it in a dance club where the main attraction was watching people. Sticky fingers and dancing didn’t seem to go together but the Faces location that is now Ayala museum had a large lounge area where people would indulge in specialties, which also included bulalo (boiled beef shank soup), and baby back ribs, among others. Their version of crispy pata had the meat marinated or brined to the point that it was like eating corned meat.

While many establishments would get crispy pata right, many would go wrong.

The essence of the dish is the contrast between the crisp exterior and the succulent interior. The most common faux pas would be to over-cook the dish until everything is crisp and the meat becomes a desiccated, inedible mass.

The next mistake would be to debone the pata prior to cooking. Many restaurants have done this in the vain hope of elevating it to something that it’s not—an elegant dish. Few chefs can do this properly. In my opinion it results in a loss of flavor and moisture.

Since every Filipino restaurant tends to have a version of the dish, many freeze the pre-simmered knuckle in preparation for deep-frying; because of this, a common mistake is serving the dish with a cold interior. Biting into unanticipated cold collagen and fat along with room temperature skin that needs further crisping is disgusting.

Perhaps the most disgusting faux pas would be serving a crispy pata with pig hair still intact. I’ve often sent back a dish that needed a trip to the barber. I don’t know why but certain traditional German chefs would serve the dish with unshaven hair near the hooves. Perhaps it’s like the Spanish tradition of keeping the hair near the hooves of high quality jamon to boast of the quality of the breed used for the ham. I can state with all certainty that when it comes to crispy pata, bald is definitely beautiful.

Rather than focus on the negative, let’s look at the variations of the dish developed by many inventive cooks.

Rather than focus on the negative, let’s look at the variations of the dish developed by many inventive cooks. Not many people remember Tito Rey’s, the former partner of The LJC Group of Companies. The restaurant Ang Hang, which I believe was originally a collaboration of the two groups, developed a dish called Knock-Out Knuckles, a version that is topped with golden fried garlic and sliced chilies. Knock Out Knuckles was declared as the greatest pork knuckle dish by Madhur Jaffrey (the noted food expert and author) and the late great Doreen G. Fernandez. While Knock out Knuckles appears in the menu of several LJC Group outlets, another version called TKO is served in Kuya’s, a restaurant on Bayani Road, Taguig, owned and operated by Chito Bautista who together with his brother Rey ran Tito Rey’s in the 1980s. The jury is still out on which knuckle is better.

This is a new tradition that echoes the Spanish tradition of cutting a cochinillo with a saucer. While the chef claims to have perfected the technique, it’s clear that a large factor of the superior quality of the dish is the high quality of the pork used. This restaurant exerts effort in choosing the ingredient used.

Many chefs have experimented with variations on the sauces of crispy pata. The traditional sauce would be a soy sauce with onions brunoise, garlic, and a little sugar. I’ve seen variations with peanut sauce, bagoong, and concentrated adobo. Some work some don’t. I guess it depends on a diner’s mood or preference.

Some chefs experiment with the kind of pork: a restaurant called Livestock currently has been hailed by the blogosphere to have the best crispy pata. It’s cut with a Popsicle stick, manifesting crispness of the skin and tenderness of the meat.

Chef Jay Gamboa of El Cirkulo and Cafe? J uses a baby pata leg to create a dish called a Patita. The result is a leaner pata that does not sacrifice succulence.

Some chefs have produced versions of the dish that should be remembered despite their no longer being available. Chef Katrina Kuhn Alcantara’s short stint as the chef of the Alpha at Alpha Land South Gate Mall was noted for selling a goose-fat fried crispy pata.

The Writer’s Lounge at the Raffles Makati, through the creative genius of Chef Robert Bolanos, once boasted a crispy pata which seemed to be produced using molecular gastronomy, vacuum-marinated (the flavor thoroughly seeped throughout the meat), and served with a dehydrated powder sauce that had flavor notes of soy sauce, garlic, and vinegar.

The crispy pata has come a long way from an attempt to feed a gang with an ignored ingredient to a staple in Philippine cuisine. Now that the rest of the world is beginning to notice Philippine cuisine, who knows what version of the dish might gain international renown?

About The Author
Tonico Manahan
View Other Articles From Tonico
Get The Latest Updates From Esquire!
Subscribe to our newsletter!
Latest Feed
Load More Articles
Esquire Money 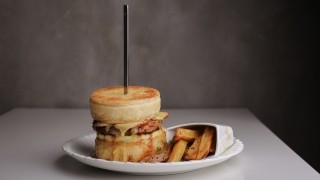 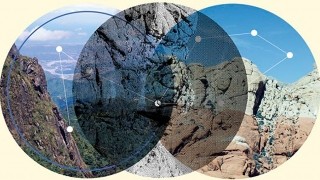 The Death of Local
All Photos
Comments
View As List