Sangkap is all about changing the way you understand Filipino cuisine. 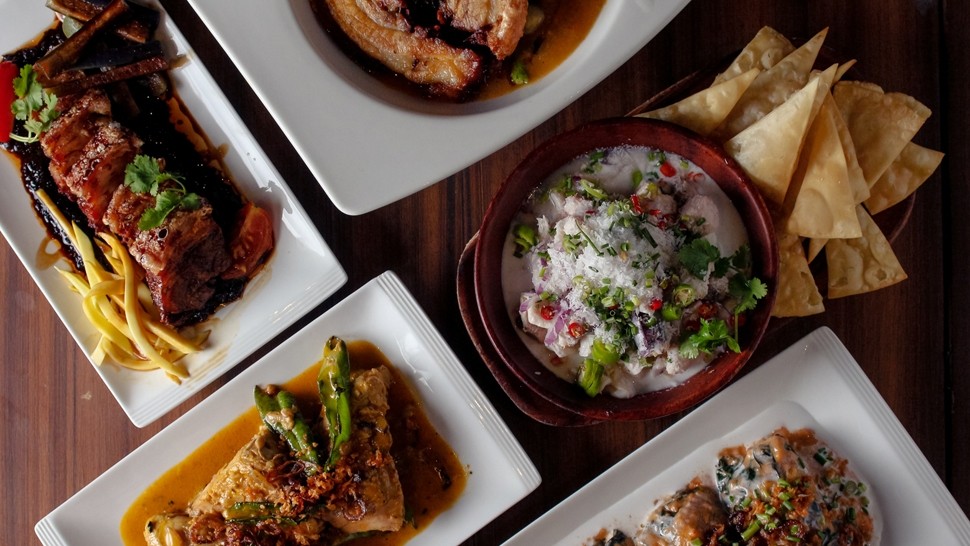 Despite its sinister interiors—gray walls, long blackboards, and deep brown tables and chairs—there is something immensely festive about Sangkap, a newly opened restaurant on Captain Javier Street in Pasig.

Perhaps it's the brisk service, the number of tables occupied the time we visited, or the colorful decorative embellishments that give the restaurant the feeling of a fiesta. We are, however, willing to bet our lunch money that the reason is on the table—the dishes in striking colors that spread a deliciously happy feeling.

“The concept is really from Chef Reymar Reyes,” begins Harvard Uy de Baron, one of the owners of Sangkap. “His expertise is Asian food, including Pinoy food, so we centered on that. We wanted a Filipino restaurant with a modern element to it, so we try to change as much as we could without sacrificing the real flavors of the dish.” 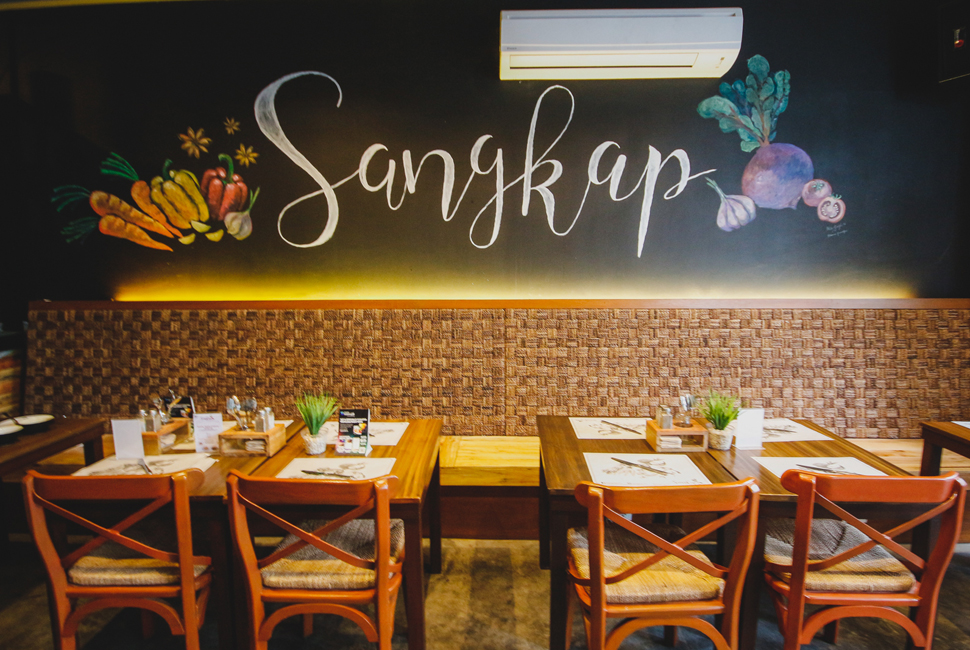 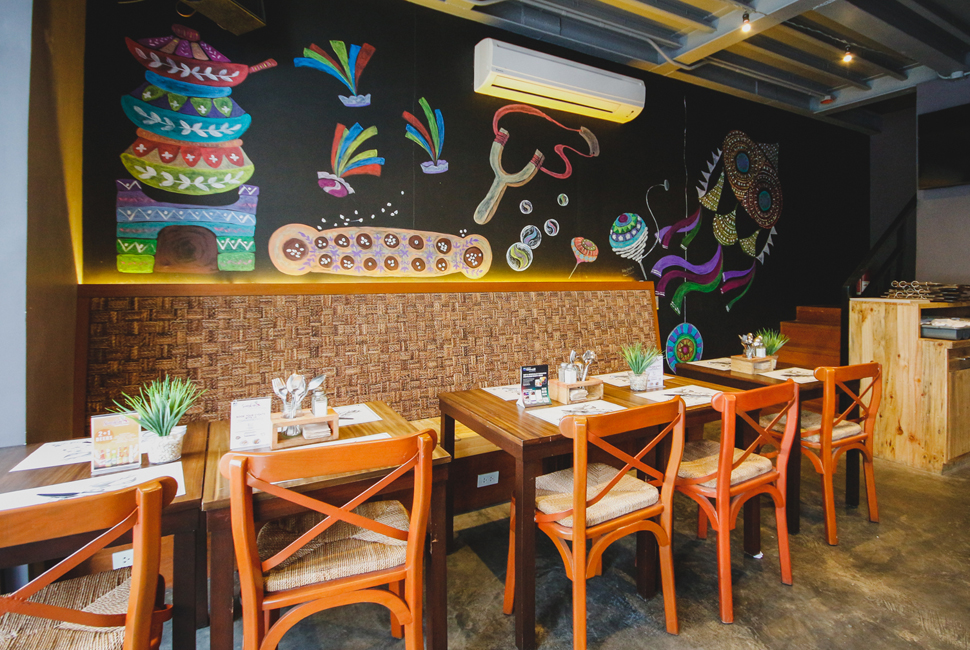 At Sangkap, it’s not just about adobo, sinigang, or tinola. The restaurant also tries to cover regional cuisines to represent the entire country, noting on the menu the history of each dish.

An example is the Ivatan Kilawin, which is originally from Batanes. “Instead of the usual taningue, we actually played around with other seafood. And then we added coconut milk to make it thicker, and less sour,” says Harvard.

Meant to be eaten as a really thick and chunky dip, the Ivatan Kilawin is served with deep-fried chips as a starter. The chips help cut the unusually high heat level of the dish and the combination makes it a good contender for happy-hour bar chow.

Coconut, it seems, is one way Sangkap likes to update its dishes. Gata is added to tinumok, a specialty from Bicol, as well as in the chicken inasal. The beauty is in the results: despite the common ingredient, everything tastes different. The coconut lends a graceful note to the tinumok, but it makes the chicken amazingly rich—enough to make you want extra rice.

The Binagoongan Bagnet is an easy, early favorite. The pork is cooked separately, ensuring that the crunchiness remains even after it's slathered with sweet bagoong. All we need is some peanut sauce and we have another Filipino favorite in our midst. 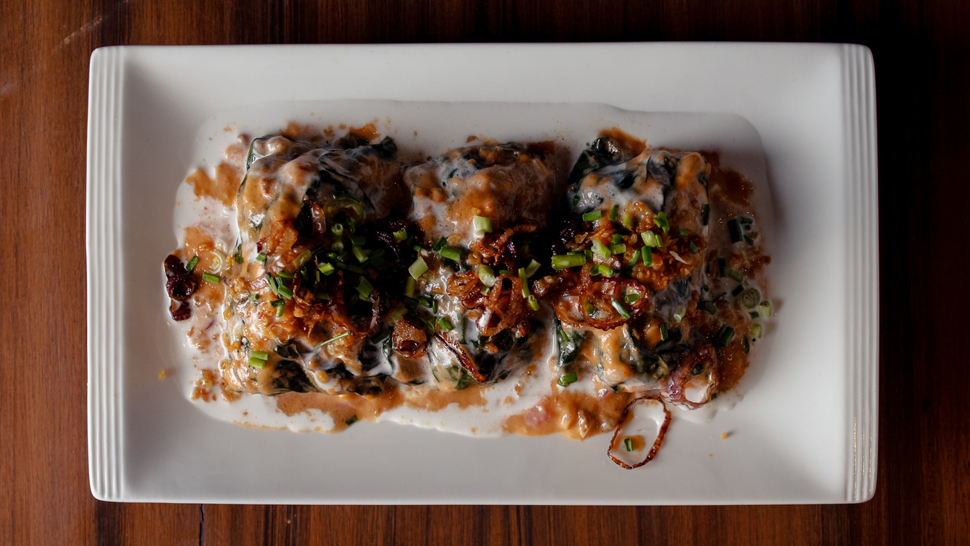 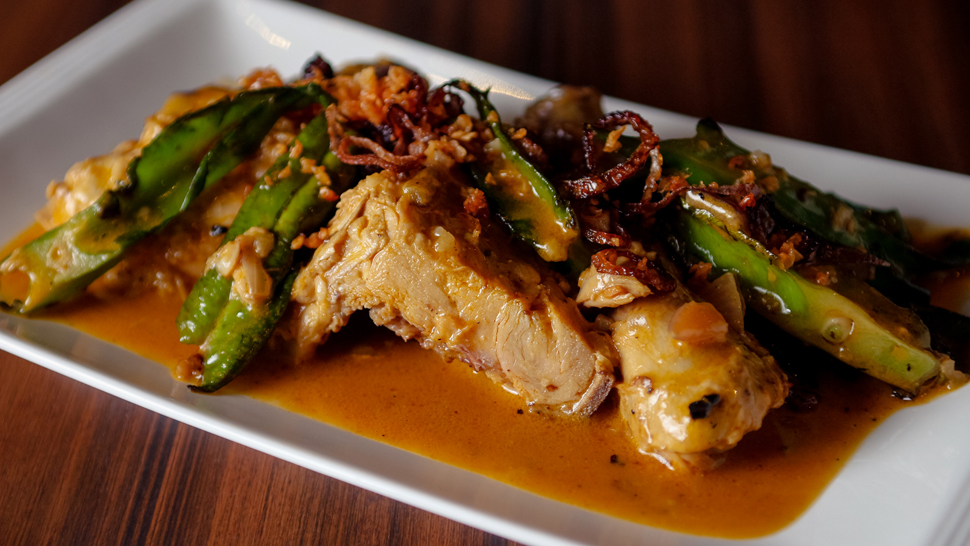 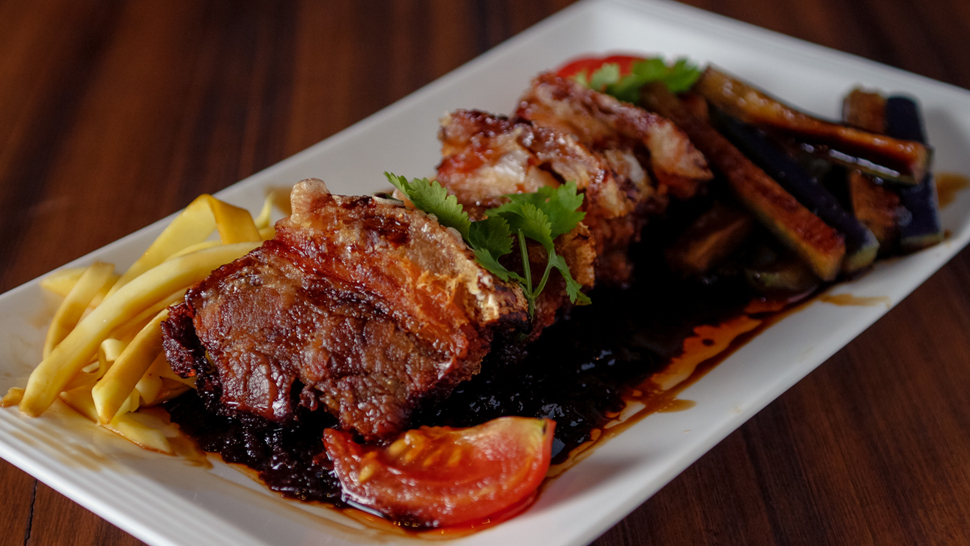 In the new habit of chefs turning soups into sauces, Sangkap comes up with the Cebu Lechon Sinigang. The pork belly is roasted for eight hours and then deep-fried, before being carefully laid on top of soup that's been reduced to a dense almost-cream. “There are three cookings that go in this dish: the lechon, the vegetables, and then the sauce,” Harvard continues.

Unlike the traditional sinigang made sour using tamarind, guava, calamansi, balimbing, or Indian mangoes, Sangkap adds yellow mango into the mix, making it thicker and more yellow than the usual clear broth we’re all used to.

“If you want something more traditional, we have the Duo or salmon and bangus sinigang, which has all the classic ingredients floating in the translucent, tangy broth.”

No Filipino restaurant is complete without kare-kare, and Sangkap has two variants: one with bagnet and another with beef. The latter aims to be a true nose-to-tail dish; on the menu, Sangkap refers to it as “ulo hanggang paa.” 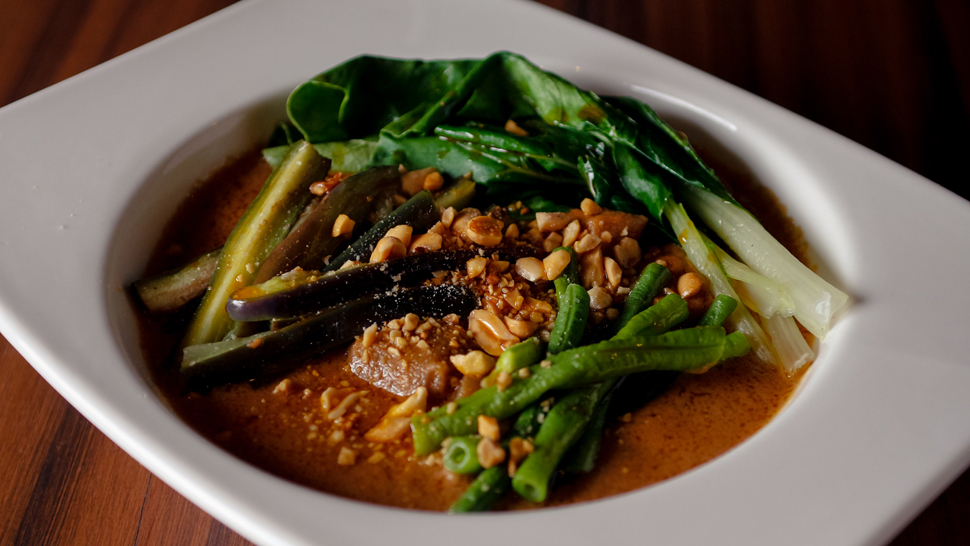 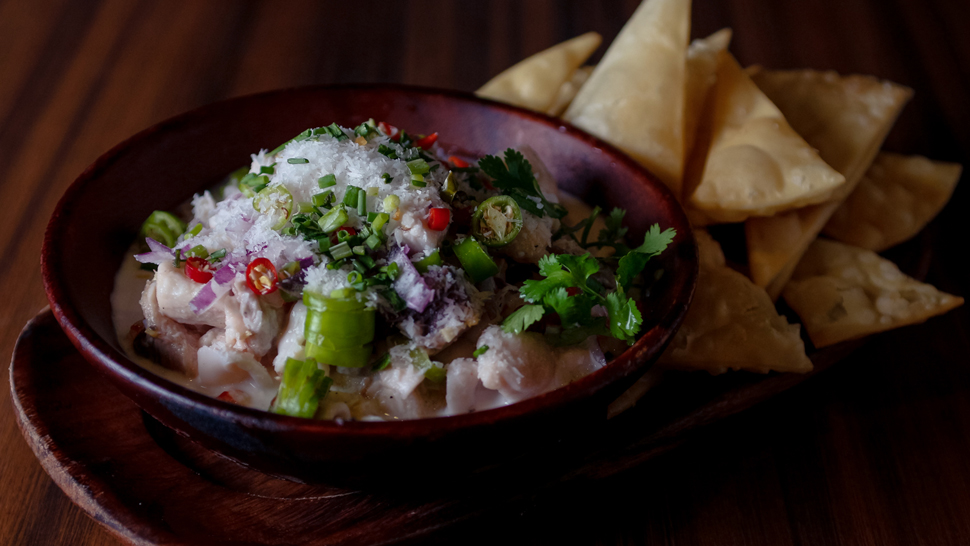 But it's not the choice of protein that makes it special; it’s the stew. In Sangkap, they’ve opted to use peanuts (instead of bottled peanut butter) through and through, making the dish pleasantly sweeter than most and lending it a nice texture.

Surprises come aplenty at Sangkap—whether it’s the unusual inclusion of coconut in a dish, the methods they use to cook, or, even, just the very idea of it. The latter is a theme in the desserts Though the restaurant offers ice cream flavors that are Filipino-inspired, some of them feel a bit hard to pull off. Vanilla and Calamansi may be easy enough to stomach, but then the alternatives are Palitaw, Champorado, and Bicol Express for the daring and the adventurous. 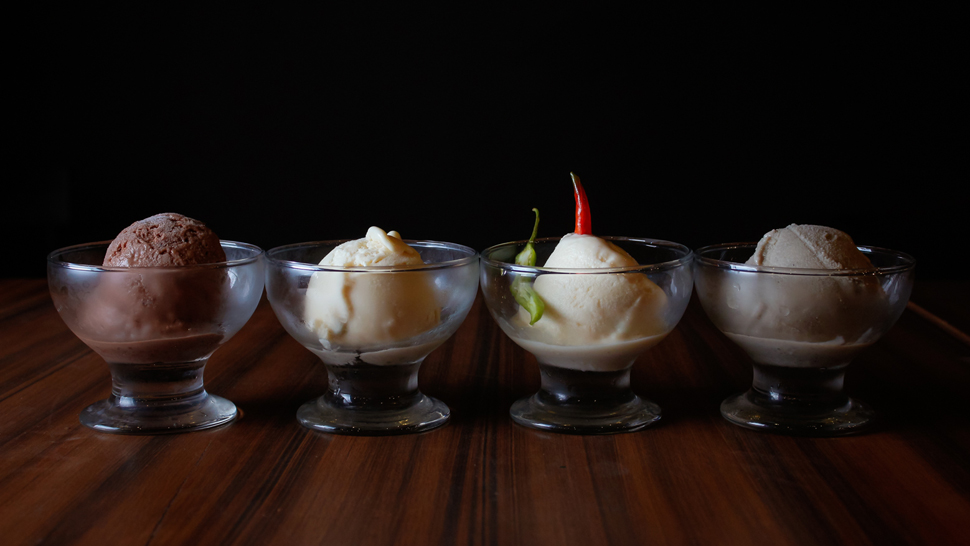 The last one is a play on tastes. Thanks to coconut milk, the first few licks come out light and cool, but just when you think it doesn’t have the promised heat of the Bicolano dish, the fiery flavor comes out kicking at your throat.

After a meal closed with spicy ice cream, we couldn’t help but agree. 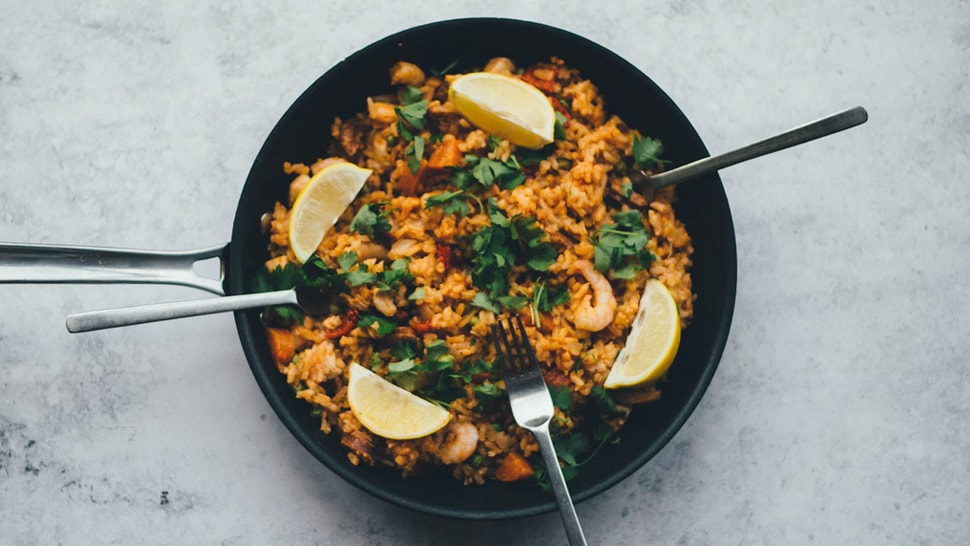 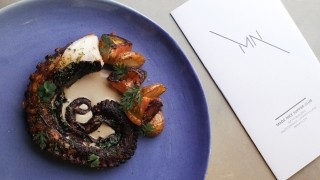