This Ice Cream Is Designed for Every Kind of Single Person

Being single on Valentine’s Day isn’t always easy—everything is marketed toward couples, from special dinner menus to restaurants’ window displays. Plus there’s the ungodly traffic to contend with. We could all use a little levity on this sappiest, cheesiest of holidays, and that’s where Sebastian’s comes in, with four hilariously named flavors created especially for singles.

There’s Matinong Girlfriend for men and Matinong Boyfriend for women, along with Closure for the lovelorn and Unresolved Issues for those who can’t help but stay bitter.

While Carandang reinvents the flavors yearly, he always sticks to a certain profile: Matinong Girlfriend is perfect for bros who love watching Epic Meal Time; its previous versions included potato chips, chicharron, and Cheetos. This February, instead of drowning your sorrows in alcohol, why not treat yourself to a delicious cup of beer and nuts ice cream? “[It’s] Cerveza Negra with a bit of malt, almost caramel flavor to it. And then we make our own honey-roasted peanuts coat them with bittersweet chocolate,” Carandang explains.

By contrast, Matinong Boyfriend tends to be more sophisticated and complex, and is always fruit-based. This year’s iteration is especially indulgent: dark chocolate ice cream with orange zest and a hint of rum, complemented by candied hazelnuts with a bit of cinnamon. If you enjoy wine, you’re sure to love Matinong Boyfriend—every bite is like taking a sip of a fine vintage, with various flavors revealing themselves the longer you let the ice cream linger on your palate.

When asked which Valentine’s Day flavor is his favorite, Carandang answers without hesitation. “Matinong Boyfriend, because here I really went one level up, [making it] more refined and trying to really go into layers of flavor," he says "When I started [Sebastian’s Ice Cream], I was really more complex. But in the past couple of years, I’ve pulled back and gone more simple. So this one is a bit of a throwback to the earlier ice creams that I used to [make], trying to figure out how many layers of flavor I could do.”

Closure is always tea-based, designed to reflect that feeling of inner peace when you’ve finally come to terms with the end of a relationship. “There’s no chunks. It’s more smooth, it goes down easy, it’s more about soothing the soul,” Carandang says.

This year’s ice cream is made from Genmaicha or Japanese green tea with roasted brown rice. Its toasty, slightly nutty notes are absolutely comforting, and it’s the kind of flavor we could easily see ourselves digging into on a stressful workday.

Made for those who simply can’t move on, Unresolved Issues is the one flavor that never changes: ampalaya sorbet with candied ampalaya. Carandang made it as a joke and never expected it to sell, and yet somehow it always does. “It’s there just for the display. But the funny thing is you can sample any of the ice creams, right? But every year, may malaking hugot pa rin, may nag-scoop pa rin even though you could taste it for free, so that still amuses me. People actually still buy it, that’s the funny thing. I think they do it also as a prank.”

Carandang’s inspiration for Sebastian's Valentine’s Day flavors came from a joke as well. His friend Carlo Vergara—creator of Zsazsa Zaturnnah—messaged him in October 2014 and said, “My friend, you know your next hit flavor will be named Matinong Boyfriend.”

“I thought, that’s a good idea and come February [the next] year I did it just as a lark,” says Carandang. “I’ve spent most of my Valentine’s single. If you’re single during Valentine’s, it can be a little bit depressing if you want it to be because everyone’s aiming for couples, so I wanted to do a little bit of counter-programming. Let other people market toward couples, I’m marketing toward single people.”

Carandang released Matinong Girlfriend and Matinong Boyfriend on Valentine’s Day 2015, and the two flavors did so well that he added Closure and Unresolved Issues the following year. Since then, these four flavors have turned into a Sebastian’s tradition.

Apart from their Valentine’s collection, Sebastian’s is also bringing back their seasonal flavor Flowers and Chocolate—a blend of bittersweet chocolate ice cream and rose ice cream. “This is actually the first time that we’ll be releasing [Flowers and Chocolate] purposely in February. I just remember that my friend ordered a pint and gave it to his girlfriend, and I thought that was sweet,” Carandang shares. He made a point of using rose jam from Iran instead of rose extract in creating this flavor, so that it wouldn’t smell or taste like your grandma’s perfume.

If you do have a girlfriend and she enjoys floral teas, she’ll definitely appreciate this flavor. Think of it as giving her a bouquet of roses and a heart-shaped box of chocolates in the form of ice cream. A new Poppit flavor rounds out the collection: strawberry ice cream dipped in strawberry couverture.

Sebastian’s Ice Cream’s Valentine’s Day flavors will be available from February 1 to 29, 2020. If you’d like to buy some to enjoy at home, you can also order by the pint, half-gallon, or gallon—just place your order at least three days in advance and pick it up from your chosen Sebastian’s branch. 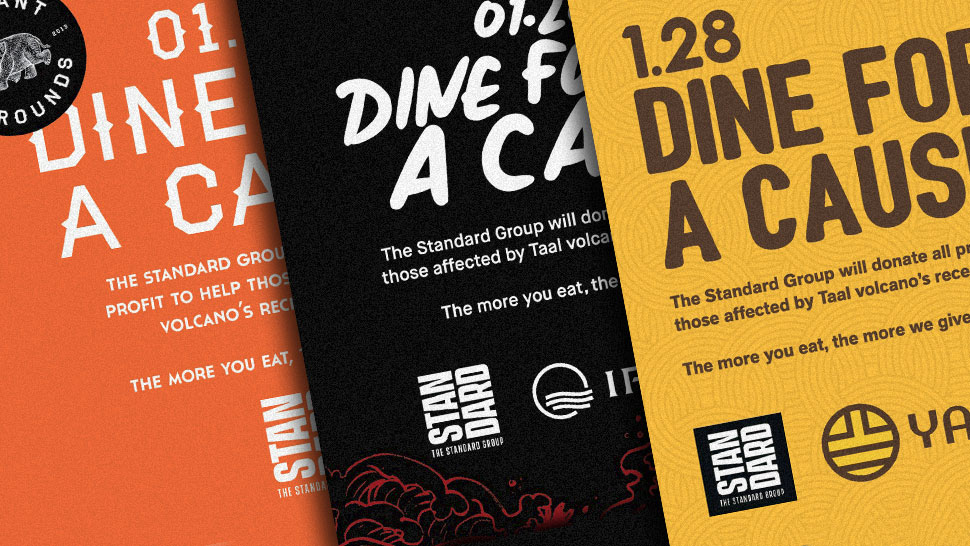 Yabu, Ippudo, and Elephant Grounds Are Donating Proceeds to Taal Victims For a Day
All Photos
Comments
View As List