Amid the picturesque olive farms of Spain

Doña Elena takes us around the Spanish farms where they get their premium olives. 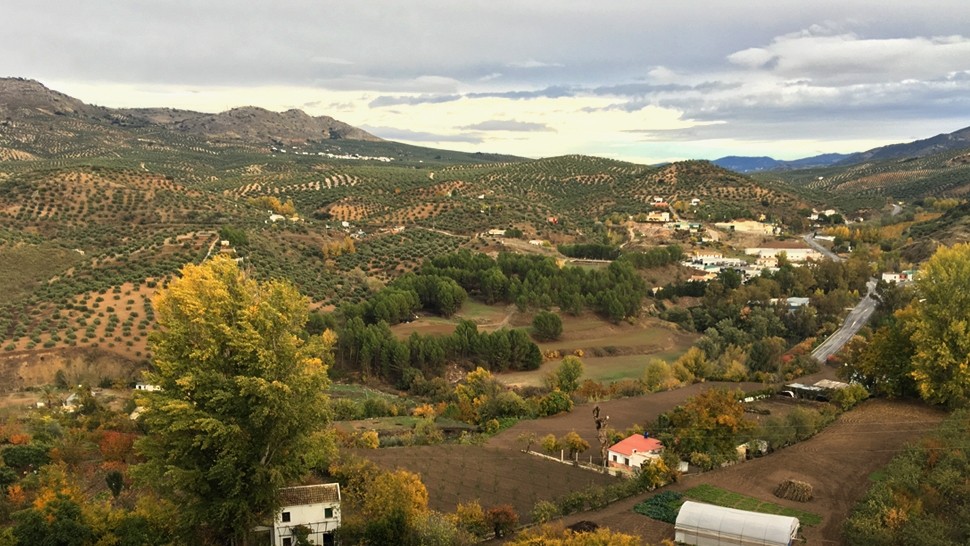 My earliest interaction with olive oil is through bricks of crusty focaccia and dark vinegar. We had it with pasta and salad, when you're a kid, there was no greater joy than marveling at that special, translucent-green liquid, a little pool studded with unyielding black circles. Happy with my own little “science” project, it was years later when I learned that better kinds of olive oil didn’t need that tart aid from balsamic.

This little tip was reinforced in a recent trip to Spain where rolls came with bottles of green-tinted oil and nothing else. Pedro Rubio, a jovial Spaniard with a fondness for pea-green coats, told us that, like walking shoes and sashimi, it doesn’t pay to scrimp on the stuff. “If you see olive oil that’s really cheap, that’s probably not olive oil.”

It’s sound advice, one that brought us one cold November to the mountains of Spain, watching olives travel from tree to bottle. Pedro is the general manager of Agroatlantica, the European buying partner of local company Doña Elena, and what's more astonishing than his remarkable flamboyance is his ability to talk about anything, whether it's regarding the oldest olive trees in the Mediterranean or the set of Goya paintings in the Prado Museum. 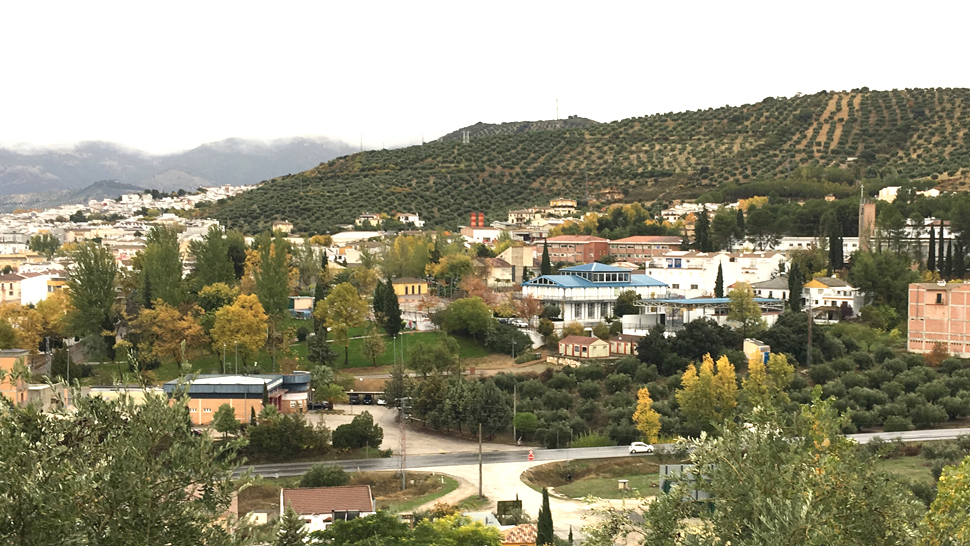 The olive farms should be a Spanish destination themselves: picturesque trees that one could easily mistake for large shrubs. They’re set a couple of feet apart from each other in well-designated rows that make the whole scene look like a speckled blanket spread over hills. It's a surprisingly soothing view You can marvel at the landscape as you take the two-hour train ride from Madrid to Cordoba.

Olives are traditionally planted on the mountains. The fruit, we learned, are temperamental things that vary in results depending on the way they were grown. Miguel Muela, one of the brothers who run one of Spain's most successful olive oil companies, says the olives are best when you make them work. “They thrive in extreme temperatures, like when it’s really cold and really hot,” says Miguel in Spanish. “If you pamper them too much, they get really lazy,” adding with a little chuckle that they even allows pests to help make the trees more resistant. The quality of soil, the altitude of where the tree was planted, the milling process, and how the fruits were picked also contribute to the overall flavor of the finished product. Trees that are around 30 years old are said to be the most prolific when it comes to producing fruit.

Based in the idyllic town of Priego de Cordoba—a little over an hour away from capital—is the award-winning company that supplies Doña Elena's olive oils. Their own signature oil has received over 80 awards, including the World’s Best Olive Oil title bestowed International Olive Oil Council and Spain’s Best Extra Virgin Olive Oil from the Spanish Ministry of Agriculture, among others. Since 2013, it’s consistently been awarded a gold star by the New York International Olive Oil Competition.

Priego de Cordoba’s climate is especially ideal for olives. The company itself farms 2,000 olive trees, but they also partner with smaller farms to accomplish their large production. While mountain-based olive trees are ideal, they’ve also begun to adapt to a faster process, such as utilizing those planted on plains. It’s Miguel’s job to roam around the locations, ensuring that every tree is working to meet their exacting standards. The fruits are harvested between May and October (though this may change depending on the olive variety)—with the more premium varieties being picked at the tail end of the season.

There are over 200 kinds of olives in Spain, but in these farms, three are available: picuda, picual, and hojibianca. The latter two are used for Doña Elena’s recipe.

Picking, apparently, isn’t as simple as plucking an apple from a tree. Nets are installed near the roots to catch the olives as they’re shaken off the branches. The Muelas are particular about olives not touching the ground as a bruised fruit doesn’t yield the same quality and are sold at a significantly smaller price. 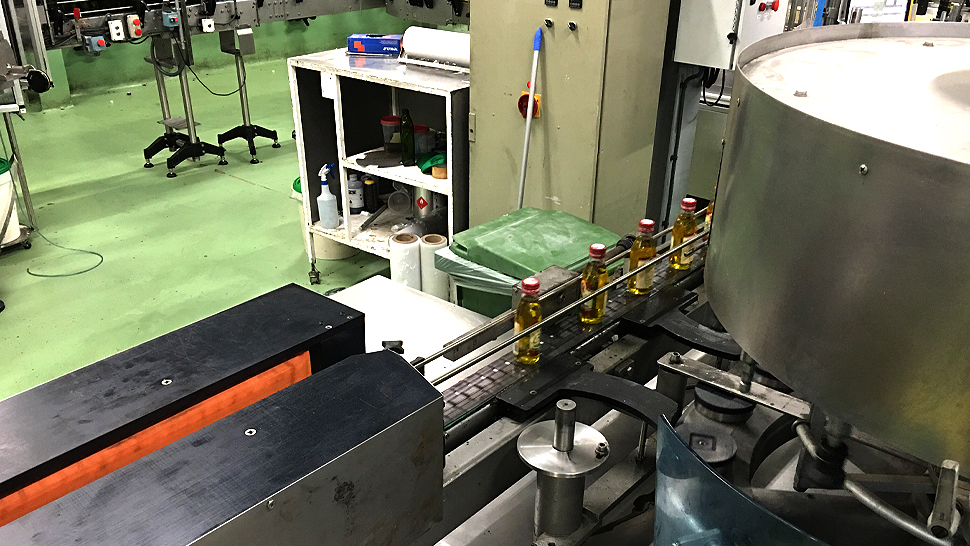 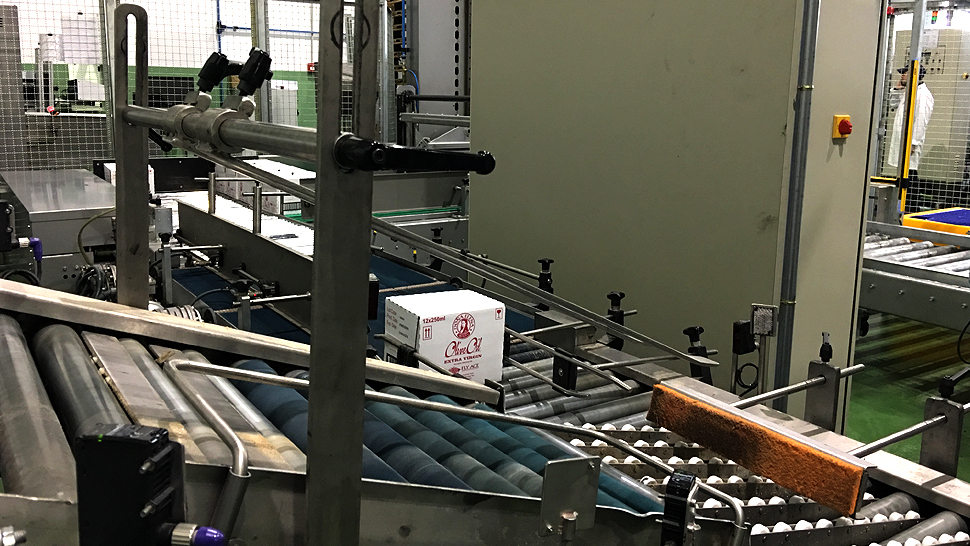 Mateo, Miguel's brother, takes over once the olives have been delivered to the factory. The second Muela brother shows us how the olives undergo a strict streaming and cleaning process that starts from ridding away the branches, as well as categorizing the fruit by location and grower. Mateo couldn’t help emphasizing: “It’s is very important to separate the olives by quality.”

In season, Mueloliva receives 300,000 kilos of olives per day. The olives that make it past the first cut are then put in a cold cylinder (less that 20 degrees) to extract the oil (which comprises 22% of the fruit). Instead of the usual cold press, Miguel says that crushing the olives are better for releasing the oil.

Most of the juice moves on to become virgin olive oil, while the leftover olives are further pressed to become the cheaper alternative, pomace. Whatever’s been squeezed out is locked into giant metal vessels that push air out of the oil. The metal keeps out the light, which is detrimental to the quality of the oil. Able to hold 10 million kilos, the tanks are closely monitored and carefully classified.

The oil then passes through a sort of sieve that will churn out that pure liquid. Mateo points at a metal bin reeking with the overwhelming aroma of freshly cut grass; inside, a mound of green sludge. “It’s all the impurities from the olive oil.”

The oil is bottled the same day they were picked. Because olives are seasonal and freshness is key, the factory would be running 24/7 during harvest. “We have to make sure we have enough supplies to last the year,” says Mateo. It’s an especially tall task. Spain produces 40% of the world’s olive oil, 60% of which comes from one region alone.

“Sometimes there are bad years for olives,” admits Matei. Pedro concurs: “Olive trees have memories. One year they work hard, the next year, they’re tired.” It’s an exact science, a timeless art, but also a matter of luck. 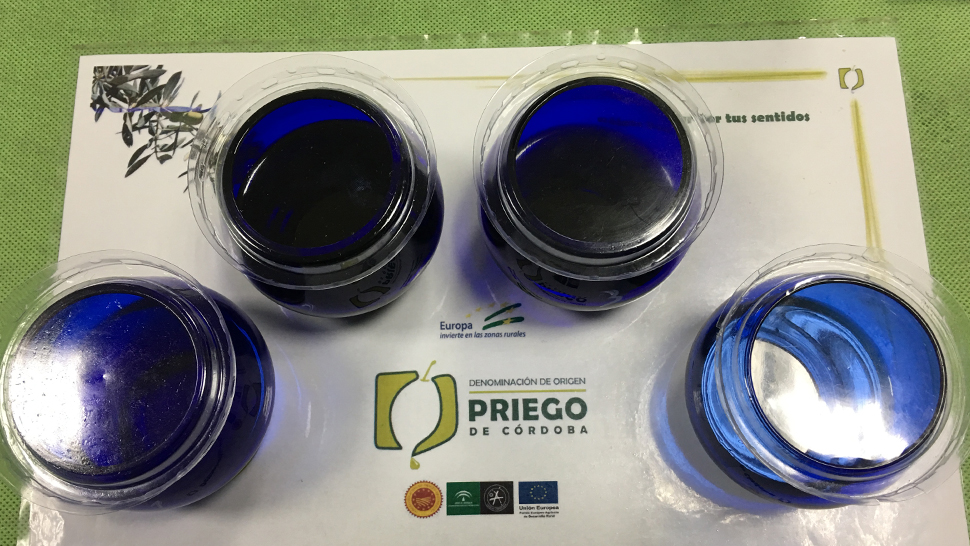 We meet a third Muela in the last phase of this enlightenment. Rafael, who sings Spanish opera at random, turns serious when he begins his explanation of the nuances in the oil’s smell and flavor. Though we can't categorically say that it's the most important step, its impact on the taste buds is perhaps the most crucial in the entire process.

In a classroom, four unidentified blue cups wait in front of each of us. The blue container, which initially feels like just a fun choice to match the mood of the group, is vital to the taste test. “People think the color of the olive oil is important, but it’s not. Some companies would put artificial colors in the oil,” says Rafael. "Here, you won't see the bias with the color."

The four cups demonstrate the range of olive oils available in the market—from a scent-less and colorless refined oil (a byproduct of defective olive oil purified to still be usable) to a lightly spicy, subtly grassy category to a much stronger, sneakily spicy blend that turned out to be the Muelas’ signature.

“What do you feel after?” asks Rafael once he revealed the last oil. “It's supposed to make people hungry.”

The “goldilocks” of the group turned out to be Doña Elena, a formulation specifically made for the Philippine company. It’s distinct enough to help flavor your standard salad or bread yet light enough not to overwhelm. It’s a strategy by Fly Ace CEO Jun Cochanco to slowly warm up Filipinos to a more premium type of oil. 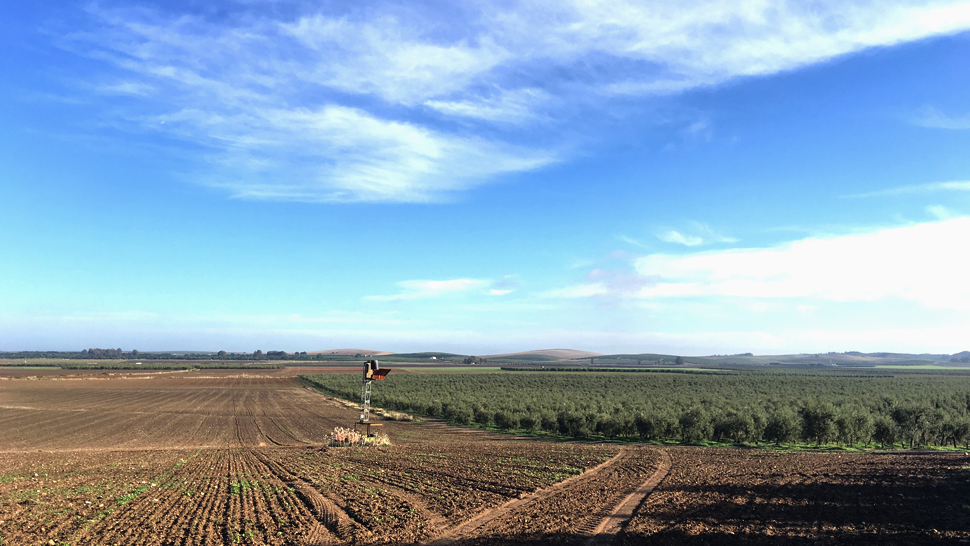 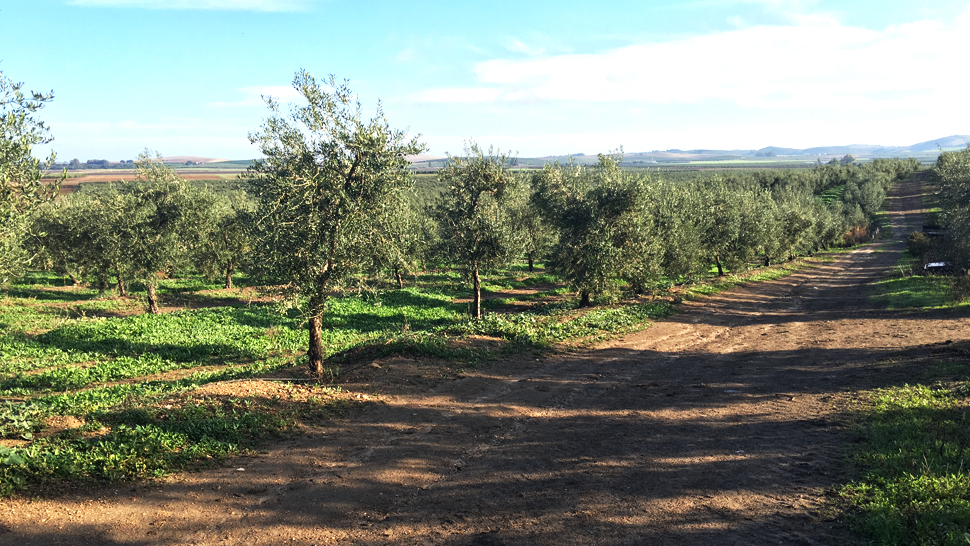 More olive trees beckon two hours away. As the road stretches towards Seville, so do the mountains outside, rolling towards the horizon and dotted with those shrubby olive trees. The destination was on top of a hill, windy plantation that looked like a scene from a Spanish telenovela—complete with horses running around (including a gorgeous white Andalusian).

This is where Doña Elena sources their table olives—bigger varieties compared to the ones crushed for olive oil. The manzanilla is typically used, but allowances in the category are made when production isn’t up to standard. Other olives used include hojiblanca (also preferred for oil) and the smaller cordal.

Table olives are harvested when they’re still green by growers called makakos—from the term “little monkey.” Once picked, the olives are sorted by size and quality before they’re left to soak in a brine in blue tubs. The olives are then left in the patio. The patio is essentially a wide balcony with deep tubes that run to the floor. Each pipe is filled with caustic soda to ferment the fruit. This particular factory can ferment 100 tons of olives at a time. 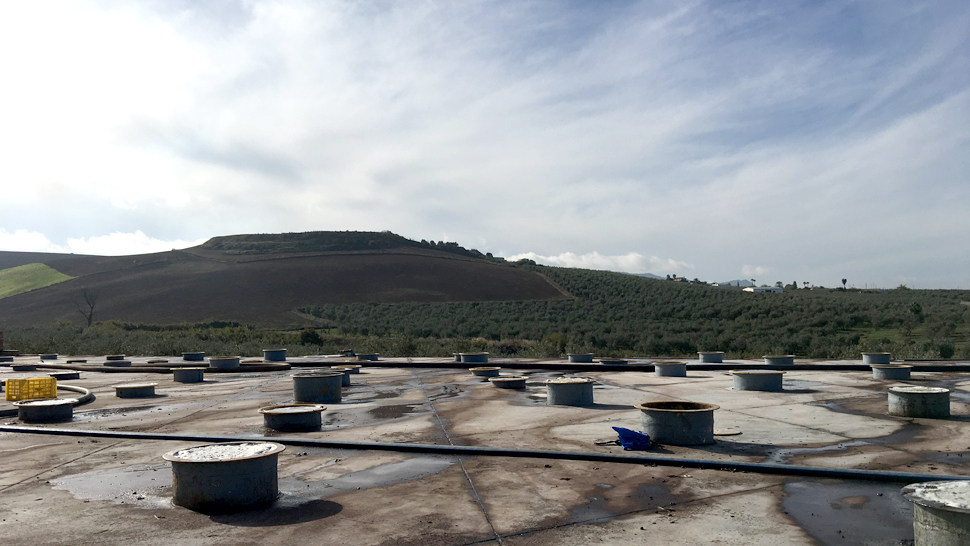 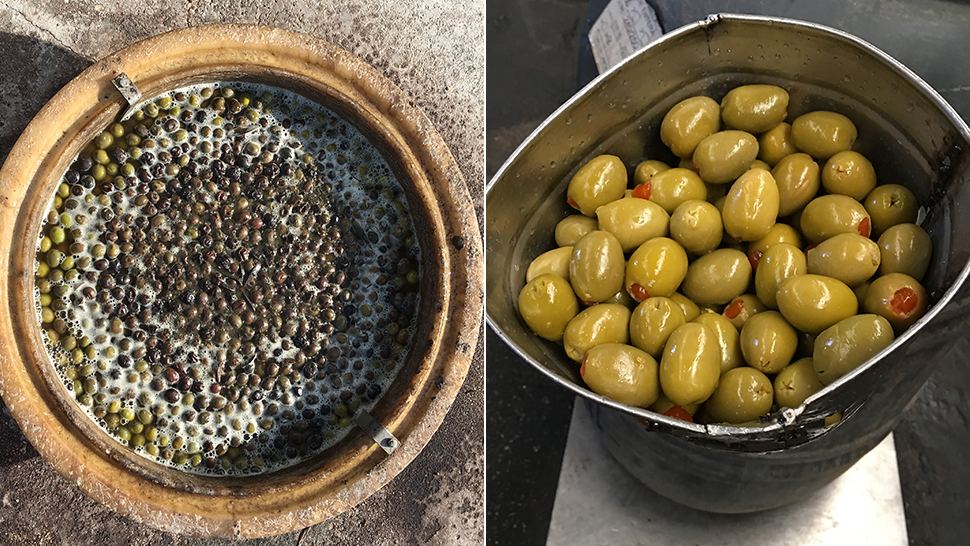 The brine leaves the olives with an intense saltiness, but the flavor becomes incredible after a wash. An extra step that's much encouraged is stuffing the tasty fruit. Though seemingly extraneous, stuffing can actually help show whether or not the olives were prepared properly. Olives that aren’t fermented correctly would crumble with the pressure of the drill that takes out the seed. Popular fillings include anchovies, lime, garlic, and nuts. The ones stuffed with pimientos are addictive treats.

Though the Spanish prefer their olives whole, Pedro tells us that Filipinos prefer theirs pitted and all ready to eat. In fact, they even tried launching stuffed olives to the Philippine market. But the palate has matured. The time might be ripe to launch it again. Until that happens, hoarding is necessary.

The olive farms in Spain are mostly privately owned, but you can catch a glimpse of them in a countryside drive around Andulasia (some people even have them in their yards). And while the scenery is picturesque, there's nothing quite like capturing their flavor in a bottle. Fortunately, we have that back home, too. 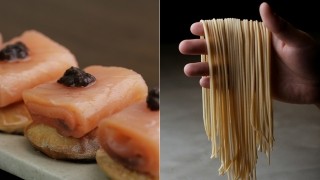 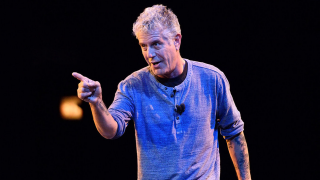