This Is How Men Make Brownies

World-renowned pastry chef Nick Malgiere shows us how to bake for a manly brownie. 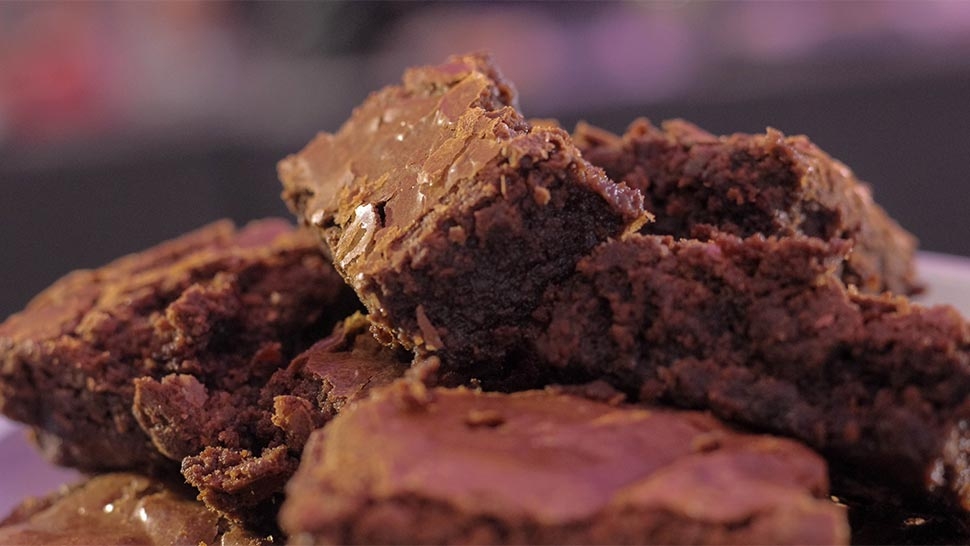 Baking teacher and author Nick Malgieri has already written a dozen baking books—and surely there was no need for another brownie recipe. But this one came by way of serendipity.

Malgieri was making his popular fudgy brownies for a friend’s party, increasing the proportions of the ingredients to produce more servings. As the brownies were baking, however, he realized he hadn't put in enough flour. It was too late to remedy the batter, so he waited until the baking was done and resolved to repeat the “mistake” if it turned out good. By some stroke of luck, it did.

New York Time’s Julia Moskins had once called Malgieri to ask about the brownies after she encountered them at a dinner party in an elaborate a la mode dessert. “I call these ‘Supernatural Brownies,’ says Malgieri. “They happened not because of anything I did, but something that made them work from the outside.”

If you’re just starting out to bake (to impress someone or just to try your hand at baking), these Supernatural Brownies offer an exciting beginning. “It’s not a long-winded recipe,” says Malgieri, who demonstrated the recipe at the recent World Food Expo (WOFEX) for the chocolate brand Aalst. The secret of the brownies (aside from its serendipitous origin) is to use a good chocolate. 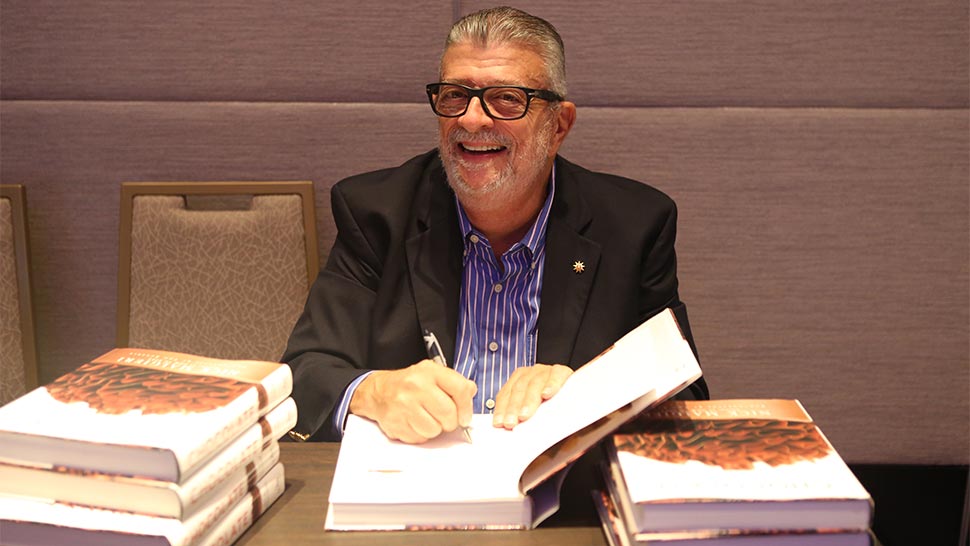 Malgieri used the Patissier Dark 74% Chocolate brought in from Singapore by ComQuest for the Philippine retail market. To find good chocolate for baking, Malgieri recommends tasting different kinds. “See which one you like best. When you taste chocolate, the taste is gradual. Let the chocolate melt in your mouth. And then you can discern flavor notes in the beginning, in the middle and then the end. The beginning shouldn’t be harsh nor should the end. It should be kind of mellow.”

Chocolate tasting seems like a good idea, as if you’re in a wine tasting. You know, for research. While the taste notes should not be harsh, Malgieri notes that high quality chocolate has a really strong chocolate flavor, which is what will shine in your brownies. Recipes like these give chocolates nowhere to hide so get the best one you can find to make the product as supernatural in flavor as its name.

While the usual brownie recipe “will beat the sugar with eggs, then add the melted chocolate and butter, then add the flour last, that’s an excellent way to get lumps of flour,” warns Malgieri. He has since applied a neat trick that keeps the batter lump-free by combining all of the sugar and flour in a separate bowl. Doing so breaks down any lumps that may be present in the flour or sugar before it goes into the cake batter. After that, he adds the dry mixture to the egg and vanilla mixture. Meanwhile, the chocolate is gently melted with butter before adding to the rest of the ingredients last. This also prevents the chocolate from getting seized up when things get added to it.

The resulting brownies are smooth and fudgy (it also does not have nuts so you can make it for those with nut allergies). The original recipe can also be found in Malgieri’s award-winning book Chocolate, From Simple Cookies to Extravagant Showstoppers, which is still in print almost 20 years after winning the IACP/Julia Child Cookbook Award.

He has been coming to Manila for two years now for his annual ComQuest-sponsored “The Art of Chocolate” baking demonstration at the WOFEX upon the request of his friend, Filipina pastry chef Jill Sandique. Sandique had been Malgieri’s former student at the Institute of Culinary Education (formerly Peter Kump’s New York Cooking School) where he served as its founding director for the professional pastry program. Back in Manila, Sandique assisted her mentor at the sold-out show.

With his voluminous chocolate cookbook, this chocolate authority surely knows how to handle chocolate. At last year’s demo, Malgieri paired orange and chocolate in a flourless cake. He also made bourbon, hazelnuts and chocolate into a cake and a biscotti. At this year’s baking demonstration, he went tropical by making a banana, coconut and chocolate cake. But it is the unassuming Supernatural Brownies that prove to be a showstopper. 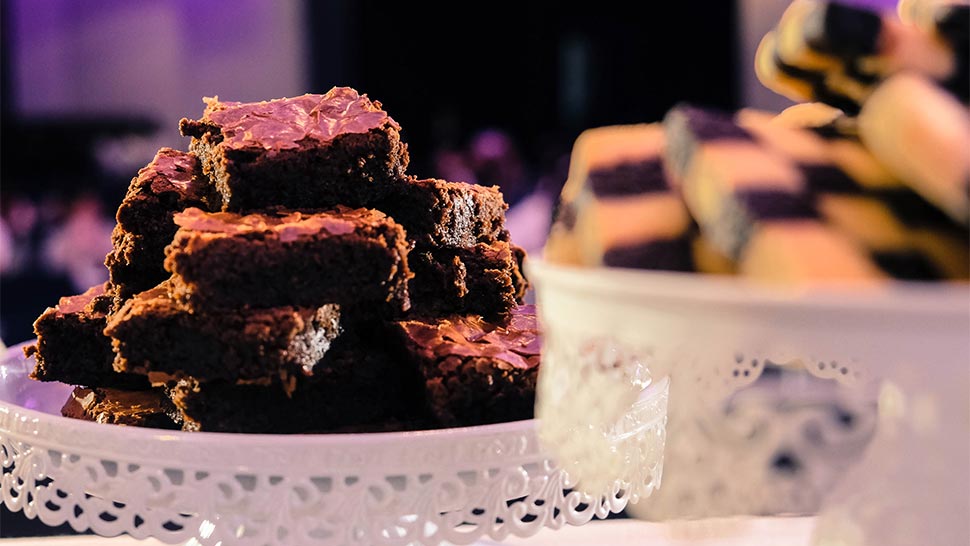 1| Butter and line the bottom of a 9-inch x 13-inch x 2-inch deep pan with parchment paper or aluminum foil. Set a rack at the middle level of the oven and preheat to 350°F.

2| Bring a saucepan of water to a boil and turn off heat. Combine butter and Patissier Dark 74% Chocolate in a heatproof bowl and set over pan of water. Stir occasionally until melted.

3| In mixer bowl, combine the flour, sugars and salt. Use the paddle to mix at low speed.

4| In a separate bowl, lightly whisk together the eggs and vanilla. Add to the mixer bowl on low speed until smooth.

6| Pour batter into prepared pan and spread evenly. Bake for about 45 minutes until top has formed a shiny crust and batter is moderately firm. Cool in pan on a rack. Wrap pan in plastic wrap and keep at room temperature or refrigerated until the next day.

7| To cut the brownies, unmold onto the cutting board, remove paper, and replace with another cutting board. Turn cake right side up and trim away edges. Cut brownies into 2-inch squares. 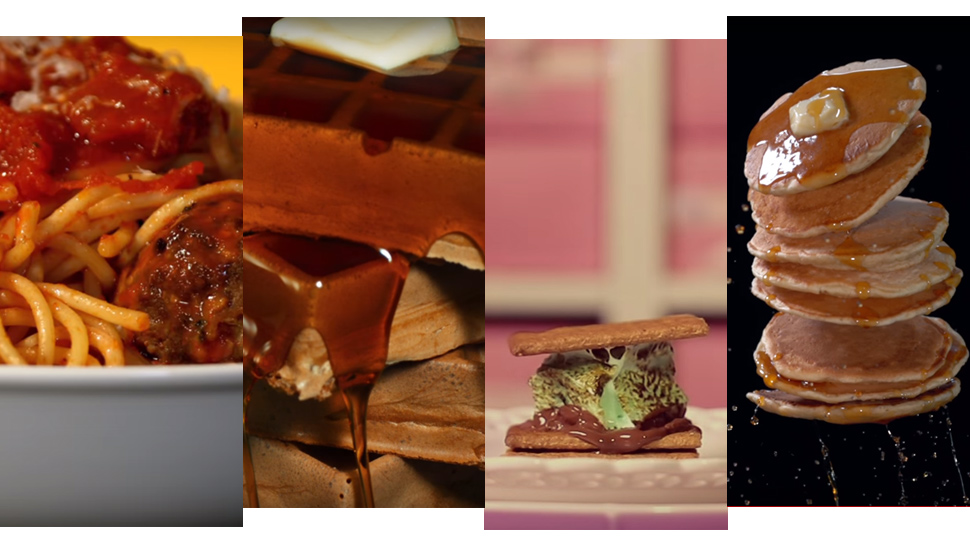 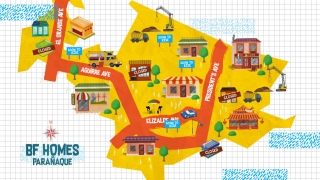 Is BF Losing Its Status as the Food Capital of the South?
All Photos
Comments
View As List