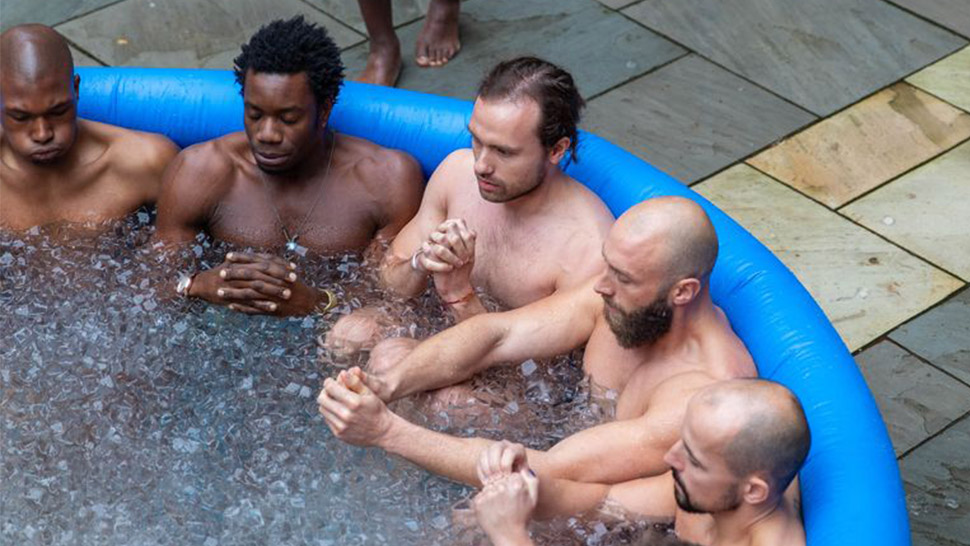 On a dismal Sunday afternoon in November, in a roomful of men, I’m standing—or rather squatting—in 'horse stance': legs wide and slightly bent, arms moving side to side as if kindling a Hadouken, in the manner of Ryu from Street Fighter. This martial arts posture is to focus our minds and warm our bodies for the forthcoming ice bath. Passers-by glance in through the windows of Fulham’s Re:Centre wellness space, as they walk by briskly to escape the cold and wet. I can only speculate as to what they think we’re doing. A 100-strong, all-male yoga class?

What we are in fact doing is “Answering The Call: Supporting The Minds Of Men”. Those of us who aren’t freeloading journalists with an interest in trendy, left-field health and fitness practices have signed up and parted with the curiously precise sum of £47.48 to attend “a very special experiential event […] using various modalities to explore new states of mind and body”. We’re hoping to answer the question of what it means to be a man in the 21st century, whether that is conducive to our health and happiness and (not unrelated) why suicide is still the biggest killer of men under the age of 45.

So why exactly are we doing an ice bath? To further quote the event blurb: “Nothing brings men together better than a challenge that has to be overcome together.” Horse stance completed, we strip down to our swimwear—to the tune of “Ice Ice Baby” by Vanilla Ice, which elicits some nervous laughs—and crowd around the door to a small courtyard containing a Slush Puppy-blue inflatable pool. Outside, tribal music plays, which lends the proceedings a ritual air. As my batch of bathers stands around the edge, waiting for the current occupants to finish their allotted two minutes, displaced ice cubes and water chill our feet.

For most of the men beside me, this is a novel experience, but I’ve at least done an ice 'bath' before. Or, rather, an ice wheelie bin, in an alleyway outside Barber’s Gym in Hackney. Then as now, I was also supervised by Artur Paulins, who as well as 'cold therapy', coaches strength, movement, Brazilian jiu-jitsu, yoga and breathing. Still, forewarned is not necessarily forearmed. Nothing fully prepares you for the shock, which snatches my breath away even though I know it's coming. I wrest it back with mindful breathing, of the kind Paulins guided us through beforehand. Panic subsided, the actuality of being in the ice, while not comfortable, is not as unbearable as I feared. It’s a teachable moment.

One half of the N.ICE Collective, which “explores and shares” several of the aforementioned modalities, Paulins got into breath work to calm his nerves before Brazilian jiu-jitsu competitions and eventually it supplanted his career in architecture. He’s certified to teach the Method of 'Iceman' Wim Hof, the Dutch cold therapy guru who, among other frigid feats, has spent almost two hours in an ice bath (the world record) and survived Mount Everest’s “death zone” (8,000m above sea level, where there isn’t enough oxygen) wearing just shorts, for which he credits his regime of meditation, breath work and cold exposure. Before our dip, Paulins’s co-founder, Martin Petrus, lists the purported physiological benefits of cold therapy, which include reduced inflammation, increased fat-burning, bolstered immunity and improved sleep. Petrus spends stints in his home chest freezer; more practically, Paulins suggests that we turn our shower to cold daily, swim in open water regularly, or just ditch our jackets.

The payoff of today's bath is more psychological. It's a challenge and a form of active meditation, since it’s hard for your mind to wander. It's also, as Paulins quips, “the ultimate ice breaker”. Over hot drinks, everybody warms up, in every sense. In different parts of the room, I have conversations with two strangers; when I return to my mat, I realize they’d been lying either side of me for the pre-bath breathing exercises, when of course I strenuously avoided speaking or even making eye contact. Maybe I was subconsciously predisposed to them because of that proximity, or maybe it was some cosmic coincidence.

Ben Bidwell, a mindset and purpose coach, begins his talk by staring in silence at us for what seems like more than two minutes. Better known as The Naked Professor, which is presumably an honorary qualification, he has posed in the altogether at London landmarks and on the This Morning sofa: an apt metaphor for his mission of “stripping away the masks of masculinity” and, one suspects, a canny promotional strategy. Today he’s clothed.

A former chartered surveyor, tech start-up founder and rugby lad, Bidwell is not shy—or if he is, he hides it well—about standing up in front of 100 men and talking about his history of sexual dysfunction: an inability to orgasm that he says was a physical manifestation of being emotionally shut-off (his friends at university referred to it as “the gift” for its effect of prolonging intercourse, even as it ended relationships). He also opens up about his struggle growing up invisible, as the youngest of three, which he says left him craving external validation. He stresses the importance of allowing yourself to be seen and of vulnerability, which he says men are taught from a young age not to show.

Next is Richie Bostock, variously a corporate management consultant and digital entrepreneur, who now goes by the moniker The Breath Guy. While researching ways to alleviate his father’s multiple sclerosis, he came across the Wim Hof Method. He’s now an “evangelist” for breath work, which he variously describes as “free medicine” and “therapy on rocket fuel”. He tells us that today’s event was precipitated by the recent suicide of his uncle; he may organize more such gatherings, depending on how this one goes down.

Lying back on our mats with our eyes closed, we breathe in deeply with our bellies rather than our chests, then relax out: what Bostock calls “bow breathing”, which implies pulling back the string with force then releasing it effortlessly. Following his cues, we alternately speed up, slow down and hold our breath in time with music that ebbs and flows, builds and falls. “Powerful” isn’t the word: it’s euphoric, like taking drugs, or so I’m reliably informed by some attendees. At one point, someone starts whooping; others join in. When 'Always Look On The Bright Side Of Life' unexpectedly lightens the atmospheric soundtrack, everyone laughs and whistles along.

Deep into the trip, Bostock instructs us to visualize ourselves floating in space, with our timeline stretched out in front of us and behind. Going back to the start of our lives then working our way to the present, we spray those with whom we have grievances using a “fire hose” of forgiveness, to which we ascribe a color (the forgiveness, not the hose—white in my case). At another point, he instructs us to bring to mind someone we love (for me, my wife); at another, to imagine transmitting energy to our neighbors and absorbing theirs in return. I can’t remember at what point I start sobbing uncontrollably.

Later, over email, Bostock explains that the bow breathing served to “turn down the volume” of my brain’s prefrontal cortex, responsible for complex thought and personality, so I was better able to listen to the lower-down limbic, or emotional part. As the floodgates open, I feel embarrassed, and relieved that the music is drowning out my sobs. But when I open my eyes, I can see that my neighbors have been crying too.

Bostock invites people to share their experiences. The story of the first, a reformed ex-convict, merits its own article. But in a nutshell, he had that morning scattered the ashes of his father, a heroin addict with whom he’d had an unsurprisingly fractured relationship. During the visualisation, he saw his dad as a young man with long blonde hair, the same colour as he ascribed to his forgiveness. I still can’t recount that detail without crying. Another strapping lad, eyes swollen, voice breaking, reveals that he visualized him and his girlfriend teaching at a school in Africa, a lifelong dream. Revelations come tumbling out with astonishing frankness, like an Alcoholics Anonymous meeting.

I still don’t know what it means to be a man in the 21st century, apart from “problematic”. For example, Bidwell talked about having the courage to “go after that girl who’s out of your league”: doubtless well-intentioned but the kind of outdated romantic conquesting that puts overdue pressure on all concerned (maybe try and connect with her, if she even wants you to). It’s also totally fine and inherently manly to be ambitious and strive, just as long as it doesn’t make you feel dissatisfied or inadequate. And after the breath work with Bostock, one attendee declared how great it was that we could be emotional and also “grrr”, which may not have reassured those men who aren’t and think they should be.

I don’t know what it means that we need a “manly” ice bath as a modality, medium, excuse or harmless bit of fun before we let our guard down. And I don’t know if ice baths or breath work do everything their converts claim, or for the reasons that they claim—the degree and solidity of scientific backing varies. But I fully believe that, given enough time, everyone in the room would have shared something with 100-plus strangers that previously we might not have been able to confess to close friends or family. We felt supported. 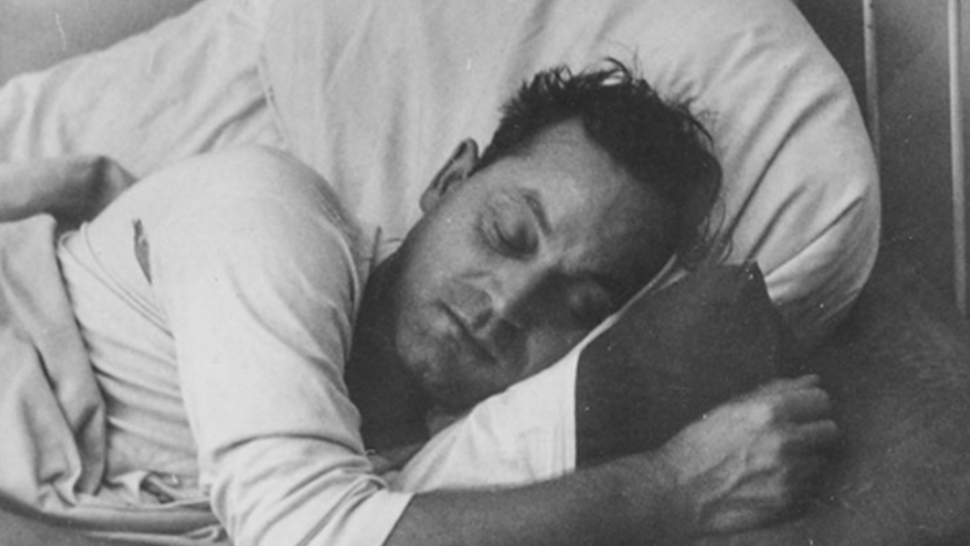 Don't Need Much Sleep to Feel Refreshed? You May Have the Short Sleep Gene 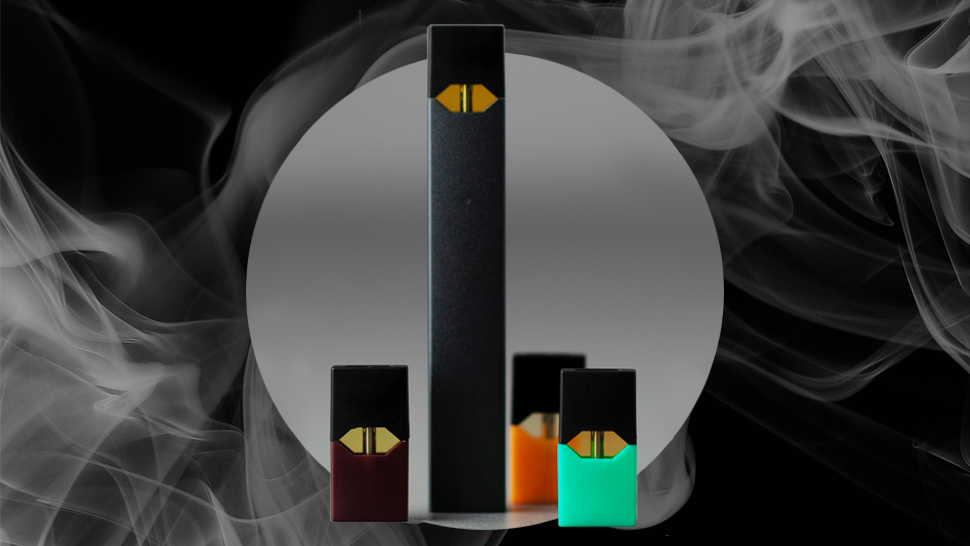