You Can Live Sustainably Without Being Annoyingly Self-Righteous 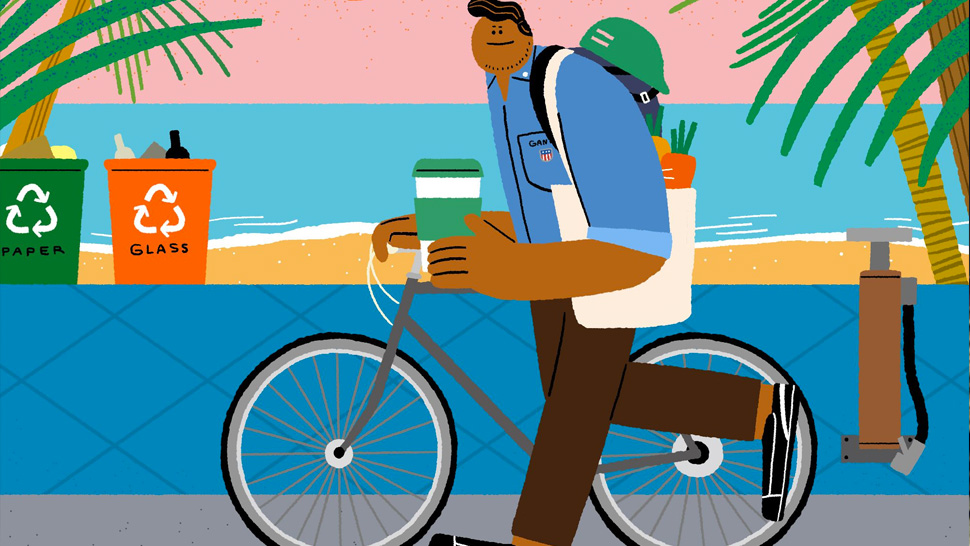 Al Gore was right. Our love of fast everything means we're on a slippery, strip-mined slope to envirogeddon. But equally, Al Gore is deeply irritating, and his elegies for a dying planet can make it tough to summon the will to fix it. Sure, you could get rid of your car and go vegan and grow your own kale. But is there any point in saving the earth if we make living on it that boring?

So instead, we present a handful of eco-wins that don't involve moving to a commune, or a radical increase in your lentil intake. And unlike going meat-free, or cycling everywhere, you won't feel the need to post your green wins on Instagram. Smugness is a greenhouse gas, after all.

Scrub your sink of scrubs

The men's grooming boom has been good for your face, but bad for polar bears. Hopefully you're already long shot of anything with plastic microbeads, but they're not the only baddies in your bathroom cabinet. Some products are stuffed with ecosystem-disrupting chemicals; others are made with palm oil, produced by decimating orangutan and tiger habitats. Then there's all those bunnies in labs with eyes full of shampoo, or packaging that can't be recycled and ends up in landfill.

To avoid being an ecological Dorian Gray, your beauty only increasing as the world outside your window decays, look for brands that think green: Bulldog uses natural ingredients and carbon negative packaging; Plant Apothecary's products are certified vegan and organic; Stop The Water While Using Me supports projects in Africa. Because we're pretty sure the stress of killing the planet is what's causing your crow's feet.

A man's wardrobe is not the timeless thing it once was. The rise of fast fashion means trends now cycle faster than Team Sky, and demonstrate an equally laissez-faire approach to the ethics of achieving that speed. As a result, the quality of what we buy on the high street has slipped, with clothes built to last a season at most before we toss and replace.

This is, obviously, not great for the planet. Or our mental health. But the fix is simple; step off the treadmill and invest in something that lasts, like GANT's new Beacons Project shirts. Not only are they classically cut, which means you'll be able to wear them in a decade and still look sharp, they're also made from a unique, long-lasting fibre that's been upcycled from sea plastic. This smart fabric (in both senses of the word), which was created for GANT by fiber brand Seaqual, is stretchy and wicks away sweat, but looks as refined as a regular cotton shirt. It's the smart way to keep oceans as clean as your look.

Washing machines and tumble dryers are the prime suspects in wrecked threads. Get the settings wrong and your favourite cashmere knit ends up as expensive teddy bear wear. But even if you get it right, clean clothes can mean a grubby conscience; your tumble dryer kicks out as much CO2 every year as a flight from London to Glasgow. To keep your whites green, stick to a 30C wash (modern detergents can clear pretty much any stain at that temperature) and let evaporation do the job it's always done. Plus, there's less chance of shrunken shirts that end up in landfill.

Hot on the heels of its plastic bag ban, the government is mulling a similar tax on throwaway coffee cups. Now, a 5p levy might not put you off your single origin arabica, but perhaps the fact that we toss 2.5bn cups a year–only one percent of which are recycled, since most are lined with plastic–will encourage you to invest in a more permanent receptacle. Aussie brand Keepcup has been ahead of the trend for nearly a decade now, and its reusable mugs boast BPA-free silicone lids that stop spills even when you stow the dregs in your work bag. Your eco-friendly coffee will taste so sweet you can skip the sugar.

Learn how to use a needle and thread

In the eco-warrior's mantra of 'repair, reuse, recycle', it's the first step that most men stumble over. It's not too tricky to cart your expired wardrobe to Oxfam, or repurpose a work shirt as your gardening go-to. But too often clothes end up in those piles because you couldn't fix some trivial damage.

Only 40 percent of Brits know how to sew a button back on; even fewer can fix a ripped seam or snagged thread. Cheap, fast fashion can make it more cost- and time-effective to replace, rather than repair, but that's also why we throw away more than a million tonnes of clothing a year, only a 10th of which is actually worn out. Invest in a sewing kit and keep your favorite shirt in your wardrobe, not the ground.

Dwayne Johnson Has Discussed His Battle With Depression