Who among us hasn't been in the same awkward position as Canadian Prime Minister Justin Trudeau? As a Southerner, I know what it's like to "be a hugger," though that's never something you should actually say to someone. And Canada, after all, is the South of the North, without the complicated need to reference a flag that hasn't represented its territory in 153 years.

But the life of a hugger is a tricky one. Upon meeting French President Emmanuel Macron this Monday, Trudeau ran into a bit of a sticky situation: a poorly executed hug. Just look at that form. Trudeau is full-on-butt-out. Macron is simply put, handling the incoming hug. Even that guard in the corner, a man in the background paid not to show any emotion, is visibly shaken. 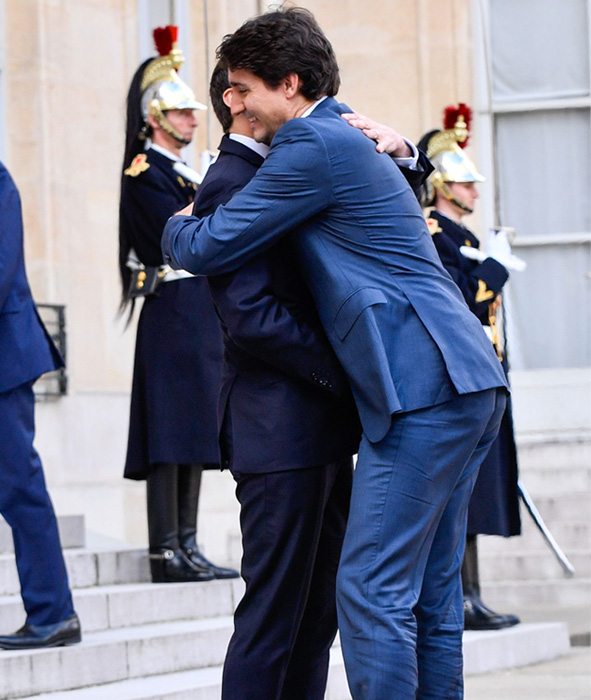 If you've never met someone, give them a handshake. Don't get crazy. But Trudeau and Macron are essentially buds. A hug is nothing to avoid among anyone you've met more than once. People who avoid hugs are as awkward as the people who poorly execute them. The important part is to know who you're hugging and the situation at hand.

FOR BEGINNERS: THE HANDSHAKE PAT

This is the beginner's course in hugging for people vehemently opposed to touching bodies with another human. It says, "I'm here to shake your hand, but I'm also not a total monster with a lack of empathy." Look at the hand placement there. *chef's kiss* Perfect shoulder grasp. Be careful not to place your hand too far up, as this is a sign of dominance and those with super fragile masculinity will feel attacked. A handshake pat is great for colleagues, or mild acquaintances. 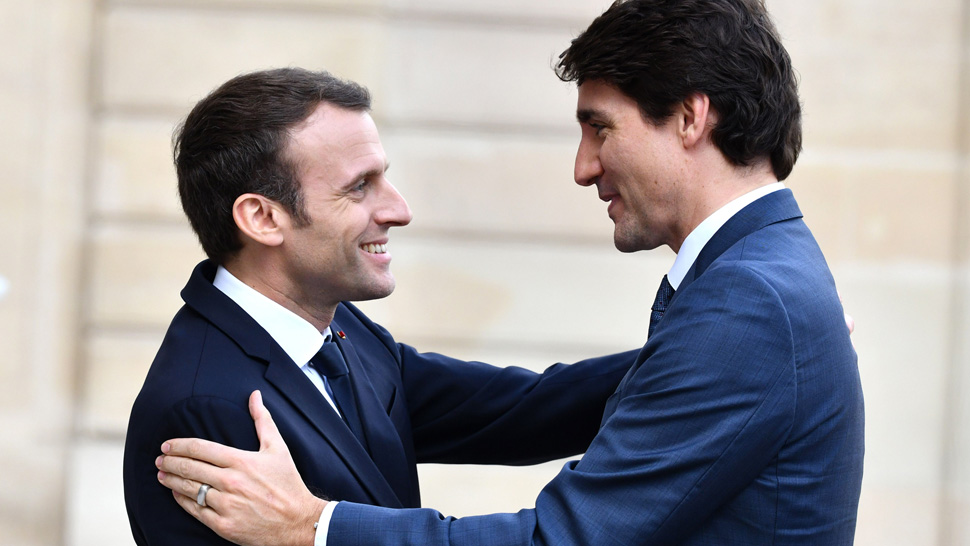 This is the most common of all the hugs. It also provides the biggest room for error. Much like how a dream is a wish your heart makes, this variation is a hug that is birthed out of love from a handshake. The handshake hug should never feel like either party is pulling on the other. When two people care about each other, a handshake should naturally turn into a hug. The hug should never linger too long, though, at the risk of you both ending up in a strange hand situation where you've impaled the handshake in what should have always been a bear hug. Additionally, a handshake hug is never full body, otherwise you have that issue of having your butt out there. A handshake hug is for friends, former classmates, and close colleagues. 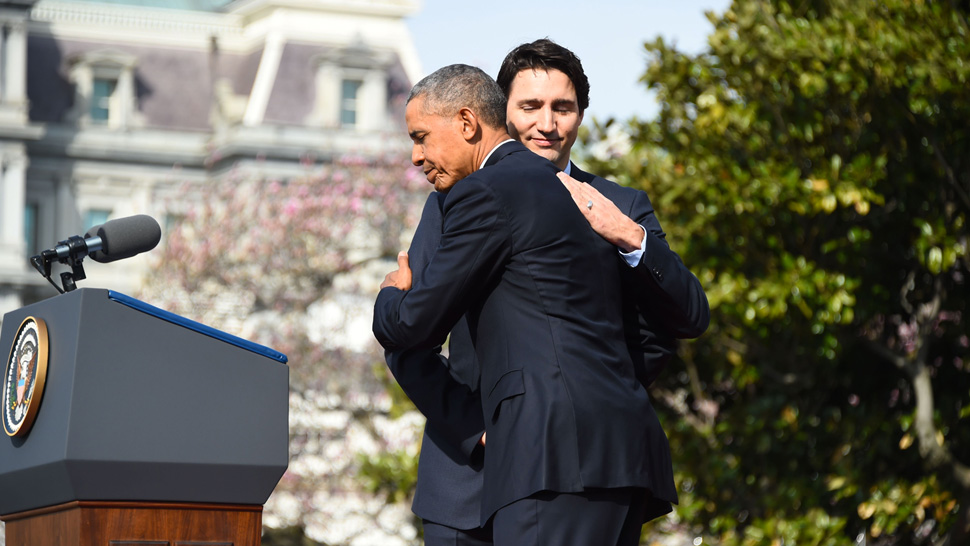 DEFAULT RESPONSE: THE SIDE HUG

A side hug is the gesture that effectively deflects awkwardness. It's a disarming way of showing affection without showing much physicality. Want to greet someone in a crowded room, but don't have space for a handshake pat? Side hug. Some might even argue that it's simply the illusion of a hug. Extend a hand behind the other person and touch the upper part of their back or right shoulder, as if to say, "I see you have space, and I'm grateful you let me into it." Do not touch the small of anyone's back unless you're in a ballroom dancing class. A side hug is for anyone you're close enough with to hug, and to avoid older aunts with a penchant for kissing. 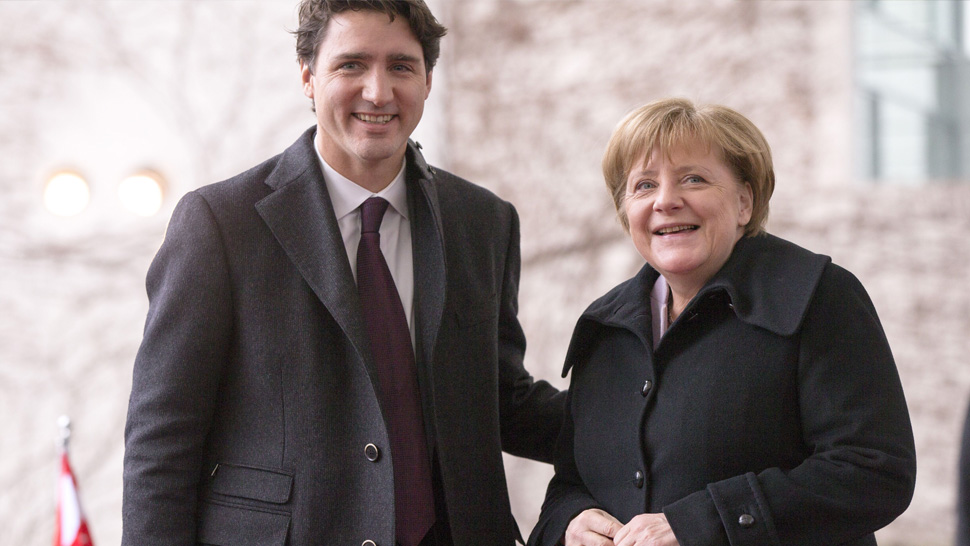 Ah yes, the bear hug. The most beautiful form of hug because when executed correctly, it's shared between two people who are down to hug and say, "Let's celebrate with a big ol' embrace." A bear hug is always two-armed, never alarming, but always aggressive. Avoid doing those weird back slaps that some people do. You are never burping the recipient of a bear hug, but instead acknowledging a moment where you're both saying, "Hey, this is a celebratory moment where we're essentially going to hold each other for a second." This should feel natural, and the awkwardness of it only dissipates if the parties are consenting. This is reserved for good family, close friends, your grandma, and drag queens at the Vancouver Pride Parade. 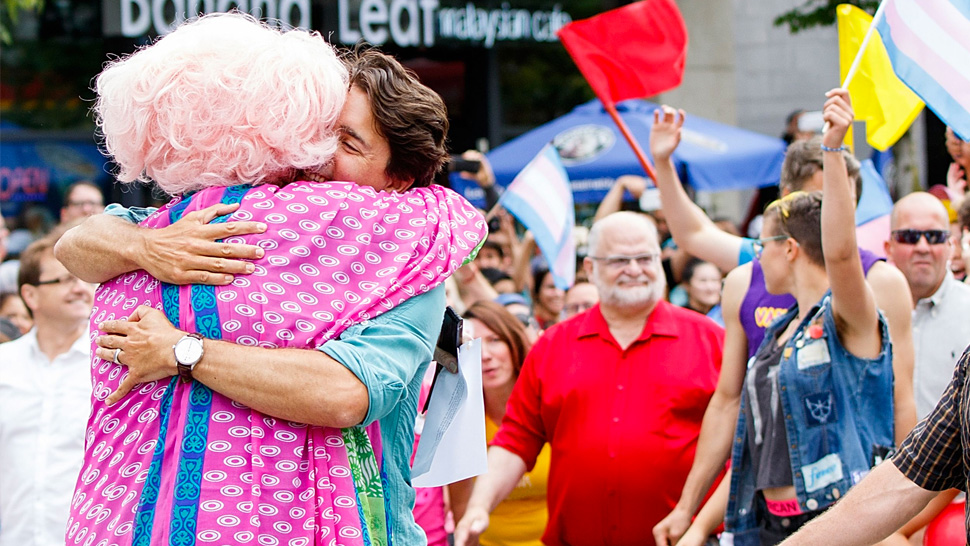