Both an athlete and a symbol of noble defiance, Muhammad Ali was a hero to men everywhere. Long after the Thrilla in Manila, and certainly long after his death, he will be remembered as the greatest. 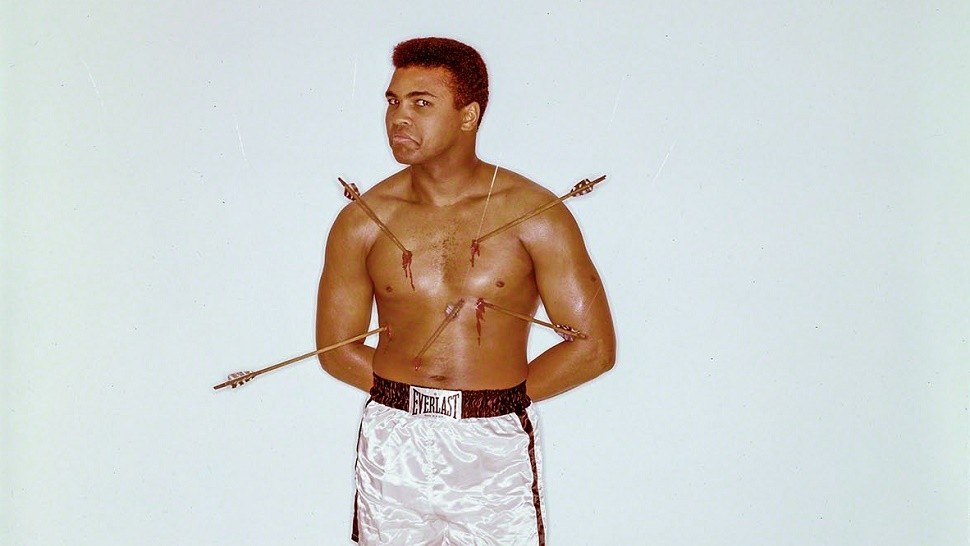 Araneta Coliseum was buzzing for four days after Muhammad Ali, the man who may very well have put Manila on the world map, passed away. Cubao usually hums with the feet of thousands shuffling, people passing by one of Quezon City’s busiest areas. But this Wednesday was a little different. There’s a basketball game to be played between Gilas Pilipinas and fancied rival Iran, with fans lining up for tickets outside the Big Dome. The surrounding coffee shops and restaurants were also packed with no room for serenity, save for one spot in front of the Green gate.

Inside a small cordoned-off square is a poster of Ali’s iconic fight against his nemesis Joe Frazier, the classic end to their trilogy called Thrilla in Manila. Flowers were laid on the ground below the poster, while a large banner loomed above in celebration of the 40th anniversary of the epic Ali-Frazier slugfest last year. A solitary man stood in front of it for a good five seconds before moving on like the rest of the crowd. And at the nearby Ali Mall, the historic edifice-slash-shopping establishment inspired by the boxing legend, a tribute filled with Thrilla memorabilia was put up in honor of the global icon. Fans, and even those who knew nothing of the man, gathered to pay their respects, with the crowd swelling over the weekend, when people flocked to the mall better known for cheap buys and cheaper thrills before its renovation. Fathers brought their children, some old enough to comprehend, others too young to remember anything past the fun in the rides just behind the gallery.

“Kaya nga Ali Mall tawag dito dahil sa kanya,” explained one dad to his bewildered and bored teenager. “Idol ‘yan ng lolo mo.” It’s curious to note that a man mentions his father in a simplistic attempt to explain the relevance of one of the world’s most iconic figures to his son. Acting like a bridge between generations and summing up the life-changing contributions of Ali in and out of the boxing ring in one word: Idol.

The kids are supposed to get that, to pay their respects to a revered figure, or at the very least politely nod, before they end the closest experience to an Ali pilgrimage for Filipinos and head to wherever they had planned to go in the first place. But bridging that generational gap takes more than a word, especially if you’re talking about a man who became such an inspiring, iconic boxer, more with his words and deeds than his fists.

Think Kanye West crossed with Floyd Mayweather Jr. in the ‘60s; except that West never yapped for anything other than his own interest and Floyd never faced his rivals in their prime.

Take for example the 1968 Esquire cover. Mention Ali, and that iconic image of the devout Muslim boxer in a photograph inspired by a Christian saint almost always pops up, mainly because it beautifully captures his essence in one shot. A man persecuted, but eventually vindicated and glorifi ed, for defi ance. But what exactly did he defy? For one, the odds he has battled in his boxing career. Time and time again, he believed in himself when no one else did; like setting a record as the youngest boxer to beat a heavyweight champ in 1963 at age 22, entering the Sonny Liston fight as the heavy 7-1 underdog. Liston never answered the bell for the seventh round, and “The Greatest” was born. (Even if the record for the youngest heavyweight champ was later broken by a 20-year-old Mike Tyson in 1986.) Ali also famously defied conventions as the loudmouth boxer who hyped up his own fi ghts in his signature provocative, free-styling manner. Think Kanye West crossed with Floyd Mayweather Jr. in the ‘60s; except that West never yapped for anything other than his own interest and Floyd never faced his rivals in their prime. Ali took on the best fighters of his era, even facing younger, stronger rivals during his advanced age.

He stood up for his faith and moral convictions, willing to waste three years of his physical prime after he was arrested, tried, and convicted of draft dodging during the Vietnam War. As Ali famously said in 1966, “I ain’t got no quarrel with them Viet Cong... They never called me nigger.” He showed no fear of being ridiculed, even when Parkinson’s disease robbed him of his gift of gab to quickly put down all comers. He almost hurt himself lighting the 1996 Olympic torch in Atlanta, but became a worldwide source of inspiration.

That old man is the Ali I know, my first memory of the man, since I was born after the boxer’s heyday: Ali, battered by Parkinson’s, struggling to keep the torch steady, but not once showing the struggle on his face.

Ali began to pique my interest at that point. I struggled to reconcile why this formerly brash, fast-talking champion boxer who was reduced to this undignified form would make my shy, humble father brag that he was there, waving to Ali, during the legendary athlete’s motorcade in 1975. There’s never been any corroborating evidence to confirm this, apart from the fact that my father moved to Manila at that time from his birthplace in South Cotabato to study in college. My mother had no idea, saying they only met in 1982. His siblings and cousins could only shrug when I asked for confi rmation.

But my father, looking sternly at his giggling eldest son ridiculing the shaking man on TV, insisted that he once got close to Ali, whom he considers the best there ever was and will be in the world of sports. It was strange because my father was a man of few words, not one fond of speakingin superlatives.

How does Ali’s braggadocio connect with a man who abhors trash-talking of any kind, more so when he sees it from his sons on the basketball court? And how could the underdog-loving Filipinos, the same people who booed him during introduction of fi ghters in the epic match inside the Big Dome, end up cheering for him and eventually embracing his greatness? (I may never find confirmation in my father’s tall tale about meeting Ali eye-to-eye, but he’s probably insisting on it now to Ali himself, wherever they both are.) Since then, I’ve devoured articles, stories, documentaries (When We Were Kings is a must-watch, in my opinion), and clips of his iconic fights and interviews. But one doesn’t really need to look beyond the Thrilla in Manila itself to find some enlightenment.

The brash Ali also once said, “It’s not bragging if you can back it up.” No other fight-apart, perhaps, from the Rumble in the Jungle in 1974 against George Foreman-shows how Ali backed his big talk more than Thrilla in Manila. Much has been written about the fight, about its historical significance to the sport and to the country in which it was held. The sheer brutality of the fight led Ali to say it was the closest thing to dying that he knows of, especially since Frazier is a man known not for throwing jabs but crushing haymakers. Yet Ali remained standing, pushing forward, fighting despite taking hundreds of hits that Frazier describes as “punches that would’ve knocked a building down.”

It’s the greatest testament to the man’s courage and conviction, his greatest attributes that he managed to apply beyond the ring and into his religious beliefs and civil rights advocacy. Without the internet and social media at the time, not many Filipinos knew what Ali fought and stood up for; what he overcame when he wasn’t in the ring. But the man many of our countrymen saw-the person who talked tough and fought tougher in the toughest fi ght in boxing history-resonated deep in the Filipino psyche, which treasures success built on hard, honest work despite enormous adversity. This legendary performance on our own soil cemented Ali’s place in the pantheon of sports greats beloved by generations of Filipinos, achieving the rarest of feats for any athlete: universal reverence.

Yet this love appears to be fading, since all affinity with anything finite gets ravaged by time. This age of endless distractions just seems to hasten the process. The world moved on to other things soon as the legend was buried. The exhibit in Ali Mall draws less than a handful a week later, and is most probably gone by the time this is out. Business as usual until the next viral event hits the screen.

Superlatives no longer bear the same weight these days, what with a new champion of the world in any sport or field staking claim as the best there ever was and is on a regular basis. And also perhaps because The Greatest is truly and finally gone.