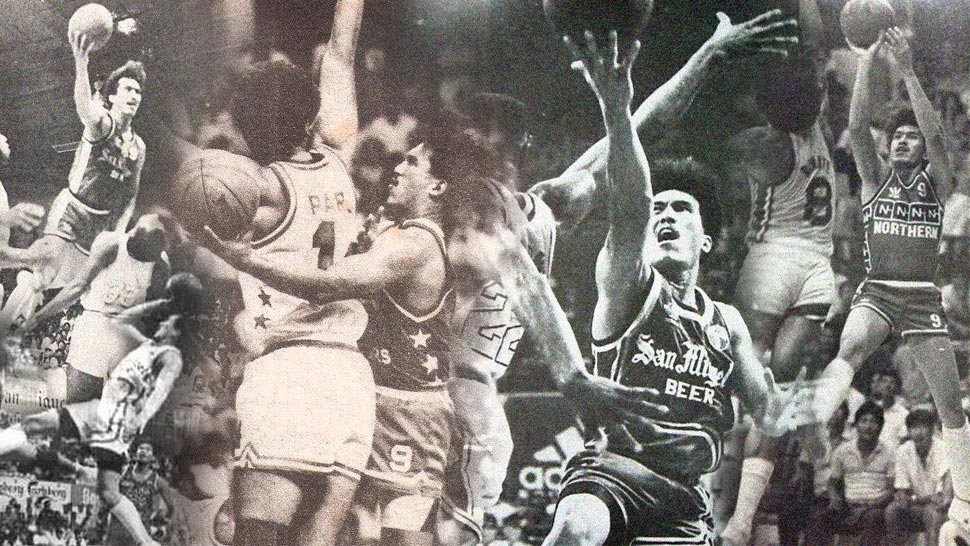 It used to be so easy rooting for Avelino "Samboy" Lim. The "Skywalker" takes off and glides with the grace of a swan in mid-flight, hanging in the air a split second longer than his defenders, just long enough to get off a basket and fish for a foul. We watch in awe and we cheer, jaws hanging.

It is no longer as easy rooting for Samboy nowadays. Not when the single basketball player who made a generation of fans believe that a Filipino can fly remains confined in a wheelchair, long after the 2014 cardiac arrest that very nearly killed him; incapable of any movement in his arms, head, body, legs.

But the few body parts that can still move offer a glimmer of hope that the mind still works. On good days, a hint of a smile breaks out in Samboy's face when friends or family whisper a happy memory in his ear; he sometimes closes his eyes deeply when asked a question, which family takes as a yes.

Those eyes, while they can no longer see, also serve as a window to the man's beautiful soul. Tears rolled down Samboy's eyes when told the news that daughter Jamie passed the Ateneo entrance exam (she eventually enrolled at UP); he still cries whenever he hears the voice of his dear Ate Coy over the phone.

Five-and-a-half years since Lim collapsed shortly after being substituted in a charity legends game at the Ynares Arena, Ate Coy, like most of us, is still trying mightily to make sense of the heartbreaking turn of events that grounded one of the most gifted and exciting athletes ever to grace the PBA hardcourt.

"I know he is trying his best to hang in there and stay alive so he can still be with us," says Samboy's US-based elder sister.

That isn't hard to believe at all, considering it was Samboy who turned 'hanging' into an art form, long before 'hangtime' became a colloquial term in basketball. On a more serious note, Samboy has always been a man for others, playing to please fans and living selflessly to make the people close to him happy.

Samboy, in my book, is the quintessential basketball hero of my generation. If you don't agree, I'm sure you'll grant that at the very least, he represented everything that is good about basketball.

Samboy was the one player I know who walked on air, yet had no ere whatsoever. Neither did he have a mean bone in his body, which was why the one time he reacted to rough tactics and actually punched someone, almost everyone dismissed it as the eighties-era equivalent of the fake news of the digital age. 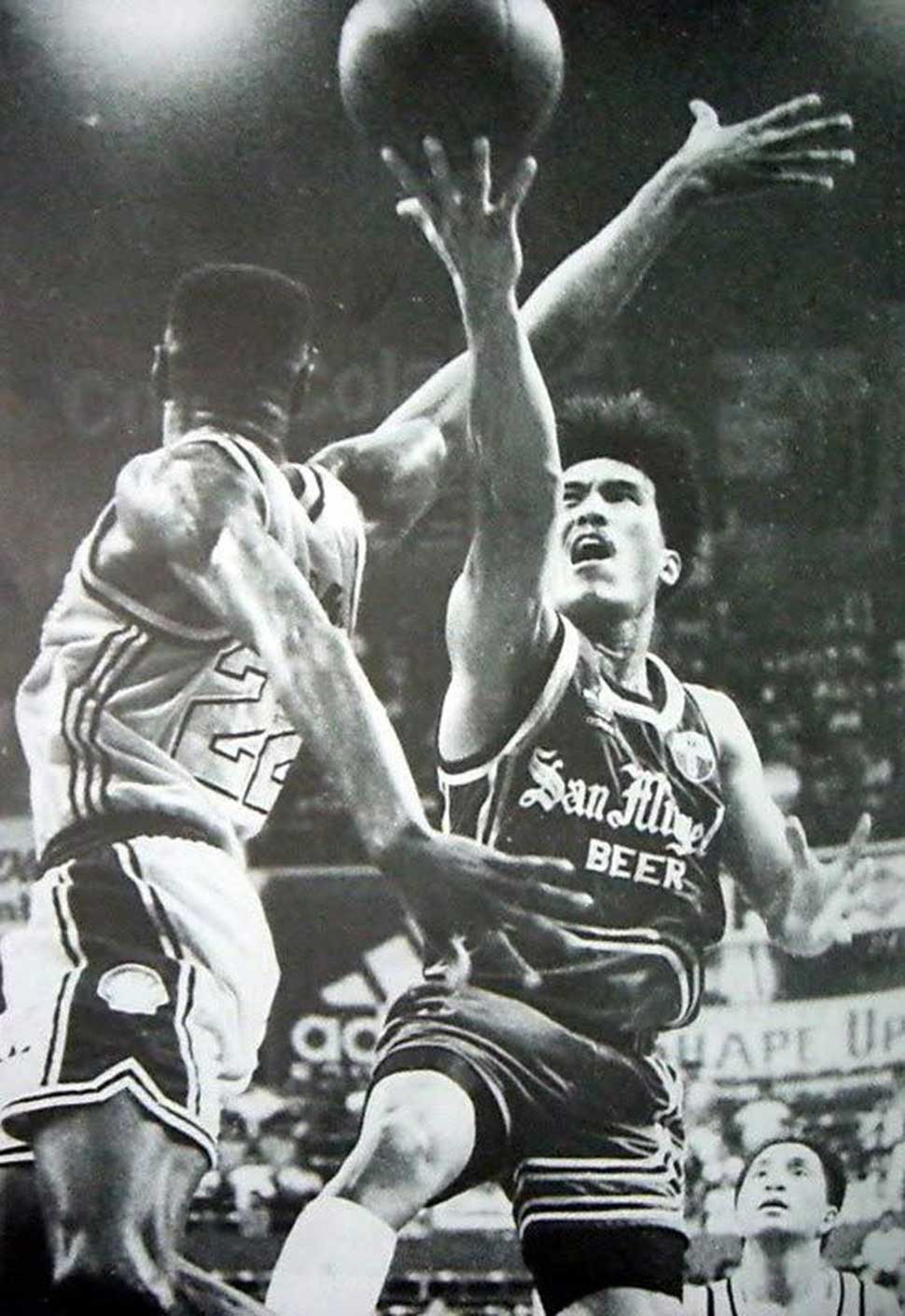 He had a killer first step and the most wicked crossover in the game which enabled him to blow past the primary defender each and every time. That only built up the crescendo as Samboy finished the play either with a fancy shot, a hangtime layup or whichever move he pulled out from his vast collection of aerial artistry.

Every Samboy basket was an event. Told and retold.

Yet he was never about shaming an opponent; he was about thrilling the fans. He never talked trash. In fact, he rarely talked. He hardly celebrated a basket—that should come of as weird for today's fans who are all too familiar with their NBA idols' signature celebration or powder-throwing pre-game routine.

But don't take my word for it. I'm biased, I must admit. I turned into a Samboy fan from the time I saw this high-flying kid in knee-high socks—a nod, I later learned, to his idol Julius 'Dr. J' Erving—star for the Letran Knights' side that won a hat-trick of NCAA championships from 1982 to 1984 under coach Larry Albano.

Event organizers weren't around yet and viewing parties weren't even a figment of a PR guy's imagination during that time, but we gathered in neighbors' homes to witness him play.

We watched in awe when he scored 37 points against an Italian team at the World Club Championship in Girona, Spain in 1985 (an oxygen mask in his face during breaks to ease the effects of asthma and sheer fatigue), and again when he starred in Northern Consolidated's famous win over a US side led by future NBA players Harold Pressley, Kenny Gattison and Joe Wolf at the 1985 Jones Cup in Taipei.

Both performances were the stuff of legend. 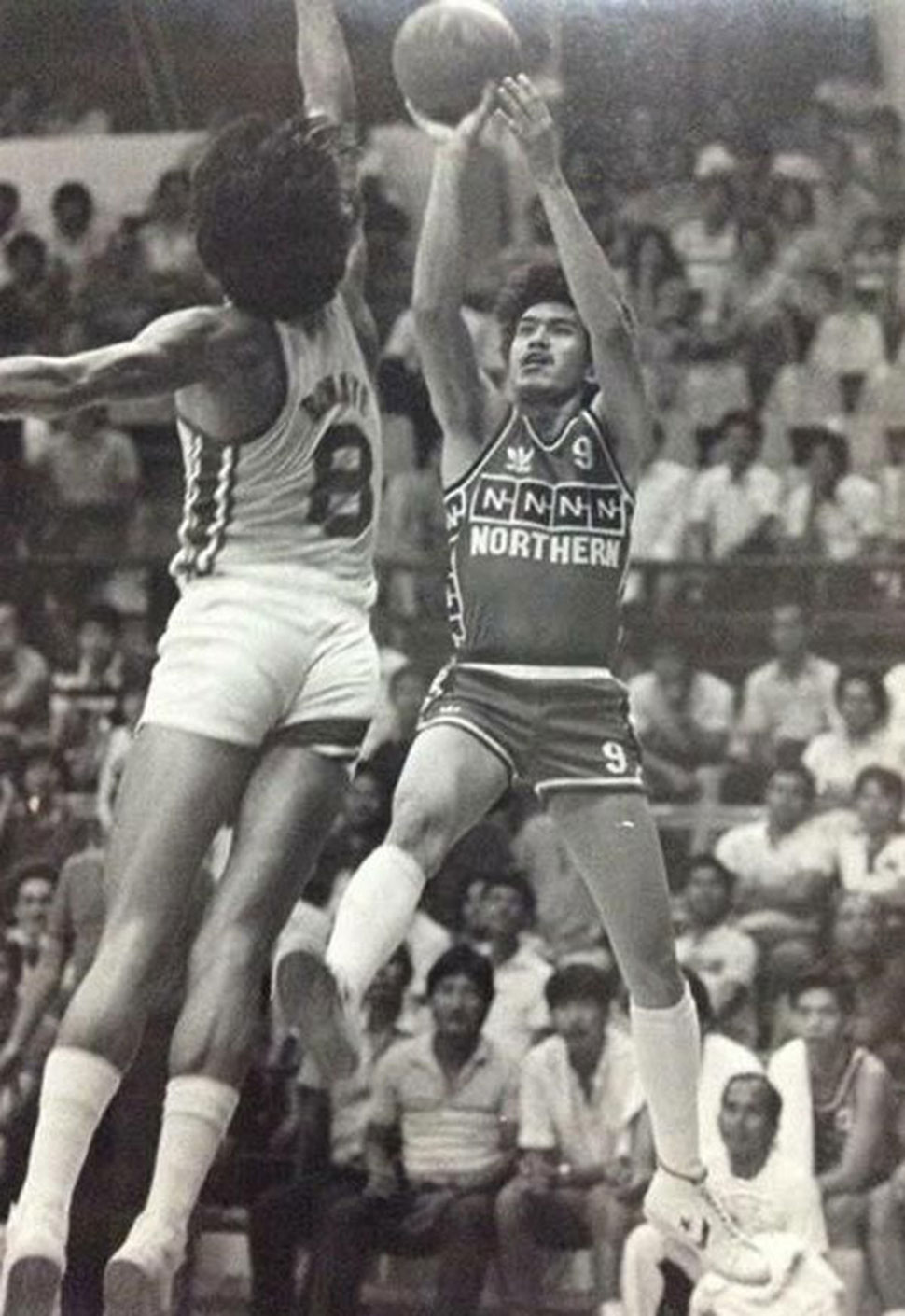 I've been a sportswriter more than half my life and if there's one thing I've learned, it is this: when you get to know athletes you so admire on a more personal level, you more often than not end up disappointed. With Samboy, it was the opposite.

I started covering the PBA as a beat writer near the tail end of Samboy's nine-year PBA career. I mostly admired him from a distance, except for two rare occasions when I dared send him an invitation. He showed up both times: once for my eldest son's first birthday, when he introduced Teejay to a lovable purple dinosaur named Barney, and for a SPIN.ph viewing party years later where he wore the biggest smile in the room. 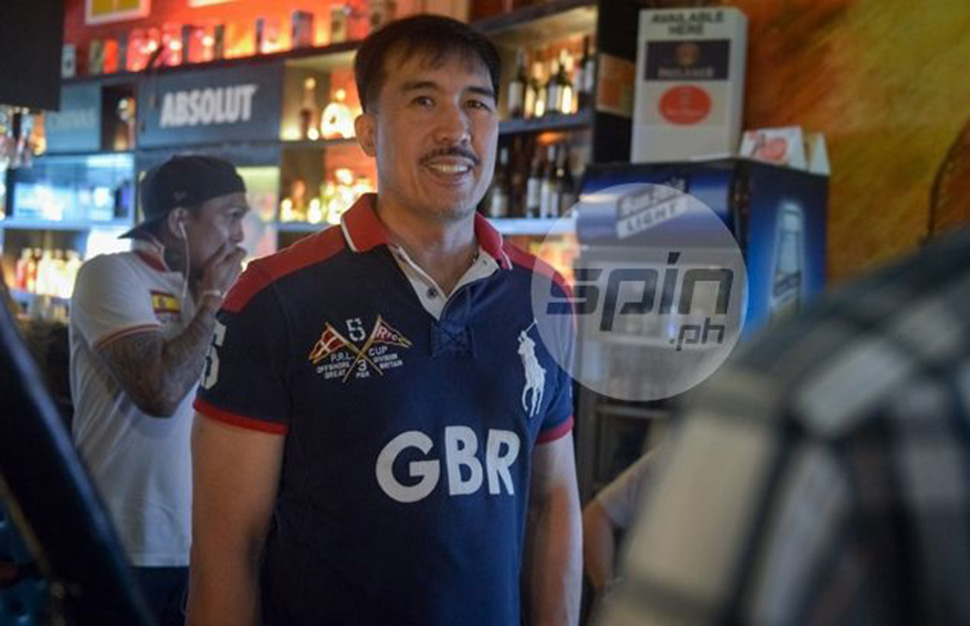 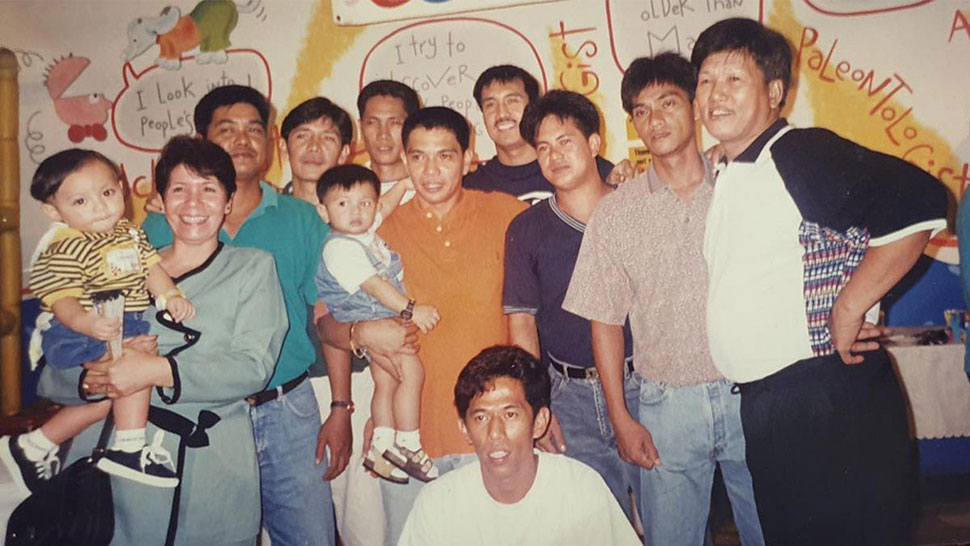 Years later, I found myself welcomed to a condo unit in the heart of Wack Wack in Mandaluyong that was converted into a hospital room where Samboy is being taken care of by a team of nurses on rotation and visiting physical therapists.

There, I was joined by his former wife Lelen Berberabe, Jamie, and a college pal who, I was happy to note, all validated what I felt about Samboy all along.

"You can't find a better person to talk about Samboy. Remember, I'm the ex-wife," says Lelen, looking me straight in the eye. "And I can tell you that Sam is one of the kindest persons you'll ever meet." 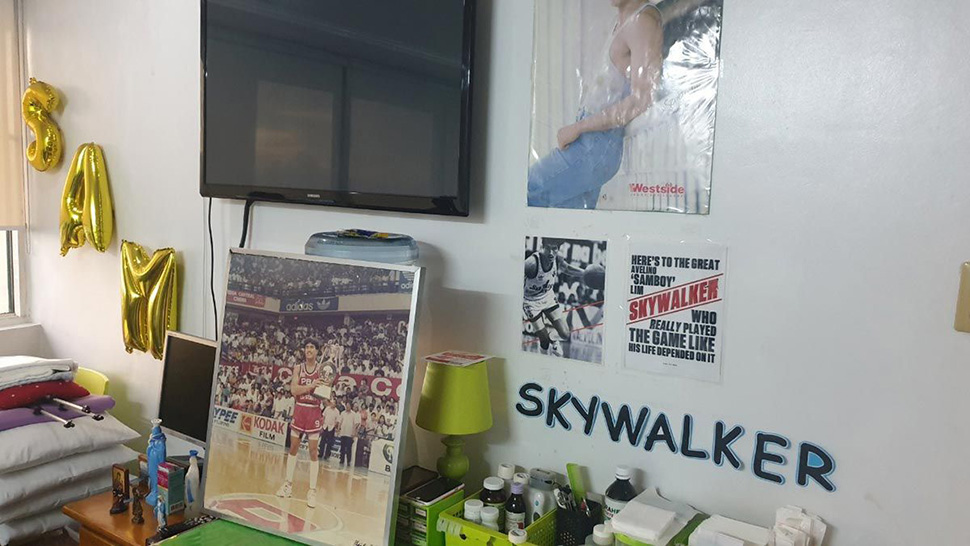 I remember walking out of that room and down the elevator to the parking lot just before dusk, my mind unsure of how long Samboy can hold on under the circumstances. But I was certain of two things. One, he was lucky to have Lelen by his side. Two, he was luckier to have Jamie carry on his legacy.

That's the Skywalker's daughter right there. 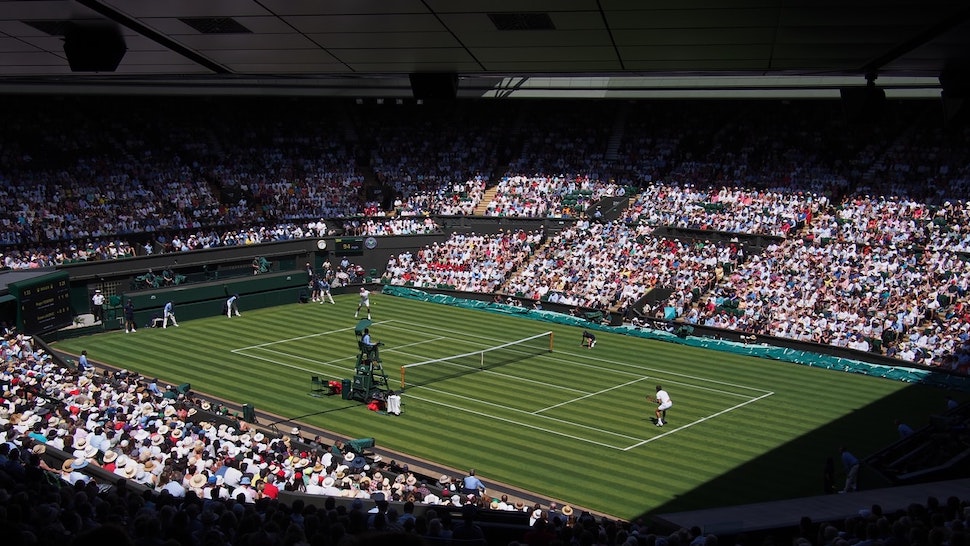 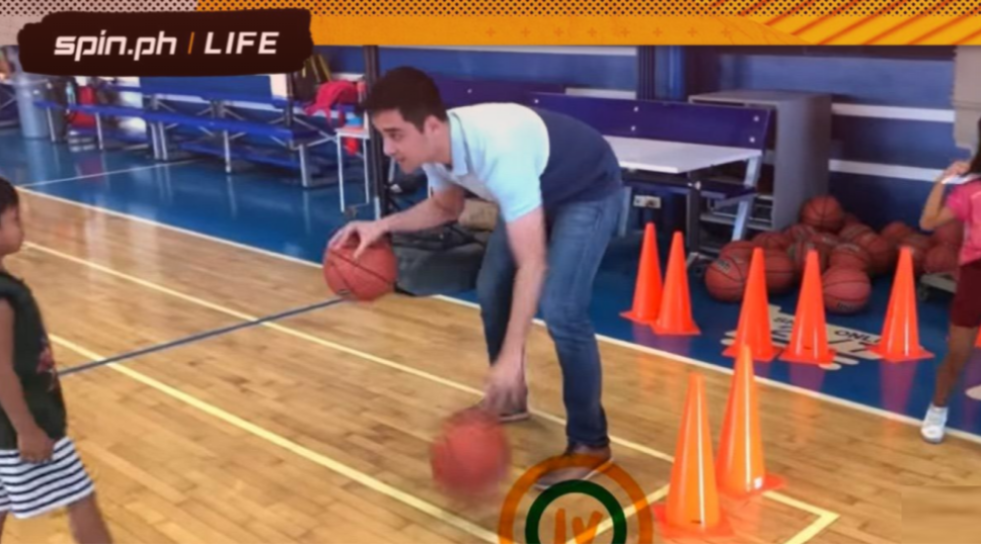