Famous for its tapas, whimsical Gaudi buildings and the FC Futbol Club, Barcelona is a magical city steeped in sunshine. 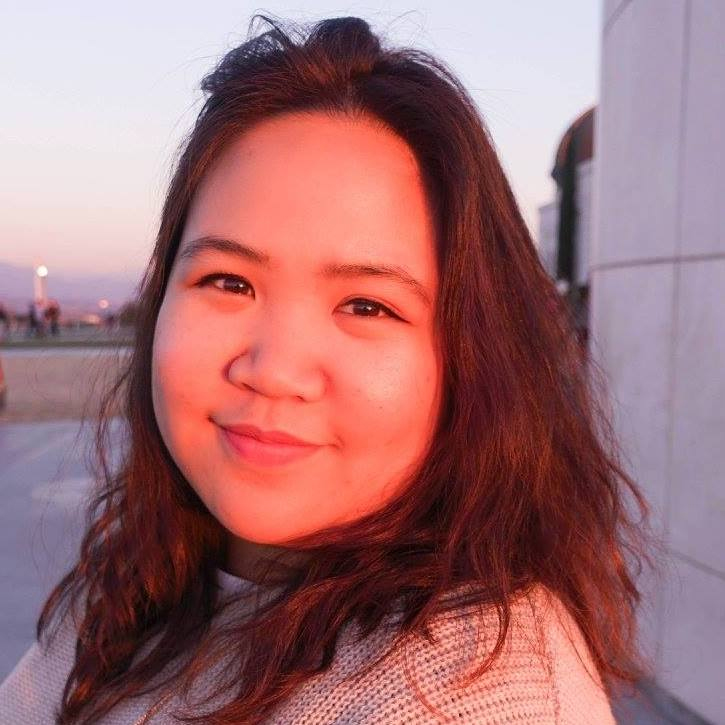 Along the coast of the Mediterranean Sea lies Barcelona, the capital of Spain’s Catalan region. Famous for its tapas, whimsical Gaudi buildings and the FC Futbol Club, Barcelona is a magical city steeped in sunshine. It would be a shame to skip this gem on your big European trip, so here’s how to make this city feel like home when you’ve only got 48 hours.

Like most European cities, Barcelona is a late riser, but that doesn’t mean it’s too early to grab yourself one of the city’s classic treats—the churro. Hit La Rambla for an early morning stroll and munch on Granja Viader’s churros con chocolate, with chocolate so thick you can drink it. The Catalan milk bar has been around since 1931, and is credited with the creation of cacaolat, a popular chocolate milk drink in Spain. It’s a short, four-minute walk from the La Rambla-Liceu station, so you have the time to take in Barcelona’s famous La Rambla street before your energizing (if decadent) breakfast.

Head back down the same metro station and alight at Passeig de Gràcia, Barcelona’s answer to the Champs Elysees. After checking out the prices at Spanish brand Zara (Pinoys swear that the prices are lower in Spain), visit Casa Batlló, a home designed by Barcelona’s most celebrated architect, Gaudí. The sea-inspired home features Instagram-worthy details, and the audioguide that comes with your ticket excellently explains the thought behind Gaudí’s design. Be sure not to miss the amazing water feature at the rooftop of the Casa, but take your time as the stairs are not for the faint of heart. 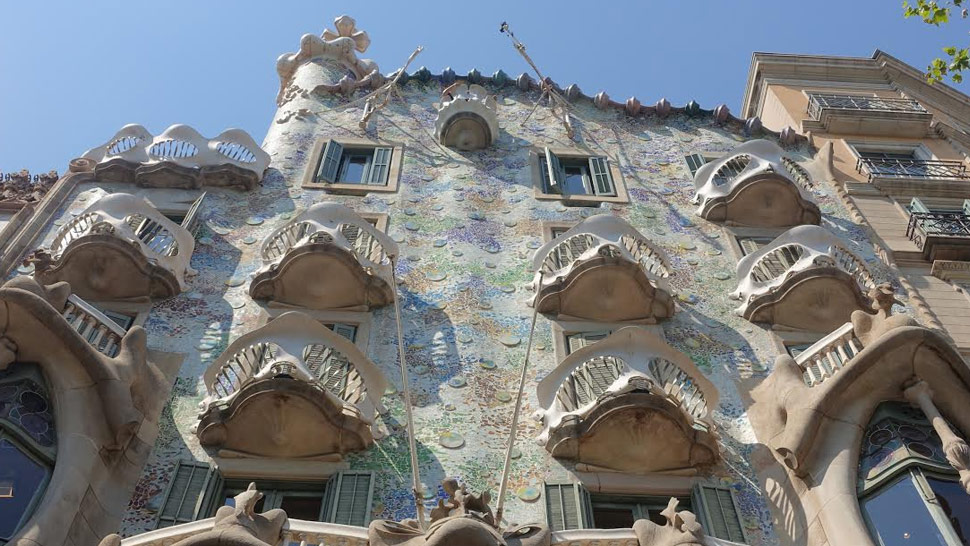 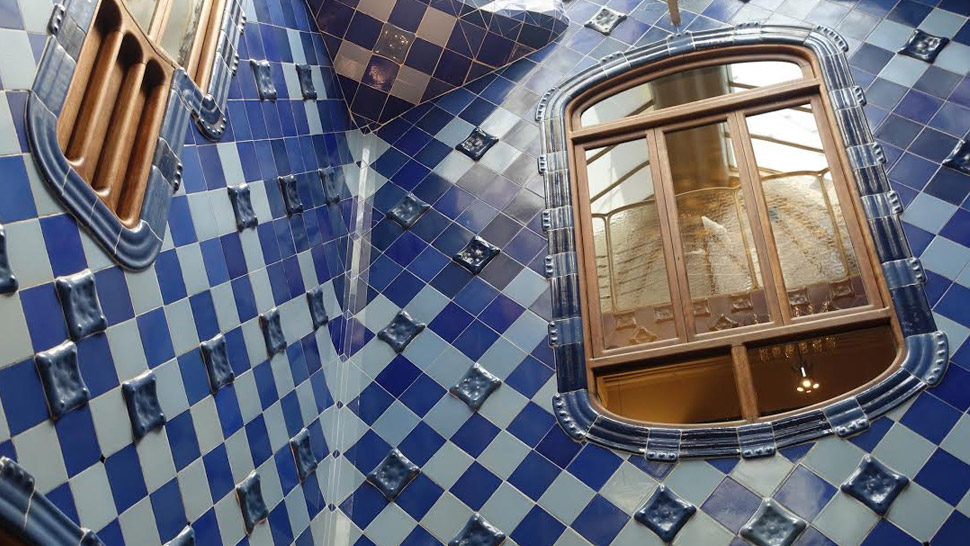 If pushing through tourists isn’t your thing, the Fundació Antoni Tàpies is nearby too. You’ll know you’re in the right building when you see a fantastic net of metal and chrome bursting out of a red brick building. This modern art museum houses the work of Antoni Tàpies, and of other modern artists. 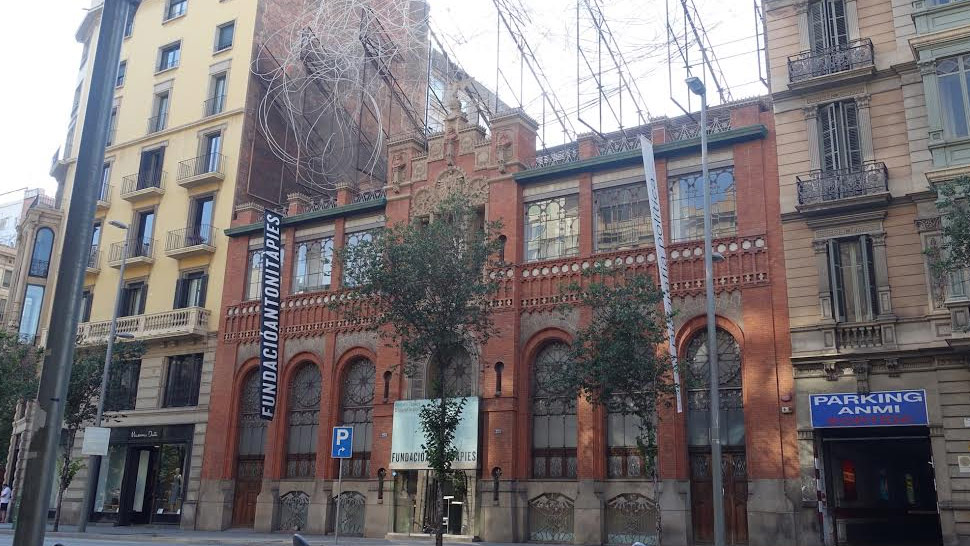 Learn about the life and works of Catalan artist Antoni Tàpies at the Fundació Antoni Tàpies. IMAGE: Carla de Guzman

2 p.m. Lunch at the Eixample District

After soaking in the art, it’s finally time to chow down. Walk down Passeig de Gràcia towards the train station again, but this time, stay on the opposite side of the road. Just after Zara Home, there is a small passageway before the restaurant Ququ that leads to El Nacional, possibly our new favorite place in the city. A former cafe-theatre, fabric dye factory, and car dealership, El Nacional was converted into a fantastic, open dining space, featuring four main restaurants specializing in different regions of Iberian cuisine, and a central tapas bar and ice cream kiosk. We highly recommend La Taperia’s Chistorra Artesana a la Sidra, the crispy potatoes and ham on the Huevos Estrellados con Jamón Ibérico, and of course, the Arroz Negro. Wash it all down with coffee and ice cream from the kiosk at the entrance. We promise you won’t be disappointed, even if your wallet is a tad lighter. 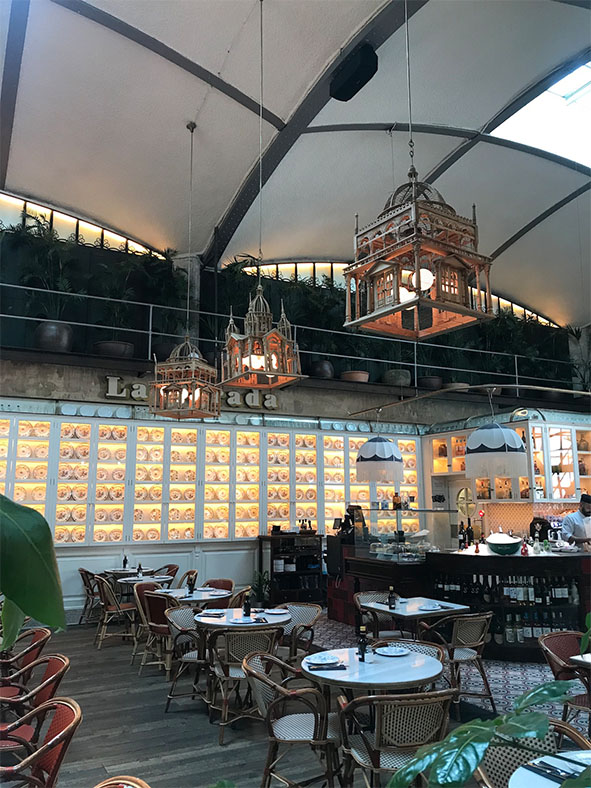 Another Gaudí? Yes, and this is the one you definitely cannot skip. Buy a ticket online to skip the line, and take the metro’s L2 line from Passeig de Gràcia station of La Sagrada Familia. The towering Church is a fantastic erection in the middle of the city, so much that when we visited it we couldn’t help but spend a few minutes outside just to stare. The still-under construction church is a beautiful play of light and structure, inspired by nature, which was always Gaudí’s inspiration. Taking cues from forests, the inside of the church is bright and airy, cool and colorful, seeped in symbols of Jesus Christ, and ultimately a creation of man in celebration of God’s work. 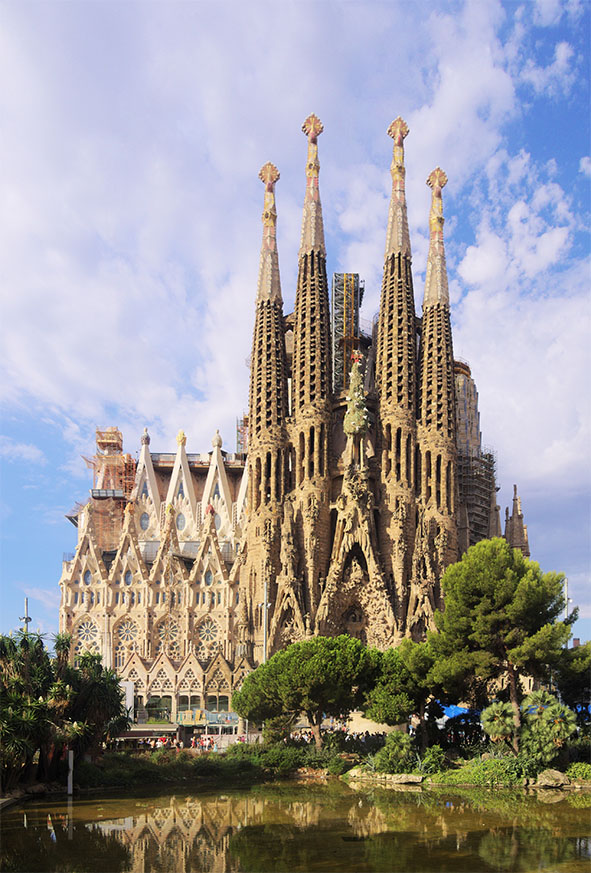 It’s been a long day, and what better way to chill than with a gorgeous view? From the Sagrada, Take the Metro back to Passeig de Gràcia, and walk to Plaça Catalunya. From the plaza, head to the building marked Viajes El Corte Inglés and head to the top floor, where you’re welcomed into a food court with a fantastic view of the city. The food court is not bad, either. We recommend having a glass of Sangria to go with your food, as the Corte Inglés’ version is sweet and refreshing.

If you were looking for a great, central place to establish as your home base for the next 48 hours, we highly recommend Casa Gracia at the very top of Passeig de Gràcia. The old bank is extremely central and easy to find, and has tons of great shops and boutiques just a stone’s throw away. 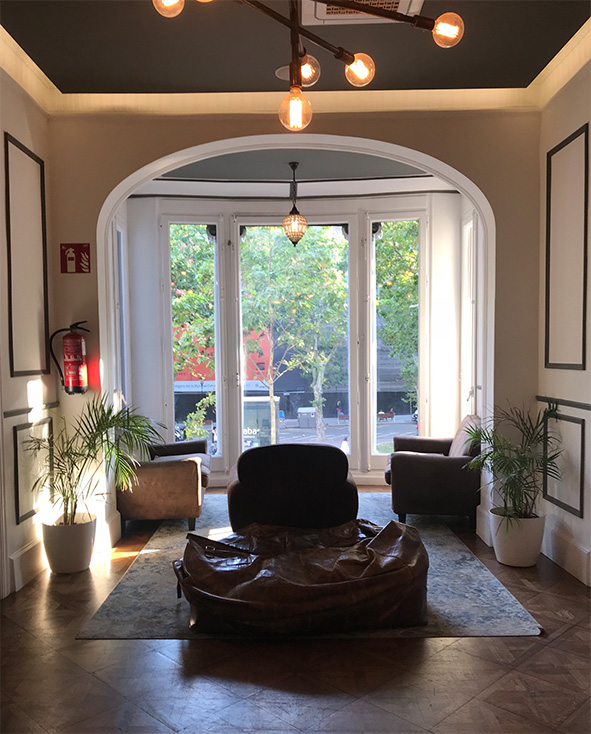 Recommending a meal at a Buenas Migas is the equivalent of recommending lunch at a Coffee Bean, but it doesn’t mean that the food isn’t a great place to have breakfast. Their focaccia breads are filling and not too pricey, and you can live happily off the eggplant parmesana. If you’re in for a hot day, order their brewed iced teas, or have a caffe con hielo. If you were staying at Casa Gracia, you’re likely to mix and mingle with the locals (and their dogs!) at the corner of Passeig de Gràcia and Carrer de Bonavista.

For those a little more judicious with their coffees, Onna Coffee has the crown for having the best coffee in the Gràcia district. A short walk from Casa Gracia on Carrer de Santa Teresa, the small coffee shop packs a punch, with their specialty brewing methods and their excellent latté freddo.

If you’re brave enough to take the bus, the 39 on Pau Claris-Mallorca stops at Pg. Picasso-Princesa. Or else, take a taxi and get dropped off at the small passageway leading to the Picasso Museum Barcelona. The museum is housed in an old medieval palace, which explains the extremely narrow streets and tall walls. Pickpockets abound in this area, so take caution.

Although photos inside the museum are not allowed, following Picasso’s journey from a trained classical painter to everyone’s favorite cubist is fascinating. Plus there’s also the fun of guessing what on earth Picasso is trying to paint. Make sure you check out his work during his famous Blue Period, and his interpretation of Diego Velázquez’s Las Meninas.

2 p.m. Wander through a music hall

From the Picasso Museum, walk through the streets to the Palau de La Música Catalana. The still active concert hall was designed in 1908 by a Catalan architect. Enter the museum on a self-guided tour, or join the ones that include a mini piano or organ recital to see the stage at work. 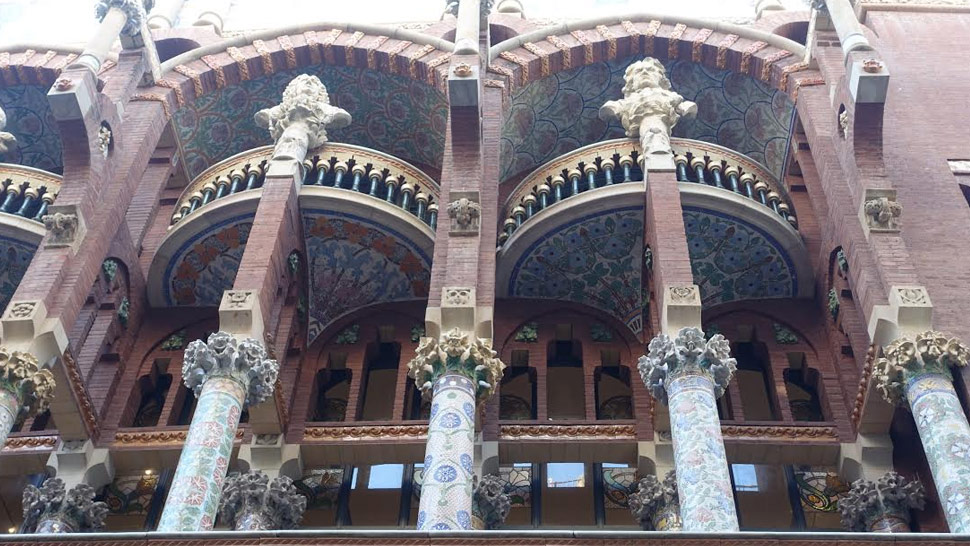 Work up an even bigger appetite by walking back to La Rambla for La Boqueria, Barcelona’s most popular food market. Weave through the crowds while munching on a paper cone full of meats and cheeses, chat with the vendors about bringing home some of the treats in sight. The merchants have vacuum-sealed packages available for their meats, meaning you can get your ham and eat it too. There are also stalls for chocolates, fruit juices and seafood that can’t be missed.

5 p.m. Chill time at the park behind the Maritime Museum

After that huge lunch/merienda, continue walking down to the end of La Rambla to the Maritime Museum, not too far from Barcelona’s beaches. The Museum’s back area features a lovely garden park with a cafe, making it the perfect place to sit and relax a little. You can also take a taxi to the beach if you wanted to check it out for yourself.

Celebrate your last night in Barcelona at one of our new favorite tapas places. From Drassanes station, take line L3 back to Passeig de Gràcia, and just a little past Lizarran lies Cervesería Catalana, one of the coolest joints in the Eixample district. It’s a popular food palce, so expect a fifteen-to-thirty-minute wait, but if you’re solo, you can grab a seat at the bar. Make sure your try their tomato bread (it comes with every meal), the deep fried camembert, Octopus and patatas bravas and the burger with foie gras(!) on top. In truth we started by ordering the foie gras, and ordered dishes as we saw them fly past us! The friendly atmosphere goes well with a glass of beer or sangria, and a lot of the waiters in this place are Filipinos, making you feel right at home.

After two whole days, what better way to end your Barcelona sojourn than to visit Gaudí’s home? The tile mosaics at Parc Güell are almost iconic in Barcelona, and we would be remiss not to add it to your itinerary. There are two areas in the park, the paid zones and the free. While the paid zone has the Gaudí work and the classic tile collages we see in every movie version of Barcelona, the free zones are lovely to walk through as well. We recommend bringing your breakfast along for a nice, leisurely breakfast. 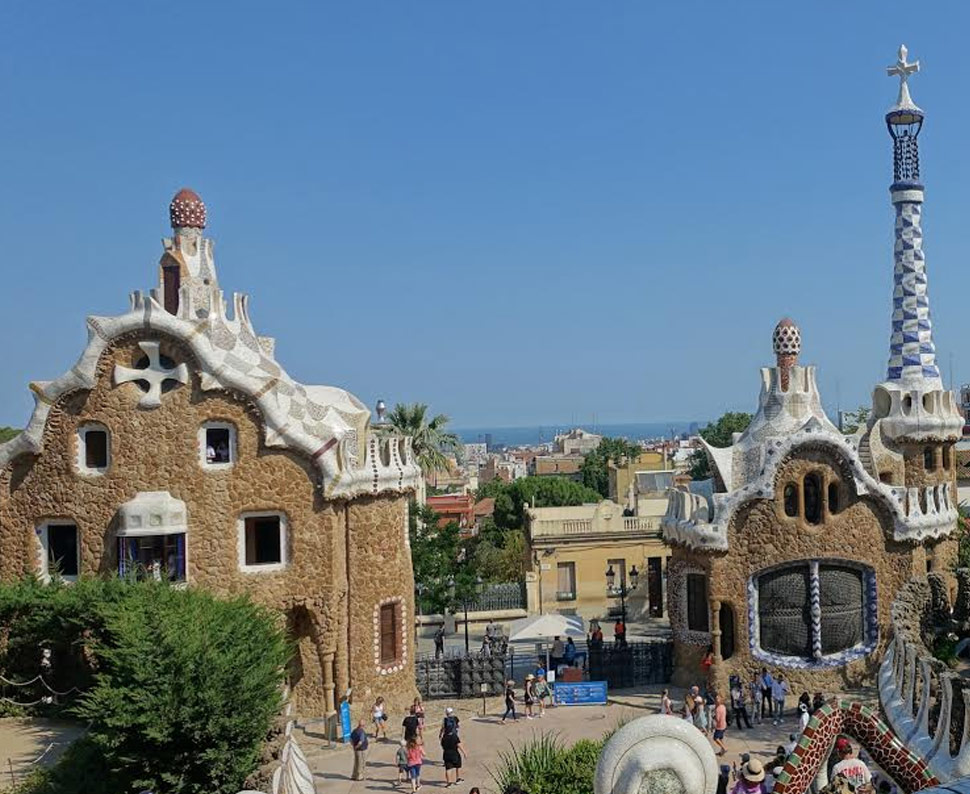 About The Author
Carla de Guzman
Carla de Guzman (@somemidnights) is the author of Cities, If The Dress and Midnights in Bali (soon with Anvil's Spark Books imprint). She likes watching TV and eating between books while tackling her giant TBR pile.
View Other Articles From Carla
Get The Latest Updates From Esquire!
Subscribe to our newsletter!
Latest Feed
Load More Articles
Esquire Money 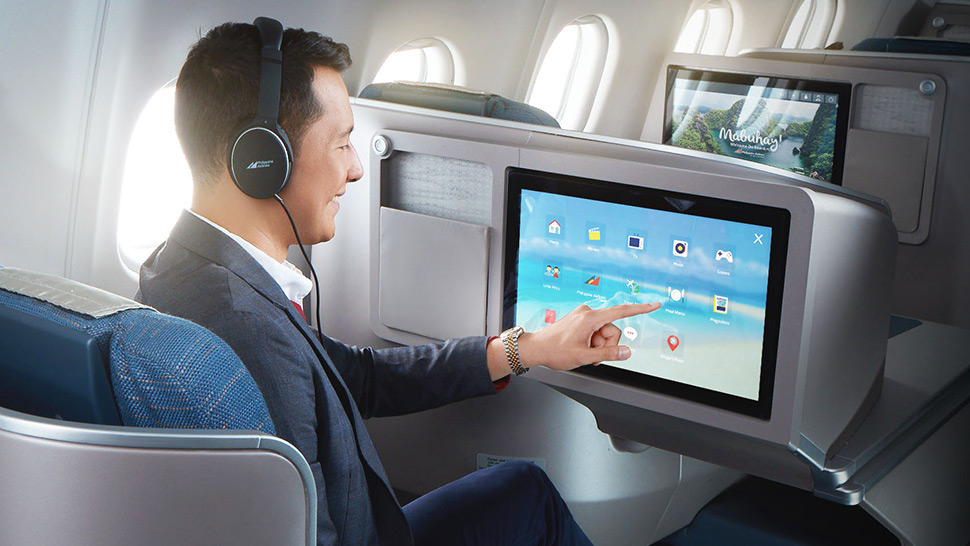 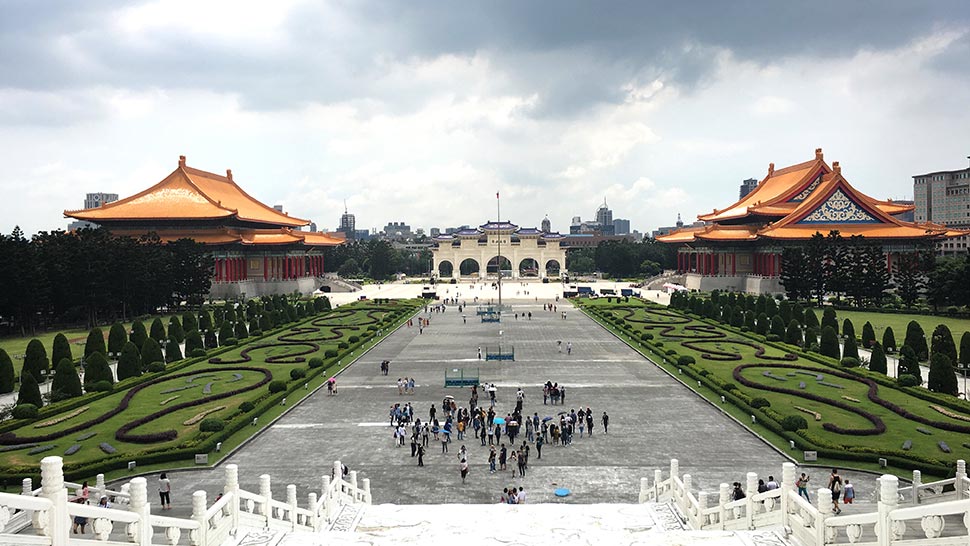 Good News: Visa-Free Entry to Taiwan Has Been Extended
All Photos
Comments
View As List