The Kapampangan murderess was only 16 when she killed her classmate in 1929.

Crimes, including those that lead to fatal consequences, happen even in civilized societies. The natural human response to these acts is one of repulsion, anger, and a call for swift retribution. But when brutal murders are committed by young people, we can only shake our heads in shock and unspeakable disbelief.

WHEN A FRIEND BECOMES A FIEND. The cold-blooded murder of Constancia Pineda (right) of Arayat, was perpetrated by her neighbor and supposed friend, Avelina Teodoro of San Fernando. Both were just 16 years old. Inspite of her youth, Avelina was meted out a life sentence.

On May 18, 1929 in Paintsville County, Kentucky, for instance, Carl Newton Mahan—just six years old—shot and killed his playmate Cecil Van Hoose with his father’s shotgun after a juvenile fight. The angelic-looking boy was tried, convicted of manslaughter, and sentenced to 15 years in a reformatory. A month after sentencing, the attorney general reviewed his case and took no action, allowing the boy to remain with his parents.

MOTHER AND KILLER SON. Carl Newton Mahan, only six years old, became the youngest murder defendant in U.S.A. in 1929, for the killing of his playmate.

Several school shootings in the U.S. were perpetrated by minors, including the Westside Middle School massacre in Arkansas, where, on March 24, 1998, 13-year-old Mitchell Johnson and 11-year-old Andrew Golden gunned down four students and a teacher and wounded 10. Just a year later, the horrific Columbine High School massacre took the lives of 12 students and one teacher after being killed by a pair of teens, Eric Harris, 18, and Dylan Klebold, 17, who committed suicide after fighting it out with the police.

You need only pore over local case files and old publications to uncover similar cases of young offenders in the Philippines. The most well-known, perhaps, is Marcial Perez aka “Baby Ama,” a convict who led the bloodiest riot in Bilibid that resulted in the death of nine inmates. He was reportedly just 16 years young when he was executed by electrocution in 1961.

TROUBLED KID. Butch Belgica led a troubled life as a teen and served time in prison for murder. He made a major turnaround and became an evangelist after getting a presidential pardon.

Then, there’s the incorrigible delinquent, 16-year-old Grepor “Butch” Belgica. On January 2, 1964, he shot and killed Armand Espina, the driver of businessman Anacleto del Rosario. Just four months later, while out on bail, he killed 17-year-old Huey Tabanda in front of Burnham Park. He served over 11 years in Muntinlupa, where he became a born-again Christian and emerged a changed man after a presidential pardon in 1976.

Going back even further, there is another gruesome murder largely forgotten by time. It happened in 1929 in the sleepy town of Arayat, Pampanga. It was bad enough that the criminal was but a teenager, but more deeply disturbing was the fact that the killer was a woman, or more accurately, a girl—Avelina Teodoro.

The December 1929 issue of Graphic Magazine has this partial account of the murder:

THE YOUNG AND THE RUTHLESS. Avelino Teodoro, 16, young murderess.

Sixteen-year old Avelina Teodoro, of San Fernando, self-confessed murderer of her classmate, Constancia Pineda, also 16 years old, broke down when the sentence sending her to prison for life was read to her. Last September, Constancia’s body was found on the grounds of the Arayat Elementary School, pierced with a score of knife wounds.

After some difficulties in the tracing of the murderer, the fingerprints on the body and the blood stains on Avelina’s clothing and books pointed to the author of the crime. At first, Avelina denied the crime, pointing to Hilario Lugtu as the murderer, but confronted with the clues discovered, she confessed to the crime.

A CASE OF BACKSTABBING. Constancia Pineda, the tragic victim, was knifed 37 times by Avelina, who belived that she spread ugly rumors about her.

What drove Avelina to kill her classmate? What was the motive? Was she really capable of murder?

An online search yielded a transcript of an appeal filed by the defendant-appellant Avelina Teodoro with the Supreme Court on August 12, 1930. The documentation carried details of the crime, as the court reviewed the sentence imposed by the Court of First Instance of Pampanga on Avelina—life imprisonment, plus P1,000 indemnity to the deceased's heirs for the crime of murder.

A case of backstabbing

It appeared Avelina indeed held a grudge against Constancia—Constancia had supposedly spread shameful rumors about Avelina and had opened her letters without permission. This, Avelina confided to Lugtu. Avelina claimed that Lugtu told her “he will take care of Constancia.”

ARAYAT ANDERSON SCHOOL. Inside the toilet of this American-founded school, Constancia was knifed to death by her murderous friend, Avelina.

Allegedly, Lugtu also asked Avelina to take Constancia to the closed Anderson Intermediate School. It was inside the toilet of the school that Constancia’s body was found with multiple stab wounds on her body.

Two witnesses, however, provided unimpeachable eyewitness accounts about the events leading to the murder. The first, Cristino Reyes, testified that on September 19, 1929, six days before the murder happened, appellant Avelina borrowed his single-edged penknife. The next day, when Reyes tried to retrieve it, Avelina claimed she had lost the knife.

When the victim’s body was autopsied by a certain Dr. Aliwalas, his report was very revealing. He found 37 wounds, caused by one instrument which "must be an ordinary single-edged penknife, with a blade about one-inch wide."

More damaging was the testimony of witness Maximo Bundoc, who saw Avelina and Constancia on the night of the murder. Bundoc was in the area as he regularly supplied pails of water to the Arayat Church.

OLD ARAYAT CHURCH. After delivering water to the church, witness Maximo Bundoc chanced upon the two girls, Avelina and Constancia, having a conversation.

He heard “the smaller girl” Constancia saying, “In this world there's no devil like one's neighbor." This, she repeated to Avelina, “the bigger girl.”

Bundoc narrated that the “bigger girl” replied: “I think so, too, myself. There’s no devil on earth like one’s neighbor, but not all of them. Haven’t you noticed that for some days I’ve been displeased with you? But after a few days, you must have seen that I was again cheerful in your company.”

Then “the smaller girl” answered, “And it is for the very reason that there’s no devil on earth like one’s neighbor, and therefore, you must not believe rumors.”

An invitation to murder

Bundoc then heard “the bigger girl” say, “I have a stomach ache,” as if to steer the conversation away from the topic. Avelina suggested to Constancia that they stop at the water closet of the Anderson Intermediate School, but the latter retorted, “That can be done at home.” Avelina, the bigger girl, succeeded in pulling Constancia into the toilet.

The witness never saw them together again, and continued his water collecting duties. A slight burst of rain forced Bundoc to wait, but when he again passed by the area, where he last saw the girls, he saw “the bigger girl” walking alone “somewhat hurriedly.” He told the court that he remembered her as the woman whom he had seen having a conversation with the small one.

This testimony of Bundoc corroborated the defendant Avelina's admission that she, herself, was with the victim on the day of the crime. It was likewise shown that a finger of the defendant's left hand had become stained with dead Constancia's blood, and that her notebook had also been stained.

To these, Avelina gave a limp explanation that she touched the victim’s wounded arm with her left hand, and that she caught up the latter’s books by mistake. Sealing the case were the bloodstains noted on Avelina’s skirt and chemise on the day that she was arrested by Chief of Police Mutuc.

The Supreme Court upheld the decision of the lower court without modifications for the crime of murder, as it was shown that the qualifying circumstance of evident premeditation was present from the start. It also upheld the imposed penalty of medium degree as fixed by the law, because the culprit was a woman—life imprisonment. The judgment appealed from was affirmed, with the costs of both instances against Avelina.

Thus ended the sad, sorry tale of the young Kapampangan murderess, Avelina Teodoro, who tried to get away with murder, but got life behind bars instead. Nobody knows what became of her, if she grew up in old age or if she died in prison or got a pardon.

Her story, as a juvenile criminal, resonates with even more relevance today, as currently, the Philippines is considering lowering the age of criminal liability from 15 years old (in accordance to the Juvenile Justice and Welfare Act of 2006) to 12 years old.

To critics, putting on trial 12-year-olds as adults is too draconian a move. The “age of innocence” so long associated with children is no more.

Butch Belgica, from the Philippine Free Press, May 1963.

View More Articles About:
crime
More Videos You Can Watch 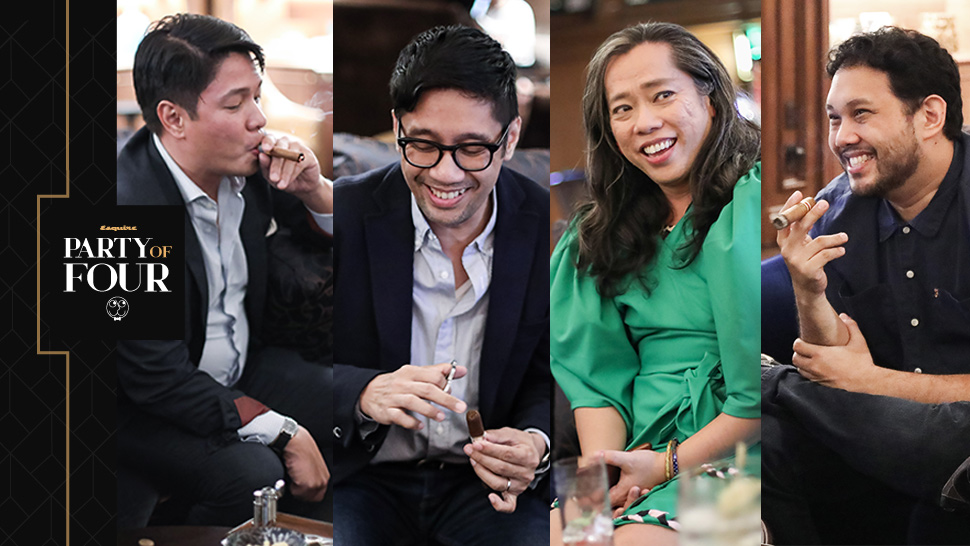 Esquire Party of Four: The Inaugural Circle
All Photos
Comments
View As List