This is the amazing tale of a soldier, an appendix, and a spontaneous self-surgery.

Strange things have happened in Philippine jungles. For one, a Japanese World War II soldier named Hiroo Onoda decided to hide in the jungles of Mindoro—for 29 years—to avoid getting captured by the enemy. While he found the wild jungle cozy enough to live in, it’s hardly the most sanitary place to perform emergency surgery—on yourself, no less. That’s exactly what happened to an Australian soldier by the name of Robert Kerr “Jock” McLaren who had his own adventures in the Philippines jungles, hundreds of miles south of Mindoro in Mindanao.

In the same year Onoda started his jungle holdout in Mindoro, McLaren’s epic appendix tale in Mindanao began. Prior to landing in the Philippines, the Scottish-born soldier had escaped a Japanese prison, not once, but twice, in Japan-occupied British Malaya. His second escape involved a ragtag group of prisoners of war, a hollowed-out log, and 270 miles of the open sea. From Berhala Island in northeastern Borneo, McLaren sailed on a makeshift boat all the way to Tawi-Tawi, where he joined a group of Filipino and Australian guerilla fighters in Mindanao. There, he became a respected leader who helped both Filipino guerilla forces and the American army defend against the Japanese.

After the war, McLaren returned to Berhala Island, where he escaped imprisonment.

But his two miraculous escapes and voyage across the ocean didn’t prepare him from the worst of his adventure: a ruptured appendix. If you’ve experienced a ruptured appendix, then you know the pain is a special type of hell. But unlike us, McLaren didn’t have an emergency room full of nurses and doctors to take care of him. In the middle of Mindanao jungles, the guerilla soldier only had a mirror and a knife.

Luckily for him, McLaren was a trained veterinarian prior to the war. While a dog is hardly the same as a human, theoretically, he knew what to do. And so McLaren had to cut himself open, reach into his insides, snip off his appendix, and sew himself shut.

“I knew I had appendicitis and that if I did not do something, I would die,” said McLaren to The Argus, a Melbourne newspaper, on January 15, 1948. “With the aid of a mirror and an ordinary knife, I took out the appendix. The operation took four and a half hours.”

Four and a half hours of self-surgery—without anesthesia and with only a mirror, a knife, and a bunch of guerilla fighters and locals looking on at the live procedure happening in the middle of the jungle. The Argus reported that a local doctor/healer helped him through the self-operation. 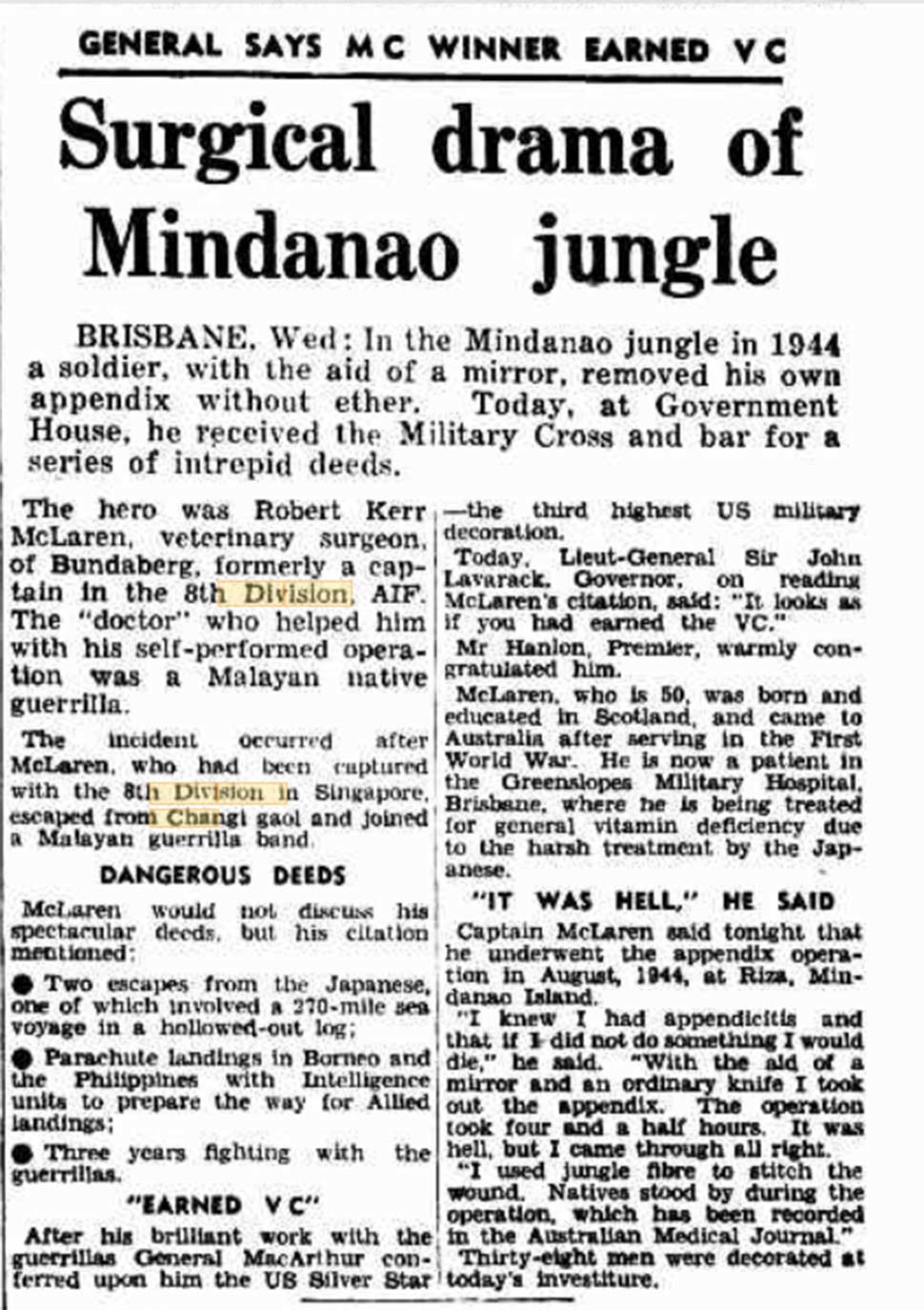 “It was hell, but I came through all right. I used jungle fiber to stitch the wound,” explained McLaren. We can only guess what “jungle fiber” he’s referring to. Perhaps thin strips of banana leaves?  “Natives stood by during the operation, which has been recorded in the Australian Medical Journal,” he said.

Despite all odds, the spontaneous self-surgery worked and McLaren was back to business, parachuting in the Philippines and Borneo for intelligence missions. All in a day’s work.

For escaping capture twice, sailing from Borneo to Tawi-Tawi on a hollowed-out log, defending the Philippines alongside guerillas, parachuting in Japanese territory for an intelligence mission, and cutting out his appendix in the middle of the Mindanaoan jungle, McLaren was awarded a U.S. Silver Star by General Douglas MacArthur and a Military Cross and bar by Australia’s government for his “series of intrepid deeds.”

Now that's a real war story to tell the grandkids.

Before He Was Roasting Celebrities at the Golden Globes, Ricky Gervais Was an ’80s Philippine Pop Star